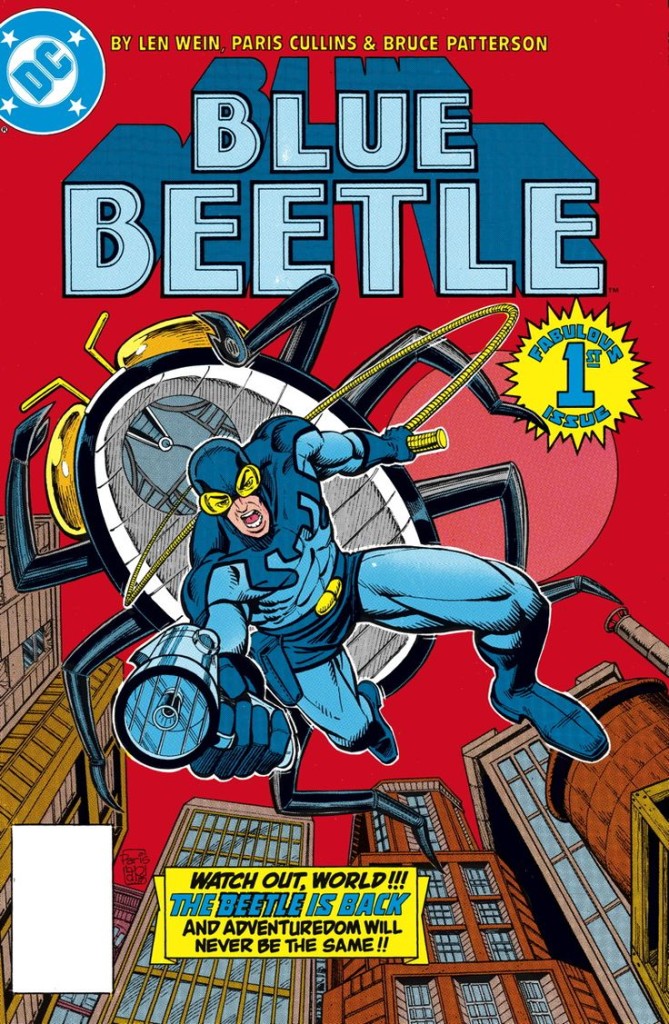 I have, in the last few months, become oddly obsessed with the ways in which DC’s comics are featuring obvious Marvel analogs, particularly when Scott Lobdell is involved in some way. His current Doomed series is particularly Spider-Man-esque (in a good way, I hasten to add), and the main Convergence series, which he co-wrote the opening and closing issues of, featured Telos and Brainiac recast as the Silver Surfer and Galactus. His recent Superman run also featured Oracle, who was not un-Watcher-esque.

It was, to be honest, somewhat distracting — I found myself wondering if it was subconscious, or a deliberate series of tweaks at concepts and character dynamics that Marvel itself seemed disinterested in using right now — and perhaps put me unfairly off Lobdell’s work to an extent. Reading Showcase Presents: Blue Beetle Vol. 1 this weekend, however, I realized that Lobdell was merely just continuing a tradition that has been going strong over there for decades now.

Blue Beetle — written, for the entirety of its 1980s DC run, by Len Wein, with art by Paris Cullins and Ross Andru, for the most part — was the 1980s incarnation of “DC’s Spider-Man.” Somehow, when I read the series originally, that entirely passed me by (Perhaps because I was 11 and didn’t think about things like that?), but re-reading the issues now, it practically leaps off the page: it’s got everything that you’d expect from a 1970s/1980s Spider-Man comic, from the quippy hero (who also happens to be insect-inspired, and refer to himself in the third person in thought balloons for no immediately apparent reason) to the problematic relationship with law enforcement and complicated love life, while also folding in an extended supporting cast, all with their own melodramatic connections to costumed menaces for our hero to fight.

It’s a formula that DC has returned to again and again in an attempt to find its own version of the character that was, at the time, Marvel’s flagship character. As always, there was a twist — this was “What if Peter Parker was also a genius with his own company to hold down” (A twist that’s since become central to Marvel’s Spider-Man under Dan Slott, weirdly enough; there are scenes in Blue Beetle where the character has to sneak into his own offices that are surprisingly similar to scenes in recent Amazing Spider-Man issues), whereas Firestorm was “What if Peter Parker was the bully, and the hero was Flash Thompson?” and Static was pretty much “What if Peter Parker was black?” — but the sense that you’re reading Spider-Man throughout these issues isn’t something that goes away. His costume might be different, and he might have a massive flying bug to patrol the city in, but deep down? Peter Parker all the way.

Maybe more surprising is the fact that, really, these are some pretty solid Spider-Man stories when it comes down to it. Len Wein, bless him, always has been one of those writers who can do meat-and-potatoes superheroics in an utterly dependable fashion and if there are no particularly jaw-dropping, stand-out issues on display in the 24-issue run, it’s always fast-paced, charming-enough fun that definitely isn’t a chore to read, despite some almost Claremontian accent work. “Ah don’t wanna fight yuh, fella — but ah got no choice!” indeed.

(Actually, dammit, the sheer corniness of the book is part of its charm. Wein throws things into the book that no-one would dare attempt unironically here, and I’d be lying if I said that it didn’t make me long for more dumb sincerity in today’s superheroes: when was the last time we really saw the reveal of a mystery villain where he turned out to be exactly who you suspected, because there were literally no other suspects introduced in that storyline? Why don’t supporting characters have inner monologues that are essentially I don’t want to — but I must! on a regular basis anymore?)

It helps that more than half the first year is essentially Blue Beetle Team-Up, with a three-part Question story, a three-part Teen Titans story and two Legends crossovers in the first thirteen issues. The second year isn’t nearly as packed with guest-stars — only two issues of Millennium — but all of the subplots that have been brewing slowly, almost ridiculously so in a couple of cases, come to a head, which stands in for the thrill of nostalgia and “Hey! It’s [Insert Character X Here]!” feelings. If you make it through the first year, momentum and curiosity will keep you going through the back half of the book.

A big help in terms of appeal for more than half the series is Paris Cullins’ artwork, which is chunky and cartoonish in the best ways, like someone showed Kirby a lot of 1970s manga and then added some Steve Ditko into the DNA at the last moment; although the inks aren’t always as supportive as they could be — although nowhere near as bad as Ross Andru being paired with Danny Bulanadi in the last third of the book; Andru’s pencils needed someone with a less overwhelming line, dammit — there’s an unmistakable energy to the art that made me wonder whatever happened to Cullins in later years (The answer might surprise you).

All of this sound like I’m damning with faint praise, and I guess I am; Showcase Presents: Blue Beetle isn’t a book that anyone but the most hardcore fans would claim to be a lost classic. Instead, it’s a reminder of what mid-level superhero books were, back in the day, and what they wanted to be (namely, The Amazing Spider-Man) — and, in some strange way, how that utter lack of ambition proves to be oddly acceptable, and even refreshingly enjoyable, decades after the fact. Would I recommend this book to anyone? Not in the slightest, but if you find yourself jonesing for some perfectly competent 1979 Spider-Man that you’ve never read, even though you’ve actually read every Spider-Man comic ever made, this really might be exactly what you’ve been longing for all along.

Now, if only DC would wise up and publish Showcase Presents: Blue Devil…

(That I managed to get through all of this without pointing out the obvious — that Steve Ditko also created the Blue Beetle — can only be seen as a testament to my forgetfulness. Also gone unmentioned until now: there’s a sequence in #2 of the series that is pretty much a shamelessly direct lift from the iconic “Spidey frees himself from the rubble” sequence in this issue. This was not an accidentally Spider-Man-y comic.)

5 comments on “Your Friendly Insect-Related Superhero From The Other Neighborhood: Graeme Gets Buggy For The 1980s Blue Beetle”