At some point in its development process, I can only assume that Before Watchmen: Comedian seemed not only like a good idea, but a coherent one. Despite the final product, I have to believe there was some point where Brian Azzarello was explaining his story to the editors and executives and managed to make it sound as if there was a through line where actions had consequences and there was character development that seemed to make sense as Eddie Blake went from best friends to the Kennedys to Vietnam and back, as hard as it seems. It’s just that the comic makes it so hard to do so.

In theory, Comedian is a six issue series about… Blake’s increasing disillusionment with the world, I guess…? I’m trying to come up with some kind of order to impose on the astoundingly meandering, formless, repetitive story that Azzarello provides in this series, but that might be pointless — or, indeed, missing Azzarello’s point. Perhaps — to be generous — the shapelessness, the flab and the lack of direction is intentional, a lesson in just how chaotic and meaningless the world really is as if nihilism can be communicated via formalist play. (Spoilers: It can’t, and that reading is astonishingly generous, to the point of being laughably wrongheaded.) 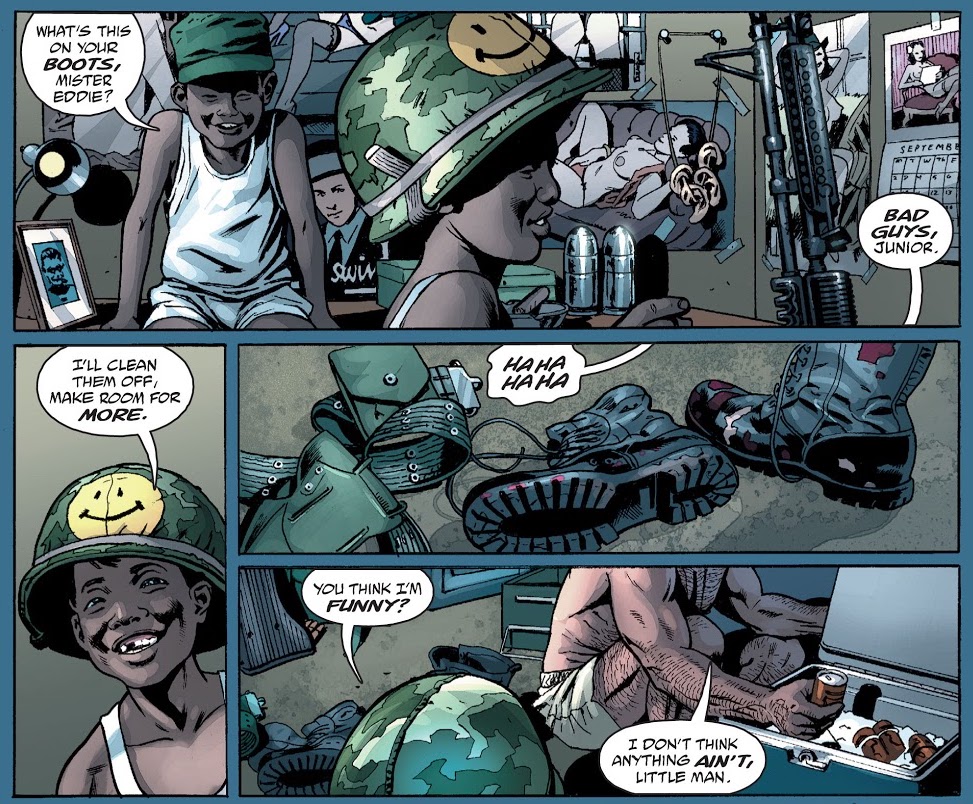 In reality, Comedian is a series flooded by Azzarello’s flop sweat, informed by a clear sense that he thinks he’s writing something important. For all of his regular tics — Azzarello cannot avoid shitty wordplay if his life depended on it, I suspect, and he loves to run dialogue across panels via em dashes, with the last word appearing on the subsequent panel and/or page — this is something that feels as if it’s constantly trying too hard to be meaningly and making a statement, with each attempt coming across as forced and unsuccessful.

In many ways, it’s a How To guide of what not to do in similar circumstances:

I can’t stress that last point enough. Of all the Before Watchmen projects, Comedian is the one that seems to have no actual character arc or narrative drive; things just happen and the Comedian grins his way through them being a bad ass that’s idolized by the comic. For all the characters who pay lip service to the fact that Eddie Blake is, for all intents and purposes, a violent sociopath as likely to undermine the status quo as he is to defend it, the comic itself can’t help but swoon in his presence: Men want to be him! Women want to be with him! And, sure, he’s given to acting completely irrationally and spouting nihilistic platitudes, but in this particular comic, that’s pretty much true of every single character, so… there’s that, I guess…? 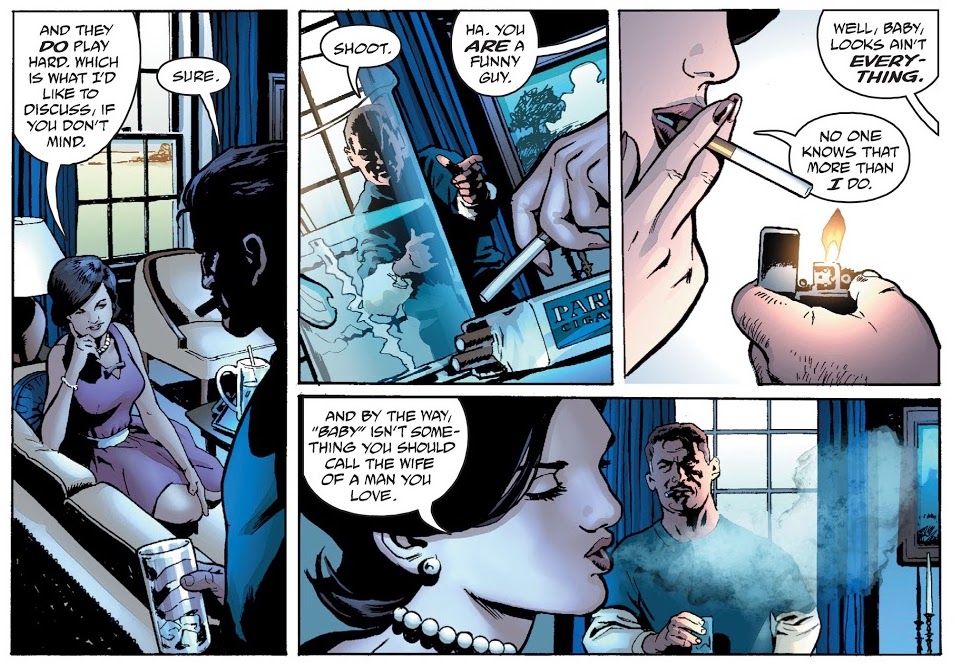 In light of Azzarello’s failure, it would be great to report that J.G. Jones steps up and saves the series with some great artwork, but it wouldn’t be true. Admittedly, he’s not helped by some garish colors by Alex Sinclair — who I honestly feel is one of the most overrated colorists in comics; his palette always feels too on the nose and lacking in subtlety, with some panels here in particular suffering from genuinely breathtakingly loud gradients — but all of Jones’ flaws are on show here: his characters feel like posed mannequins, with no dynamism or movement present whatsoever. No texture, either, but that’s something that can be said of everything in Jones’ artwork: the eye glosses over everything as if it’s all been formed out of the same sheet of plastic just seconds before you see it. When half of your comic takes place in the middle of the Vietnam War, and it looks pretty much the same as the urban U.S. scenes elsewhere, or the scenes on a beach in Hawaii, I feel something is off in your artwork. Maybe that’s just me.

At one point — the aforementioned Hawaii scene — I thought to myself that Comedian feels like a shitty James Bond movie. It’s the ease of the violence, the fetishization of those who supply it, and the shitty puns that put that thought in my head. (“So what do you want to do?” says a sultry woman to Blake in the scene, and he responds, “Lei you.” But it gets worse; “You gotta rubber?” she asks, to which he responds, “A rubber? Hell no… I’m all the protection I need.” Get it? Do you fucking get it?) But i’m wrong, of course. With the lack of plot and the obsession with celebrity cameos, there’s another movie that works as a far better comparison. Somehow, despite the fact that no-one could have wanted this, Comedian is nothing as much as the Zelig of Before Watchmen. Now there is a recommendation they’ll stick on the reissue. 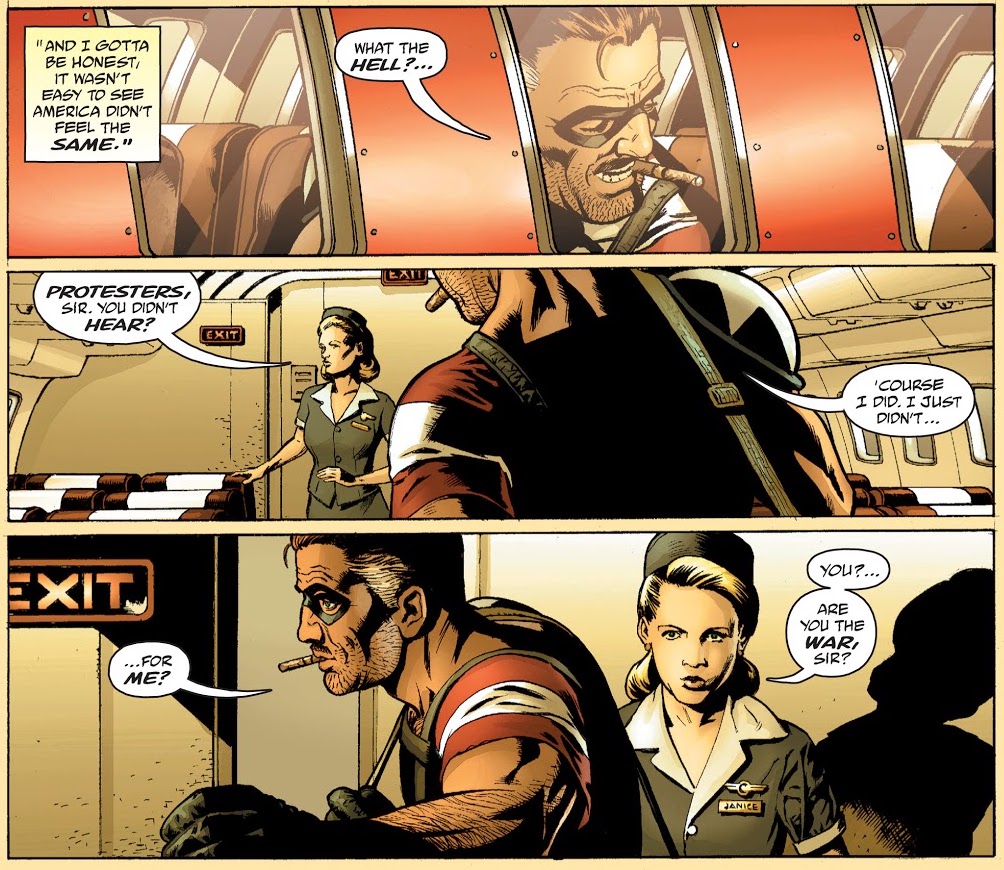 2 comments on “Wait, Watchmen 5: What It Is Ain’t Exactly Clear”