Previously on Baxter Building: With #125, Fantastic Four permanently lost both of its creators. Yes, almost two years after Jack Kirby jumped ship, Stan Lee also moved on after proving that he really couldn’t bring the series back to its glory days by re-hashing old storylines and ideas. Now, it’s up to a new generation to try and live up to what’s gone before.. by re-hashing old storylines and ideas. We’re doomed, aren’t we?

0:00:00-0:8:30: Jeff and I talk about the issues that we’re covering this episode — Fantastic Four #126-133 — and also express more than a little displeasure about the fact that this is actually the second time we’re having to record this episode, thanks to the technical difficulties that ate the first attempt. In fact, consider the non-“Happy Birthday” segment of this clip the unofficial theme song of the episode:

It would help if the issues were really good, but they’re not, and we talk about that as well: the ways in which we’re fully entering the era of “Fantastic Four as cover band,” and also why what would be our natural dismissive tendencies towards that is blunted by our own nostalgia for this stuff, having read it as kids. 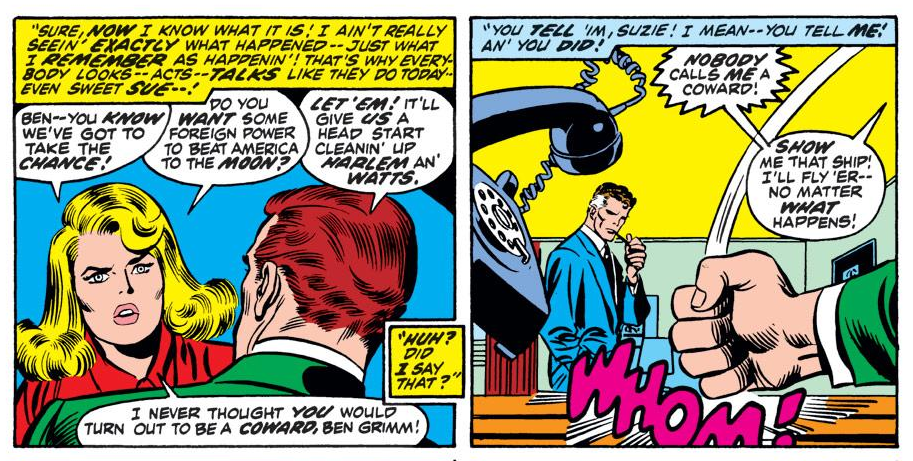 0:08:31-0:20:30: Jeff references the Power Records audio version of FF #126 as we delve into the original version of the issue itself, which retells the origin of the team with some slight changes — such as John Buscema drawing the team as their contemporary selves, Roy Thomas retconning references in to comic book history and the insertion of a framing sequence that shows that all of the team have turned into insufferable dicks. Jeff blames Buscema for much of the insufferability, however, whereas I’m just not convinced that Thomas “gets” the interpersonal relationships between the characters. Jeff sings the praises of the professionalism of the issue and Roy Thomas’s “imaginary retcons,” but even he had to admit that the issue is “eugh, oof” to get through. Who says this isn’t the Mighty Marvel Age of Comics Criticism? 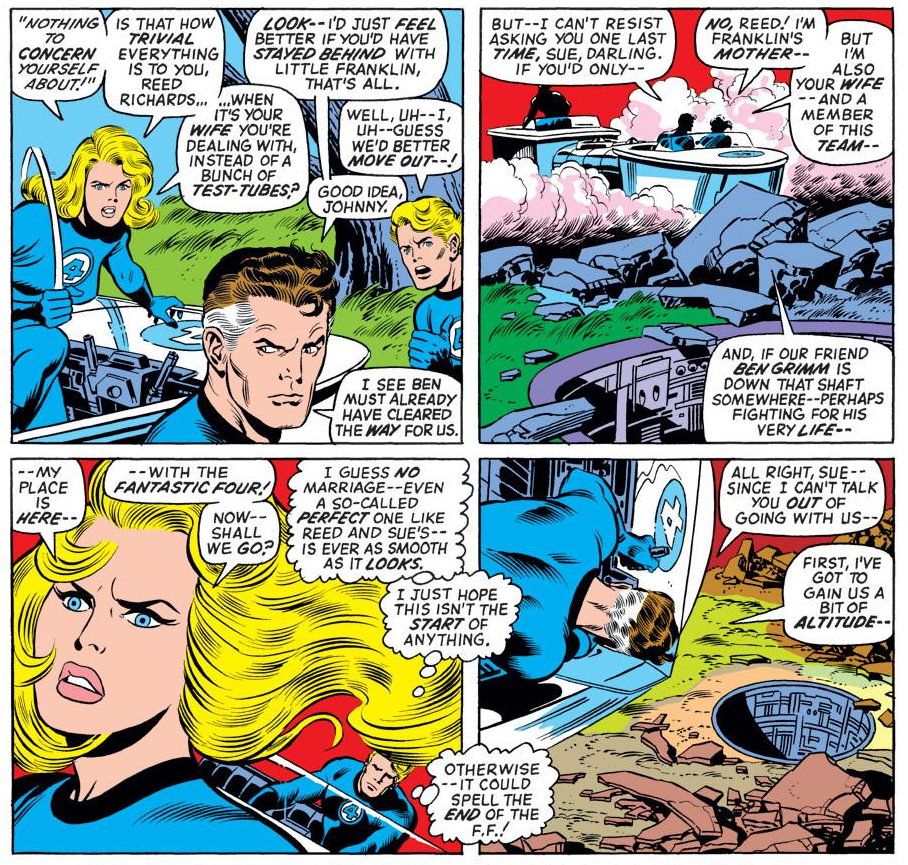 0:20:31-0:33:38: Fantastic Four #127-128 starts with a story named for a euphemism for the butt, which seems only appropriate for our discussion about Roy Thomas’ fragile masculinity. Finally, we get a storyline that deals with the important subject of why female equality might be a good thing in theory if only women weren’t such terrible shrews! On the one hand, we get excited about seeing Sue finally stand up to Reed’s horrific patriarchal attitude, but on the other, we bemoan the fact that it’s being handled by Roy Thomas, a man who seems to dislike the entire idea in the first place. To make matters worse, the plot of the story also demands that the Mole Man is a sap under the thumb of a femme fatale out for herself, because oh God. It’s not all Men’s Right Activism, however; there’s also a random supporting character who gets introduced and vanished in the space of a couple of pages, but Jeff has a theory about that which allows me the chance to do a really shitty pun. All this and a return for one of the lesser-loved elements of the Kirby days! It’s old school comics the way they just don’t make ’em anymore (which, really, might be a good thing, let’s be honest). 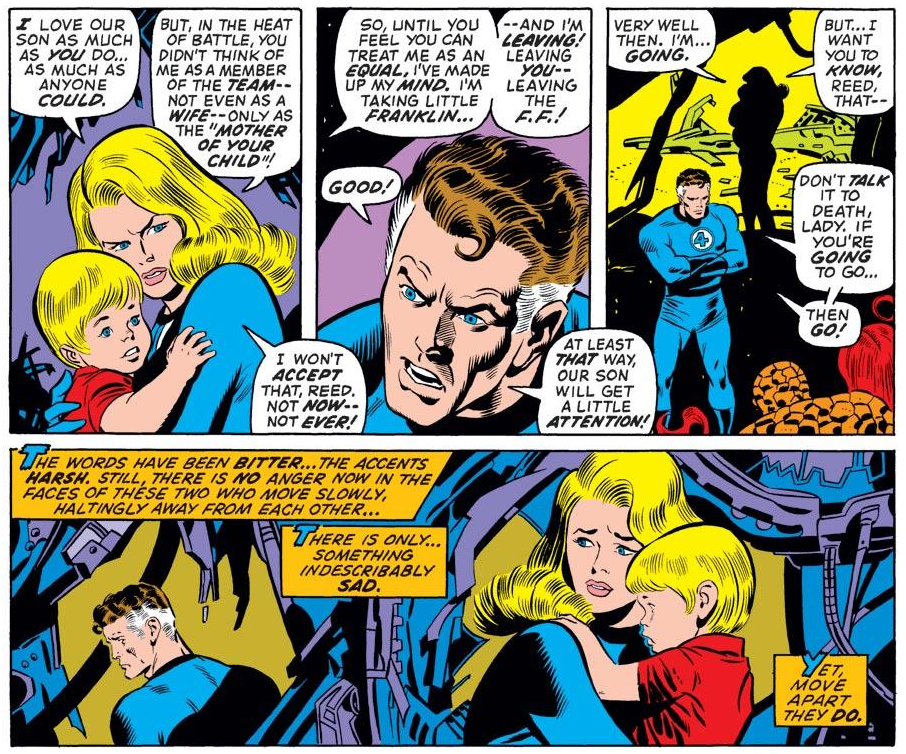 0:33:39-0:55:50: After bringing back the Mole Man, Fantastic Four #129-130 proves that the only way is up by reviving the Frightful Four, with a new hook for the team that appeals to both Jeff and I. (Spoiler: the words “schnooks” and “schlubs” are used to describe them.) It helps that we both dig the new fourth member of the team: Thundra, who once again proves that Roy Thomas is scared of women, even though her reverse chauvinism is actually kind of charming, somehow. But enough about the bad guys — let’s deal with the fact that these two issues manage to get rid of two members of the team. Does Thomas have a plan? Jeff suggests that maybe he does, arguing the case that Thomas is a smart guy, if perhaps a little too smart for the material at times. Meanwhile, I make the case that Thomas is actually a more sensitive writer than he lets on, thanks to the parting scene between Reed and Sue, although he manages to bury that elsewhere in these issues. Plus, John Buscema tries to do Kirby tech and causes a schism between Jeff and myself in the process, and a brief reminder that “Blackagar Boltagon” might be the best name in all of Marvel comics. 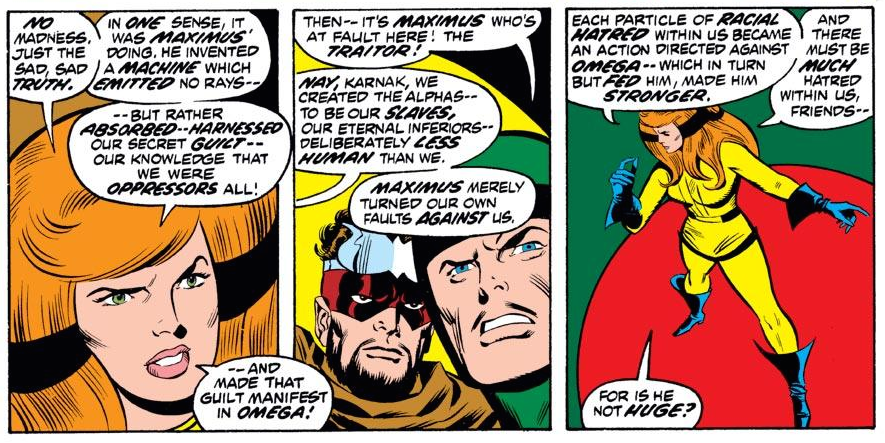 0:55:51-1:12:59: Going out with a bang — yes, these really are the final issues of his initial run — Roy Thomas brings his full-on “I have something important to say” message writing to FF #131-132, and the result is… a really strange couple of issues. Mixed in with the lurid soap operatics of Crystal choosing between Johnny and the newly introduced Quicksilver — giving us our chance to finally have our say about the Johnny/Crystal relationship, and Crystal as a character in general — is Thomas trying to say something important about man’s inhumanity to man (No pun intended), and… well, pretty much failing, thanks to his fondness for pulp tropes and language. Meanwhile, Mister Fantastic fails to change his costume, and Jeff and I disagree about the greater meaning of that, although Jeff’s version of events is probably more interesting than what I think Thomas intended. Let’s just file under “Well, there’ll be another issue along in a second,” shall we…? 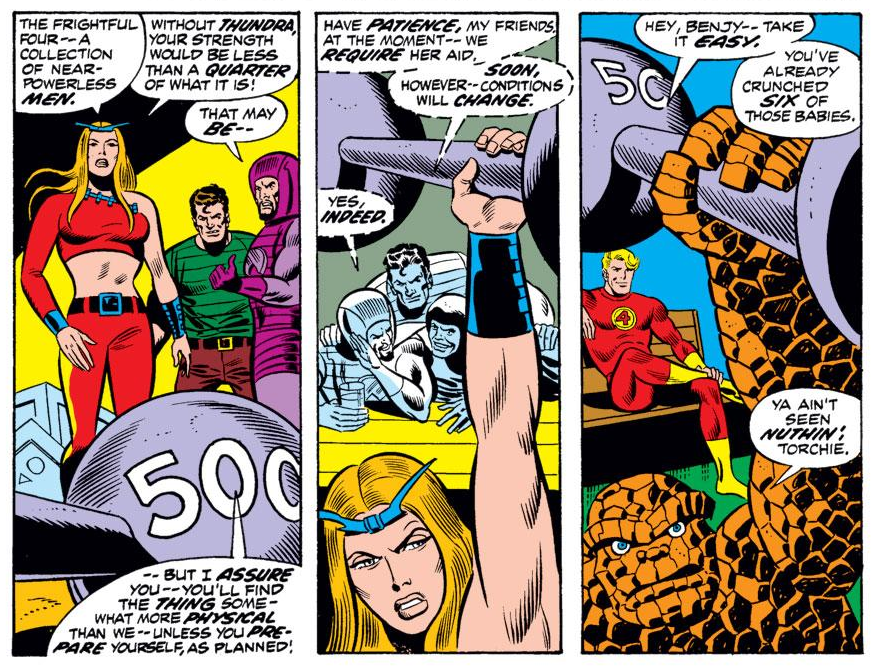 1:13:00-1:23:01: Jeff promises that Fantastic Four #133 has “an amazing change in the creative team,” but he’s not talking about the arrival of Gerry Conway as scripter — he means Ramona Fradon’s guest pencils, which are sadly buried and robbed of their charm by Joe Sinnott’s inks. (For those unfamiliar with Fradon, go here to see what her art normally looks like.) Meanwhile, the story (such as it is) brings Thundra back for a second and offers a fight of the century that not only doesn’t live up to its billing, it also barely takes place in the comic, with the rest of the issue being filler that we barely touched on because, I promise, there’s almost nothing there.
1:23:02-end: “There’s not a lot here,” I say when talking about the speed with which we got through these eight issues, and as we wrap things up — with me once again saying that there’s something authentically FF about these issues because I read them as a kid; I am all that’s wrong with comics — we look ahead to next episode, where we’ll be covering Fantastic Four #134-146, and remind you that you can find us on Twitter, Tumblr and Patreon, as ever. Next week: back to regular Wait, What?-ing, but until then, thank you for putting up with this delayed, brief episode, dear listeners. 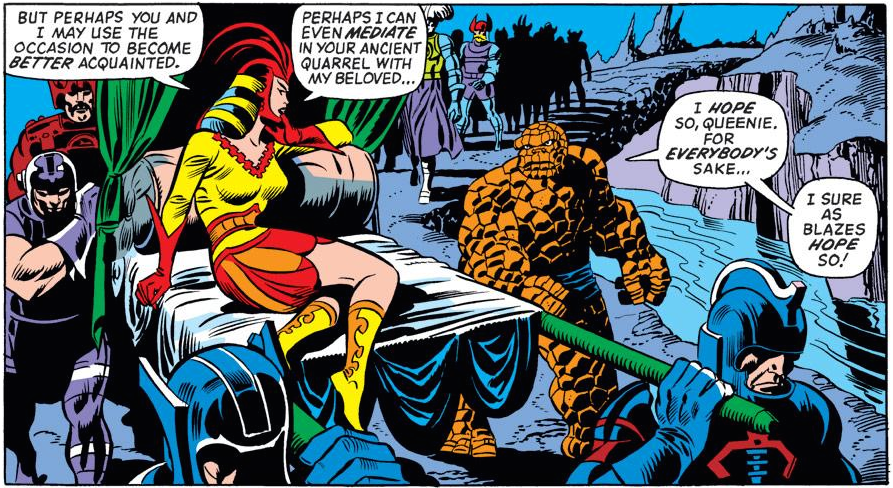