Previously on Baxter Building: The mid-70s were a strange time for Marvel’s first family, who have found themselves dealing with cosmic hockey goalies, Puppet Master-possessed heroes for hire and rampaging Hulks in the last few issues as Roy Thomas, George Perez and Rich Buckler try hard to bring a new energy to what was already becoming a flagging flagship title. But just how flaggy can things get? Oh, you’ll regret asking that question very soon…

0:00:00-0:04:28: Welcome, dear friends, to the show that feels like it never ends — especially when we’re covering Fantastic Four #171-183 (Not #184, as I’d declared in the past; that really belongs with the next batch of issues; sorry, all). To say that I’m not a fan is an understatement, but Jeff really is, setting up the long-awaited contentious Baxter Building: Civil War: Jeff v. Graeme: Dawn of Chatting episode that Whatnauts have been hoping for.
0:04:29-0:13:47: Jeff wants to know if I’m being too harsh on these issues by disliking them so much; after all, last episode, it took me a re-read to properly appreciate what Roy Thomas was doing in them. Me, I’m not having any of it, and take a brief detour into my childhood to explain the first time I read them to set up just one more reason why I’m disappointed by them. What if Roy Thomas isn’t a thief, but is an artiste doing a homage? What if Jeff is a Roy Thomas apologist? This is what we’re all about the find out. (Spoilers: Jeff makes a case for the former, the latter I just threw in there right now.) 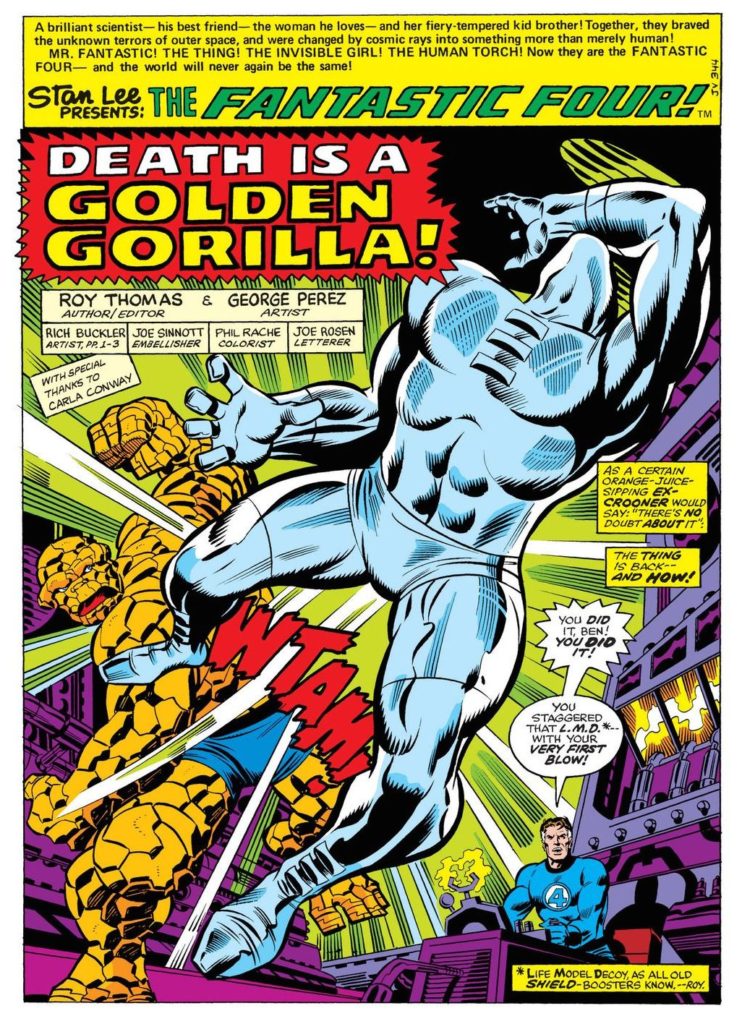 0:13:48-0:21:03: If this is the “Jeff and I fight” episode, we make a poor start of it with Fantastic Four #171, “Death Is A Golden Gorilla!”, an issue that both of us not only enjoyed, but feel pretty similarly about. But, really, how could anyone feel that angry about a pastiche that mixes King Kong and the first appearance of the Silver Surfer? Jeff makes a good argument for Thomas-as-Homage-King with this issue, even if his parallel argument about George Perez’s art as a true heir of Jack Kirby is let down slightly by using a Rich Buckler-drawn splash as Exhibit A. There’s also a remarkable claim about the quality of #176 made along the way that… well, we’ll get to that issue soon enough.
0:21:04-0:33:59: FF #172 has what I call “a classic Roy Thomas title,” missing the point entirely (although Jeff caught it on Tumblr earlier) that the issue was actually scripted by Bill Mantlo. Take that, “Cry, the Bedeviled Planet!” Does that affect our subsequent discussion about the flaws of this issue insofar as the lampshading of a ridiculous fight sequence or the way that info dumps replace forward momentum in the issue…? Potentially, but only insofar as we should’ve been saying “Mantlo” instead of “Thomas” when throwing around the blame. Still, at least you get Perez and Sinnott doing stuff like this: 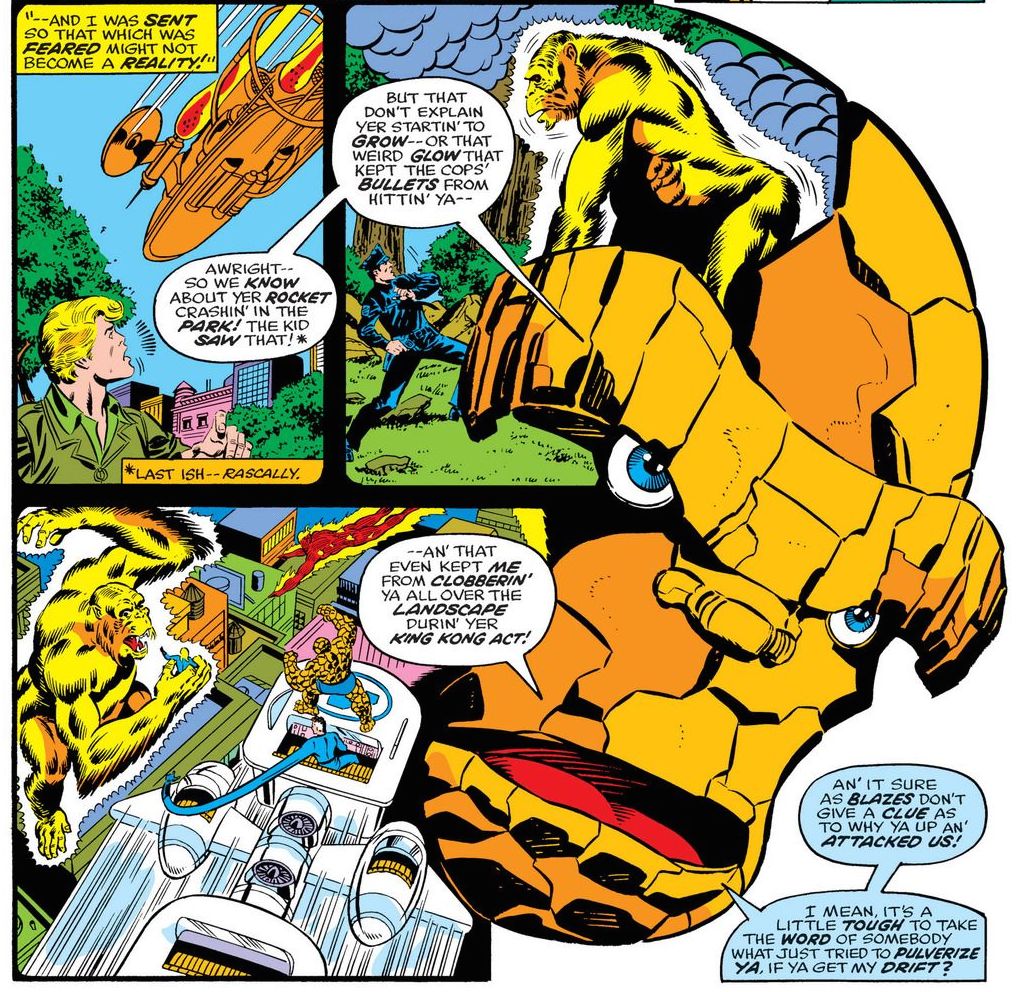 Also, we talk about repetition and whether or not it’s okay to repeat yourself if you’re improving on the same idea each time, and Jeff introduces a metaphorical reading for this storyline that, to be honest, I just don’t think is actually there. But Jeff’s read is infinitely more interesting than what’s on the page, to be honest.
0:34:00-0:56:19: Even Jeff is beginning to falter on the quality on this storyline by Fantastic Four #173. “There is a point in #173, looking at that cover, [when] you realize that things are getting sort of dire, in a way,” he says by way of introduction to “Counter-Earth Must Die — At The Hand of Galactus!” But, guess what?!? This issue sees the reintroduction of Torgo, the I-Bet-You-Forgot-Him robot from the end of the Lee/Kirby run, when Roy Thomas cycles in the old All-Star Comics formula one more time. We also get into a brief discussion about the development of the FF’s characters, and also compare the nostalgia and continuity porn of Roy Thomas versus that of Steve Englehart (The teacher versus the trickster, perhaps…?) and touch on Thomas’s tendency to introduce interesting ideas and find himself unable to explore them fully. All this, and the sensational new oath of 1976 and Jeff talking about foot fetishes. No, really. 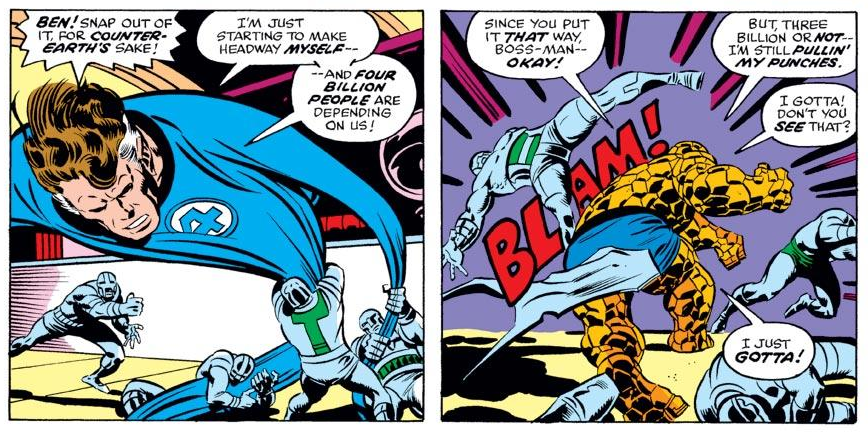 0:56:20-0:56:56: We literally skate over Fantastic Four #174 with a very bare bones summary of the plot you need to know. Really, we’d said anything and everything that we needed to say earlier. 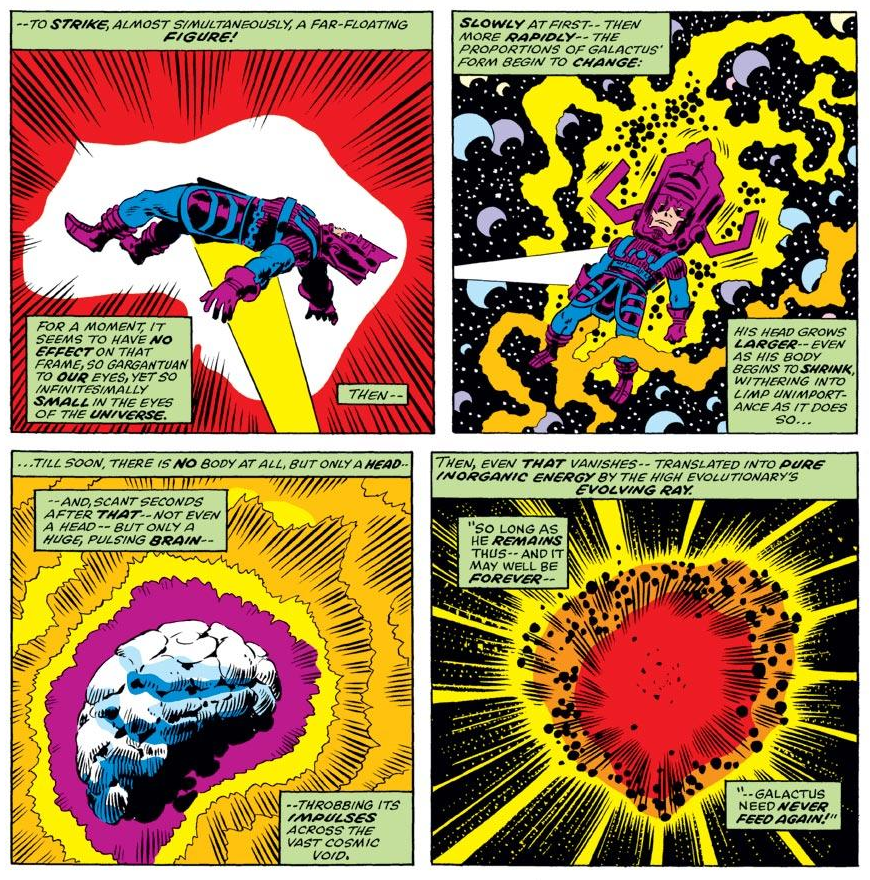 0:56:57-1:10:32: “Let’s get to #175” I say, with the air of a man who really would rather do anything else. Even Jeff agrees that this one is a disaster, because John Buscema — who pencils and inks this issue — is really, really not the man to deliver the ending to this storyline, which is even more of a problem because Thomas completely fails to deliver in the writing, as well. How best to end a five-issue wannabe Galactus epic? With rehashes of earlier Galactus stories, a fight in the sky by two giant guys in armor, an absolutely out-of-nowhere Thing reversal and an absolutely surreal denouement where Galactus kind of dies of terminal indigestion. (Don’t worry, he gets better later, because of course he does.) For all the flack we give Roy Thomas for being trapped by his own nostalgia, I’m actually surprised neither of us really harped on more about the revival of a one-issue joke character who hadn’t shown up in more than 150 issues. I guess there was just so much to complain about this time around…?

1:10:33-1:20:04: “Is it fun because we read Marvel Comics: The Untold Story and it’s not actually a fun comic?” I ask about Fantastic Four #176, which sees the Impossible Man terrorize the Marvel Comics offices of 1976, before deciding, “I don’t really care, because I enjoyed it.” This is essentially a massive in-joke for Marvel obsessives turned into an entire issue, with some special highlights, whether it’s a Stan Lee who reads surprisingly like J. Jonah Jameson and a fascinating scene that demonstrates, in the words of Jeff, that “Roy Thomas’s portrayal of Jack Kirby is far more generous than Kirby’s treatment of Thomas.” (We’re referring to Houseroy, the toady of Funky Flashman, for those not in the know.) Jeff also refers to this amazing What If…? issue, as well, and if you’ve never read it, you should check it out — it’s on Marvel Unlimited. 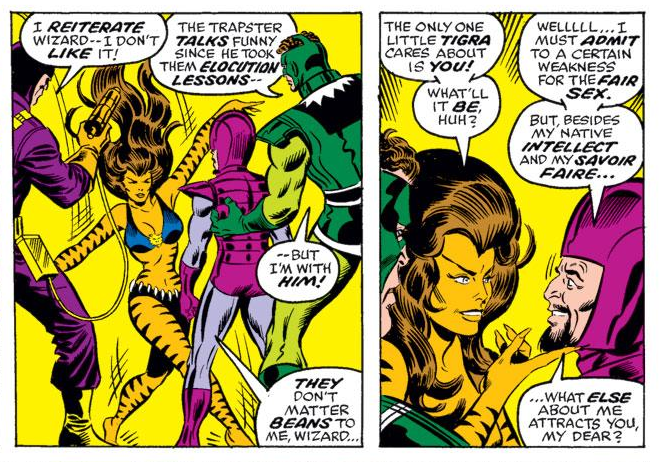 1:20:05-1:28:36: We pretty much move away from going issue-by-issue through the “Brute” arc of Fantastic Four #177-183 (with the exception of #180, which is a fill-in), in large part because I think it’s such a mess — listen to the lack of joy in my plot description! — and in part because it’s such an odd formless run that has feels so sloppy that we’d be repeating much of our commentary across issues. But we start with #177, which is the second fun (and funny) issue in a row. Thomas does comedy very well, and this issue cements the value of the Frightful Four as really great comic relief. If only we could have more of this kind of comic and not the Brute storyline that we get. Oh, God. The Brute… Necessary to note: when I’m recapping the storyline, I say that Alicia doesn’t appear in these issues, just before talking about Sue talking to Alicia. What I meant was that Alicia isn’t part of any scenes dealing with the Thing/Tigra/Thundra/Alicia love quadrangle. Obviously. 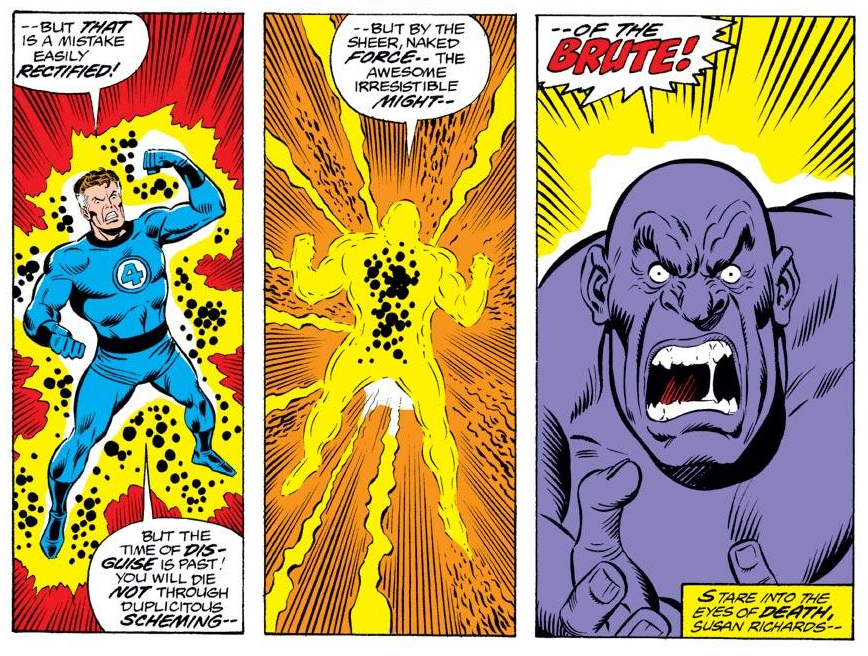 1:28:37-1:53:52: Jeff is entirely unconvinced by my adoration of the Ron Wilson/Joe Sinnott art team for a couple of issues, and doesn’t seem to be that interested in the Sal Buscema/Sinnott team, either. I find both more attractive than the George Perez/Sinnott pairing, but horses for courses, etc. We spend just as much time talking about the writer changeover, because Roy Thomas disappears two issues before the end of this storyline, leaving no less than four writers struggling to bring things to a close. (Jeff makes the case for Thomas having grand plans and intentions that he just couldn’t carry off, whereas I’m just seeing repeated tropes offering nothing new this time around. Which one of us is right? Your answer depends on how much you love Roy Thomas — although his triple President cameo scene is every bit as wonderful as Jeff says it is, I have to admit.) Also, Bill Mantlo is underrated, which I feel is an argument we’ve made more than once before. Otherwise, we’re stuck in the mire of the Brute — the second fake Reed Richards the series has seen in a little over a year, which works for Mr. Lester and really, really doesn’t for me.

1:53:56-end: We bring it all home by looking back over the last few storylines and discuss how we define success and failure for comic stories, in an oblique sense. It’s something worth remembering as we head into next episode, where we’ll take a run at Fantastic Four #184-200, a run that even Jeffrey Lester is not looking forward to. Until then, don’t forget to look for us on Twitter, Tumblr and Patreon, where there will be so much less Roy Thomas talk in comparison to this episode. As always, thank you for listening and reading, Whatnauts. May none of you ever be replaced by your own concussed Counter-Earth duplicates.