Previously on Baxter Building: We made it to #200, only to discover — despite what either Jeff or I would’ve expected — that the series suddenly blossomed into the best shape it had been in for years, thanks in large part to Marv Wolfman, George Perez and Keith Pollard finally delivering on the promise the series had, but hadn’t been able to live up to, since the Kirby/Lee era. Will that quality extend past the anniversary issue? That’s a good question, but not one we’ll get around to addressing this time. 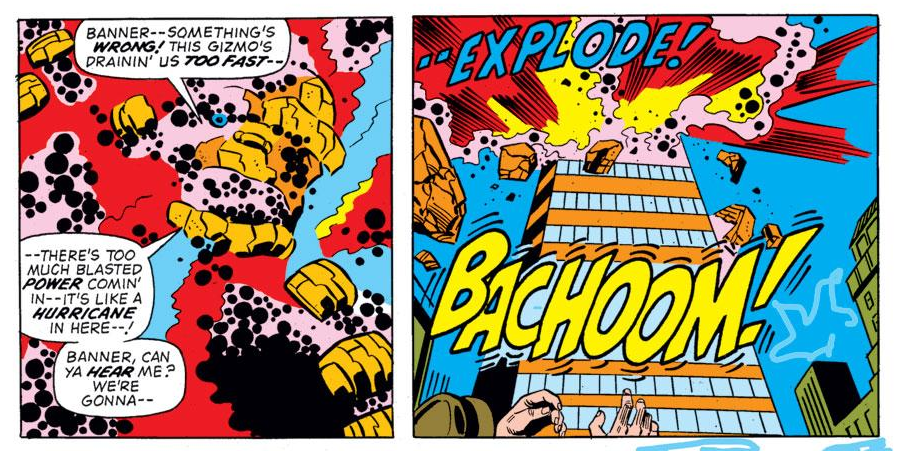 0:00:00-0:05:24: As the cold open suggests, jumping off the monthly merry-go-round to take a look at the various special issues we’ve missed in our plunge forward through Fantastic Four to date means going all the way back to 1974 and discovering that the Giant-Size issues and Annuals from that period (Annuals #11-13 and the four non-reprint issues of Giant-Size Fantastic Four, the first of which was actually called Giant-Size Super-Stars Featuring Fantastic Four) are… not really that good, a fact we talk about as we try and steel ourselves for what’s to come. 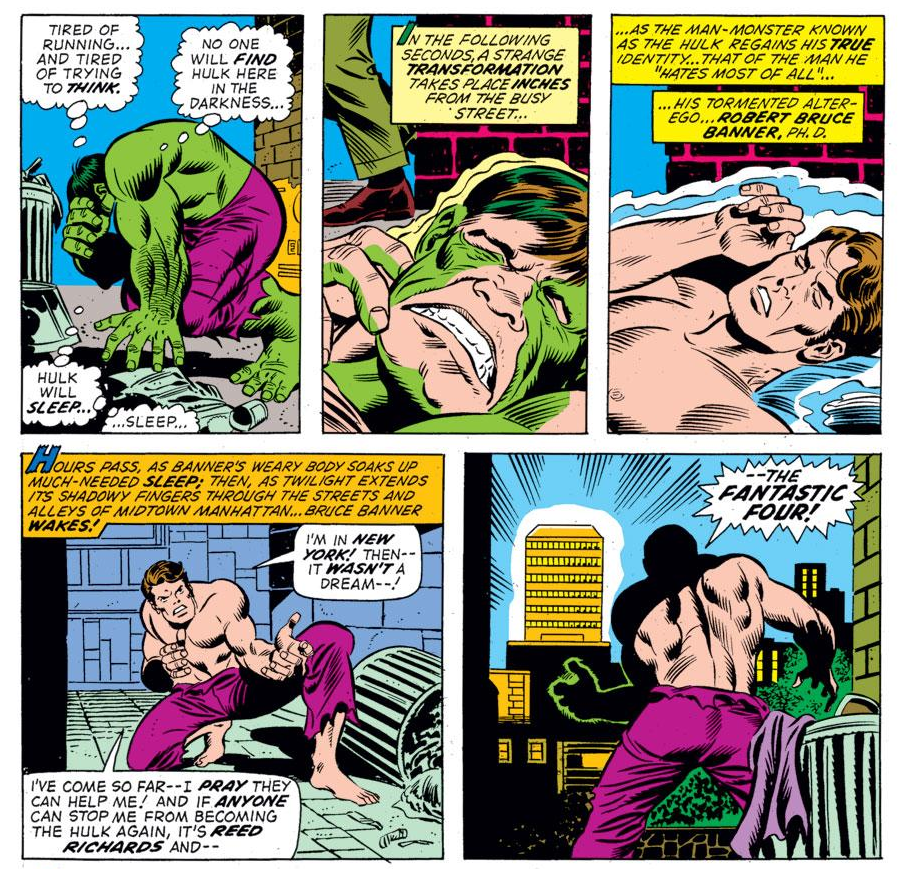 0:05:25-0:13:42: Giant-Size Super-Stars #1 is, indeed, a giant-size issue of Marvel Two-in-One in all but name, as the Thing and the Hulk swap bodies and a very long fight ensues. The highlight of what Jeff describes as the “least objectionable” of the issues we’re covering this episode — aside from a re-appearance of Thundra, because this dates from 1974, the era when Thundra was still a thing in the regular F.F. series — is seeing Rich Buckler and Joe Sinnott channel not just Kirby, but also, if you’re me, Herb Trimpe. I mean, doesn’t this look like Trimpe to you? (Although, when at the 9:28 mark, I say “when the Thing shows up, that Thing is Herb Trimpe,” I obviously mean the Hulk.) It’s not a comic that will change your life, but is that really such a bad thing, especially when compared with the next few books we’re about to cover. As Jeff points out, that’s a low bar, but it’s a bar nonetheless. 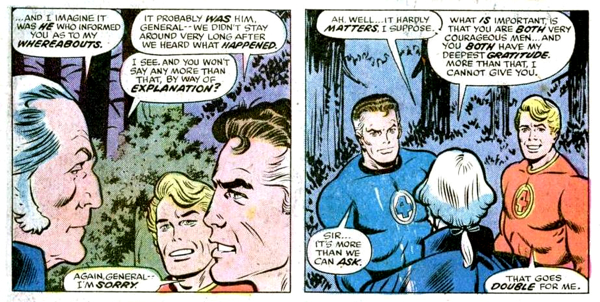 0:13:43-0:26:57: “I have a huge debt of gratitude I owe to Giant-Size Fantastic Four #2, Jeff says, but it’s not because of the lead story of the issue. If ever there was an issue that should be good, it’s this one, because there’s a lot that’s genuinely charming to be found here. Not least of which is some fine artwork by John Buscema and Joe Sinnott, who just might make you wish they worked on a George Washington comic back in the day. And Willie Lumpkin returns (giving us the chance to briefly touch on the weird distorting nature of nostalgia and legacy comic creators)! Sadly, the attempt to recapture the magic of the early Lee/Kirby F.F. end up soured by a misjudged final chapter that none of the creators really seemed to care much about. As Jeff puts it, “it’s a crap comic.”
0:26:58-0:46:24: Despite the fact that Giant-Size Fantastic Four #3 is arguably the worst of the comics we’re covering in this episode, it might be the comic we most enjoy talking about — or, at least, quoting from. “It is the most hilariously pretentious comic I think you or I have ever read,” I say, but what should we expect from a story where the Fantastic Four face off against the actual Four Horsemen of the Apocalypse, who represent man’s inhumanity to man? No wonder Jeff calls it “the worst idea ever conceived.” Especially when it contains vague fictionalizations of the anti-apartheid movement in 1970s South Africa that look like this: 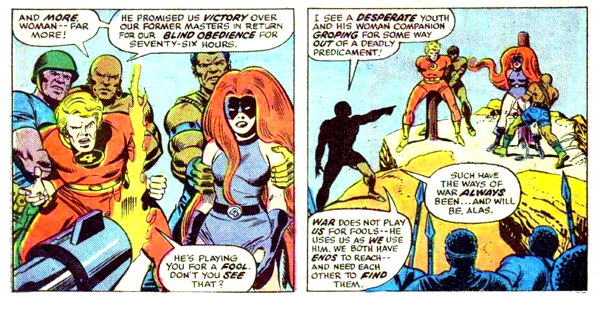 Or Reed trying to force feed people by slamming their heads into bowls like this: 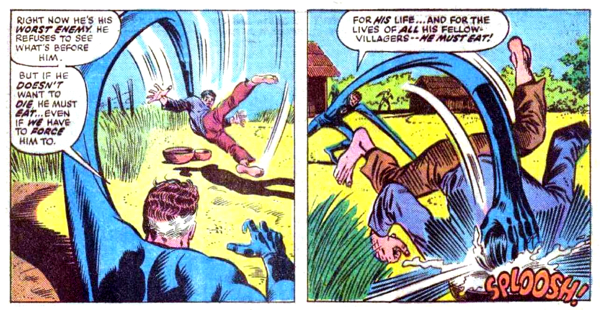 Make no mistake, Whatnauts — this is the worst comic, despite Ben Grimm’s wonderful exclamation “Comb my toupee!”
0:46:25-0:58:29: Giant-Size Fantastic Four #4 features the first appearance of Madrox the Multiple Man — co-written by Chris Claremont! — in a relatively underwhelming issue that I love because of childhood memories and Jeff is (perhaps deservingly) more critical of. It does give us the opportunity for two particular joys, thankfully: my yelling Madrox impersonation (I don’t know what brought that on, I’m sorry) and Charles Xavier and the most amazing visual interpretation of him using his psychic powers that has ever existed in comics:

We also get into whether or not the Fantastic Four are too particular to give us serviceable generic superhero comics without them being impossibly dull, or whether we’ve been spoiled by Lee and Kirby at their best. 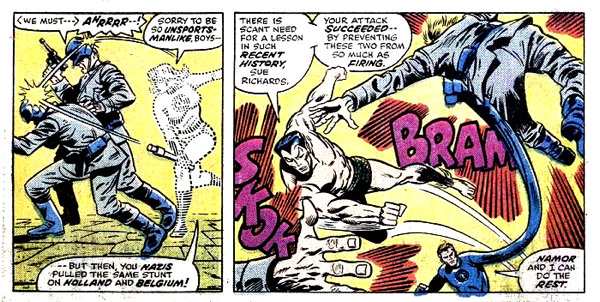 0:58:30-1:09:55: Roy Thomas gets his Roy Thomas on in Fantastic Four Annual #11, in which the F.F. are time-traveling yet again, this time back to 1942 because it’s a Roy Thomas-written comic so of course there are Golden Age heroes. Jeff likes it, but I find it pretty much a snore, not least because — as Jeff points out — there are some very odd choices in terms of pacing and action, and some pretty underwhelming villains for the combined seven superheroes to fight. Maybe we should’ve called this one “When Nazis aren’t enough.”

1:09:56-1:30:50: Proving yet again that Jeff and I get exercised by amazingly shitty comics, FF Annual #12 — a comic described as “a drag” by no less an authority than me — lets us talk about failed attempts to merge Kirby mythologies with faux Fourth World characters facing off against the combined might of the Inhumans and the Fantastic Four, the utter disappointment that is the Sphinx, and how very off-brand it feels for a Fantastic Four comic. There’s also a weird, quasi-racist dig at the makers of the then-contemporary King Kong remake, and an extended Gong Show cameo, and Marv Wolfman not quite understanding how explosive decompression works. And an unexpected but entirely necessary Singing In The Rain reference, too, and Jeff wondering aloud what went wrong in transitioning the Inhumans into anchoring their own comic book. We really make the most out of what Jeff describes as a serious contender for “the worst comic. Just the worst.”

1:30:51-1:46:47: Okay, so Fantastic Four Annual #13 doesn’t have a title for the overall story, it does have a coloring job by Françoise Mouly, so that kind of balances out. Oddly enough, we somewhat ignore the actual plot of the issue to discuss the combination of Sal Buscema and Joe Sinnott, the way that Buscema draws Sue as opposed to other artists, and why Bill Mantlo might be the best writer when it comes to delivering stories with a message, because he’s enough of a hack to keep from getting lost in prevention. Also, how important is it to ensure that the Fantastic Four aren’t mean-spirited?
1:46:48-end: We wrap everything up by looking back at the seven books we covered and trying to choose which was the best of a bad bunch, and then look ahead to the next episode, where we’ll be getting back into the regular series and covering Fantastic Four #201-214. (I am irritatingly vague about when that episode will be, because I didn’t know at the time; the answer is “two weeks from now,” I can now tell you; there’s a regular Wait, What? next week.) Until then, thank you as always for listening and reading along, feel free to look us up on Twitter, Tumblr and Patreon, and prepare yourself for much, much more Sphinx action next time around. Oh, yes.

5 comments on “Baxter Building Ep. 22: “Why Did I Get Involved With This? If We Didn’t Need Tax Money…””