Previously on Baxter Building: The long — over 100 issues — drought of mostly-bland Fantastic Four is over, as John Byrne has arrived for his much-lauded run as writer/artist and, much to our surprise, both Jeff and I loved his first six issues. Can the quality continue unabated for this episode?!?

0:00:00-0:05:55: We pretty much start off by answering that question; as good as Fantastic Four #238-247 are, and they’re pretty good overall, they’re not up to the standard of Byrne’s initial issues. We talk about why that might be and, unusually for us, throw out specific numbers of issues we’ll be discussing that particularly disappointed us, before moving on to…

0:05:56-0:19:42: Fantastic Four #238, which sees no less than two stories, both of which are all about the subplots. (Perhaps that explains why the issue has such a bizarre cover, which I find myself taken with.) But we get to talk about Frankie Raye being a never-nude, the Thing’s definitely-completely-100%-permanent regression in appearance, and the illusion of change versus the real thing. That might sound like we’re not too impressed with the issue, but that’s not the case; as I put it, “it’s a very light issue, but it’s a very light issue that implies forward motion.” We certainly preferred it to… 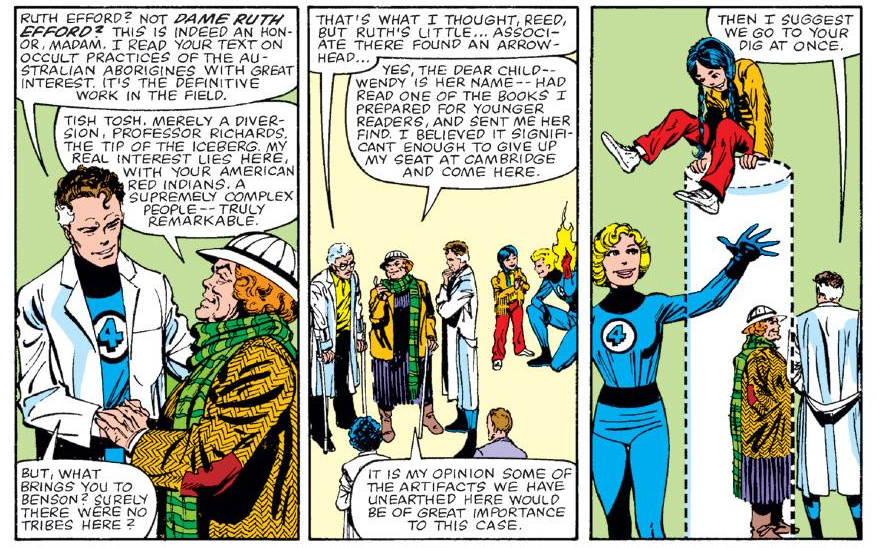 0:19:43-0:34:42: FF #239, which has a great opening — Aunt Petunia finally shows up, and she’s not what anyone (including the long-time reader) expected — only to completely go to pieces after that. Jeff and I disagree on the value of the basic premise of the story (I think it’s fine, Jeff most certainly does not), but we’re of the same mind when it comes to the quality of the execution, which is so bad, we liken it to Byrne’s Alpha Flight. (Those who think that John Byrne’s Alpha Flight is a good comic, I kindly suggest that you revisit it and allow your happy nostalgia to be as ruined as mine was, upon re-reading.) That said, it does give Jeff a chance to talk about Byrne’s love of white-out, so I guess there’s that. We also touch lightly on Byrne’s conservatism, which will get another airing before the episode is over…

0:34:43-0:46:50: The Inhumans show up in Fantastic Four #240, an issue so packed that Jeff describes it as “the opposite of all those FF annuals that got broke up into three stories — this is an FF annual that John Byrne is like, ‘I’m gonna bring this son of a bitch in in 20 pages, maybe 18.'” He’s not wrong; this is a ridiculously busy issue that features exposition for stories that had never happened before, an off-panel death of a fairly major character, the birth of the kid of two long-running supporting characters, a near-death experience for the entire Inhuman race and Attilan moving to the moon. With all of that going on, you’d think that Byrne wouldn’t be able to work in a small slam on a beloved X-Men story, but don’t worry; he’s got that under control. 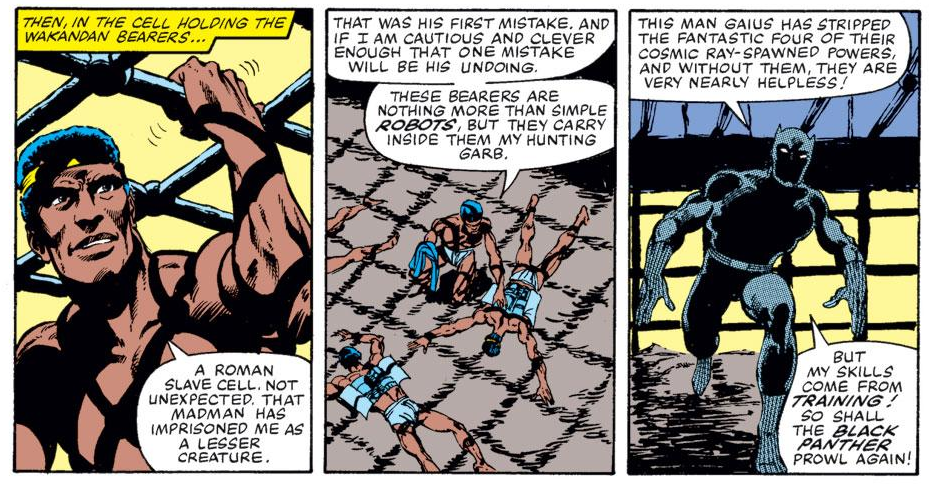 0:46:51-0:55:19: If the last issue was a sign that Byrne was working too much stuff into one issue, FF #241 has the opposite problem, struggling to stretch a very Star Trek idea across this one-off, even with the nonsensical inclusion of the Black Panther, who serves so little actual purpose in the story that Jeff has a theory about John Byrne’s ulterior motives in including him at all. At least he shows that he can… jump…?
0:55:20-1:15:42: Fantastic Four #242 begins the first proper multi-part storyline of Byrne’s run — ignoring the “Man with the Power”/”Four Against Ego!” two-fer from #235-236, because that was more prologue/story — and, of course, it’s a Galactus story. While the first installment disappoints due to underwhelming choices, mostly artistic, by Byrne (“Everything that’s happening in this issue should be amazing, but you kind of flip through it and go, uh-huh, uh-huh, and… huh,” as Jeff puts it), we do get to see more of Frankie Raye’s roommate Julie Angel, who apparently doesn’t have shoulders as most humans know them:

1:15-43-1:24:56: FF #243 should feel like the end of the world, as Galactus takes on (and quickly dispatches) Terrax and then has to deal with the combined might of the Avengers and the Fantastic Four. And yet, it’s underwhelming and easily forgettable, although it does provide us with an excuse to talk about Galactus’s weakness when it comes to card games. 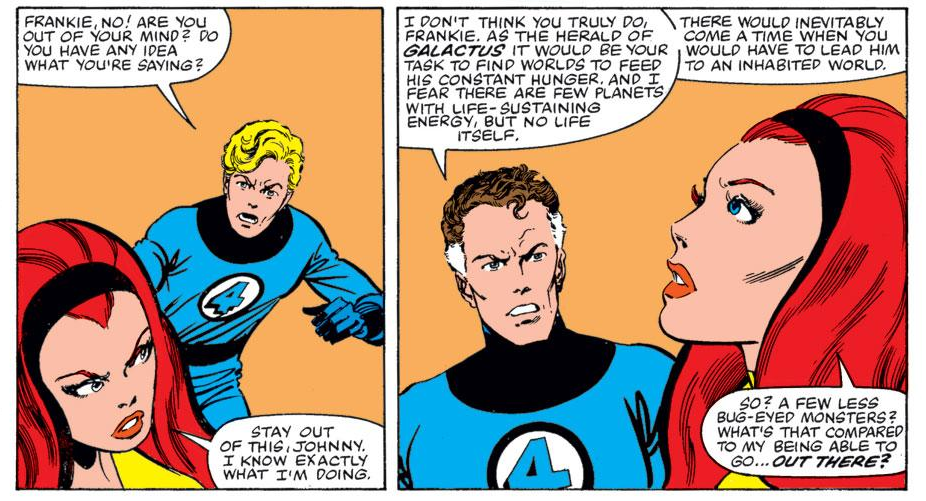 1:24:57-1:43:44: The Frankie Raye subplot that’s been running through Byrne’s entire run to date comes to a head in Fantastic Four #244, and… well, on paper, it’s an interesting conclusion that plays out some themes that have kind of been in play all along, but reading it play out, it’s not entirely convincing. We talk about the threads that almost lead to this moment, the Frankie Raye that we could have seen, and the ways in which Byrne is accidentally feminist in terms of his treatment of Frankie’s decision to leave Earth and become Galactus’s latest herald. (Jeff also drops a plot he would’ve written had he been writing Fantastic Four in the 1990s, so you can get your Jeff-as-Tom-DeFalco fanfic up to date.) 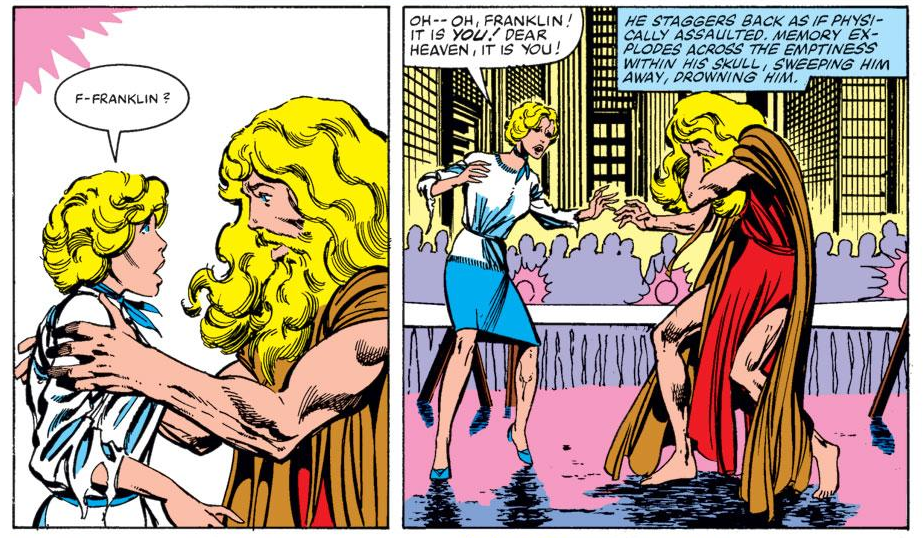 1:43:45-1:55:23: An issue after Byrne ties off the Frankie Raye subplot, he follows it up with a speedy, pretty nonsensical conclusion to the Thing subplot that got started back in #238, leading Jeff and I to spend much of this discussion of FF #245 talking about how unexplored that subplot actually was. There’s also a brief foray into metafictional fictional media criticism, and I get to share a Katherine Hepburn quote that I adore, which arguably means that this conversation might be more entertaining than the issue itself. Unless, of course, you really, really wanted to see Franklin Richards look like blonde Jesus for an issue. 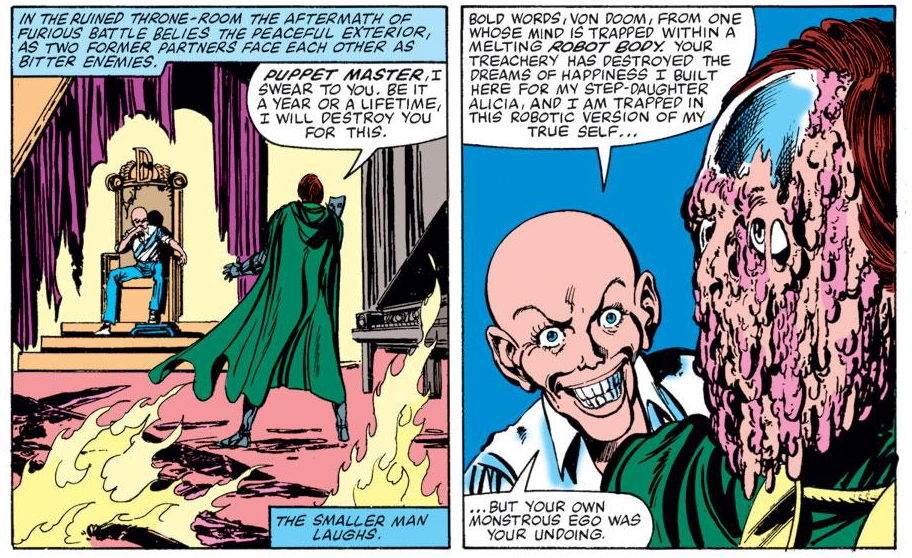 That’s better. A misery shared is a misery… halved? Or something like that? Anyway, Doctor Doom returns, and returns, and returns, and returns, as Fantastic Four #246 picks up where Micronauts #41 left off… with the real Doom’s mind trapped in a melty-headed doll version of his body, and goes through a lot of motions in order to undo the status quo changes Doom (and Latveria) had gone through since the Lee/Kirby days. But at least there’s lots of robot punching, and a layout that works better when read in the original print comic than digitally. 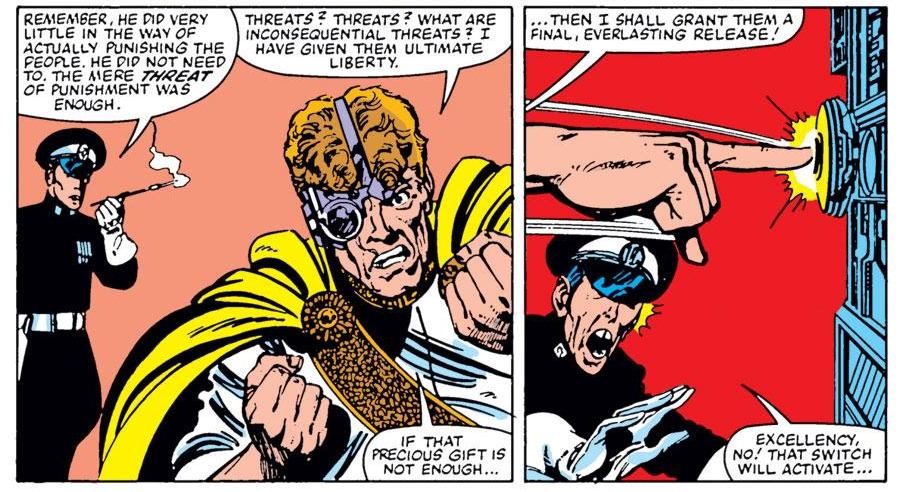 2:02:17-2:14:16: FF #247 is, as Jeff puts it, “a real interesting story to read in 2017, I think.” At any other time, a story which basically says, “every country needs the right totalitarian dictator” might seem like satire, or at least misplaced cynicism. But today…? The effect is just a little bit different, especially when the FF show little-to-no remorse about the fact that they’d installed a leader who is arguably even worse than Doom just a few years back, and seem to do nothing more than frown when faced with seeming confirmation that Doom just outright murdered a dude. Moral relativity is a necessary evil — I feel like there’s a pun there — but is a Fantastic Four comic the best place to explore it?
2:14:17-end: Jeff and I talk about the strangeness of the past ten issues, and how we feel about them overall, especially compared with Byrne’s first half-year on the book, and then set your reading assignment for the next episode: Fantastic Four #248-260. Ambitious? Yes indeed! But we think you can handle it. When you’re not reading FF, don’t forget to check out our Twitter, Tumblr and Patreon pages. As always, thank you very much for reading (and listening).