Previously on Baxter Building: After more than a year, the Fantastic Four is back together again, having defeated Doctor Doom once and for all (Spoilers: that “for all” part isn’t going to stick) and overcome all the interpersonal dramas that tore them apart in the first place. Now, the sky is the limit… literally. As the team heads into space, everything’s about to seem very limited indeed.

0:00:00-0:03:39: Secrets behind the podcast! Because of Jeff’s vacation, this episode was actually recorded just hours after the last Baxter Building, and the cold open of this episode is my pre-episode suggestion to Jeff that we also try to do a Wait, What? episode (The one released last week; time is a strange thing) after recording this episode. Jeff vetoes it, and it’s a good thing, too; we get very punchy talking about Fantastic Four #201-214, fourteen issues that neither of us were particularly enamored with, as you’ll discover. Did Marv Wolfman only have one story to tell? 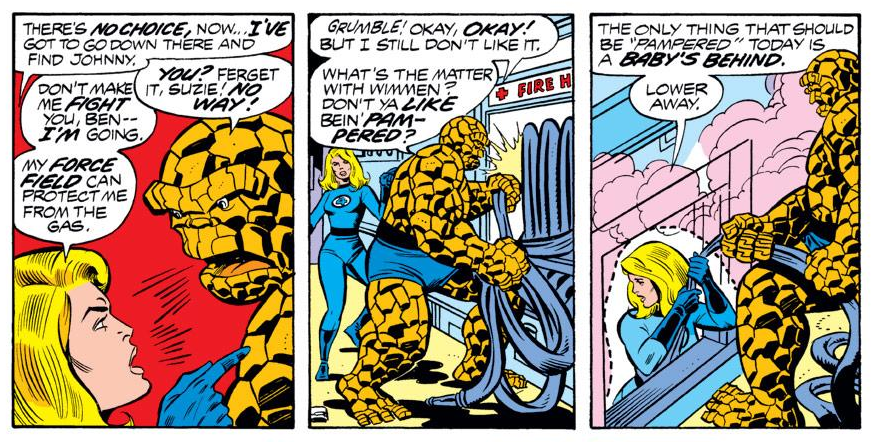 0:03:40-0:13:56: Fantastic Four #201 is, at heart, an issue concerned with continuing to reset the status quo, which means returning to the Baxter Building — even though it’s trying to kill them! It’s not all bad, though; there’s a cutaway guide to the Building that gives Jeff and I the chance to complain about their planning, a discussion about whether lasers should or shouldn’t work against the Invisible Girl, and a second discussion of the disappointment of lever-pulling, and a climax that isn’t really earned by the issue itself. 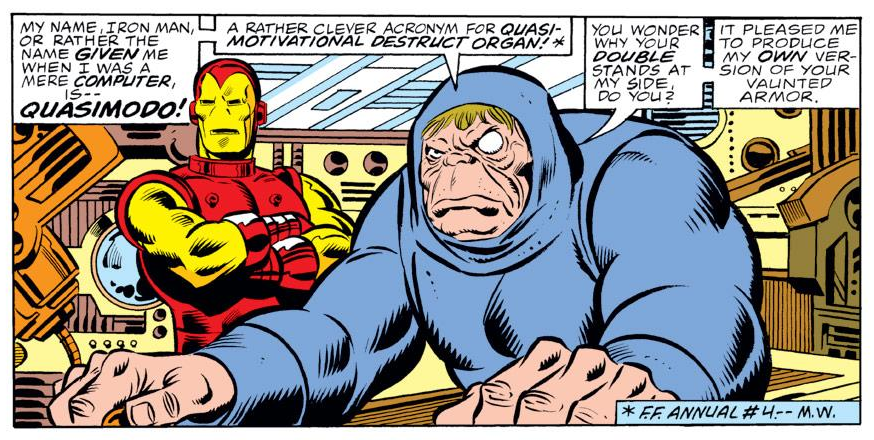 0:13:57-0:22:35: How great is Iron Man? Apparently so great that he’s more effective as a superhero when Tony Stark isn’t involved, judging by how well the remote-controlled armor does in FF #202, where it not only dispatches the team in record time, it also manages to steal the FF’s Baxter Building headquarters in the process. Sadly, it’s all downhill from there, thanks to a battle with a villain who can’t move except Marv Wolfman doesn’t understand what that means, and a conclusion that is a cliffhanger that’s not going to be picked up anytime soon. 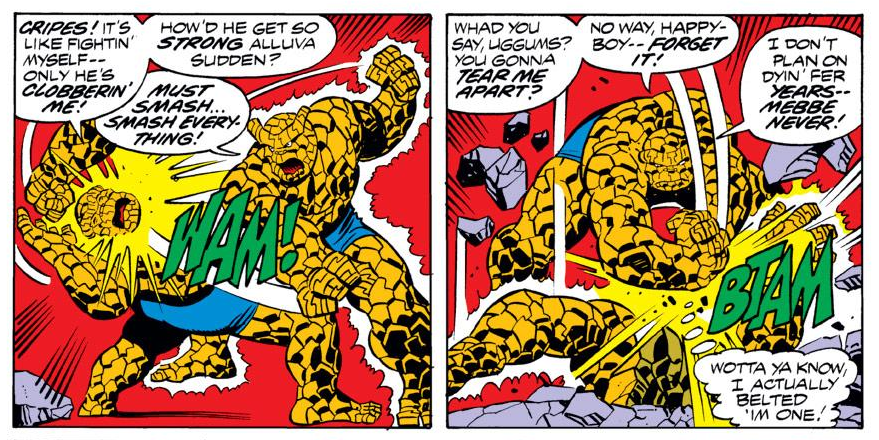 0:22:36-0:30:53: “And A Child Shall Slay Them!” (Fantastic Four #203) could not feel more like a fill-in if it tried, as the Fantastic Four deals with the African-American Franklin Richards, a fact that Jeff points out that I hadn’t even considered even so it’s so amazingly obvious. It’s a slight issue with little to recommend it beyond pointy eyebrows (although there is a return of omniscient Reed, because… well, I guess he had to) so we quickly move on to…

0:30:54-0:41:26: This is where it all starts going downhill, as FF #204 starts a story-cycle that won’t end until #214, and it’s really not very good. Why is it so underwhelming? Well, for a start, it’s tying up loose ends from the soon-to-be-canceled title Nova, there’s a subplot about Johnny going back to school while demonstrating that he clearly needs to because he is an idiot, and it’s all done with the excitement and enthusiasm of a drugged sloth. “You think that it was… all the sweeping grandeur that you can fit into five to seven panels per page, over the course of, like, five pages. It’s just nothing,” as Jeff puts it. Seriously, buckle up, Whatnauts. It’s about to get really, really bad. 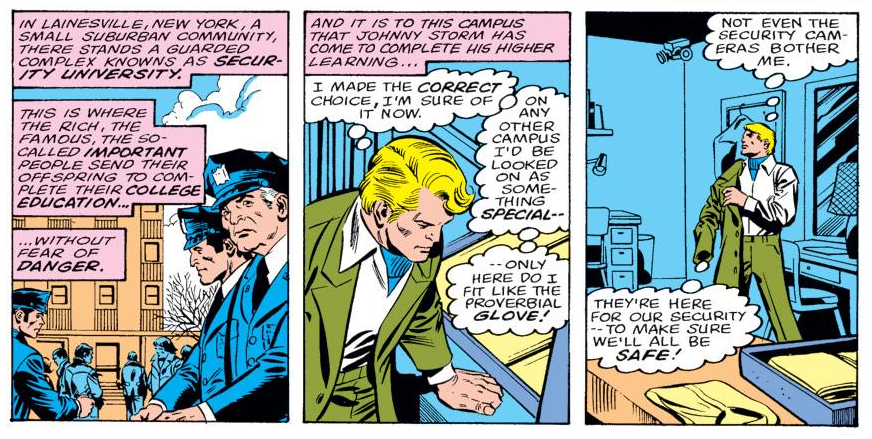 0:41:27-0:56:29: When is a Star Destroyer like a woman’s genitals? When perspective gets weird on the splash page of Fantastic Four #205, just one of many problems with an utterly underwhelming comic that wants you to be impressed — there’s even a Watcher cameo to underscore the dramatic nature of what you’re reading! — but entirely fails to do anything that’s actually impressive. Still, at least we get to find out that Johnny’s really, really into being watched, and learn the secret about just how Johnny dries himself after a shower. Because you demanded it! Plus: Adora is really sad that her boyfriend’s asleep! The worst dialogue! Reed Richards losing his shit over a room filled with computers! (Jeff’s great Ben Grimm impression!) And the Skrulls and their dog-obsessed lingo! Marv Wolfman, where was your mind?

0:56:30-1:05:52: As no less an authority than Jeff Lester puts it, “issue 206 is completely dull, again.” We’re only three issues into this horrendous storyline, and Jeff and I are struggling to come up with anything to say about this one. At least there are more references to dog-themed insults, and Jeff gets to remember just how much he loved the original Nova series, as even more cast members from that series show up here. Oh, and the F.F. apparently die. Maybe. Possibly. 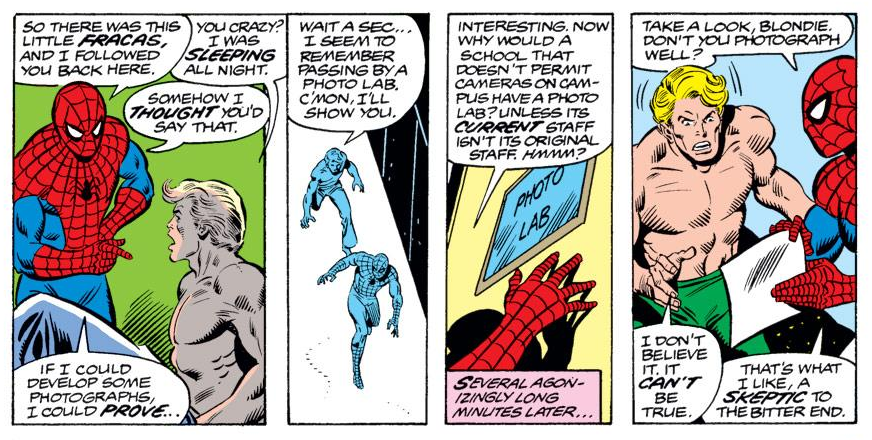 1:05:53-1:12:16: The best thing about Fantastic Four #207 is that, after Reed, Sue and Ben apparently getting blown up in the cliffhanger from the previous issue, they don’t appear, or even get referenced, in this issue. Instead, it’s a Marvel Team-Up issue where Spider-Man shows up to quickly — but not quickly enough — wrap-up the Johnny subplot. Well, “wrap up” in the sense of, “It frees Johnny up to join the rest of the team next issue, but it doesn’t really explain much of anything else.” Just one episode after we sang the praises of the Sal Buscema/Joe Sinnott art team, they turn in a surprisingly disappointing fill-in with a genuinely disappointing Spider-Man, but for the second time this episode, the issue ends with a cliffhanger that will not be followed up anytime soon. Who said this isn’t the era of Mighty Marvel Falling Apart-ness?

1:12:17-1:17:41: How much does the Sphinx suck? Those who heard last episode think they know the answer to this question (“A lot,” in case you didn’t listen; shame on you, as well), but just wait until he completely steals this storyline in FF #208 by… growing really big and deciding that he’s going to destroy the Earth because… Marv Wolfman got bored…? Jeff gets excited about up-skirting for the second time this episode, but otherwise, both of us get mildly distraught about how underwhelming this issue — and this storyline — had become. Honestly, it’s not very good.

1:17:42-1:26:25: It’s not a spoiler to reveal that the full title of the story — “The Fabulous FF Battle For Their Lives Even As They Find Themselves Trapped In The Sargasso of Space” — is by far the most entertaining thing about Fantastic Four #209. But we do get the first appearance of John Byrne in the series, as he takes over the role of penciler with Joe Sinnott still inking his heart out, and the first appearance of Herbie the Robot — the latter an event so exciting that it gets a cover blurb and some internal metatext. But as for the overall story itself, it’s so forgettable that Jeff and I both thought forget what it’s actually about, prompting me to complain about Wolfman’s misunderstanding of narrative scale and tension. “Nothing really matters,” Jeff comments, which is a problem when the fate of the series’ protagonists, their home planet and their surrounding galaxy theoretically hang in the balance. 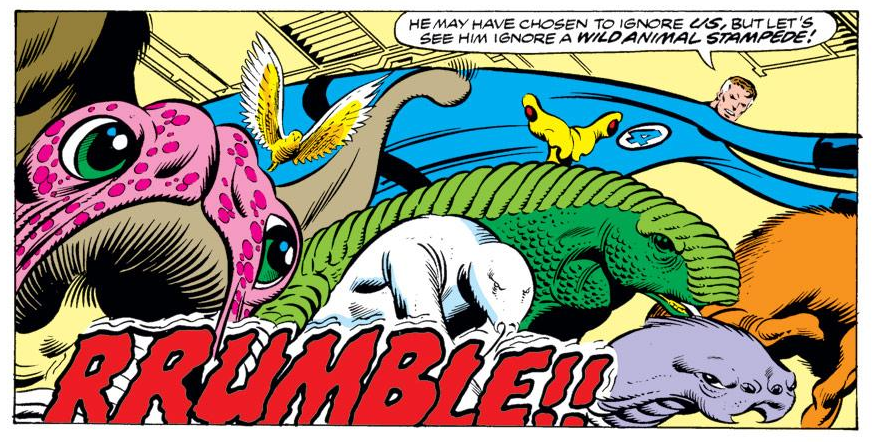 1:26:26-1:30:47: You might hope that the discovery of Galactus early on in FF #210 restores some narrative momentum, but you’d be wrong; I call it “an issue of filler that leads to a cliffhanger that is also filler,” and I’m entirely correct. Hey, guess what? Galactus has a space zoo! And the animals run amok! Because “honestly, it just feels like Marv Wolfman has read too many comic books,” as Jeff puts it. We get so carried away talking about how this issue is terrible that… 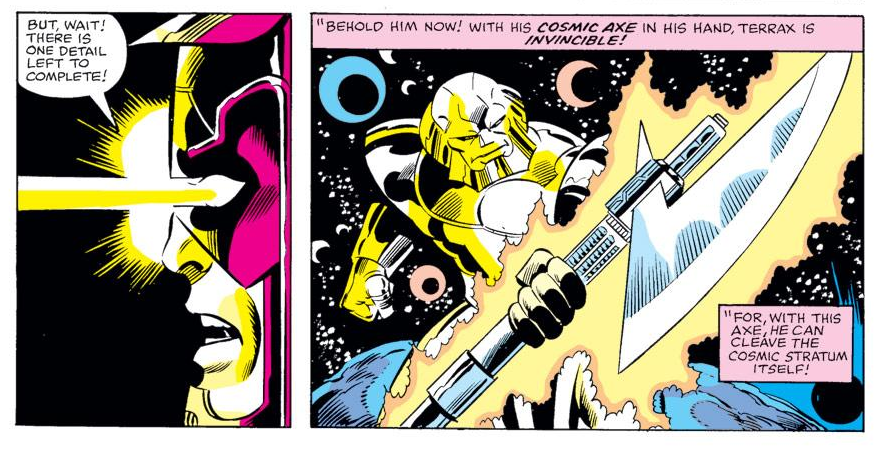 1:30:48-1:35:31: “Have we moved into #211?” I ask, genuinely uncertain about where we are in the order at this point. (I told you this was a punchy one.) Hey, guess what? There’s a despot who’s secretly a coward but it’s not a cliche because he’s… in space…? Or something? The first appearance of Terrax is, in the words of Jeff, “ridiculous errand-fetching, all the most dull parts of video games jammed into one dull storyline,” but it’s okay: the Sphinx is really taking his time in destroying the Earth (or even getting there in the first place). It’s not all bad, though, because the early Byrne/Sinnott art provokes some John Byrne nostalgia in Mr. Lester. “I gotta take from this what I can,” he says, and if it has to be nostalgia for the glory days of someone who has since become one of comics’ grumpiest creators, then that’s what it is. 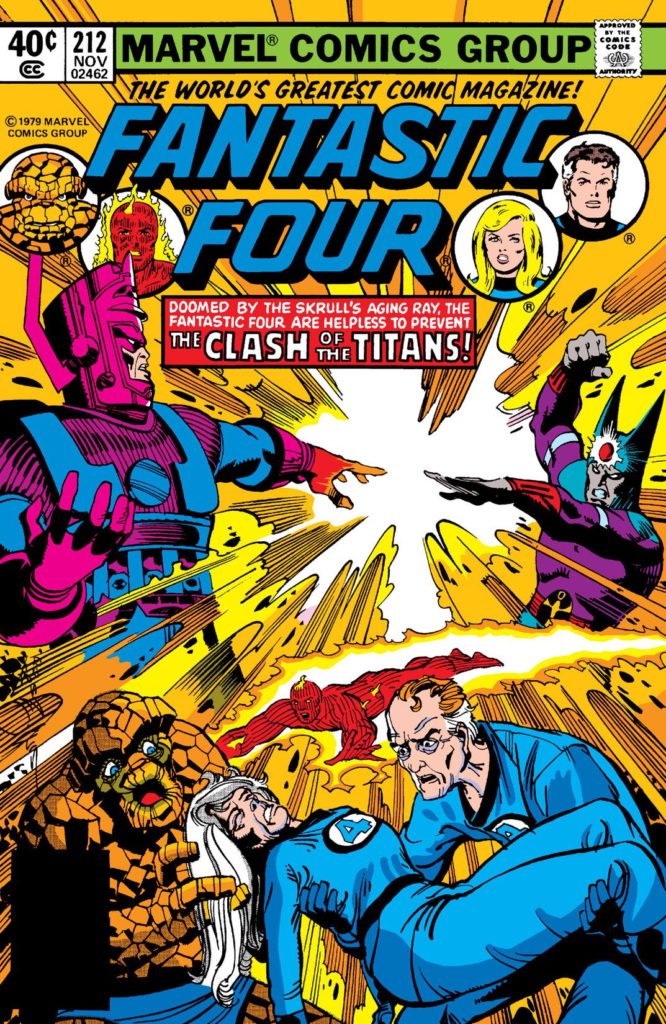 1:35:32-1:40:25: You might think that Fantastic Four #212, which is actually titled “The Battle of the Titans!”, would feature… you know, a battle between titans. Especially when Galactus and the Sphinx are on the cover — by Walt Simonson, and the subject of much derision by Jeff — actually fighting, but guess what doesn’t actually happen in this issue. Yes, Marv Wolfman continues to play for time by recapping the Sphinx’s origin one more time, bringing in the Watcher to play for time and just generally taking far too long to get to the point. There is, meanwhile, some joy to be found in just how petty Terrax turns out to be, even when gifted with the Power Cosmic.

1:40:26-1:51:17: We slide all-too-easily into FF #213, which I favorably call “a fascinating finale,” in part because of a coloring error that gives Galactus what Jeff calls “Felix the Cat eyes.” What should be an exciting issue ends up feeling as if it’s going through the motions in the least interesting way possible, to the point where we start talking about whether or not these are comics that are responsible for the overall bad reputation for Marvel’s late ’70s/early ’80s output. If nothing else, it devalues the very ideas and characters it’s playing with, and makes everything more hollow as a result. Oh, and there’s a denouement between Galactus and the Fantastic Four that kind of makes no sense, because… honestly, I suspect because no-one was really paying that much attention anymore.

1:51:18-1:57:16: How do we sum up Fantastic Four #214, the (thank God) final chapter of this all-too-long epic? “What do you think of it, Jeff?” I ask. “Oh my God,” Jeff groans in pained tones. Sounds about right. There’s a robot Skrull and the second appearance of a strange wannabe-trope that ensures that the F.F. are back and better than ever in just over a year, but does any of that distract from the fact that the problem that launched the whole thing in the first place remains entirely unresolved? Not in the slightest.

1:57:17-end: We take an overall look at the issues we covered for the episode and talk about low points in the Fantastic Four and what’s coming up soon — including, very soon, a Doug Moench/Bill Sienkiewicz run that Jeff didn’t even know existed. Was this run something that provoked Jim Shooter to do away with Marvel’s writer/editor role, and in the process create the Marvel comics of the 1980s, and was that era really as bad as people said? We touch on this briefly before reminding you to check out our Twitter, Tumblr and Patreon and telling you to read up on Fantastic Four #215-231 for the next episode, which will happen in a month. As always, thank you for listening and, this time around especially, making it through until the end.