Previously on Baxter Building: We’ve made it through the wilderness years, which was perhaps a fitting way to spend 2016 in retrospect. But now, we’ve finally arrived at the point in our read-through of the first volume of Marvel’s Fantastic Four where the second classic run begins! Ladies and Gentlemen, Mr. John Byrne. 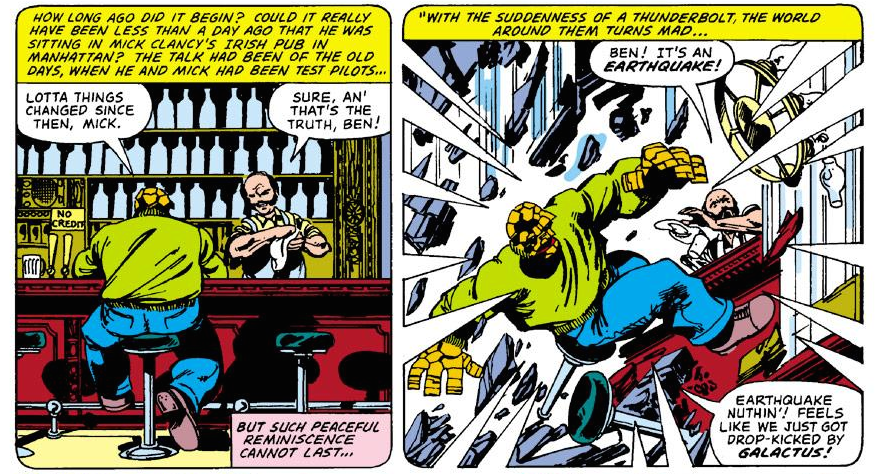 0:00:00-0:03:11: After a few episodes where we really tried to get through as many issues as humanly possible, we’re taking things easier this time around, covering Fantastic Four #232 through 237, A.K.A. the first six months of John Byrne’s run. Surprisingly to both of us, we both really enjoyed these comics, so let’s chalk this up to a successful 2017. Wrap it up, people, we’ve already peaked. 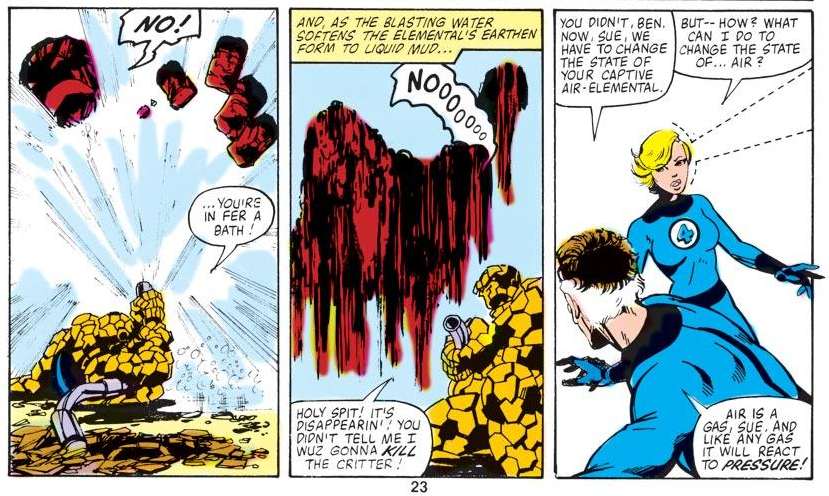 0:03:12-0:25:43: We slip right into a discussion of the first John Byrne issue, Fantastic Four #232, via a brief discussion of anagrammatic pseudonyms, but there’s a lot to be talked about here, as Byrne follows through on his promise to take the book “Back to The Basics.” It’s a surprisingly packed issue as each character gets a chance to shine and reintroduce themselves to the audience without things seeming overly expeditionary, and we get the return of Jeff’s and my least favorite Reed Richards! All this, plus the also-return of Frankie Raye (who might be the new Crystal or a color-swapped Gwen Stacy), and a reminder that other people live in New York City.

0:25:44-0:39:09: FF #233 and the following issue “are very non-Fantastic Four stories,” I say, and I stand by that: this issue is a Human Torch solo story that mostly avoids super-villainy in favor of a morality play as Byrne plays with both expectations about the series and some formalist elements. (A silent, black and white flashback that feels very “comics.”) All this to continue the task of redefining the Fantastic Four as something that exists within a larger community context! As Jeff puts it, “it’s not just a surprisingly good done in one, Byrne puts a shit-ton of effort into it.”

0:39:10-0:53:03: And if #233 was a change of pace, Fantastic Four #234 is… well, it’s a Will Eisner Spirit story that guest-stars the Fantastic Four. It opens with “the most Will Eisner narration that Will Eisner never wrote,” as I put it, and continues from there, mixing in the near destruction of New York City and the death of countless people, all seen through the eyes of a schlub who’s far more powerful than he knows. We dig into the Eisner-isms, the joys of the issue’s dual feints, and Jeff’s theory about just what the idea of an all-powerful man who doesn’t know how strong he really is really means. All this, and the sensational character find of 1981: the skeevy son of the issue’s protagonist. 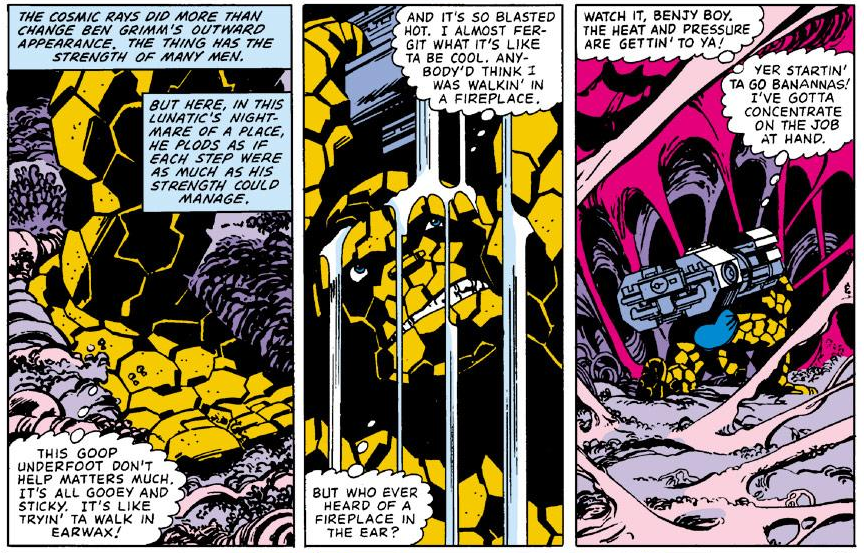 0:53:04-1:06:36: After the previous issue’s off-kilter tale, FF #235 opens with a very obvious tribute to Fantastic Four #4, of all things, although that just sets us off on a brief discussion about why Byrne’s run looks so un-Kirby-ish. Is this, as Jeff puts it, “the flip side of the cover band approach we’ve seen up to this point,” and is he correct that Byrne, by this point in his career, had to live up to his own reputation even more than he did the Lee/Kirby legacy? Even beyond that, we talk about how amazingly packed this issue is — “this issue is plotted like a motherfucker,” as Mr. Lester says — and, not for the only time this episode, talk about how much John Byrne is fueled by jealousy of Chris Claremont. 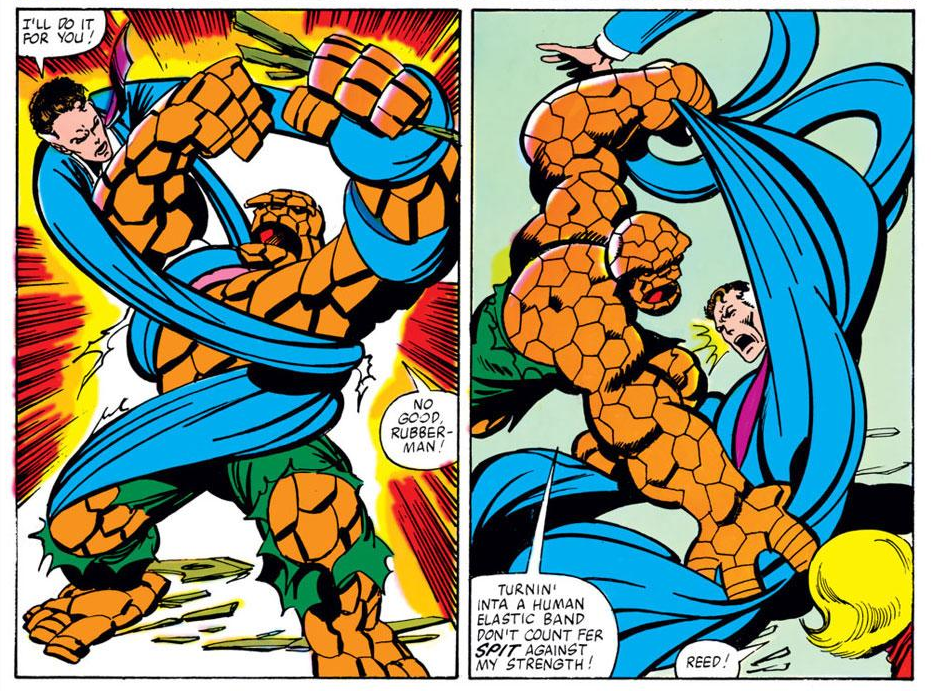 1:06:37-1:35:54: Fantastic Four #236 is the series’ 20th anniversary issue, and that means… Well, for one thing, a genuinely terrible “return” from Stan Lee and Jack Kirby, collaborating in the same way that I would be if I redialogued all the Roy Lichetenstein rip-offs. (Wait; I have a great idea.) “I don’t think I can convey how utter batshit this is,” Jeff says, more kindly than he needs to be about the genuinely appalling quasi-collaboration, but not to worry: Byrne continues his run of great stuff with a main story that takes the Fantastic out of the Four, and shows us what’s left. Considering that’s what’s left is some great, subtle character work for Ben Grimm, the completely unsubtle greatness of Vincent Vaughn and a reminder that the Puppet Master is scarier than you think. The highlight of the discussion, though, is Jeff’s theory that Doctor Doom (and by extension, John Byrne) is dissing Jack Kirby’s Jimmy Olsen run at one point in the story. Surely not. And yet… maybe…? 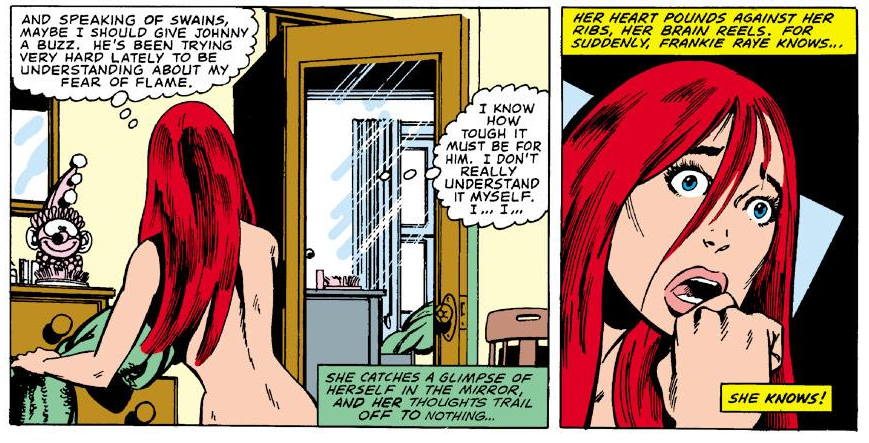 1:35:55-1:38:48: Before we move on to the next issue, I suddenly remember that I haven’t talked about the Frankie Raye subplot in the last few issues, which basically boils down to Frankie discovering that taking off your clothes can be shocking. It’s much funnier in Danish, believe me. 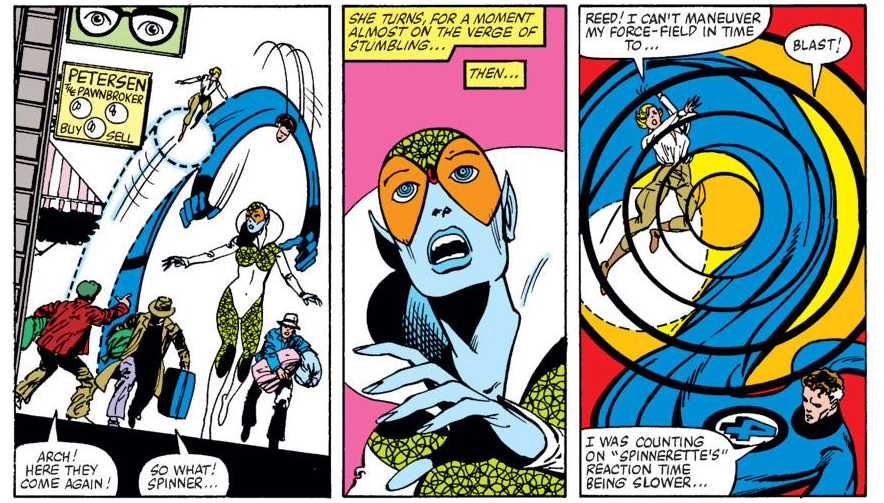 1:38:49-1:55:08: While the main story in FF #237 isn’t the best — there’s an alien and some misunderstandings and intoxication through breathing! — the issue is nonetheless fun thanks to some good character moments and our perhaps misplaced joy at the return of Reed Richards, Science Dick: a man who thinks that the best thing to do with someone in a coma is to stick them in a very dark box, because, sure. Why not. Meanwhile, Ben Grimm is feeling bad about sex, and so turns to weightlifting for some relief in a sequence that only Jeff Lester understands. 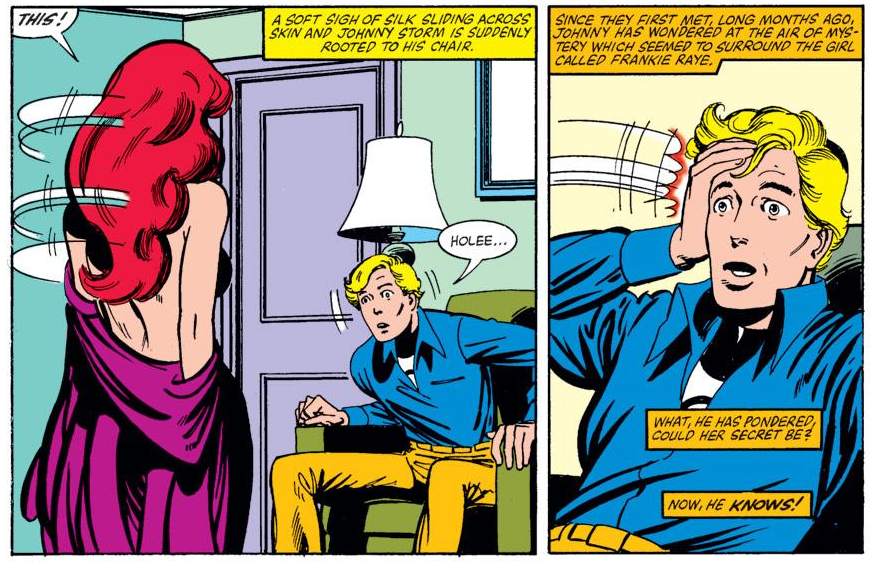 1:55:09-end: We look backwards and forwards, discussing how quickly Byrne has remade the series and wondering how important his earlier stint as artist was when helping him to work out just what the Fantastic Four needed overall. I go on about the ways in which his first six issues have moved the book away from pure superheroics, and why that attempt is different from what Moench and Sienkiewicz had just attempted, and then we look ahead to next episode, when we’ll take on Fantastic Four #238-247, featuring more Doctor Doom, the Inhumans and — just maybe — some more Byrne greatness. Until then, there’s always Twitter, Tumblr and Patreon to check up on. As always, thank you for listening and thanks for the patience of those of you waiting for the show notes in these deadline-troubled times!

4 comments on “Baxter Building Ep. 25: “Only My Dreams Are Kinda… Embarrassin’!””