Previously on Baxter Building: Technically, last time we covered a few years’ worth of annuals, but in terms of the monthly comic book, John Byrne has settled into a comfortable rut of retro attitude and safe, if enjoyable, storytelling. Anyone expecting that to change this time out will be disappointed. Just saying. 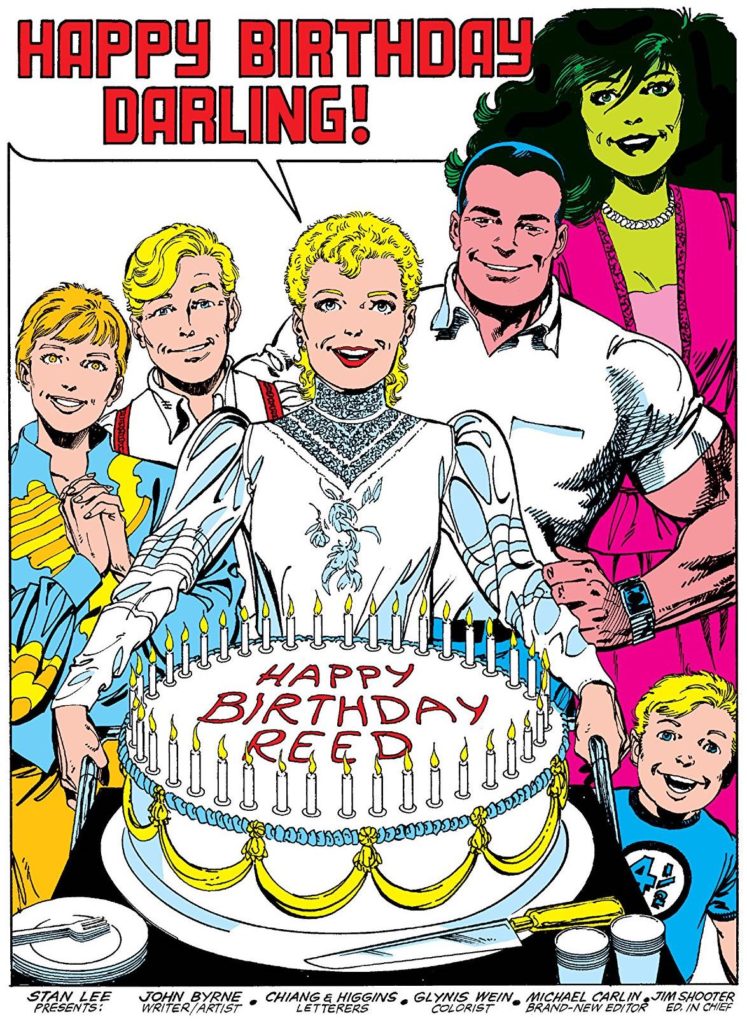 0:00:00-0:07:12: Welcome back to the show that never ends, dear Whatnauts. (Or, at least, won’t end until we’ve reached the final issue of this volume, and that’s aways away yet.) This time around, we’re covering Fantastic Four #s 271-277, a run of issues that prompts Jeff to consider just what writer/artist John Byrne is trying to do with the series, and why it isn’t better than it actually is. Is it a failure of ambition, talent, or both?

0:07:13-0:23:58: From there, we jump straight into FF #271 and the horror of Sue’s mullet, which Jeff believes fails to conform to the truest definition of the mullet form. Thankfully, there are other things to distract us from the follicle horror, including the undiscovered secret of Johnny Storm’s powers, the unknown wealth in Reed Richards’ family, and how much fun it can be to see Byrne channel 1950s monster comics in a flashback. All this, and a revelation about Reed Richards’ health that will… not be followed up on in future issues! Truly, this is the age of Mighty Marvel Forgetfulness! 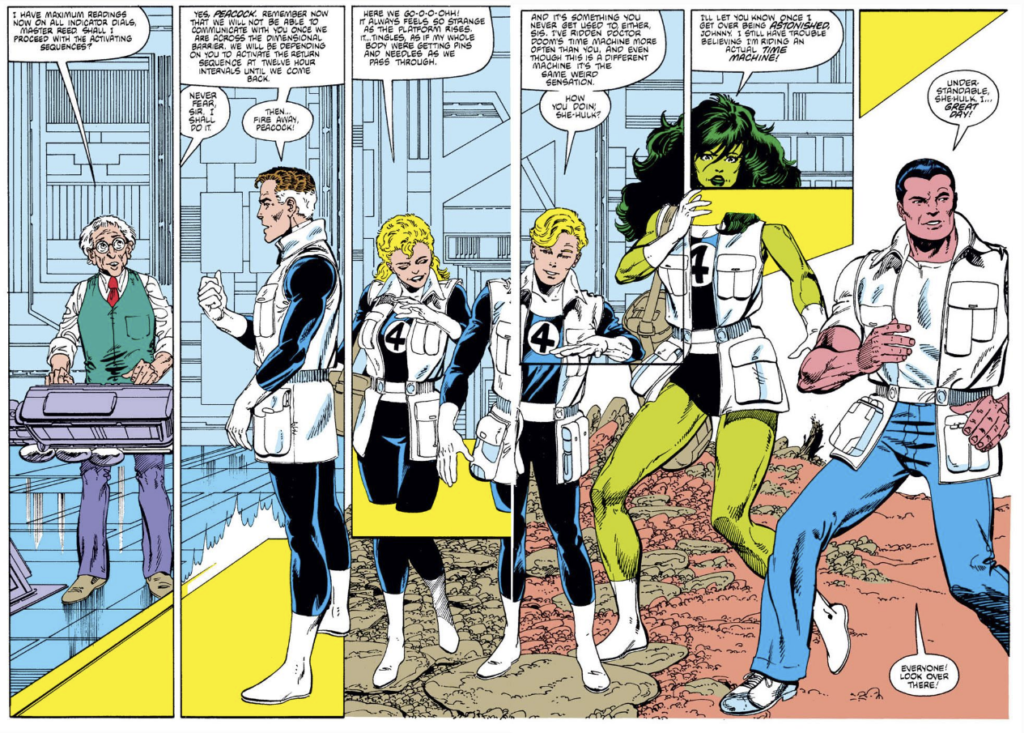 0:23:59-0:40:27: Fantastic Four #272 causes a schism as Jeff is left utterly cold and I am, well, warmer than lukewarm, at least. (I actually like the issue a bunch.) We talk about the ways in which Byrne is an unapologetic thief of other people’s ideas, iconography and images, as well as the strange mix of disappointment and potential that is Nathaniel Richards, and what that means for the parentage of the Fantastic Four as a whole. (Oh, and we digress a little about Byrne as artist, inspired by a note he writes to the readers warning that he’s about to start experimenting with his pencils. Spoilers: He doesn’t really.) Despite all of this, Jeff is adamant on the fact that the comic isn’t fun, because he likes, like, good comics or something. 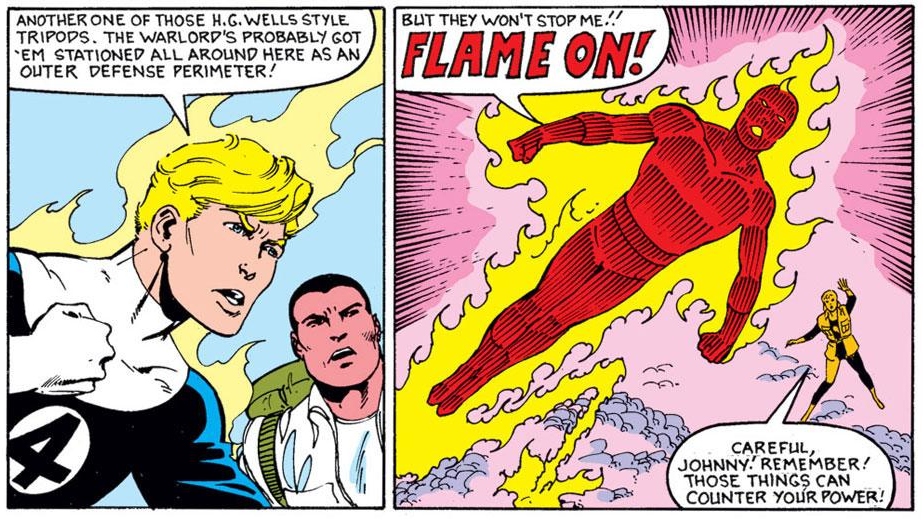 0:40:28-1:00:58: You know what isn’t a good comic? That would be FF #273, which closes out this trilogy with an especially subpar issue. What’s the blame? Maybe it’s the terrible lettering, provided by Byrne himself, although it’s far more likely to be the fact that even John Byrne can’t seem to bring himself to be interested in the story he’s telling here. “It’s amazing how much Byrne stops giving a shit,” Jeff says, and he’s not wrong. Nonetheless, we give some conversation the old college try, with Byrne’s potential desire to be a “fun cartoonist” and the actual, real history of the world. Oh, and this comes up, as unlikely as it seems:

All this, and a return of Jeff’s “shadow self” theory, but this time it’s not about Reed. Will wonders never cease? Actually, just wait until the next issue.

1:00:59-1:10:39: You can tell how interested Jeff and I are about Fantastic Four #274 — which I call “what can only be described as John Byrne’s weird attempt to try and raise sales of The Thing” — by the fact that we barely actually talk about the comic, which is to all intents and purposes a Thing story in the wrong title, instead spending time on Thing continuity around this time in general. But at least Jeff likes the art — this is the first of two issues inked by Al Gordon — even though I am unconvinced by his Barry Windsor-Smith comparison. 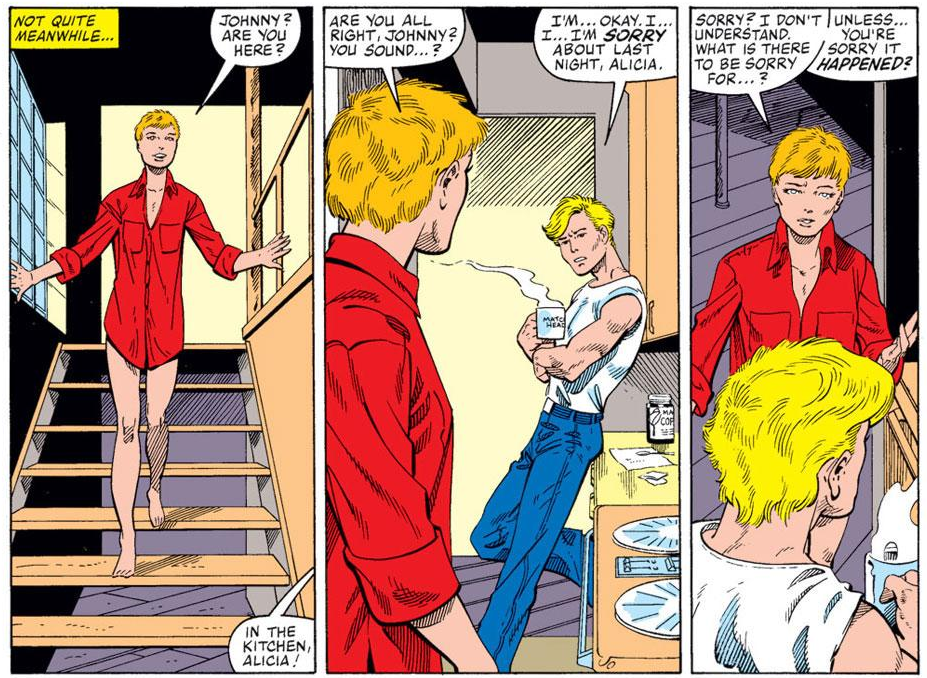 1:10:40-1:28:03: The infamous FF #275 sees the true, as Jeff puts it, Victorian nature of John Byrne come out: not only is this the “She-Hulk photographed topless on the roof of the Baxter Building” issue — a plot that is, to be kind, more than a little flimsy and tripped up by Byrne’s own objectification of She-Hulk — it’s also the issue where the true horror of Alicia’s Cursed Vagina of Shame is revealed, as Johnny and Alicia talk about their night before in an especially cringeworthy scene. There’s much discussion over the Alicia/Johnny pairing, and whether or not we buy it. Spoilers: we don’t. 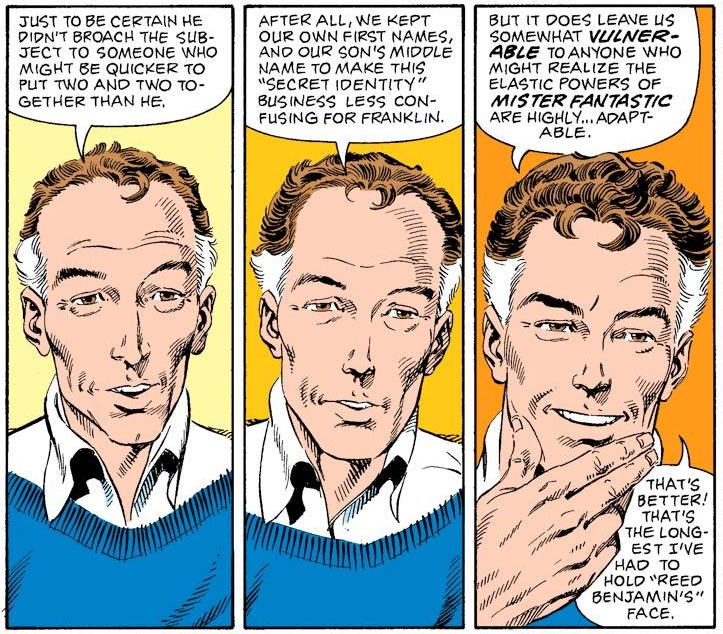 1:28:04-1:39:20: Running out of steam, we tackle Fantastic Four #s 276 and 277 pretty much together, which is mostly all that they deserve. Ostensibly a two-parter, there’s a lot of strange going on here, including the fact that the Thing’s return to Earth is covered in half of one issue that also happens to be a crossover with ROM Spaceknight (“Who gives a shit?” asks Jeff, which surely prompts at least one ROM fan to declare, “I do!”), and a Reed and Sue plot that goes nowhere not particularly entertainingly despite a Doctor Strange cameo. It’s not all bad, though; there’s a fun bunch of newspaper strip cameos, and the arrival of Jerry Ordway on inks is something that both Jeff and I find a great boon to the book’s look in general. Overall, though, things have been so much better. Is this the shape of things to come…? 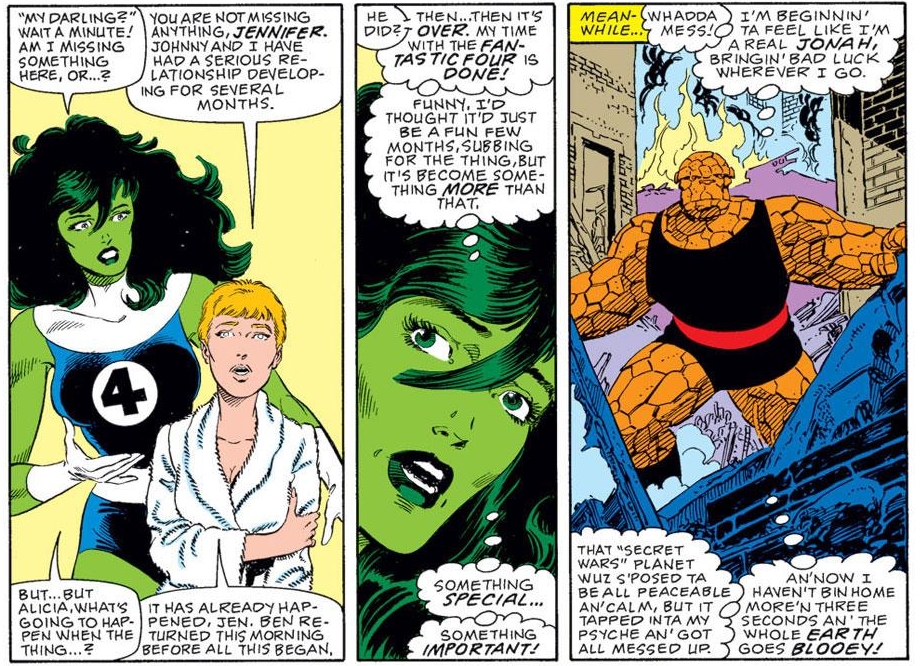 1:39:21-end: We wrap things up by looking ahead to what we’ll be covering next episode — FF #278-284 — and, en route to wrapping things up, take an entirely unexpected detour to discussing the roll-out of the first series of X-Factor and the way it was promoted. Quite how that happened, I have no idea. As you try to work that out, think about visiting our Tumblr, Twitter and Patreon, and know that you have our thanks, as ever, for listening and reading. Next week: Back to normal with a regular Wait, What?!