Previously on Baxter Building: The bloom has fallen off the rose for the John Byrne era of Fantastic Four, it has to be said. After an initial run of issues that got Jeff and I both excited, the series has fallen into a rut that undersells the genuine highlights of Byrne’s skills. Will things turn around this time out? 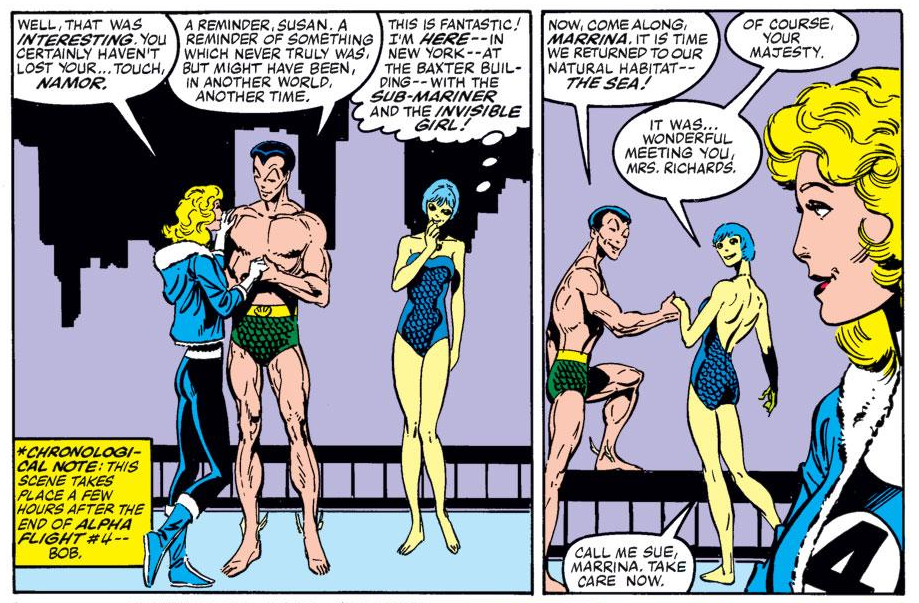 0:00:00-0:01:47: We were apparently so excited to get into these issues, we have the very briefest of introductions this episode. We’re covering Fantastic Four #261-270, which seems a lot of upheaval for the team, and a fill-in issue that I totally misunderstood. But we’ll get there soon enough.

0:01:48-0:16:35: You can perhaps tell how things are going to go when Jeff and I spend far too much time discussing Namor making out with Sue Richards and whether or not Uatu the Watcher is, as I describe him, “the greatest cosmic enabler in comics,” as opposed to talking about the actual plot of Fantastic Four #261. Clearly we don’t care that much about the rate of Reed Richards. (Although, given the time we spend talking about how Chris Claremont was the accidental instigator for this storyline, we equally as clearly do care about behind-the-scenes comics gossip. So it goes.)

0:16:36-0:41:41: With the Assistant Editor Month FF #262, John Byrne takes the opportunity to turn the book into The John Byrne Show for an issue, complete with a wonderfully passive aggressive dig at Chris Claremont as delivered by… himself. “It’s kind of a wacky issue,” I say, which might be an understatement, but we talk about the differences between Jack Kirby and John Byrne’s ideas of upping the ante, and Jeff comes up with a much better way of doing this exact story, which just so happens to build upon events of the previous issue in a more satisfying manner. As Jeff puts it, this is “a good Marvel comic in the way you mean it in a disparaging way.”

0:41:42-1:02:49: The two-parter in Fantastic Four #s 263-264 cause a schism in Team Baxter Building, as I think that they’re kind of shitty, but Jeff thinks that they’re — in his exact words — “really enjoyably shitty.” On the plus side, believers of Neal Adams’ theories of the evolution of our planet will find much to love in the scheme of “The Messiah,” while believers that Walt Disney was secretly an evil overlord are likely to be just as thrilled. (Jeff falls into one of those two camps, but I won’t spoil which one for you.) Mr. Lester also explains the appeal of appreciating the small stuff, when it comes to John Byrne’s work, while I get upset about a macro disappointment: that the final issue of the “regular” FF before She-Hulk replaces the Thing doesn’t feature the group together at any point.
1:02:50-1:10:43: An attempt to segue into Fantastic Four #265 goes awry, as we take a detour into the continuity of The Thing around this era of Marvel publishing, and I talk about what’s been happening in that title and the way in which it’s pretty much been More Fantastic Four, Kind Of for the first ten issues of its run. 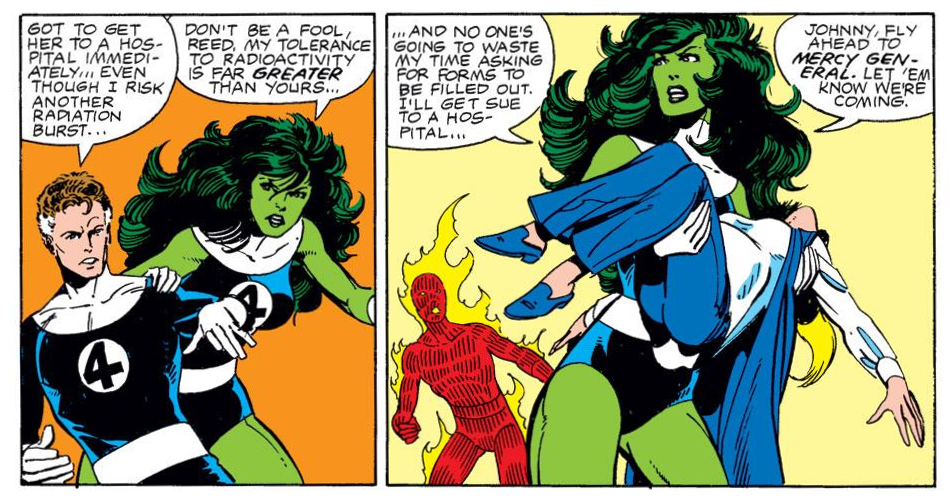 1:10:44-1:21:58: With Marvel Super Heroes Secret Wars getting underway, FF #265 — we got there eventually — ends up being an extremely disjointed and disappointing issue, no matter how much I might have liked the slice-of-life element of the issue’s second story. After all, there’s a terrible first story to deal with — which Jeff likens to Will Eisner’s work in an impressive moment of cruelty — and then a rushed cliffhanger to the second that really doesn’t land. But, hey! Welcome to the team, She-Hulk! 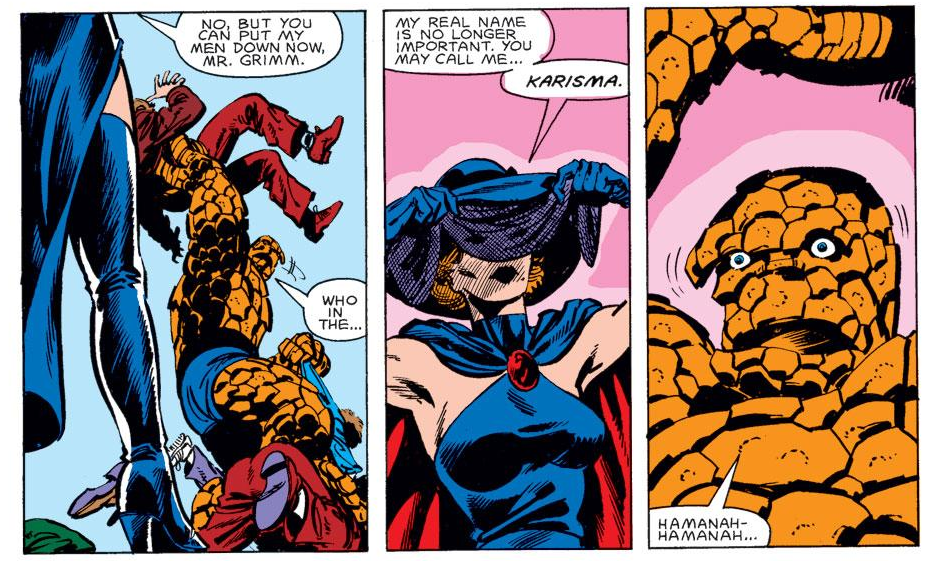 1:21:59-1:33:22: Truly Fantastic Four #266 is a banner issue in which there’s a fill-in returning Ben Grimm to the book one issue after he was replaced on the team, and I misunderstand the denouement of the story entirely. (My version of the big reveal was much funnier, and I have to admit, I like the story less now that I know the truth.) Under discussion: Would Sue Richards be the best thief? What is the difference between invisible and not visible, and does even John Byrne know? Also, why does Jeff hate puns so? 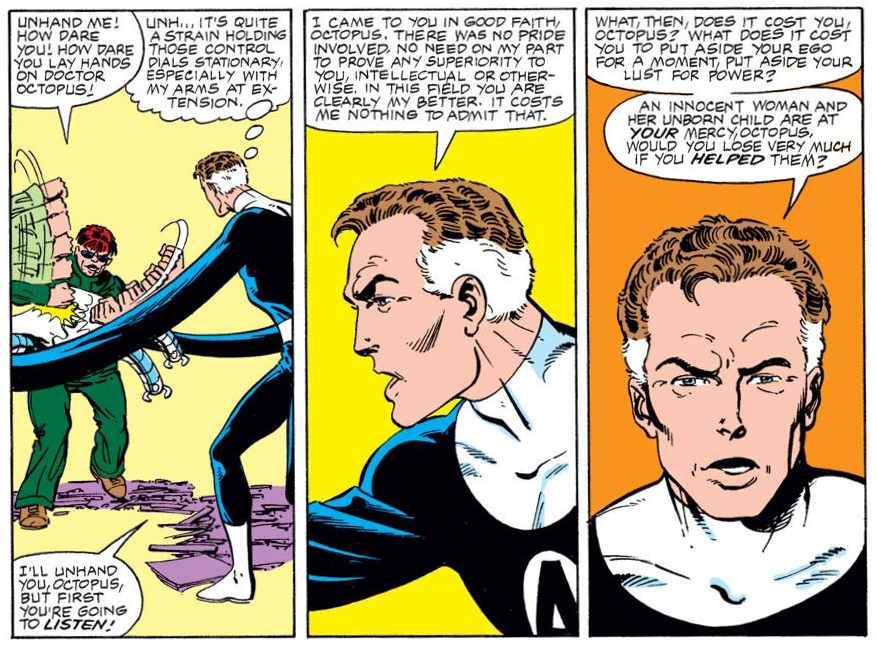 1:33:23-1:48:57: To say that neither Jeff nor I appreciate FF #267 is an understatement; I’m deeply upset by using miscarriage as what is essentially a Macguffin for a superhero comic, while Jeff doesn’t appreciate the way in which the story is really all about Reed instead of Sue, and wonders whether this is something that inspired Watchmen. (Lord, I hope not.) It’s a trite issue that, in Jeff’s words, underscores “how much Byrne’s interest in Sue really does feel like a sham,” and one that reduces a genuine real world tragedy into little more than cheap melodrama to fuel male comic book angst. Nope, in other words.

1:48:58-1:55:40: “Let’s continue the grossness,” I say, as we journey into Fantastic Four #268, and oh boy, do we. Sue gets literally two lines of dialogue as the follow-up to her miscarriage focuses on how neat the Baxter Building is, how bad-ass Reed Richards is even while grieving, and watching a mask kick the asses of half of the team. It’s old school superheroics the way that nobody quite wanted at this particular time, and as Jeff puts it, “it’s a very minimizing issue in many ways.”

1:55:41-2:13:42: With the end creeping up on us, we speedily cover FF #s 269 and 270. “It’s what I want from the Fantastic Four,” I say at one point, and what I mean by that is, “relatively fast-moving dumb sci-fi with Wyatt Wingfoot returning and a good conceptual gag or two.” It’s pretty much Byrne-by-numbers as Terminus shows up to demonstrate that it takes more than a dramatic name and reasonable design sense to recreate the glory days of the Lee and Kirby run, but it’s good enough for me in the context of recent issues to convince me. Jeff, meanwhile, is less impressed, making this the mirror image of FF #s 263-264. Now we know what we both like, it seems…
2:13:43-end: As we slide towards the close of the episode, we talk about the way our expectations of Byrne’s work on the comic has changed, and of our shifting definitions of quality. Are we being beset by creative Stockholm Syndrome, or is something else happening? We also reveal that we’ll be covering Fantastic Four Annual #s 14-18 and What If? #36 next month, and remind you to visit our Tumblr, Patreon and Twitter, because who doesn’t want to be recognized every now and then? Next week: an all-new Wait, What?, but Patreon supporters might get something extra midweek as long as my schedule doesn’t blow up. (Note: This is not impossible.) As always, thanks for listening and reading; it’s much appreciated. 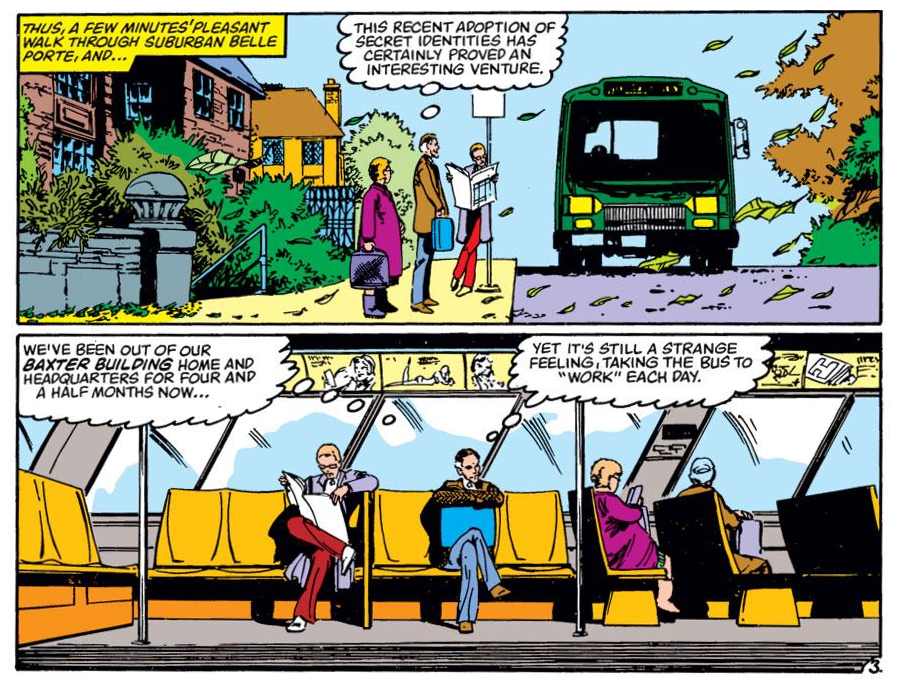