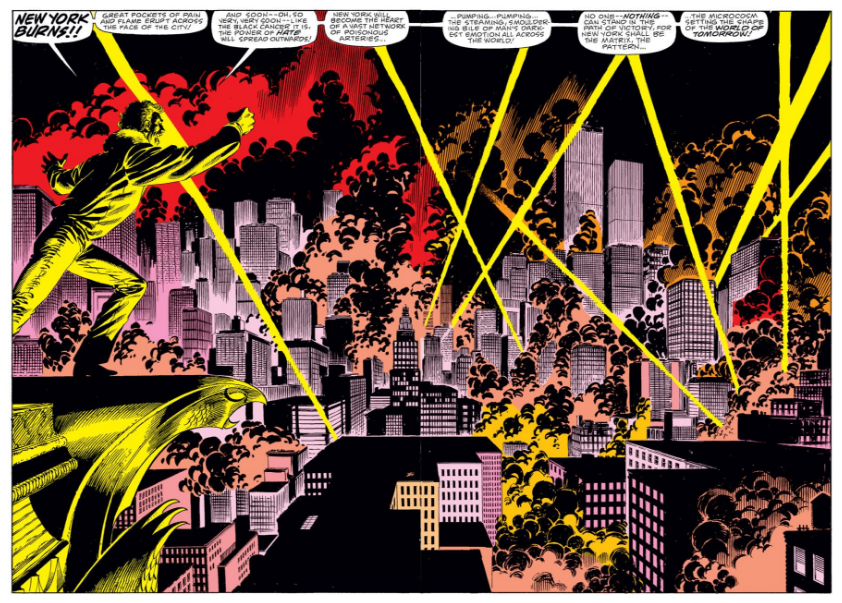 Previously on Baxter Building: The Thing is gone! She-Hulk is here to stay, despite topless sunbathing on the Baxter Building roof! And the series has brought on Jerry Ordway to ink John Byrne’s pencils, and the comic looks better than it has done in some time as a result. Which is a good thing, because what’s to come is pretty ugly, when it comes down to it.
0:00:00-0:07:45 After a Skype-enabled false start, Jeff and I get down to work analyzing what’s to come in Fantastic Four #s 278-284 — issues in which John Byrne definitely intends to make one, if not more, Serious Points About Things. (Not Ben Grimm, he’s still out the book.) The problem being, the execution doesn’t exactly follow through on the ambition. As Jeff puts it, “It’s not so much like he gave up, but…” 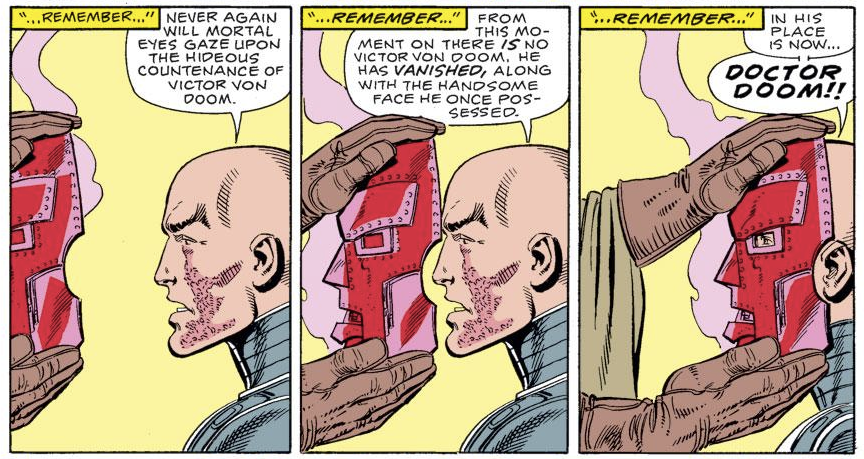 0:07:46-0:25:50: We get started with Fantastic Four #278, in which Doctor Doom returns (Kind of), but we’re far more interested in the fact that John Byrne apparently lost a bet and had to use the word “Remember” as often as humanly possible, the rewriting of Doctor Doom canon and an epilogue that only hints at the troublesome to come. But before we’re done with the issue, there’s one thing I really wanted to talk about…
0:25:51-0:33:31: …and that’s an editorial note in the letter column for the issue that is, essentially, a pre-emptive apology for the racism in this issue and the next one. Jeff and I talk about why the attempt at an explanation and defense ring hollow, and the ways in which this storyline wants to have its sensationalism and eat some holier-than-thou-ness, too.

0:33:32-0:54:57: FF #279 brings with it some anti-nostalgia for me; despite this being the first actual Fantastic Four issue I bought way back when, I really hate it in large part because of its overlong opening sequence. Jeff is far more understanding, although he wishes there had been more Doom, which isn’t an unfair criticism. We also talk about where this larger plot is going (or, as the case may be, not going), tease the Steve Englehart era, and get into why the Hate Monger plot is quite so ugly. (We keep talking about an X-Men issue when discussing this subject; we don’t say it in the episode, but it’s Uncanny X-Men #196, for those wanting to go track it down.) 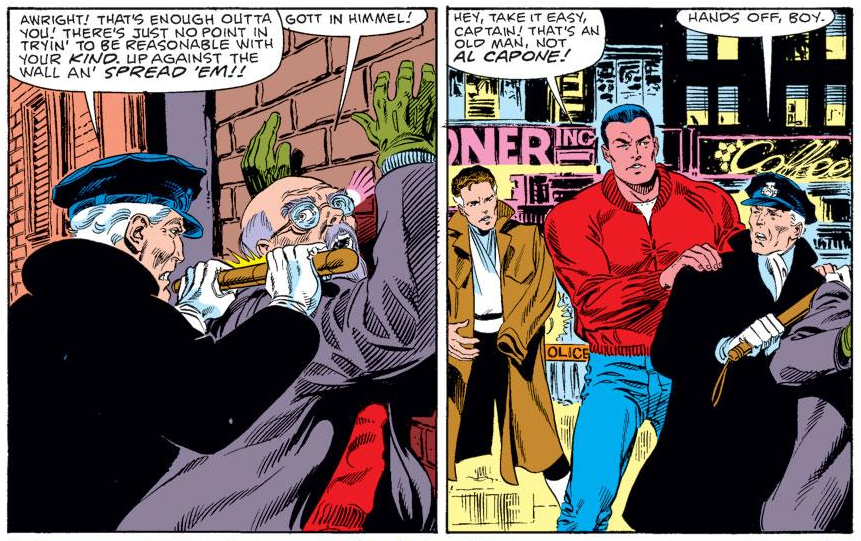 0:54:58-1:15:32: Face it, true believers, Fantastic Four #280 has it all, as long as your definition of “it all” includes a surprisingly shoddy cover and some questionable stereotypes popping up as John Byrne attempts to build his “Oh No Men Are Racist But Especially When Aliens Are Involved” storyline. Jeff and I talk about all of that, the failure of Byrne to fulfill his own aims, the surprising (but welcome?) cowardliness of the issue when it comes to hate speech when compared with the previous two issues, the return of Reed Richards Patriarch At Large and, of course, the first appearance of Malice. Don’t forget: comics aren’t even for kids anymore. 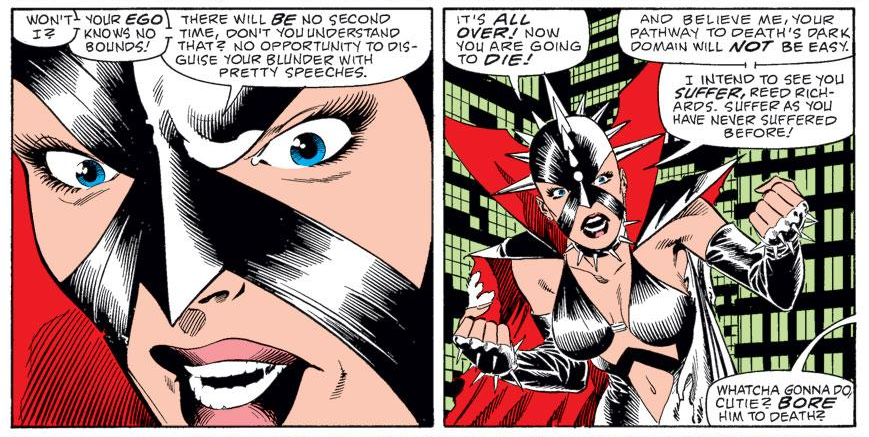 1:15:33-1:29:45: There’s a lot to dislike about FF #281, including a horrific conclusion — that boots the end of the Hate Monger thread over to another comic entirely — and Reed Richards saving the day through being a misogynist. There’s also the fact that neither Reed nor Johnny recognize Sue when she’s being Malice (including, as Jeff points out, Johnny pointing out how hot this new villain is), Jeff and I talking about whether or not I’m reading too much into this plot being the culmination of a thread that started back when Sue had a miscarriage, and whether or not this entire storyline is trash. (Spoilers: It is.) 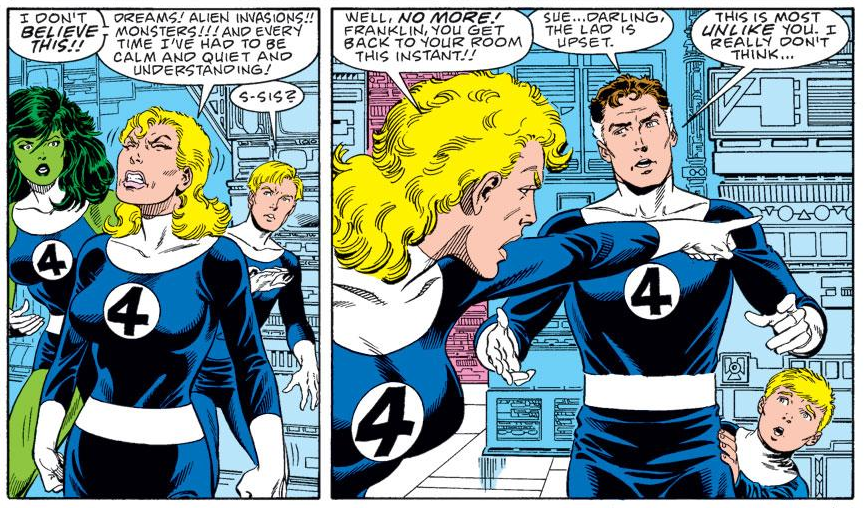 1:29:46-1:47:54: Considering everything ended with a big cliffhanger in the last issue, Fantastic Four #282 has to start with excitement right out the gate, right? Or, you know, a multi-page, mostly silent dream sequence for Franklin that is basically an advertisement for Power Pack. That John Byrne! Always zigging when you expect him to zag, or perhaps provide a coherent reading experience that doesn’t ask you to read multiple other comic books! Jeff did his homework and explains what happened in Secret Wars II as it relates to this issue, while I come up with conspiracy theories and we discuss whether it’s easier to get to the Microverse in a hot water bottle or a hip flask. Oh, and the mullet. The mullet. 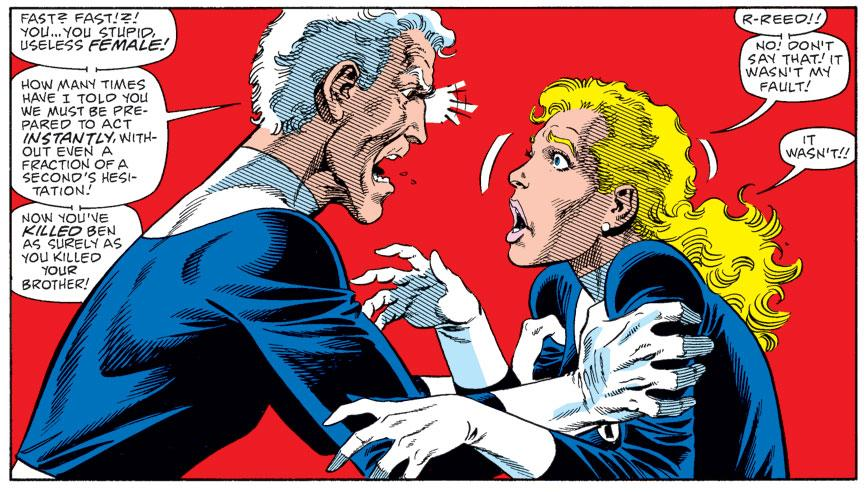 1:47:55-2:08:36: Talking about FF #s 283 and 284 somewhat run together, as we run out of both time and patience with the storyline when it hurtles towards its conclusion, but there’s still stuff to talk about here — including a dream sequence for Sue that might be the most interesting thing in this entire episode, and provide a key as to how Byrne sees the character, and also Byrne’s horrendous treatment of She-Hulk that pretty much undercuts whatever larger point he was trying to make around Sue in the first place. (One of the sad things about the fact that we were tired at this point is that neither Jeff nor I pointed out that Sue’s Nightmare Reed talks very much like the real Reed did when trying to break the Malice persona, interestingly enough.) Also, given that Byrne purposefully leaves out what Sue actually did to Psycho-Man, we come up with a couple of possible, if somewhat unlikely, alternatives. (Spoilers: the Malice costume comes into play more than might be expected here.)
2:08:37-end: So, how were these issues overall? According to Jeff, they make “for some really distressing reading,” which… doesn’t feel like that much of an overstatement, to be honest. We look ahead to the issues we’ll be covering in the next Baxter Building — #285-295, which finish off Byrne’s run — with some trepidation, while trying to work out why we both kind of enjoyed this episode’s reading despite knowing better. If you don’t want to join us on that particular emotional journey, perhaps you should check out our Twitter, Tumblr and Patreon instead, or simply tune back in next month for the end of another era. Until then, as always, thanks for listening and reading.