Previously on Baxter Building: Actually, forget any previouslies — while the last episode saw us get into the midway point of John Byrne’s run on Fantastic Four, we’re skipping out of continuity this time around to read some Fantastic Four Annuals. All you need to know is that the Fantastic Four exists, but the 1970s wasn’t the best decade for them.

0:00:00-0:11:06: We get into things pretty quickly, with the introduction about the fact that we’ll be covering Fantastic Four Annual #14-18 and What If? #36 turning into a brief discussion about the eternal disappointment of annuals in general: the possibility they offer and the way they almost never live up to that. 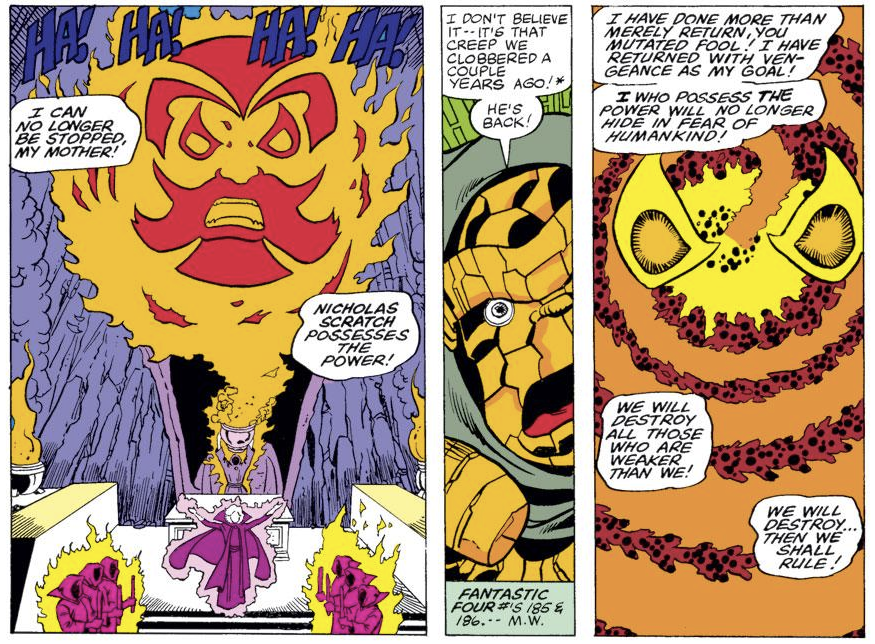 0:11:07-0:24:06: That brings us to Annual #14, in which Salem’s Seven returns, Agatha Harkness suggests the world’s worst vacation, and neither Jeff nor myself are particularly interested in a plot resolution that can be summed up as “Franklin Richards can love everyone so hard it stops the bad guys.” But we are slightly more impressed by the comic’s surprising Nighthawk representation, Iron Man’s sick burn, and Nick Scratch’s resurrection as Flaming Wario. Take the pleasures of life where you can get them, dear readers. 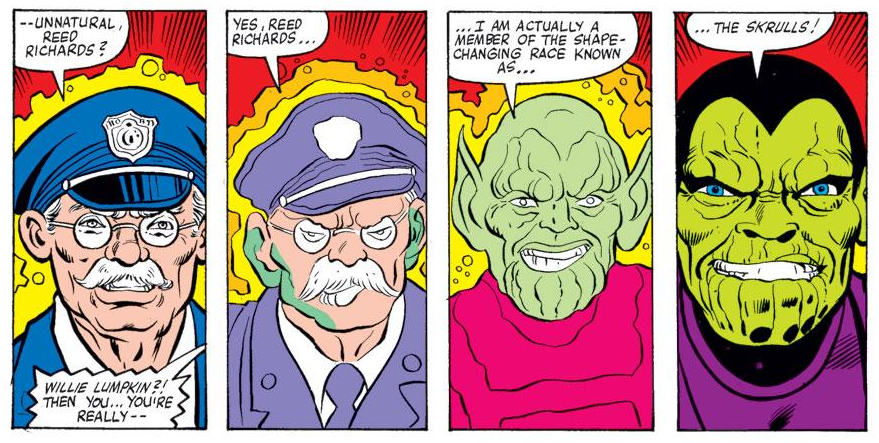 0:24:07-0:46:01: How much did we love Fantastic Four Annual #15? “If we only had done a Baxter Building where we were just discussing Annuals #14 and 15, you me and every one of our listeners would kill ourselves before the end of the episode,” Jeff says, and that’s about it. Because the meat of the comic is lackluster, we find ourselves discussing how disappointing Skrulls are in general, the specific disappointment of 2008 crossover Secret Invasion (and its similarities of DC’s Millennium) and the bargain basement Philip K. Dickness that writer Doug Moench brings to proceedings in this annual. But we did enjoy the back-up strip a lot more, which I then liken to the Return of Superman story from the 1990s. No, really. 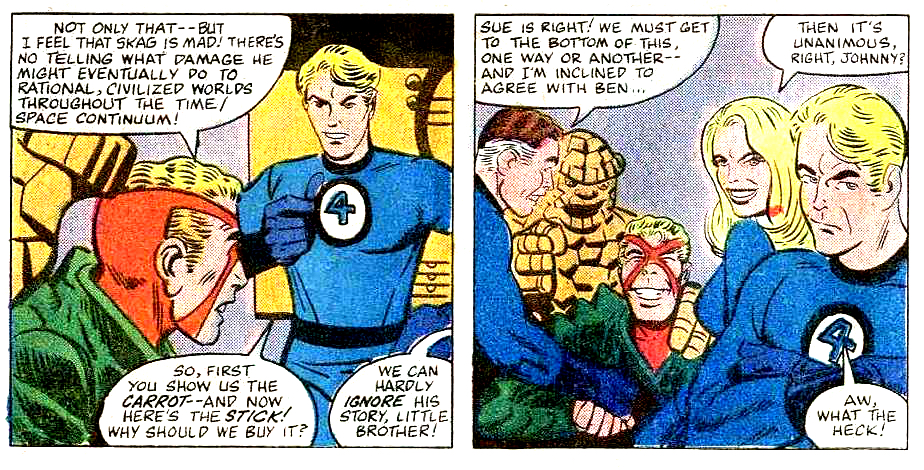 0:47:02-1:08:00: This brings us to Annual #16, which bears the shame of being the only annual in this run not on Marvel Unlimited… although, when you read the issue, you’ll understand why Marvel is happy to leave this in the virtual vaults. The powerhouse creative of team of Ed Hannigan and Steve Ditko deliver the Dragon Lord, AKA the sensational character find of 1981! “Jeff! Do you like this one? “It is migraine storytelling.” So, that’s a no? “I remember getting two-third of the way through this book and thinking, there’s fucking more?” Okay, then.

(We also discuss Jeff’s love of Avatar, my own Avatar PR experience, this annual’s similarities to Ditko’s Shade the Changing Man, and Jeff’s idea of how fathers and sons relate to each other. And then we read ads.) Jeff, one more time, how do you feel about this issue? “Depending on what your tastes are, FF [Annual] #16 is either a can’t miss, or a dear god, please miss.”

1:08:01-1:19:06: From the ridiculous to the… dull? Who could have suspected that John Byrne of all people would turn out to be too pedantic to fully take advantage of the “What If?” concept? What If #36 sees Byrne answer the question “What if the Fantastic Four had not gained their powers?” by writing the story, “Oh, they’d become a boring version of the Challengers of the Unknown.” I call it “an interesting oddity, but not an exciting one,” which on reflection might be far too generous.

1:19:07-1:32:27: By far the best issue of this episode, Fantastic Four Annual #17 sees John Byrne succeed in large part by completely ditching the eponymous heroes for half the issue and creating a surprisingly tense horror story in the process. I mean, sure, things fall apart when the F.F. do show up, bringing with them Byrne’s larger problems when it comes to the series, but still; the first half of this issue really is pretty great. Of course, because this is one of the most digression-y episodes in some time, we also manage to work in talk of both Skrull Kill Krew and the median age of Americans. Why wouldn’t we?

1:32:28-1:50:32: Finally, we arrive at Annual #18, which sees two great ideas brought together for one very mediocre comic book. Thankfully, we find better things to talk about, including the idea of Reed Richards as Marvel’s Great Cosmic Un-Fixer, Jeff’s amazing “Sad John Byrne” theory, and Grant Morrison showing up in (and being killed in) Suicide Squad. I said this was the most digression-y episode, right…?
1:50:33-end: As we wrap things up by badmouthing that which came before, Jeff reveals that I am Darth Vader to his Luke Skywalker and I get confused about just when the next episode is. We also wrap things up by reminding you to check out our Tumblr, Twitter and Patreon, and thank you for sticking with us. Also, Jeff really was remarkably sick while recording this, so let’s thank Jeff for sterling work, as well. A well-deserved round of applause for everyone, I think.