Previously on Baxter Building: After an impressive debut, the John Byrne era of Fantastic Four stumbled as the writer/artist completed his first year — but he certainly continued to be ambitious, bringing in some old favorite characters like the Black Panther, Doctor Doom and Galactus so early into his run. But what happens when his ambition outstrips his execution? 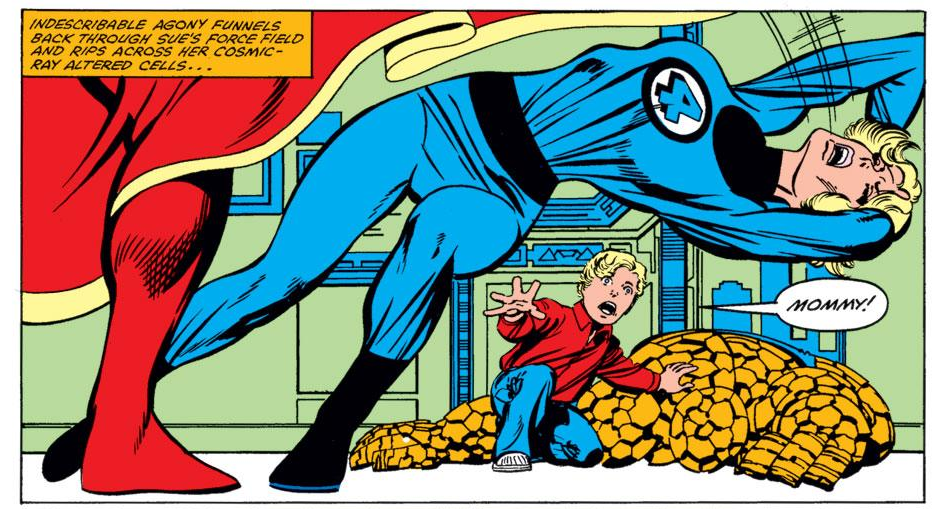 0:00:00-0:06:13: We launch into the episode by admitting that these aren’t the most memorable of issues, and that our happy glow when we think of the first Byrne episode is fading fast. We’re covering Fantastic Four #248-260 this time around, and it’s an uneven grab bag that mostly spirals down in terms of quality, be warned. 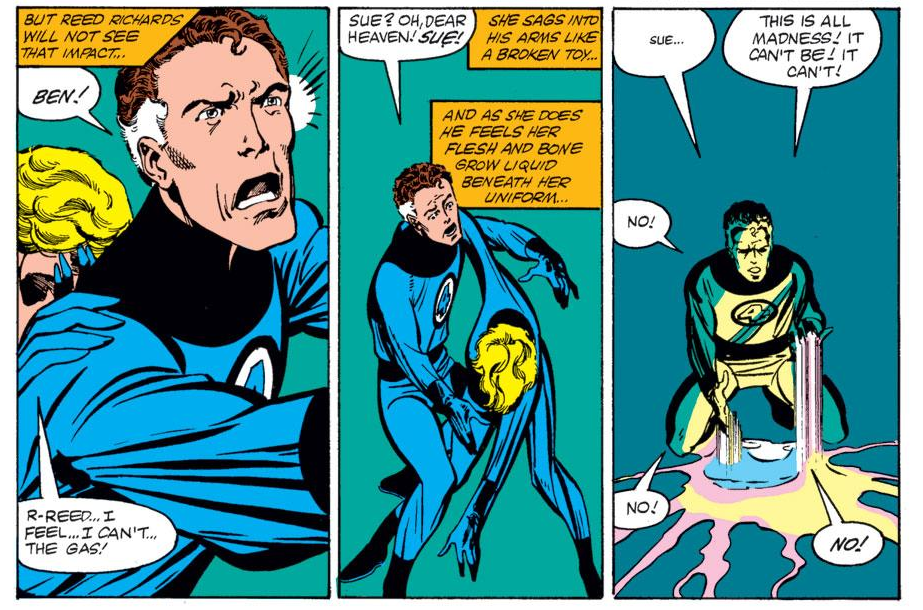 0:06:14-0:18:39: When is a story not a story? When it’s that laziest of things, a dream sequence. Enter FF #248, in which Byrne tips his hand way too early about whether or not what’s happening on the page is “real,” while also not being particularly bothered in setting up the context surrounding the whole thing. Why is Reed dreaming of Treens and Space: 1999? Just what is going on with Triton? Is all of the Marvel Universe a dream, when you really get down to it? (I mean, yes, but still.)

0:18:40-0:31:37: “This is when John Byrne moves into becoming Unfortunate John Byrne” says Jeff when referring to Fantastic Four #249, and he’s not just saying that because of some unfortunate layout choices. Nope, it’s the writing that we really attack here, because Mr. Byrne knows just how the Fantastic Four and its surrounding world should act and he’s here to make sure you understand exactly what he means, no matter how dull that might make a fight issue. Also, the worst cliffhanger of the Byrne run to date? That would be this one, leading into… 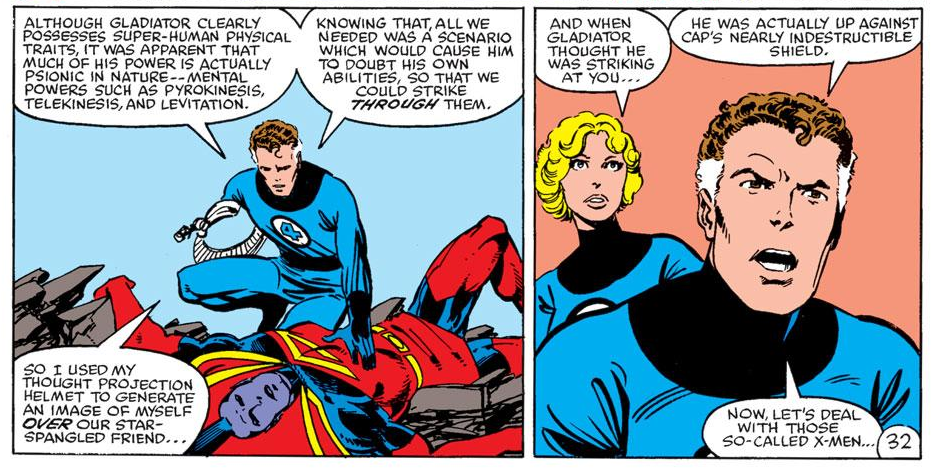 0:31:38-0:43:34: FF #250, which works best if you assume that (a) all anyone wants out of an anniversary issue is an appearance by the main cast, regardless of quality or common sense (Really, what else is Alicia doing in here?), and (b) that all superheroes are stupid and have never, ever met the X-Men ever before. On the plus side, we do get to get a preview of how John Byrne will approach Superman years hence, which isn’t exactly what anyone would have expected. And, as I note, as bad as this issue might be, it’s still better than what’s just around the corner. 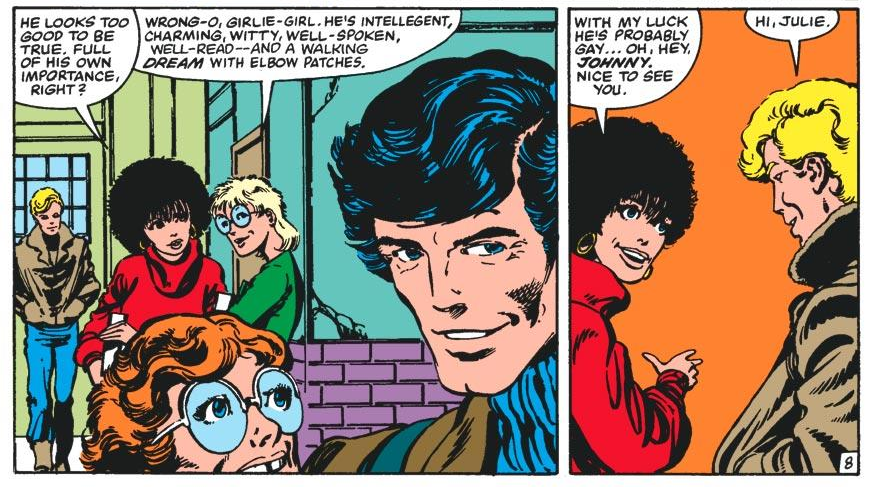 0:43:35-0:57:44: Fantastic Four #251 launches the you-won’t-believe-it-drags-on-so-long Negative Zone saga, which seems like a good idea but that’s because you’re imagining the best version instead of the Byrne version. This issue has a lot to recommend it, however, including some good “Day in the Life” stuff (and the introduction of Christopher Reeve, above), a toyetic and Tardis-like spacecraft, the best proof yet that John Byrne takes this stuff far too seriously, and a cliffhanger that couldn’t have been more lampshades if the dialogue had actually included the words “What about this guy we’re mentioning right now, do you think he’ll show up before the end of the issue to cause trouble? What are the odds?” Feel free to be as surprised as I am that neither Jeff nor myself tried to make “Byrne’s Annihilus” into the comic book version of “Chekhov’s gun.” 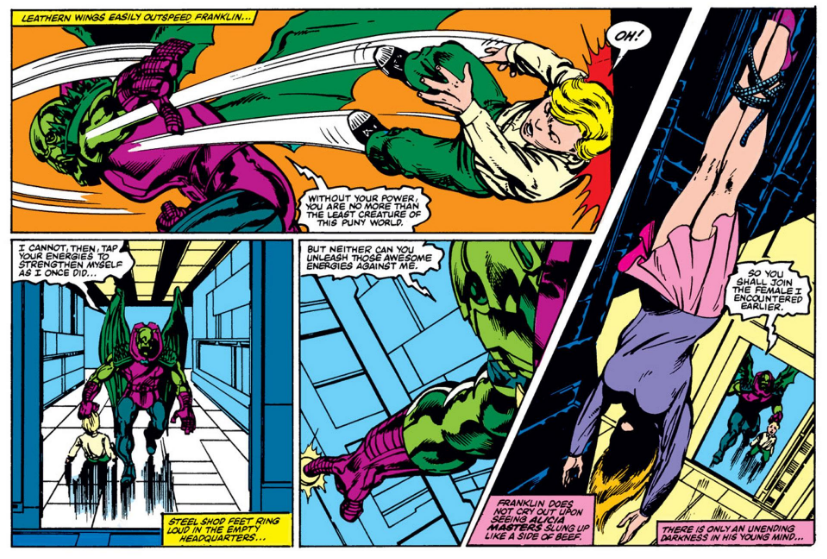 0:57:45-1:08:55: Everything goes sideways in FF #252, as Jeff tries (and fails) to make the argument that turning the page sideways to draw it constitutes an experiment, but that still might be one of the most interesting things about the issue. But at least we also get to see… Reed getting sick, which allows the rest of the team the only opportunity they have to fuck up…? Okay, maybe that’s not the most convincing argument in favor of the book. Welcome to the new era of surprisingly light, throwaway done-in-ones, everyone!

1:08:56-1:14:17: If nothing else, let’s take note that Jeff’s love of the splash for Fantastic Four #253 gives us a chance to say something positive about an issue that is, in almost every other respect, entirely throwaway, as if written by someone for whom “But what if it’s not?” is seen as a worthy plot twist in and of itself, separate from, you know, actually having a story attached on either end. That said, we do get to find out about Negative Zone pranks here, and let’s just be honest: Annihilus’s sense of humor is a thing of wonder.

1:14:18-1:24:07: Things pick up for all the wrong reasons in FF #254, which debuts the new catchphrase Jeff wishes that Reed Richards would adopt, while both of us agree that, for once, Byrne seems to get that all of the team are adults while also demonstrating that no-one ever wants to see a topless Reed using his powers ever, ever again. Who knew that pink stretching man would seem so much more gross than blue stetting man? And yet, now we have the proof. 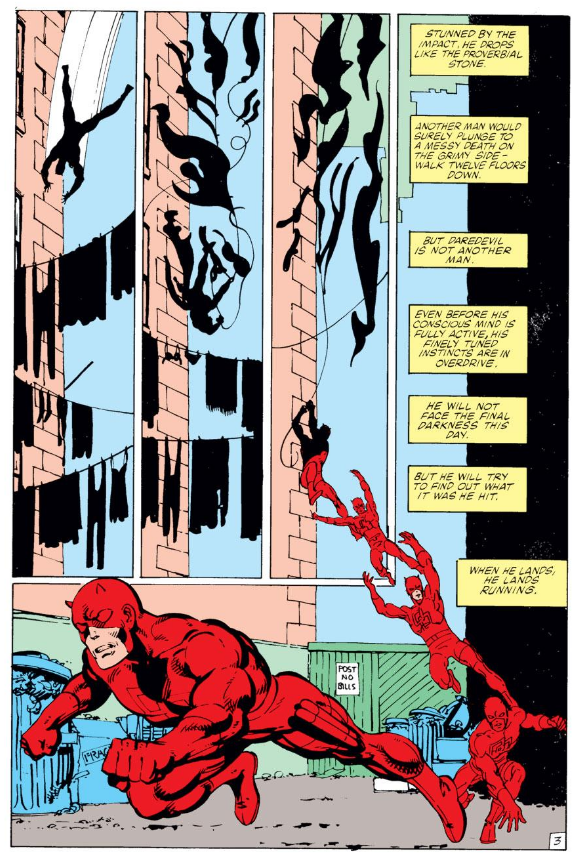 1:24:08-1:42:48: Perhaps reflecting our dislike for the way this plot line goes, we end up discussing Fantastic Four #255 and 256, and its crossover issue Avengers #233, all in one go. (The issue titles, which I think we skipped, are “Trapped” and “The Annihilation Gambit!”, if you’re bothered.) Under discussion: overly-purple prose when Daredevil shows up, the fact that it turns out to be trouble when your big climax hinges around a plot that no-one had really thought out (who knew?) and the arrival of the Byrne-era FF costumes, which come about because no-one apparently thought to explain to him that the “negative,” or inverse, of a black and blue costume would be a white and orange one. Annihilus, you deserved better than this weird plot line, even if you apparently couldn’t tell when people are alive or dead.

1:42:59-1:49:29: “Fragments,” AKA FF #257, lives up to its title with an especially scattered issue that feels very subplot heavy, but it’s actually doing the heavy lifting for what’s coming up in a few months. Meanwhile, I tell Jeff about The Thing #2, which ties into this issue despite that not being obvious anywhere in the issue itself. Oh, and Galactus destroys the Skrull home world, and it feels very much like the afterthought that I’m treating it as.

1:49:30-2:02:40: With both time and our attention span dwindling, we once again group a number of issues together, this time covering #258-260, which have a lot of things you’d think we’d enjoy more: A Doctor Doom spotlight issue centering on his psychological issues! The apparent death of Doom (although that’s obviously not the case, despite the fact that Jeff misses the get-out clause)! Three issues entirely without Reed Richards! And yet, our enthusiasm is dampened not only by the fact that Byrne himself feels less than enthusiastic, but also because one of the two antagonists of this storyline is the former Terrax the Tamer, a character who will never, ever be interesting despite how much creators feel otherwise. That we spend more time talking about Namor’s hair from a brief cameo sequence than how awesome Terrax is should be a clue.
2:02:41 – end: We wrap everything up by wondering just why these issues were underwhelming, and then looking ahead to next month’s episode, where we’ll go from #261 through #270. In the meantime, you can check out our Tumblr, Patron and Twitter, or simply return back here next week for a brand-new Wait, What?. As always, thanks for reading and listening, and sorry for everyone who got caught out by the faulty file uploaded earlier. Things are fixed now, honest!

13 comments on “Baxter Building Ep. 27: “This Is A Contingency I Had Not Calculated.””