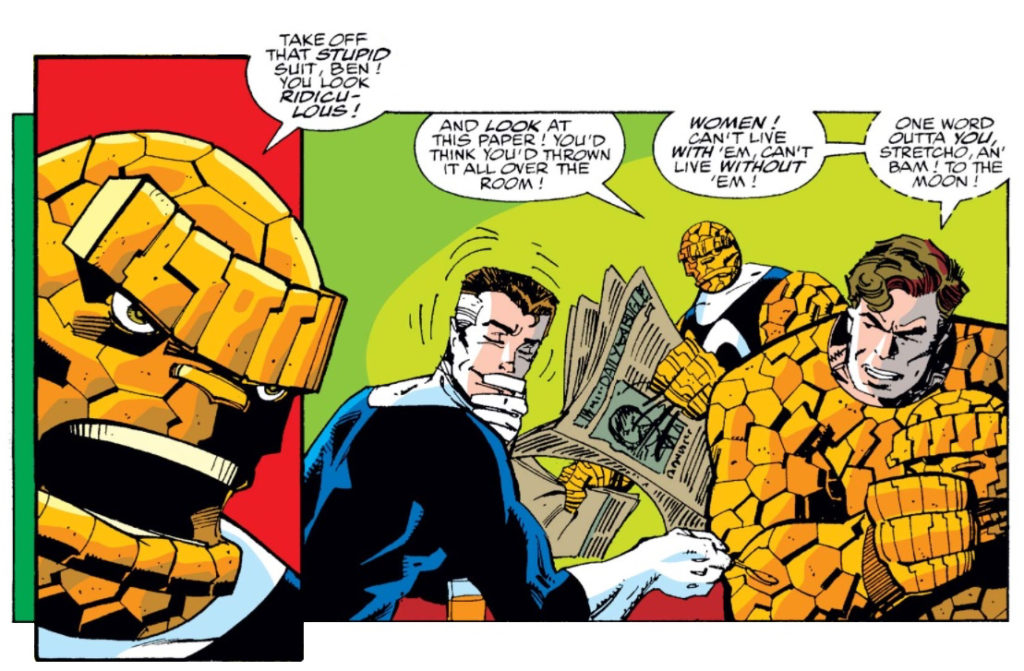 0:00:00-0:04:23: And so we return and begin again, introducing the issues we’re talking about this episode — Fantastic Four #350-355, AKA the final Simonson issues and two fill-ins — and once again, fail to get quite as excited about them as Whatnauts would like us to be. (I’m sorry. Honest.) 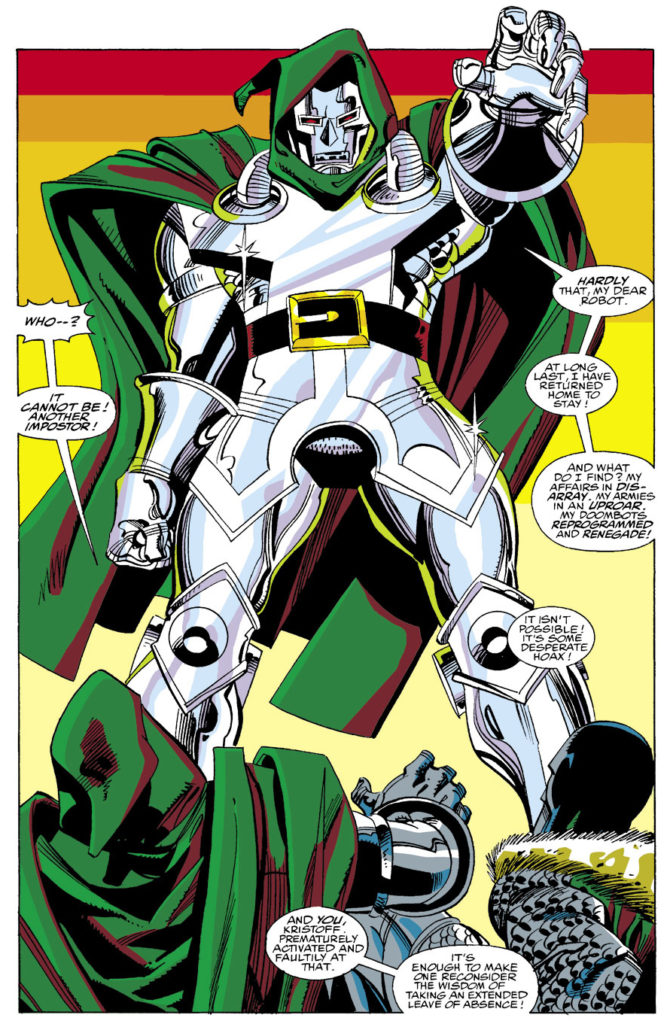 0:04:24-0:40:39: Fantastic Four #350 resolves a plot line that many had probably forgotten about — which Doom will rule Latveria? — in a manner that’s at once bold, exciting and endlessly frustrating, sending Jeff and I off on a discussion about what might be one of the most annoying issues of the entire Simonson run, on a number of levels. What price continuity? What price not putting in passive aggressive digs at other creators? We get into both questions, as well as quite how cool new Doctor Doom is, and quite how dumb this issue turned out to be. The discussion also includes, unexpectedly, towards Simonson’s weakness when it comes to drawing Sue Richards, but there are things that we like about it too, really. Also included: Is Baxter Building formally unkind to writers coming in and trying something new? 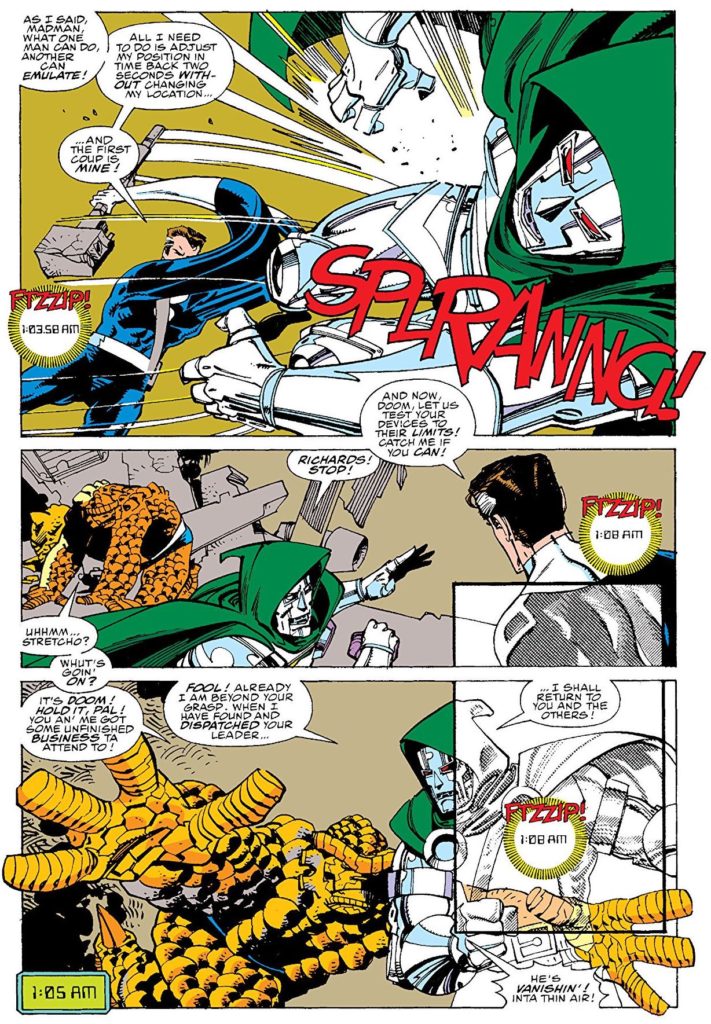 0:40:40-0:54:57: The clash between Doom and the FF continues in Fantastic Four #352 — we’ll get to #351 eventually, it’s a fill-in — and the formal play of the time-traveling issue manages to win us over for a while, even if I remain hung up on the portrayal of certain characters. But formalist play in such a heavy dose? No wonder Jeff says that it’s a “stunning issue” with complete reverence. Is this the first Simonson issue that passes the Lester test?!? 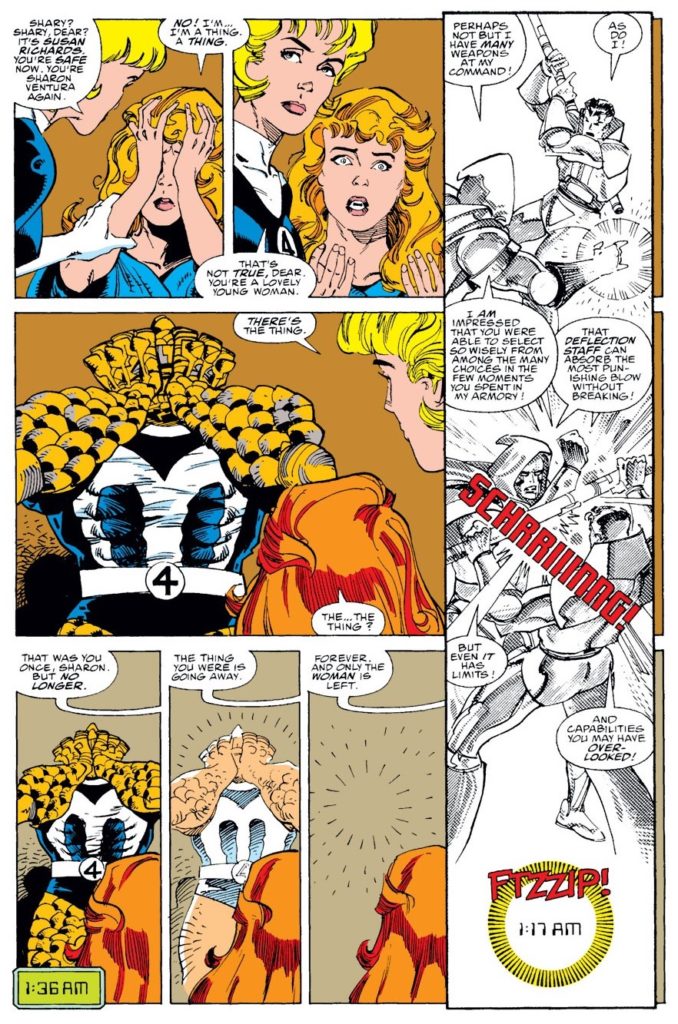 0:54:58-1:10:09: The discussion strays into an area of how I respond to these issues now, compared with when I first read them, and how strongly nostalgia plays into the appeal of them in general… which itself leads into a conversation about whether the Simonson run really counts as one of the top Fantastic Four eras, and if so, what that says about the series — and the concept — as a whole. (Spoilers: Not good things, really.) 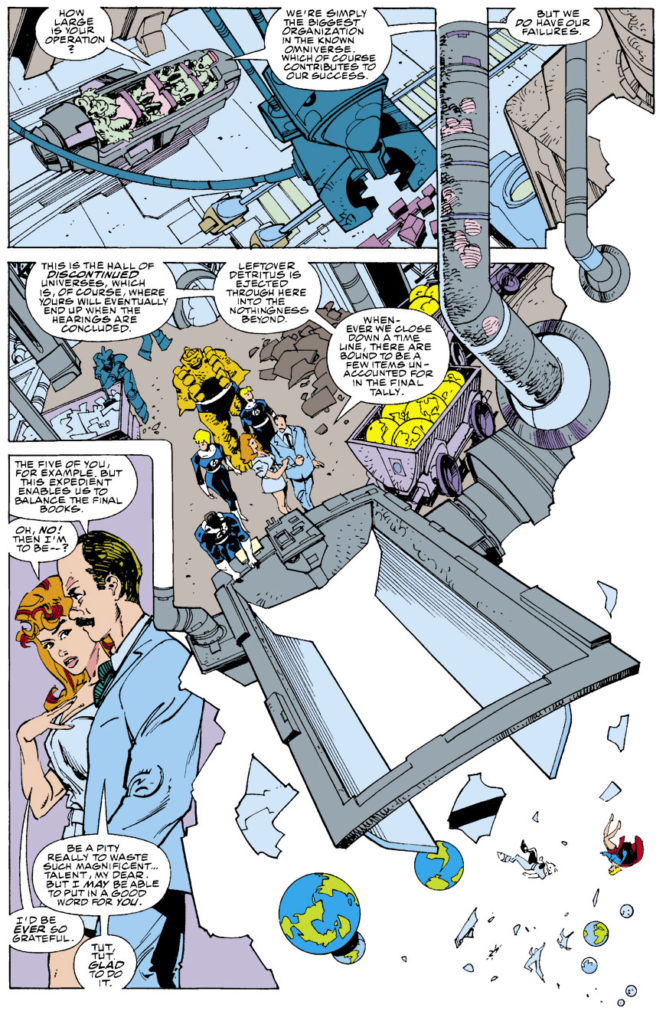 1:10:10-1:23:23: We get back on track by going through FF #353, in which Mark Gruenwald stands revealed as the villain behind the entire thing and Jeff and I struggle with whether or not formal playfulness and nice artwork can make up for shoddy writing, and consider whether or not this storyline was an inspiration for Alan Moore, of all people. But at least things end with a cliffhanger that isn’t even convincing for a second. It really does look great, though, especially the new new look Thing. 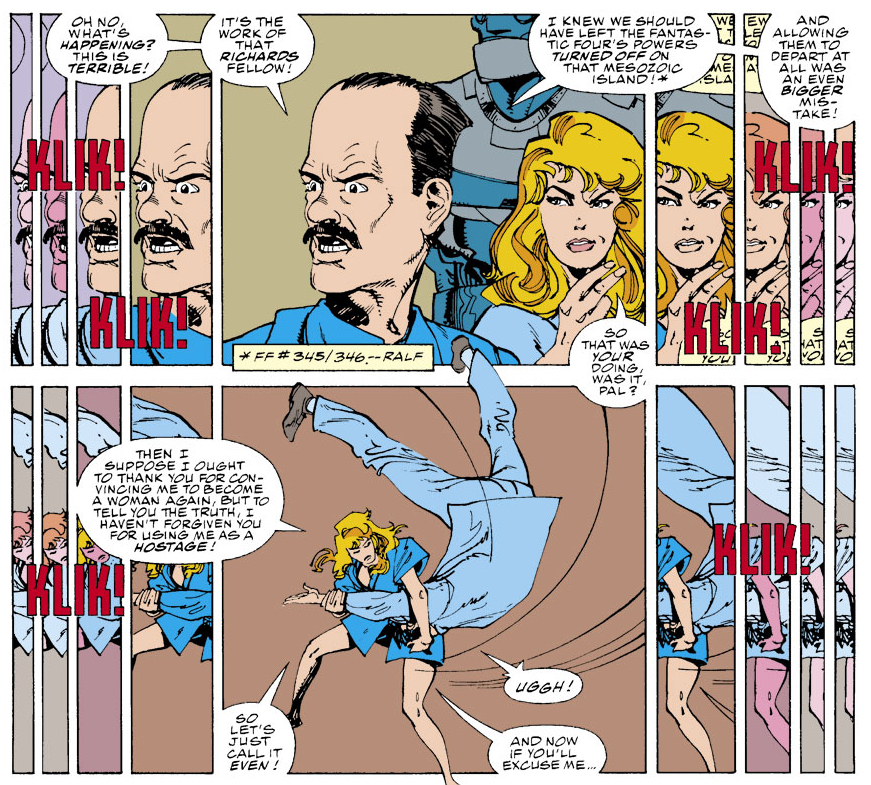 1:23:24-1:37:37: Fantastic Four #354 brings the end of the Walter Simonson era, and he goes out with a whimper that references Back to the Future Part III and has Jeff and I wondering if an alien is D.R., Quinch or Bug from Micronauts. Also, is there a not-so-hidden Excalibur reference in here, and what the hell is going on with the FF stripping down at the end of the issue? It’s… definitely an end to Simonson’s run, at least.

1:37:38-1:49:19: A brief look back at Simonson’s run brings up my (mistaken?) belief that these comics somehow predict Grant Morrison’s JLA a handful of years later, and we compare the two, with Jeff unpicking my thought process and coming up with better reasons for it to make sense — as much as it makes sense — and ways in which the comparison falls down. We also, very briefly, touch on whether Simonson’s Fantastic Four has made us want to (re-)read his Thor any more or less. 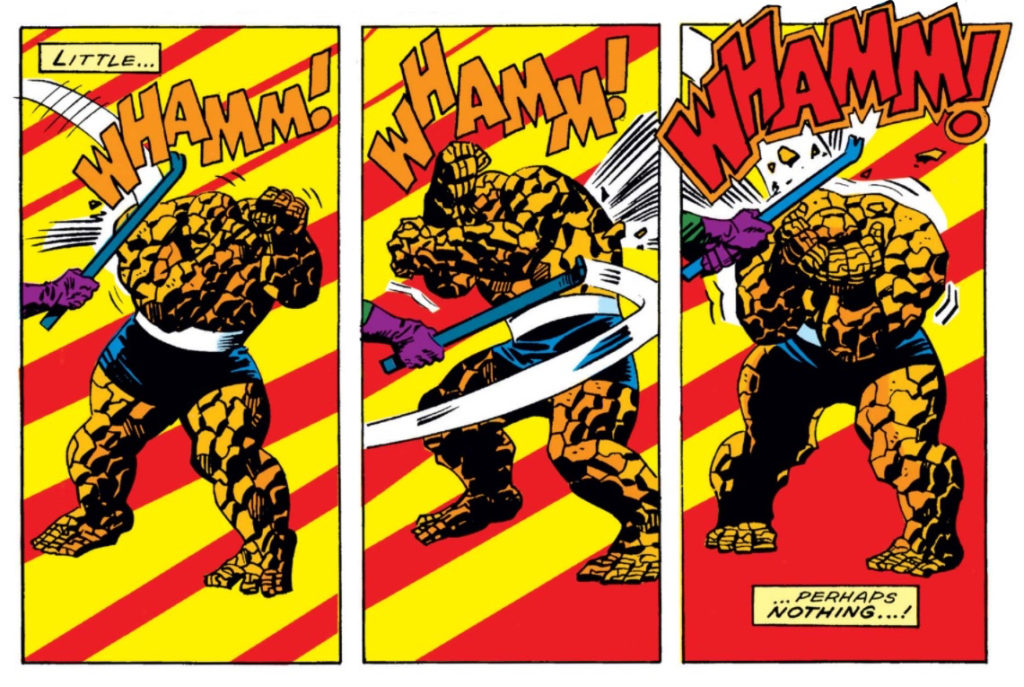 1:49:20-2:03:09: After exhausting ourselves on almost two hours’ worth of conversation about four comics — I don’t even think we talked about Lee and Kirby issues to this length — we gloss over Fantastic Four #s 351 and 355, both fill-in issues and both lacking even by the standards of what’s surrounding them, although Jeff and I surprised ourselves with a newfound appreciation of the artwork of Al Milgrom in #355, accompanying a story that is genuinely incredible, and not in a good way. 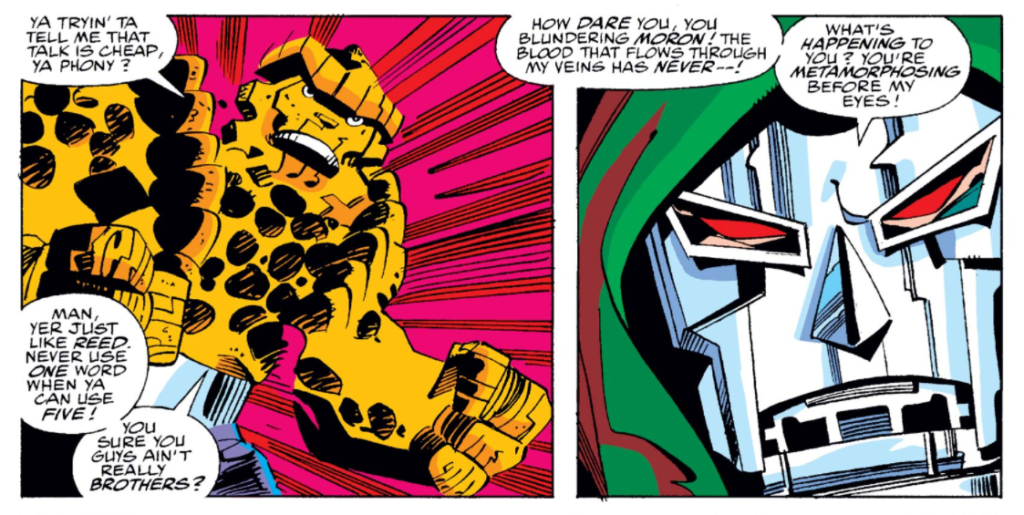 2:03:10-end: We wrap things up by announcing what we’re reading next — Fantastic Four Annual #s 19, 22-24 — and reminding everyone about the Twitter, Tumblr and Patreon of it all. As always, thank you for listening, and as with the last few episodes, we’re sorry we didn’t like Simonson as much as either of us wanted. (Although, judging by Jeff’s “I told you so”s this episode, maybe Jeff’s not that sorry…)

7 comments on “Baxter Building Ep. 40: “Let’s Hope Nobody Sees Us Arriving Home Like This!””