Previously on Baxter Building: As the result of Reed Richards’/Marvel editorial’s inability to leave well enough alone (Delete as applicable), Mr. Fantastic and the Invisible Woman have rejoined the Fantastic Four, just in time for the Thing to turn back into Ben Grimm, and the team to be defeated by the Frightful Four and… an evil Watcher…?!? 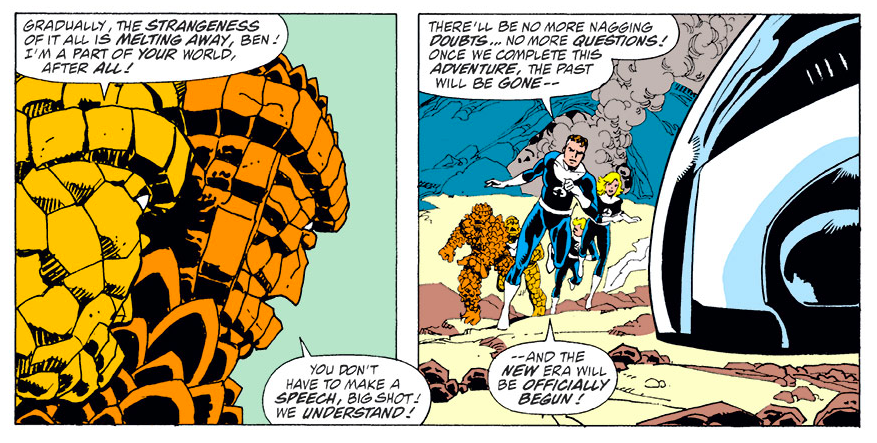 0:00:00-0:04:58: We start with the briefest of introductions, mentioning the issues that we’re talking about this episode (Fantastic Four #328 through 333, AKA the final Steve Englehart issues), and discussing potential Englehart-inspired pseudonyms for Jeff. You know, as you do. 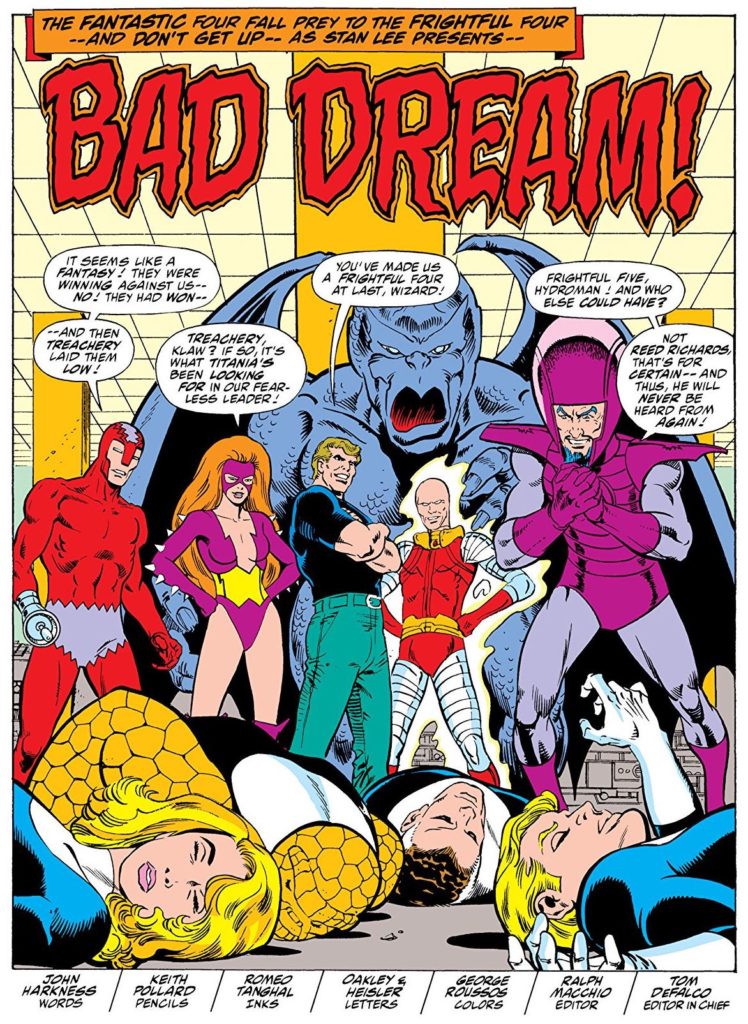 0:04:59-0:22:14: While Jeff appreciates what he describes as the final Englehart Fantastic Four issue that “counts”, I’m less impressed with FF #328, for many reasons including sub-par writing from Steve E, and particularly ill-suited inks from Romeo Tanghal, although Jeff’s notion of an eyebrows pass makes things seem a little better. It is, as I put it, a “shoddy issue,” but at least there are odd color choices, an unexpected Sensational She-Hulk in-joke, inexplicable hideout hi-jinks and the two of us talking about the benefits of Meta-Englehart versus Regular Englehart. 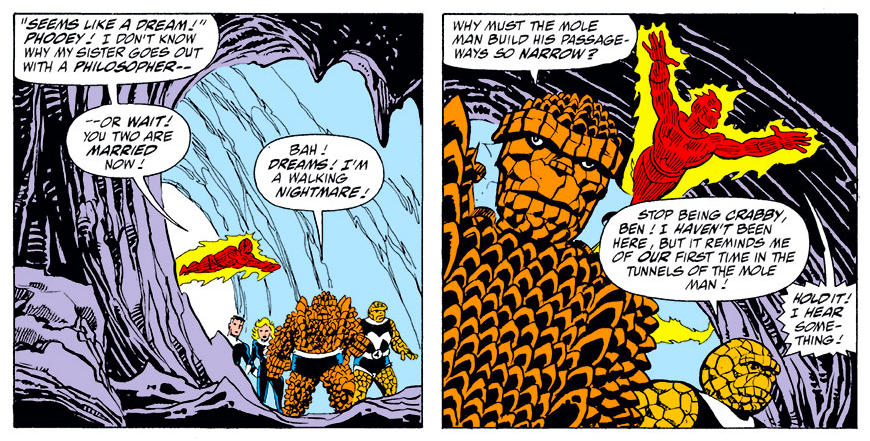 0:22:15-0:38:58: “Well, let’s move on to #329,” I say, with a tone of resignation that the issue really doesn’t deserve. Welcome to the new Fantastic Four, who are kind of the old Fantastic Four, only far creepier, as the opening pages of the issue reveal. (They really are enjoyably creepy, really. Discover our joy in the word “Bah!” Listen to the fake FF ruin our chance for lasting peace with the Mole Man! Endure us talking about the ways in which the fake Fantastic Four were ahead of their time, and feel like the Ghost of Comics Yet To Come! We also discuss the lack of clarity in dream sequences, which… might be the point, upon reflection…? Then again, I’m not sure there was that much coherency happening at this point of the book… 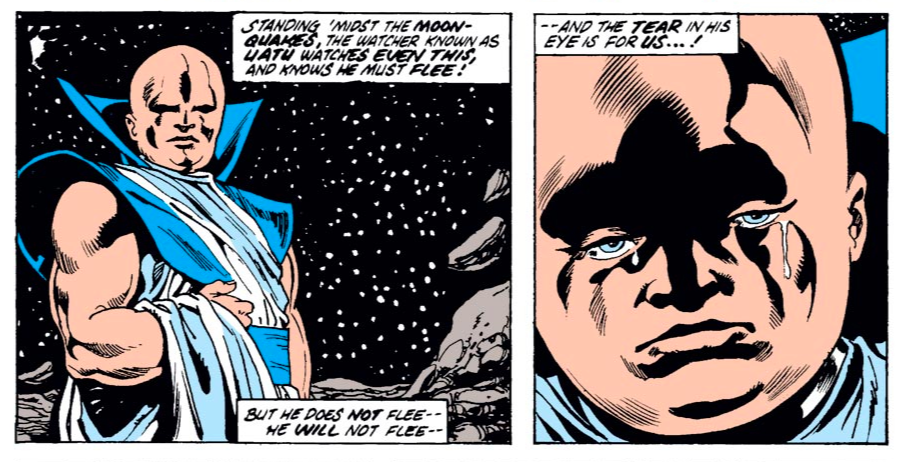 0:38:59-0:57:34: What can we say about Fantastic Four #330? Well, it offers up Sue’s dream, which inexplicably doesn’t feature Sue but does feature Doctor Doom vs. Doctor Doom and the destruction of Earth. (Really, do other people have dreams in which they never appear, and it’s just me?) A general apathy in this issue is compounded by bad coloring (or, perhaps, coloring mistakes), and a sense that the best hope for this issue is wondering if it’s a parody, or meta-commentary on crossover events and crossover logic in general. Plus! It’s the return of Rich Buckler, and oh, man, has he brought some swipes! Is this even more meta-commentary on the nature of recycling in superhero comics, or just an unfortunate coincidence? U decide!

0:57:35-1:06:42: Sure, there’ve been some misfires so far this episode, but FF #331 offers up Reed’s dream, which has the best reveal in comics as the Turino XL’s foreshadowing from a handful of issues back is finally explained. We get an entirely solid issue of super heroics that is likely to make you wish that Steve Englehart stayed on the book for longer, and talk about Englehart sharing Reed’s apparent belief in the FF as a team. Meanwhile, Englehart’s captions ramp up the sarcasm and his war on Marvel editorial, deliciously. 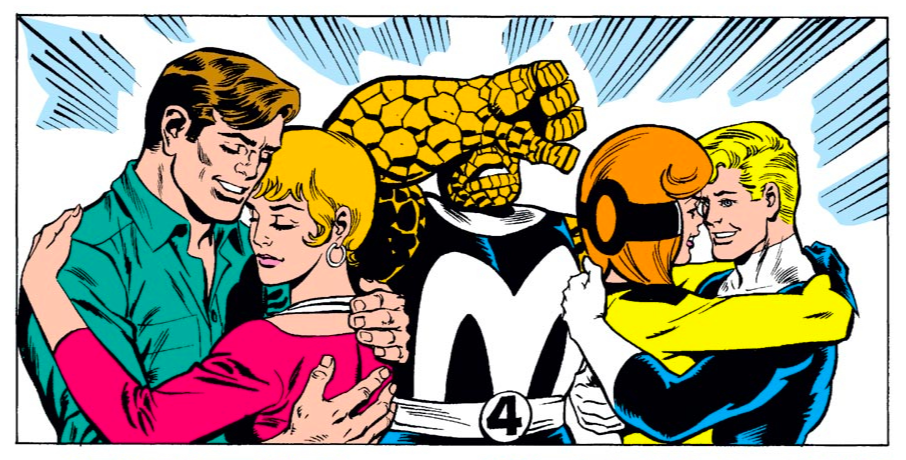 1:06:43-1:20:53: What’s that, you say? You want to see some old-fashioned catfighting? Uh… okay…? Thankfully, Fantastic Four #332 has you covered. The issue opens with what may be comics’ greatest passive aggressive opening captions, but before too long, we get to see Crystal return to fight with Sue Storm, argue with Reed, and set up a genuinely wonderful retcon of one of John Byrne’s biggest upsets to the status quo… But, of course, it’s all a dream! (Sadly.) Meanwhile, Englehart works in more meta-commentary about what the Fantastic Four, and arguably Marvel, needs to be successful, but is he preaching to the readers or the editors? (Spoilers: Probably the latter, considering the context.) And what is it that’s more important to Johnny Storm: Love or ego? Jeff and I disagree on the answer! 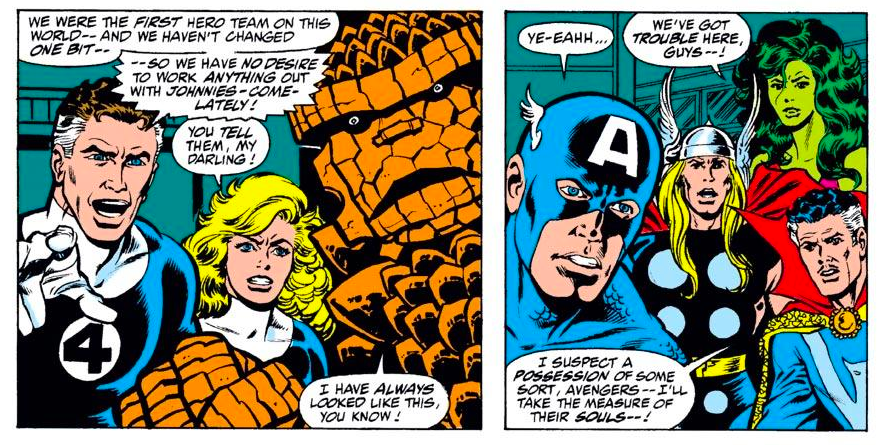 1:20:54-1:42:17: Perhaps the greatest unanswered question about FF #333 is why it’s called “The Dream Is Dead, Part Two,” considering we couldn’t find a “The Dream Is Dead, Part One” anywhere. (Really, does anyone know where that appeared?) But in an issue where Hercules provides two perfect lines of dialogue, Rich Buckler swipes the latter Buscema/Palmer Avengers run for one panel only, and the massive, storyline-wrap-up fight is really a half-assed discussion about the need for people to change and grow, should we really care about titles? Of course not! After all, there’s Marvel editorial’s passive aggressive push-back against Steve Englehart’s passive aggressiveness to talk about, and boy, howdy. They didn’t disappoint. 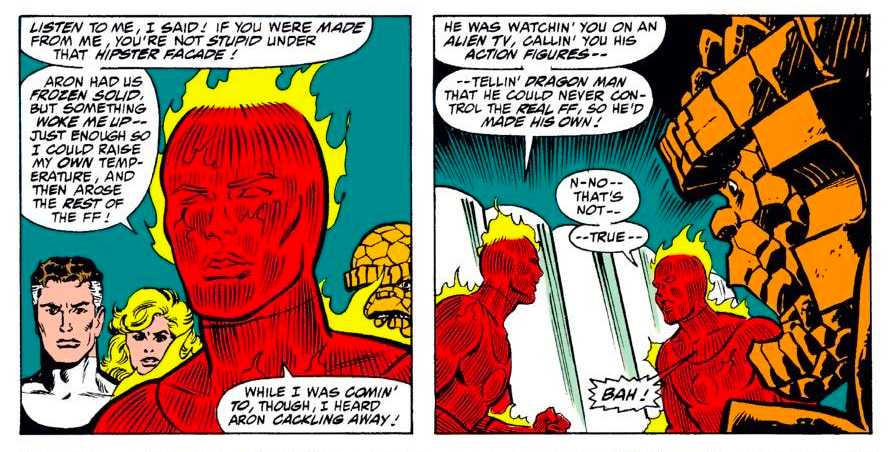 1:42:18-end: The strangeness, and strange greatness, of the Englehart run as a whole is briefly memorialized as we wrap things up, before declaring the first couple of Walter Simonson arcs in the next episode — Fantastic Four #334-341, if you’re reading along at home — before the regular reminder that we can be found on Twitter, Tumblr and Patreon. As always, thanks for listening and reading. Next time, less bad dreams, but way, way more lame villains and time travel.