Previously on Baxter Building: It’s an all-new beginning once more, as the Steve Englehart era is behind us, and the Fantastic Four — really, five, because Ben Grimm is still part of the team despite being de-powered — is ready for some old-school adventures freed of the meta-textual war between writer and editorial that has marked the last year or so of the series. Can incoming creator Walt Simonson right a ship that’s been enjoyable, if somewhat listing, for quite some time…? 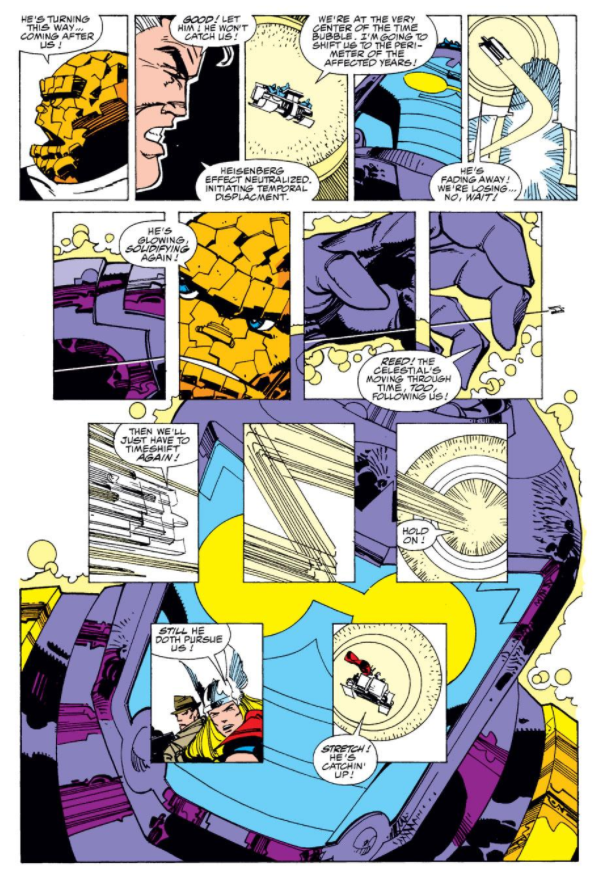 0:00:00-0:06:29: In a surprise move, we open our first episode of the Simonson era by examining Jeff’s relationship with Simonson’s work, and the fact that — gasp — he’s not really a fan! Well, it’s more complicated than that; he loves the artwork, but doesn’t love the writing. Get your disbelief out the way now, because he might end up converting you by episode’s end. 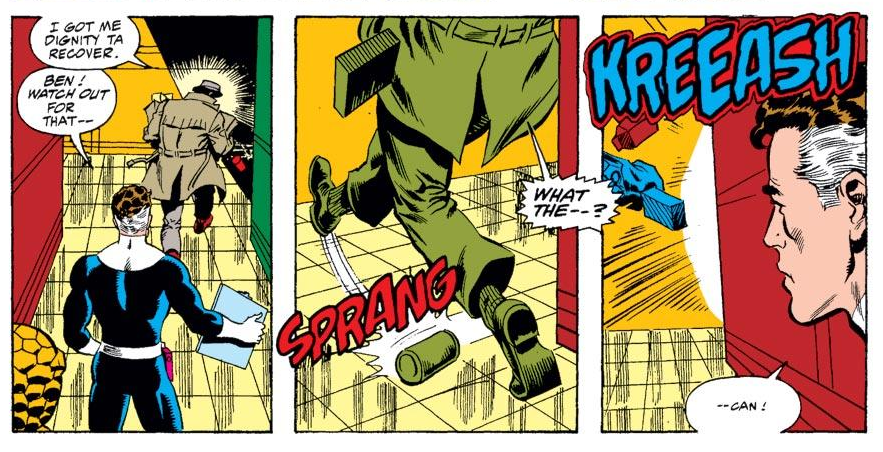 0:06:30-0:39:29: Instead of going issue-by-issue, we somehow fall into an en-masse discussion of Fantastic Four #334-336, which Jeff keeps calling the “Dark Congress” issues. (We’re unusually bad with issue titles this episode, so I’ll put them here: #334 is “Shadows of Alarm,” #335 is “Death by Debate,” and #336 is, indeed, “Dark Congress!”) I think the issues, drawn by Walt Simonson with art by Rich Buckler and Ron Lim, are “enjoyable in a way that the book hasn’t been in years,” and are gentle — if not particularly funny — comedy, but Jeff doesn’t agree in the slightest, because he sees a more sinister motive behind making fun of silly villains. We talk Mark Gruenwald, Steve Gerber, John Byrne, and then slip very much into talking about the next few issues early, in trying to talk about why these issues disappointed Jeff so much. The short version? Simonson’s writing really needs Simonson’s artwork in order to fully function. 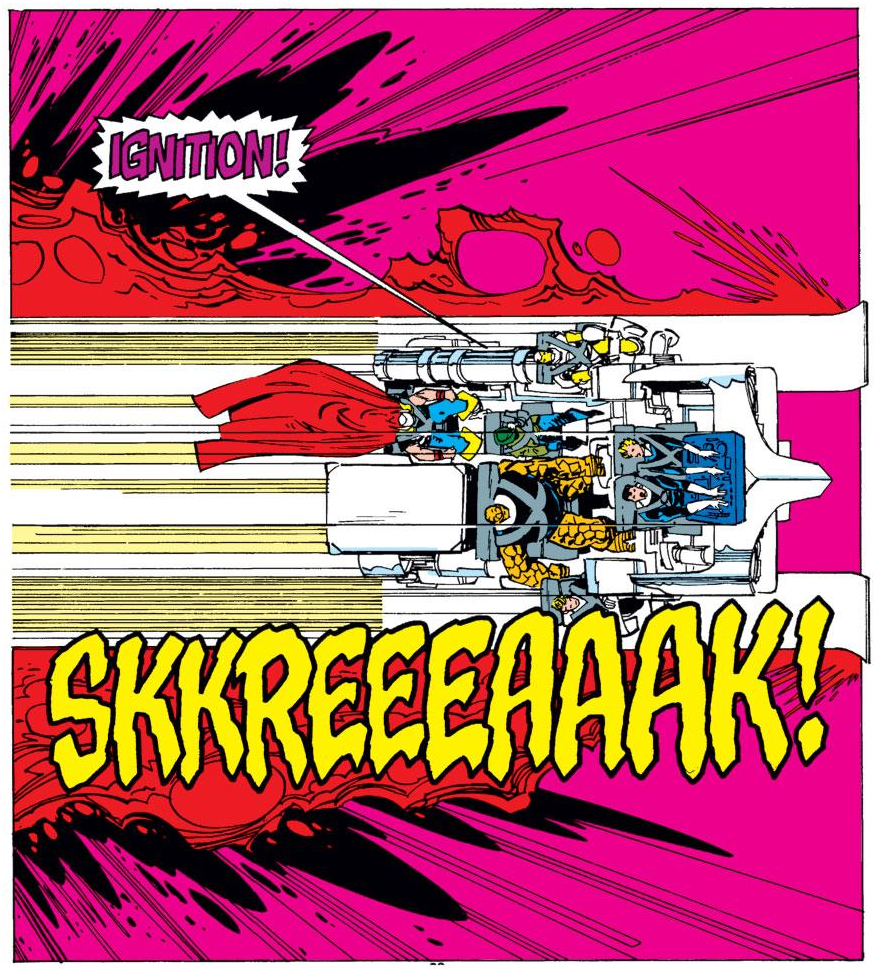 0:39:30-0:53:31: “Once you get to the double page spread on pages 2 and 3, the scope of the book is bigger,” I enthuse as we get to the All-Simonson Fantastic Four #337, although we go back and forth about whether the writing lives up to the artwork here. (Spoiler: It doesn’t, but we’ll get to the reasons why soon enough.) Jeff can’t help but see the specter of John Byrne in these pages, although I think it’s more a shared devotion to the same source Lee/Kirby material. That said, one of Jeff’s reasons for the Byrne comparison is worth its weight in rhetorical gold all by itself. 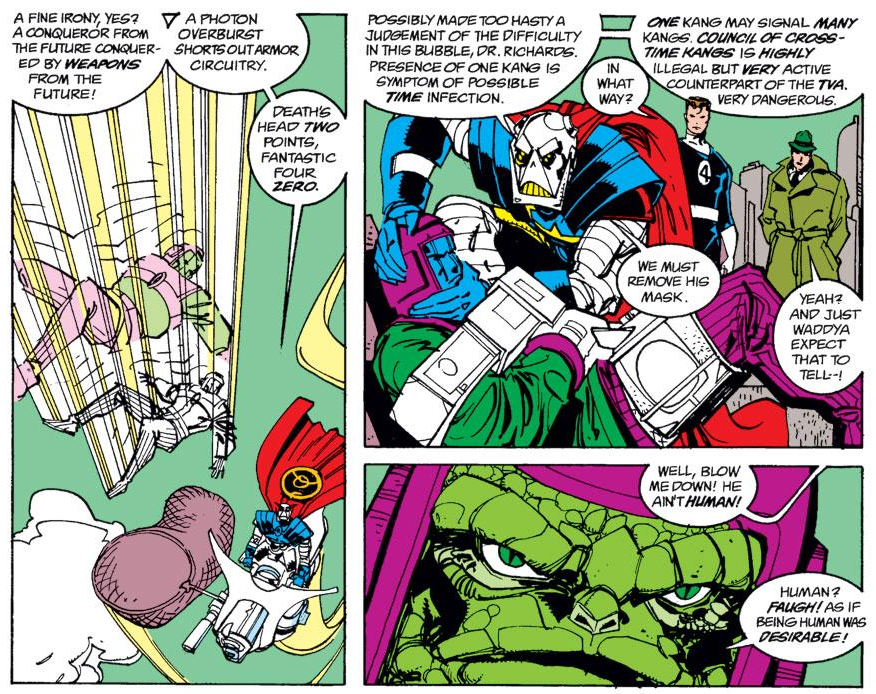 0:53:32-1:08:51: Discussion on FF #338 opens with the idea of Simonson’s art taking the book back to its sci-fi roots, before Jeff brings up a point of continuity that I hadn’t even considered (or remembered, for that matter), and we talk about the way in which the Fantastic Four comic has somehow stopped being about the Fantastic Four, somehow. What is the central idea behind the Fantastic Four, and how much does the team called the Fantastic Four have to be part of it…? All this, and Jeff’s dislike for Death’s Head, an unnecessary Kieron Gillen slam — those two things aren’t unrelated — and our shared enjoyment for Simonson’s language, if not necessarily his plotting. 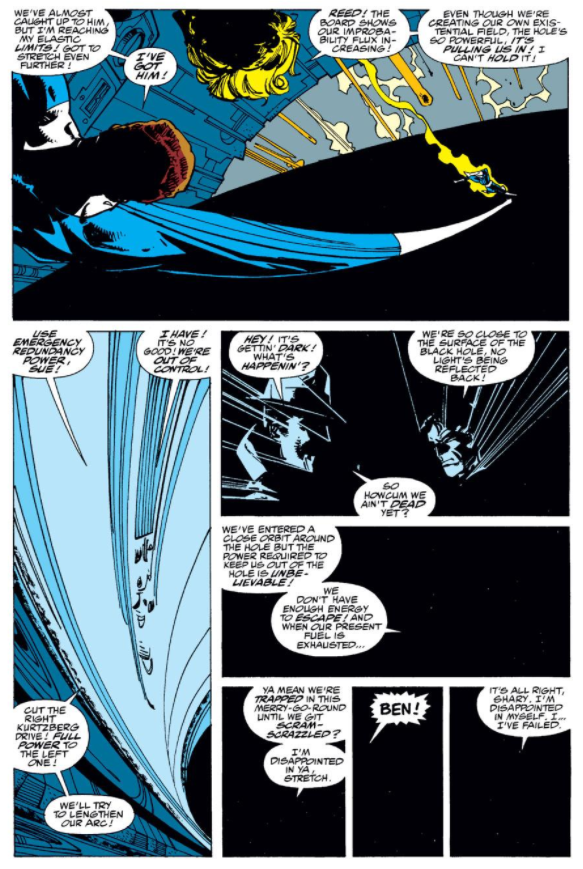 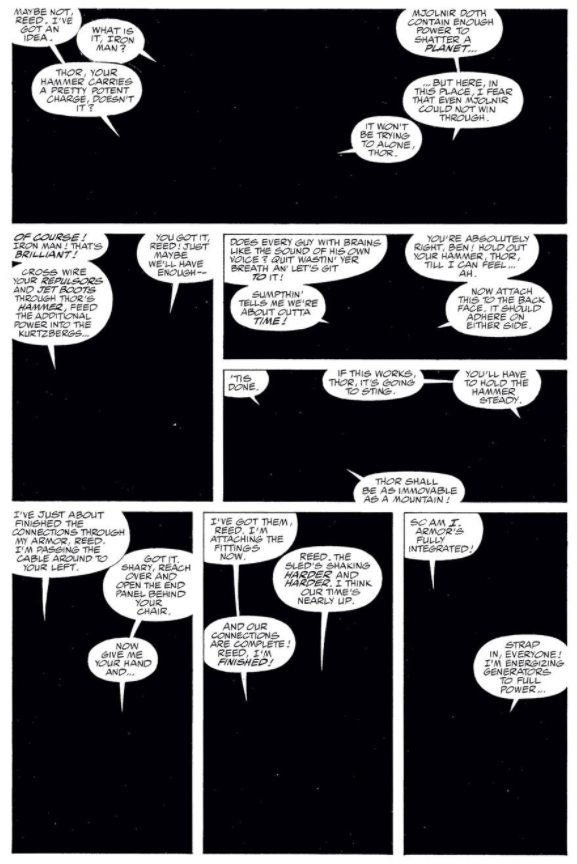 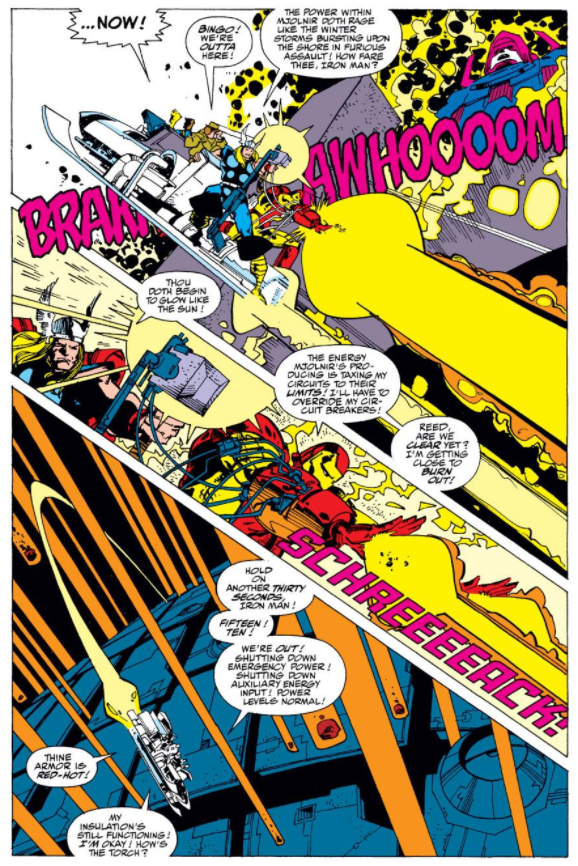 …Really. How amazing is that? (Especially knowing that the final page is a page turn from the all-black panel page.) Meanwhile, I arguably give Simonson far too much credit for giving the readers credit, before complaining that the plot for this issue comes out of nowhere and seems like a waste of time. Jeff describes it as “weirdly half-assed,” and honestly, he’s not wrong. We puzzle through the plan being enacted in this issue as we explain the plot, and it’s not as if we come to any kind of conclusion.

1:26:43-1:40:47: FF #340 opens with me riffing on where Simonson’s head is at as a writer, and what that means for the storyline going on right now. Jeff isn’t happy with this issue’s plot, and tries to argue that this is the biggest waste of time in the entire storyline because of yet another side quest that adds little to the overall story. I’m not convinced, because (a) monsters, (b) Reed’s suicide run, which leads is prompted by some clearly false jeopardy (Not one reader of the comic at this point seriously believes Sue is going to die), but does result in some amazing art, which once again gets dissected. Is this the most we’ve ever talked about the art in a Baxter Building? Possibly, or at least since the Kirby days. Perhaps that’s a clue as to where the strength of these stories lies… 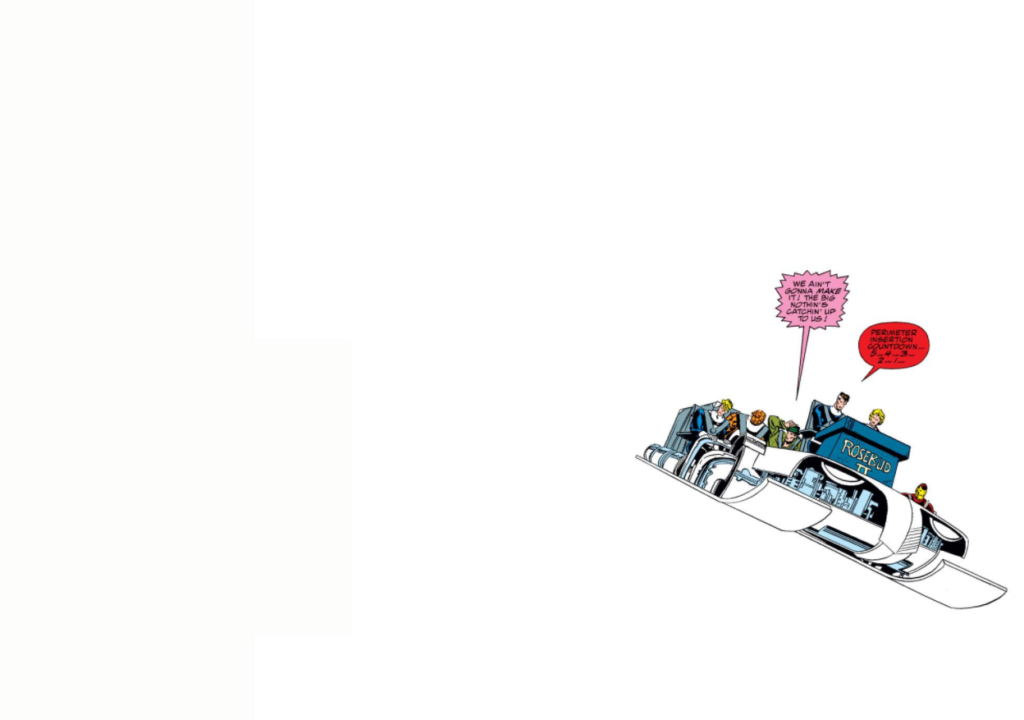 1:40:48-1:56:27: Does the opening narration of Fantastic Four #341 suggest that even those responsible think that the last issue was filler? Maybe, but this issue really tries to make up for it by packing in a whole bunch of plot in an attempt to wrap everything up and destroy all of reality in the process. Well, if you’re going to go out on a story like this, I guess you’re going out with a bang — and we try to live up to what’s going on with some singing, some art appreciation, and wondering why the surprise reveal that sets up the conclusion works the way it does. (Even though Jeff calls it a cheat; I’m not sure that’s entirely fair, but Simonson is certainly playing with reader expectation in a way that both works and disappoints.)

1:56:28-end: We speed towards the end of the episode with a little piece of continuity minutiae — the villain of this entire arc wasn’t actually who she appeared to be, thanks to an after-the-fact retcon — and then a reminder that you can find us all over the internet, especially at our Twitter, Tumblr and Patreon accounts. Next time around: I hopefully won’t be sick so we won’t have to wait a week to record the next episode, and we’ll be going through Fantastic Four #342-349. As always, thank you for listening and reading along.