Previously on Baxter Building: I could make reference to just how bad the Tom DeFalco/Paul Ryan run has become by this point — trust me, both Jeff and I will do so many times in the episode ahead — but what everyone really needs to know for the issues ahead are: Franklin Richards was kidnapped into the future by his grandfather Nathan, only to be returned as a telepathic teenager with high-tech armor and a mysterious mission. He’s been followed by someone called Hunter, who is like Neil Gaiman and Todd McFarlane’s Angela if she were even less interesting, but she has a mission that’s involved here teaming up with Devos, Paibok the Power-Skrull and Klaw, who are like a new Frightful Four with no clear agenda other than screwing with the Fantastic Four. As it turns out, though, they’re out of luck — because Doctor Doom’s just apparently killed Reed Richards in a last-minute suicide move! 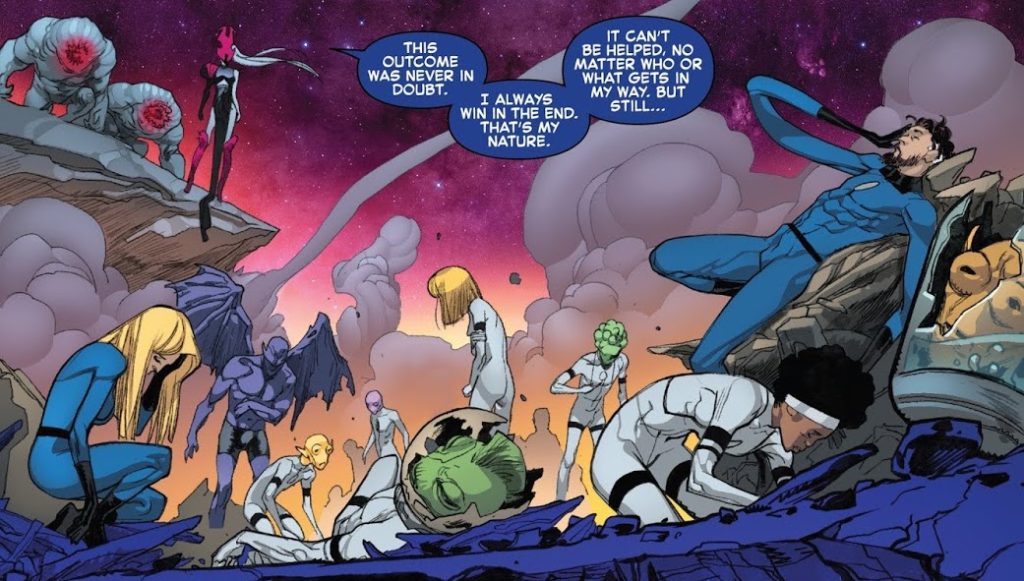 0:00:00-0:26:31: What I genuinely believed would be a shorter episode than usual gets immediately derailed when Jeff asks if I’d read Fantastic Four #2 — the current series — and what I thought of it, leading into a discussion about the first two issues of the series, Dan Slott’s strengths as a writer, and what Jeff doesn’t like about Brian Michael Bendis’ Superman. Staying on target as ever.

0:26:32-0:42:01: That conversation leads into our talking about the era of FF that we’re now covering, and how (poorly) it stands up compared with the versions of the book that existed when we first encountered it, and the flaws that the DeFalco/Ryan era has. Or, as I put it somewhat unkindly, “It’s progressively getting a worse and worse comic, and by worse, I mean boring.” (I’m not actually wrong, though.) 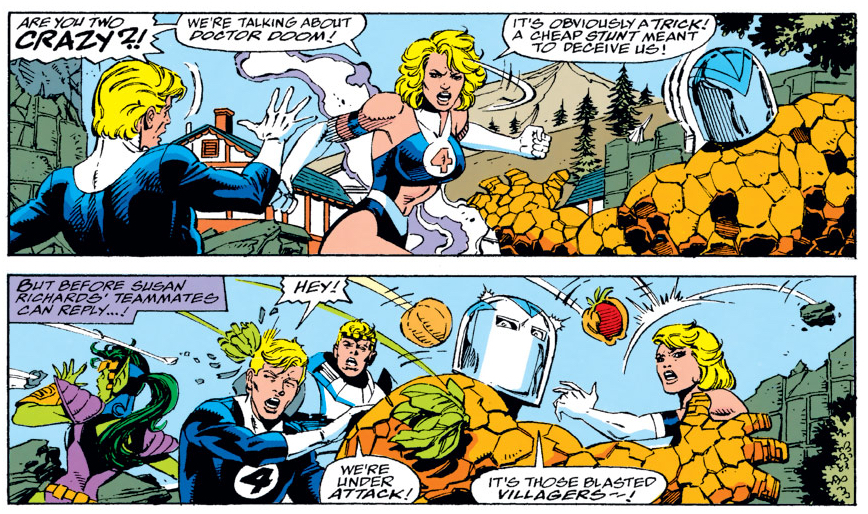 0:42:02-0:55:26: We finally get to the point of the podcast and talk about Fantastic Four #382, only to pretty quickly regret it, and the many questions it raises: What’s the point of killing off one of your central characters if you immediately move on from the topic? Why is technology modular for easy updating in Castle Doomstadt? Is the Franklin/Huntara material intentionally obtuse? And why should we be bothered about a cliffhanger quite so underwhelming as this one? 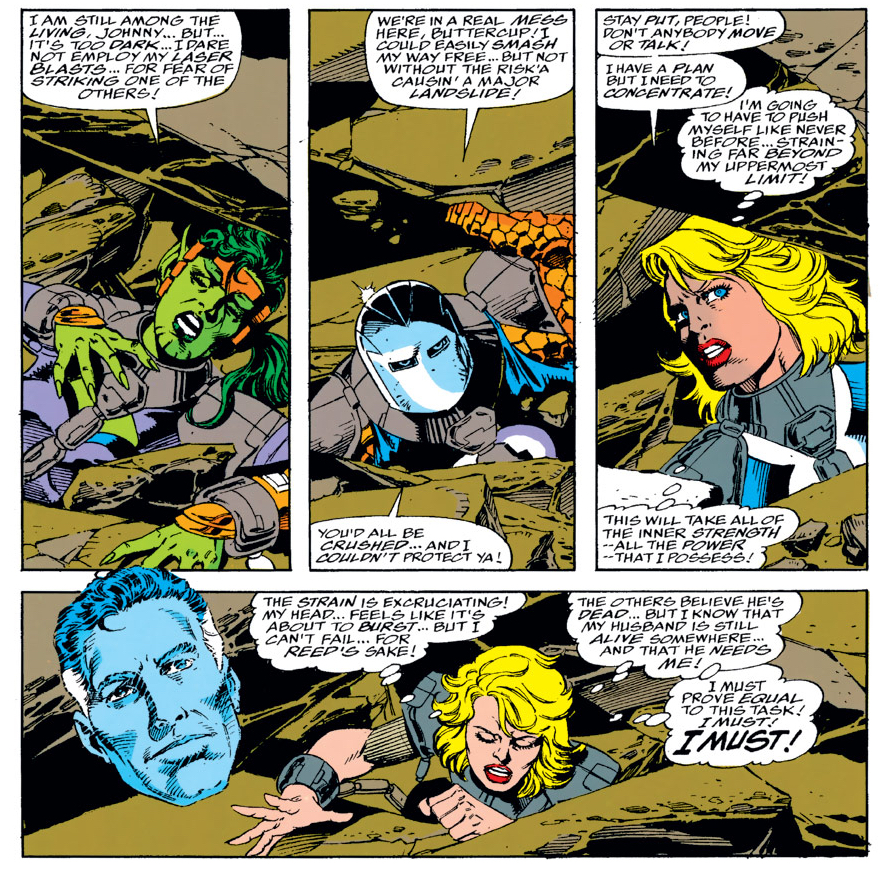 0:55:27-1:18:10: Ignoring the nonsense title, FF #383 brings an unexpected conclusion to the plot line about Sue’s powers failing, a wonderful moment of concern from Jeff about other aliens jailed by the Skrulls and some particularly unlikely strategy working out when it comes to following random people running away from trouble. It also provokes us to attempt to make sense of the mythology that’s been built up around Franklin and Huntara, and to say that it’s complicated and not exactly coherent is certainly a polite way of putting it. Could it be possible that… this wasn’t exactly the most well-planned comic? Surely not.

1:18:11-1:23:40: We speed through Fantastic Four #384, which technically has a couple of big reveals in it — Sue really was being corrupted by Malice, which is maybe an alien perhaps possibly — except that they are utterly undercut by poor execution and a creative team that seems categorically unable to actually offer a definitive conclusion to anything. Still, at least Scott Lang has showed up to be the team’s new science guy, which is… maybe something…? 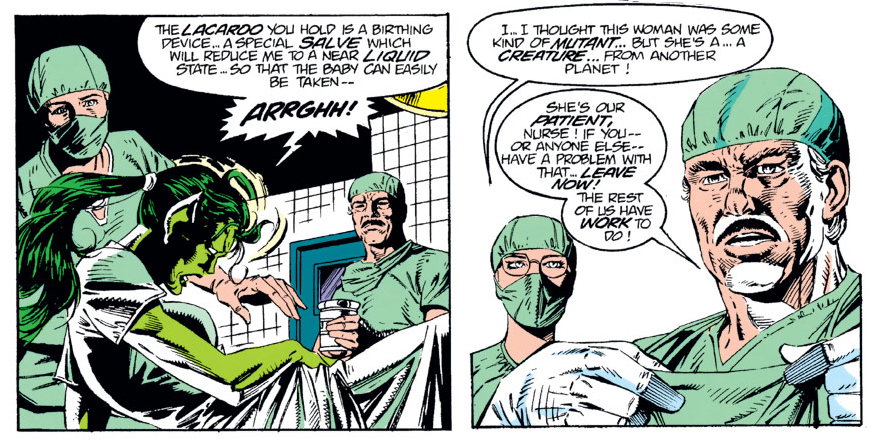 1:23:41-1:52:24: Both FF #s 385 and 386 interrupt the ongoing storylines with a crossover called Starblast, which — judging from these issues — is all about things happening underwater, but looks are apparently deceiving. As we try to get through the issues as quickly as possible — for #385, at least — there are some things that stand out… not least of which is Lyja the Lazerfist finally giving birth to her and Johnny’s child after issues and issues of teasing, which also means an answer to what a Lacaroo is. Don’t worry; it’s exactly as underwhelming as you think it is, if not moreso. Meanwhile, why is everyone creeping on Sue? Her husband died just a few issues ago!

1:52:25-2:19:37: Even the appearance of the Watcher fails to entertain us in Fantastic Four #387. Indeed, Jeff seems to have problems with his appearance altogether, perhaps because of his long-standing suspicion of bald men in togas. While “Nobody Gets Out Alive!” is, in many ways, a set-up issue for what’s to come, there’s a bunch to chew through here, not least of which are Murphy Brown allusions, the gullibility of our heroes, Namor’s desire to get naked and the inherent creepiness of Paul Ryan’s attempts to make Sue Richards sexy. Oh, and a cliffhanger even more underwhelming than that of #382. 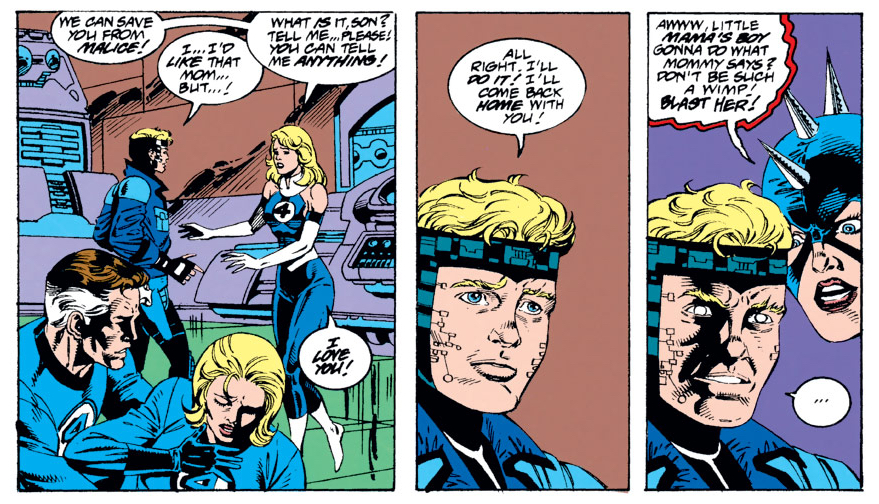 2:19:38-2:31:41: There’s no way to get around it; FF #388 is a mess amongst a run of messes, and manages to make the team look both stupid and also uncaring. It’s also the most curiously, the most retro issue in a run that has been astonishingly retro to date, with appearances from the original Avengers and the early Fantastic Four, and a villain who’s stolen his entire look from a previous FF villain without anyone commenting on it, strangely. There’s certainly some kind of aesthetic at play, even if it’s an inexplicable one. 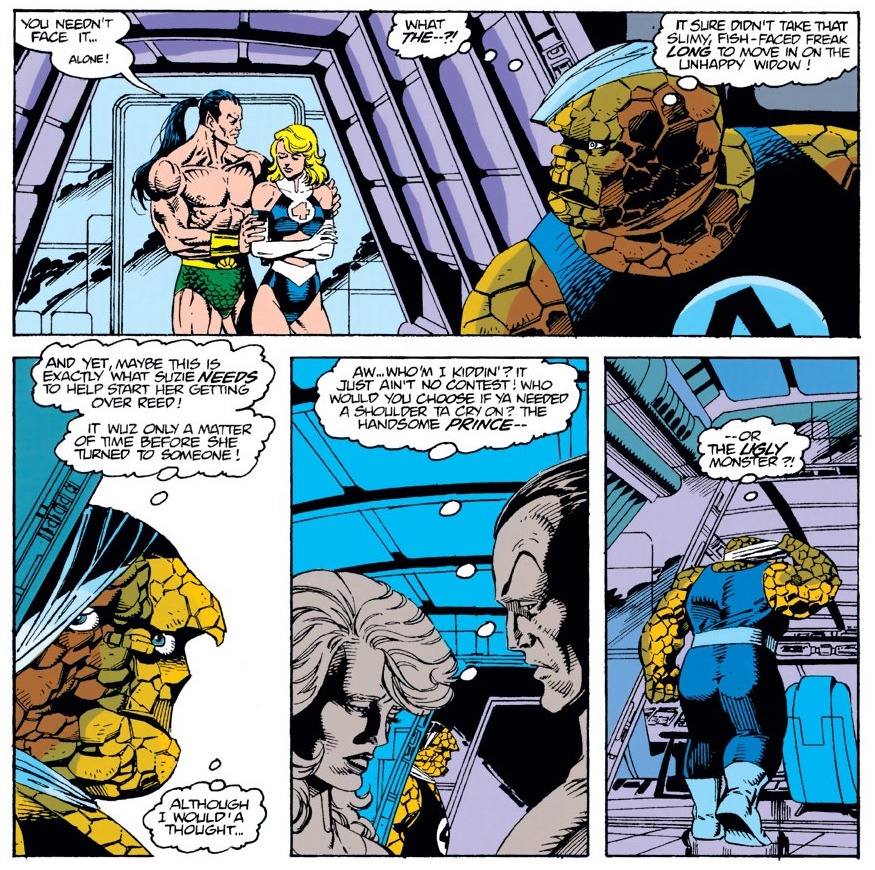 2:32:42-end: We finish by being once again very unkind about what we’ve just read — “These issues are so devoid of inspiration or fun or anything good,” I say, apparently particularly unimpressed — and looking ahead to what we’re covering next month, which is to say, Fantastic Four #389-396. Disaster is awaiting, and not just in the sense of this comic continuing to go downhill! While you wait for the episode, why not check out our Tumblr, Instagram, Twitter or Patreon? You can collect the set, or something similar…!