Previously on Baxter Building: The beginning of the Tom DeFalco/Paul Ryan run took Jeff and I by surprise by being… not absolutely terrible…? By far the most traditional* take on the team in quite some time, it also wasn’t afraid to shake up the status quo, which it managed by revealing that Johnny’s wife was — gasp — a stinkin’ Skrull, and then she was killed. Oh, and we had shitty Venom, too. No, not regular Venom, who is shitty; an alternate version of Venom who may have actually been shittier, somehow. 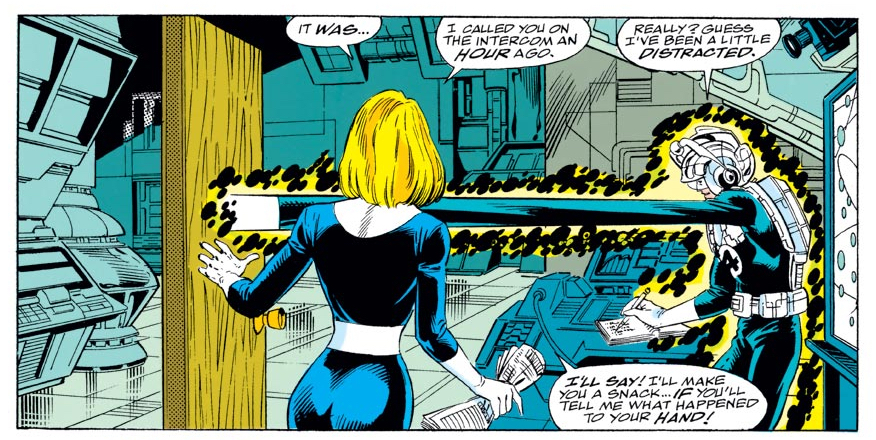 0:00:00-0:06:48: As we open — with a tease about what the post-Baxter Building world will look like — we discover that Jeff is mad at me for making him read these issues. Which, you know; fair. Somehow, we also skip ahead to talking about the second storyline we cover in the episode when we ask: Was Tom DeFalco just giving the audience what they want, and in a smarter way than it appears at first glance? (Surely I’m not the only one surprised by how much DeFalco is getting a relative pass in this episode…?) 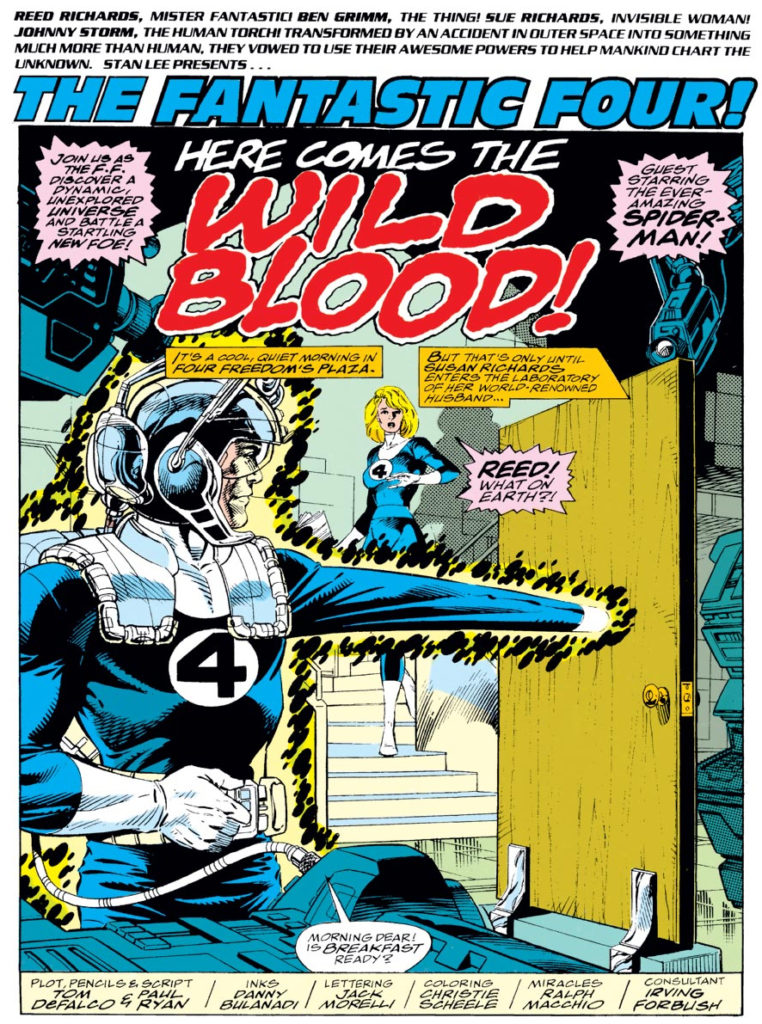 0:06:49-0:21:40: Despite looking as if we’re about to talk about Fantastic Four #362, we get distracted and talk about one of the reasons why these issues don’t work as well as they should, especially considering our enjoyment of the first DeFalco/Ryan issues last time. The answer…? Perhaps it’s artist Paul Ryan, who gets compared to both Silver Age DC and Don Heck, but not in particularly flattering ways on either occasion. Also discussed: The importance of Joe Sinnott, and the shifting landscape of what a Fantastic Four comic “should” look like. 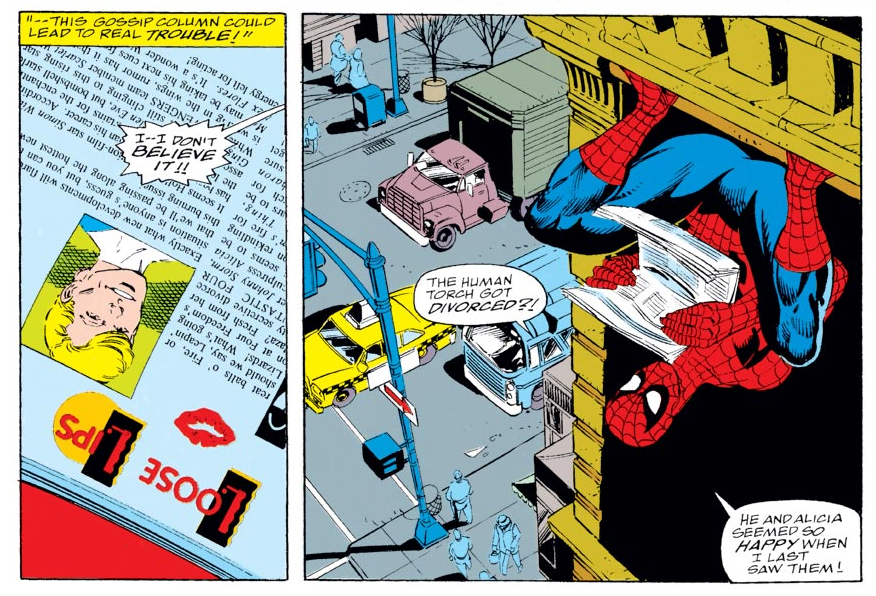 0:21:41-0:44:42: By the time we get to talking about FF #362, we’re ready to talk about the important stuff: How underwhelming a wooden door can be, interns going above and beyond when it comes to inserting text into a panel, the horror of the Spider-Taint, how science works in the Marvel Universe — spoilers, it involves hot dogs and a curious lack of planning — and just how DeFalco and Ryan recreate the magic of those early Fantastic Four issues by reviving the days when the writer apparently didn’t particularly care to follow what the art was clearly showing if it made one of the heroes look bad. It’s the classic formula from the House of Ideas! 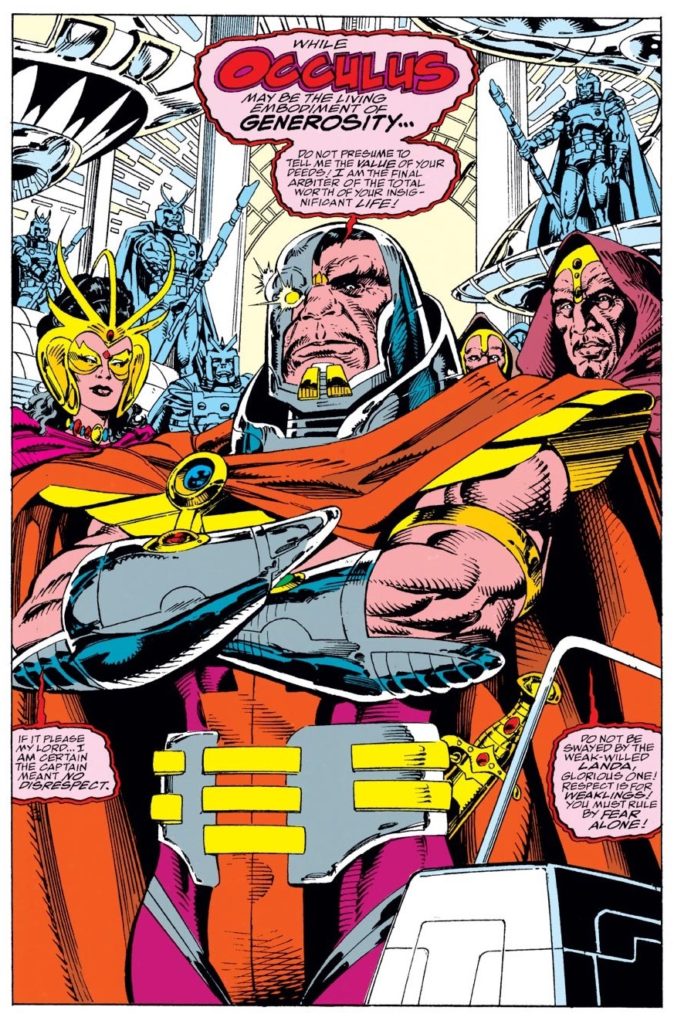 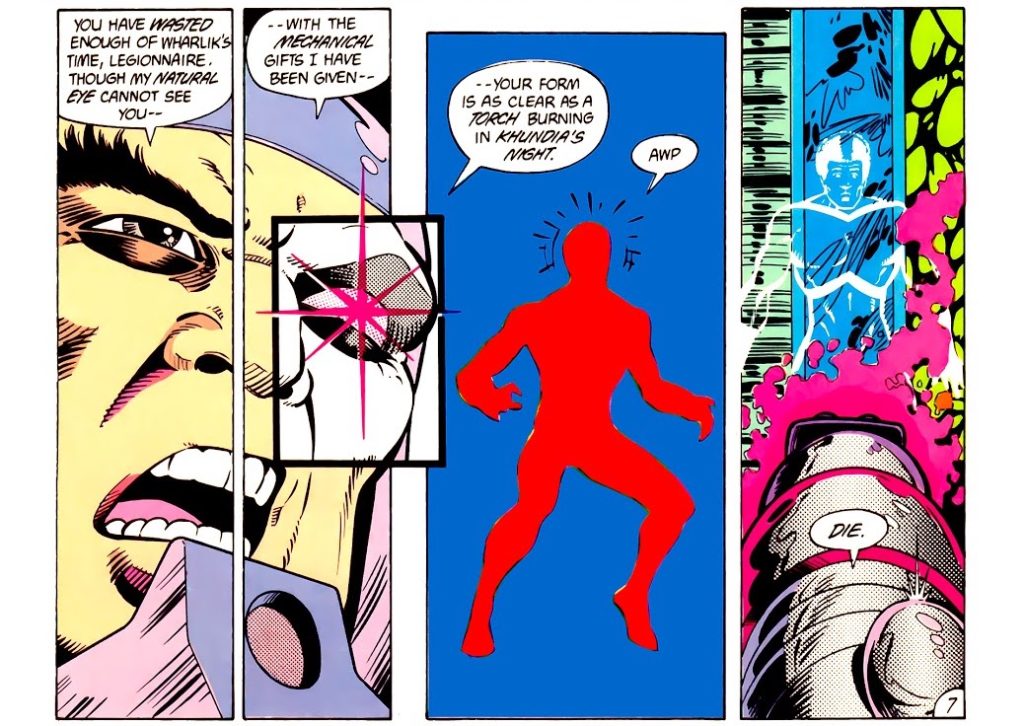 Here’s Occulus in a Legion of Super-Heroes issue from 1985. Or, wait. Is it a Khund? Who can tell.

0:44:42-1:00:44: If you’ve ever thought to yourself, I wish a Marvel comic would rip off the design of the Khunds from DC’s Legion of Super-Heroes, and then apply it to a character that Jeff and Graeme would call Fucking Dull Darkseid, then, good news! Fantastic Four #363 is definitely the comic for you! But that’s not the only joy — or, perhaps, “uh, joy?” — to be found in this issue. There’s also the FF’s new vests! The complete lack of awareness that DeFalco and Ryan had accidentally created an alien world based on video games! Jeff’s somewhat disturbing suggestion that, maybe, Reed Richards deserves a dead son. (Although the fake-out of Franklin maybe being dead is really, really unconvincing.) And, best of all, the worst example of Chekhov’s Gun ever seen. 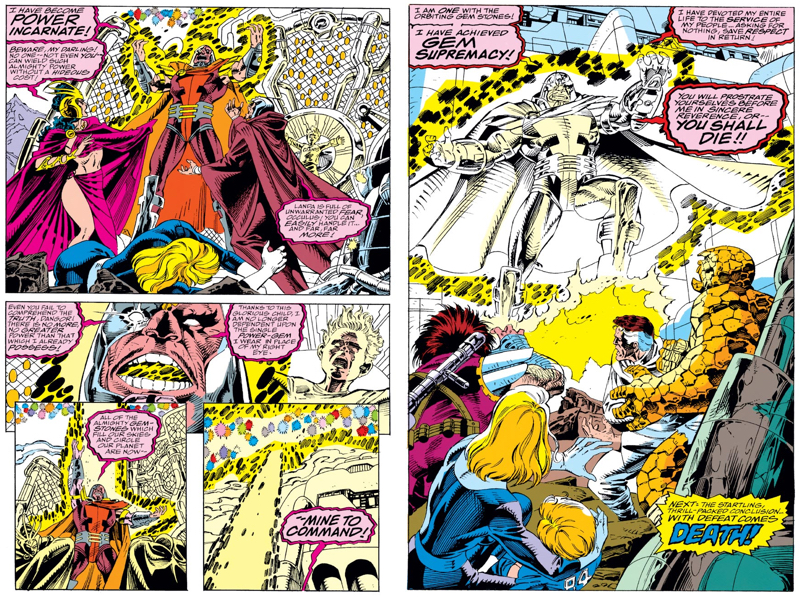 On the left, the second page of #364. On the right, the last page. Has… anything changed…?

1:00:45-1:08:44: Perhaps you can tell how disinterested both of us were in FF #364 by the fact that we get through it in just eight minutes, and most of that is spent complaining that it basically repeats the same cliffhanger as the previous issue. Sure, part of it is that I skip over the origin story of the planet — really, nobody cares, not even Tom DeFalco and Paul Ryan — but, really: Eight minutes is roughly six more than this issue deserved, and most of the extra is taken up by complaining that Franklin isn’t even in peril this time around.

1:08:45-1:25:10: Even ignoring the fact that the title of Fantastic Four #365 is an outright lie (Really; if your comic is called “With Defeat Comes Death,” it’s only polite to kill someone off), it’s safe to say that the denouement of this storyline isn’t something that we’re enamored with, thanks to Reed Richards’ inability to tell his wife the plan despite having countless opportunities to, a lack of impressive fight sequences and a general air of everything being almost impressively underwhelming. Is this the new norm in terms of quality for the book going forward, or — as Jeff puts it — Paul Ryan simply not having the chops to pull off the fantasy epic that he’d likely been dreaming of since high school, while Tom DeFalco simply didn’t care enough to try hard? We also briefly compare these past four issues to what lies in wait, because we’re definitely on different sides of a divide over the quality of these two stories. (Or, more honestly, which one of two bad stories that we personally find more palatable.) 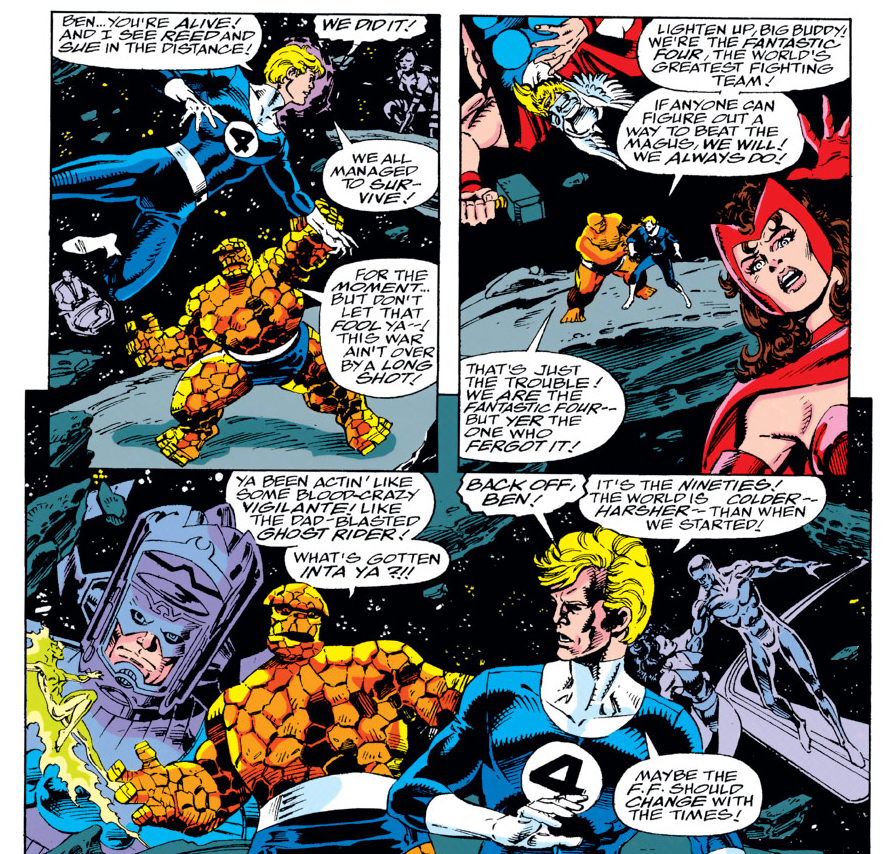 1:25:11-1:53:15: We end up handling all of Fantastic Four #s 366-370 in one messy bundle, in part because of my distaste for the five-part Infinity War crossover and in part because they’re essentially a collection of somewhat repetitive cut scenes from Jim Starlin’s comic as opposed to something that necessarily would’ve held up to an issue-by-issue synopsis. (In a surprise move, Jeff is less than impressed by Infinity War, which he read because he was inspired by these issues.) While I find the issues incomplete and, in one case, somewhat offensive, Jeff has a good couple of arguments in his favor as he talks about what works about them, whether it’s the metatext that Tom DeFalco is bringing to proceedings, or the Jungian aspect under exploration. “I’m saying, these issues… get a pass because I was interested,” Jeff argues at one point, saying at another, “It’s semi-sort-of organic.” He’s wrong on that last point, but I can’t stay mad at him when he also takes a moment to point out the wonderful sexual innuendo in dialogue that I entirely missed the first time around.

1:53:16-end: As we round towards the end of the show, Jeff brings up sales figures, I get the date of the beginning of Marvel’s sales collapse wrong, and we look ahead to what issues we’re reading next. (#371-381, for those following along at home.) If you’re looking to kill time between now and then, may I recommend our Twitter, Tumblr, Instagram and Patreon? As always, thank you for listening and reading along with these show notes, and feel unafraid to leave comments below.