Previously on Baxter Building: The John Byrne era is over, with the writer/artist who, let’s be honest, left his stamp on the series more than anyone else aside from Lee and Kirby, departing after five years mid-storyline. In his place, we got a couple of fill-in issues leading up to what should be a big deal: two big anniversary issues within six months of each other. Will they live up to the occasion? Spoilers: No.

0:00:00-0:05:34: A punchy opening — for some reason, Jeff and I talked for an hour and a half before recording, don’t ask me why — leads us into introducing the issues we’re covering this episode: Fantastic Four #296-303. Or, as Jeff puts it, the issues in which “a whole bunch of people [are] trying to wrestle with where Byrne was steering the work, and trying to make it work, and frankly just not being able to fucking do so.” On the plus side: these issues are also kind of terrible. Wait, did I say plus side…? 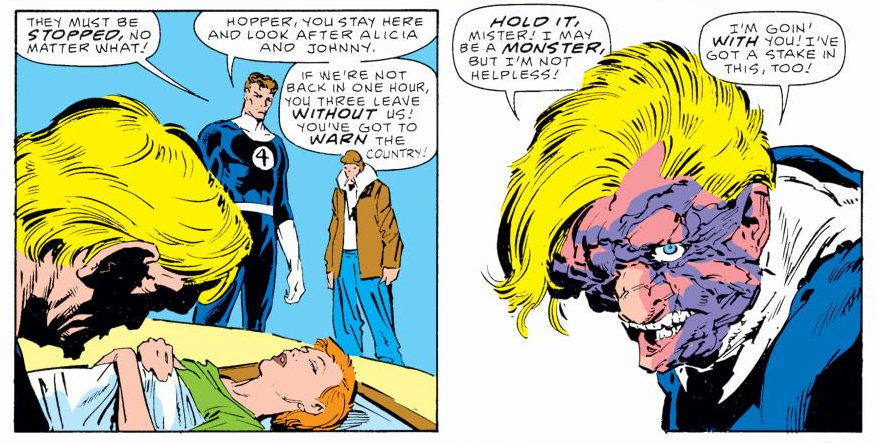 0:05:35-0:30:57: We open with the 25th anniversary issue of the series, Fantastic Four #296, which is handled with all the sensitivity and appropriateness it deserves — which is to say, almost none. Jeff and I talk about Jim Shooter’s plotting skills, whether or not Stan Lee is Reed Richards (and, if so, who does that make Sue?), John Byrne’s original plot for the issue before he was fired, and the perils of jam issues when so many artists are involved in general. All this, plus the secret origins of Frank Miller’s Sin City art style, too!

0:30:58-0:41:58: FF #297 introduces a short-lived new regular creative team of Roger Stern, John Buscema and Sal Buscema, and somehow, the combination is far less than the sum of its parts. Still, we do get to talk about the production schedule of the book, the bad advice of Reed Richards, the subtext of the issue’s villains — well, as Jeff reads it, anyway — and Roger Stern’s abandoned plan for Benjamin J. Grimm. 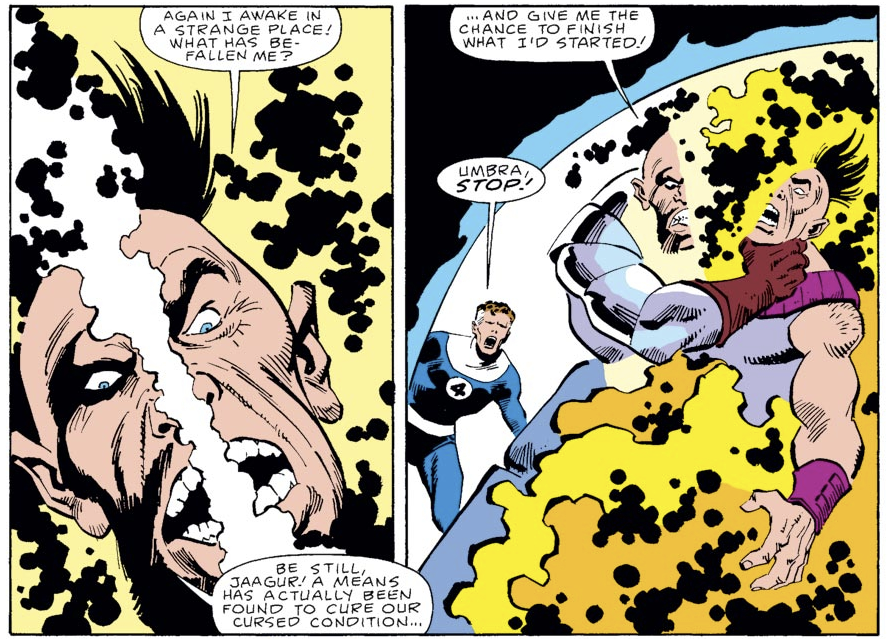 0:41:59-0:47:37: In the immortal words of Mr. Jefferson P. Lester, Fantastic Four #298 is “also dull as fuck.” He’s not wrong; the conclusion of the two-parter begun in the previous issue, the highlight is probably the sight of a villain trying to choke himself to death. (See above.) We end up talking about the fact that the series can’t allow Ben Grimm to evolve emotionally any more, and the possible reasons for that beyond a misguided attempt to make the book “grittier,” because the late 1980s weren’t a kind time for those unimpressed by anti-heroes.

0:47:38-0:54:51: You know who the hero of FF #299 is? She-Hulk. You know who’s about to entirely disappear from the series without explanation? I’ll give you a clue: She’s seven-feet tell and bright green. As a swan song, this is kind of a good issue and offers what could be closure for Grumpy Ben Grimm™ if he was allowed to have closure. Meanwhile, the rest of the Fantastic Four continue to be the worst, She-Hulk and Wyatt Wingfoot explain the downside of the First Family’s closeness and you will really wish Jeff was writing the ongoing adventures of 1986’s Johnny Storm.

0:54:52-1:01:39: There are a few things that Jeff and I really enjoy about Fantastic Four #300 — Doctor Doom’s response to Johnny and Alicia’s wedding, for one thing, as well as the Yancy Street Gang’s method of therapy and the fact that even the Puppet Master isn’t a complete dick, not to mention the single greatest Franklin Richards drawing ever — but for those looking forward to the kind of anniversary bonanza that celebrates the history of the comic and makes you feel excited for what lies ahead… yeah. Maybe not. Still, at least John Buscema has the chance to draw random nobodies as wedding guests. 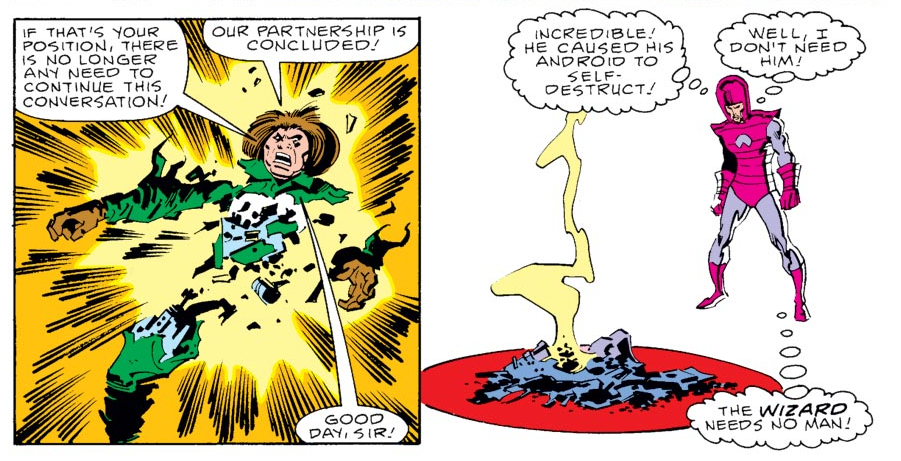 1:01:40-1:09:27: Say what you like about FF #301, but you can’t deny that the Mad Thinker knows how to exit a conversation. (He’s also not a kid killer, so there’s that.) After Jeff comes up with the best description of Tom DeFalco and Paul Ryan’s upcoming Fantastic Four run — “Dad Squared” — we talk about the drawbacks of the Wizard’s plan and discuss even more evidence that Johnny Storm might actually be even more “the worst” than Reed Richards. What in the world is happening?!?

1:09:28-1:31:15: The final issue of Roger Stern’s run — although Fantastic Four #302, like the last issue, is only plotted by Stern and scripted by Tom DeFalco — brings discussion of Johnny Storm’s new catchphrase and name, as well as the dumbest plot to avoid nuclear apocalypse ever, and Reed and Franklin’s awkward father/son talk. Also, Jeff gets into a fugue state about Alicia’s desires and I make a pun so bad that it temporarily stops Mr. Lester in his tracks. Success!

1:31:16-1:41:00: Limping towards the finish line, FF #303 brings Roy Thomas back, but it’s Thundra’s return that gets Jeff Lester excited. The same can’t be said about the Thing, who’s continuing to dominate the series just months after returning, with Thomas offering up even more potential closure for the character that manages to contradict everything that the series had been claiming to this point. But this is perhaps better, so… yay… ish…? 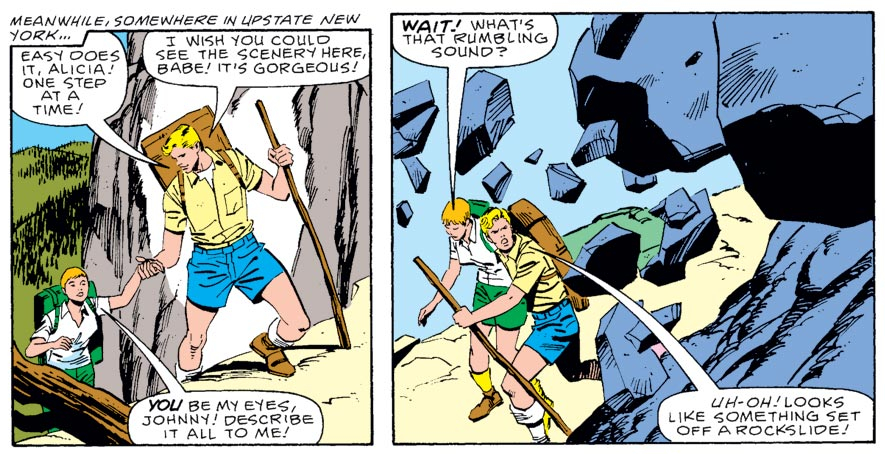 1:41:01-end: Exhausted by bad comics, we talk about whether or not the high number of shitty Fantastic Four comics means that the Fantastic Four is a shitty concept, and end up in a food analogy that just made me hungry while editing the episode. Are there three sides to a successful FF story, and will we remember to use this metric on future runs? The answer to one of those questions is no. As everything gets wrapped up, we lay out the next batch of issues we’re going to cover — FF #s 304-313 — and remind you to visit the Twitter, Tumblr and Patreon, as usual. As with every episode, thank you for listening and thank you for reading through these show notes. Next time, I promise, will be more fun. It’s Englehart time!

15 comments on “Baxter Building Ep. 33: “About The Only Thing Out of The Ordinary Around Here Is… Me!””