Previously on Baxter Building: When we last left off — in the same recording session! — the Thing has discovered an all-new reason to feel self-pity, Sue Richards has turned so almost-evil that it’s amazing that no-one seems to have brought in some psychics to check her out, and Johnny Storm has accidentally burned down an entire university. Reed Richards? Still boring, but I think we’d all expect that, let’s be honest. Spoilers: This won’t be the case by the end of the episode. 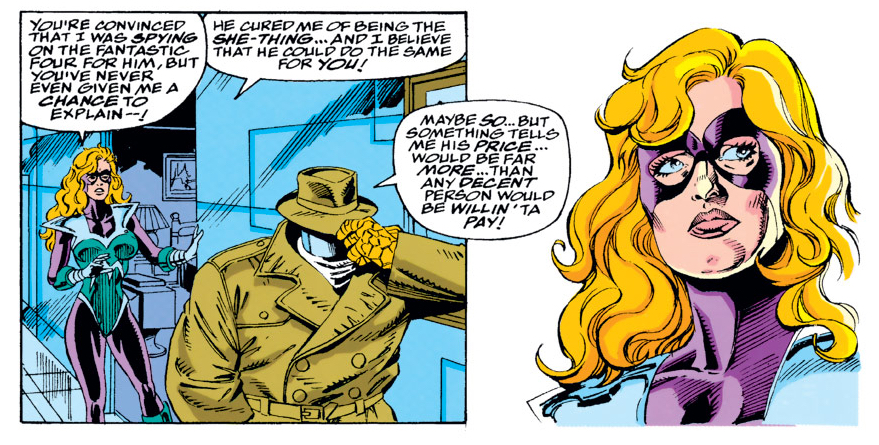 0:00:00-0:19:52: We go straight into Fantastic Four #376, which opens by stealing from the “seminal classic” Uncanny X-Men storyline “Days of Future Past,” and ends by stealing the it-depends-how-old-you-are potential classic backstory of Cable, because… Tom DeFalco was really into the X-Men at the time…? I have no idea. Also! Jeff comes up with the portmanteau “Nathable,” and I try and defend Franklin Richards for reasons that are genuinely inexplicable to me at time of writing, by calling him “a dick in training.” But class is almost over…! 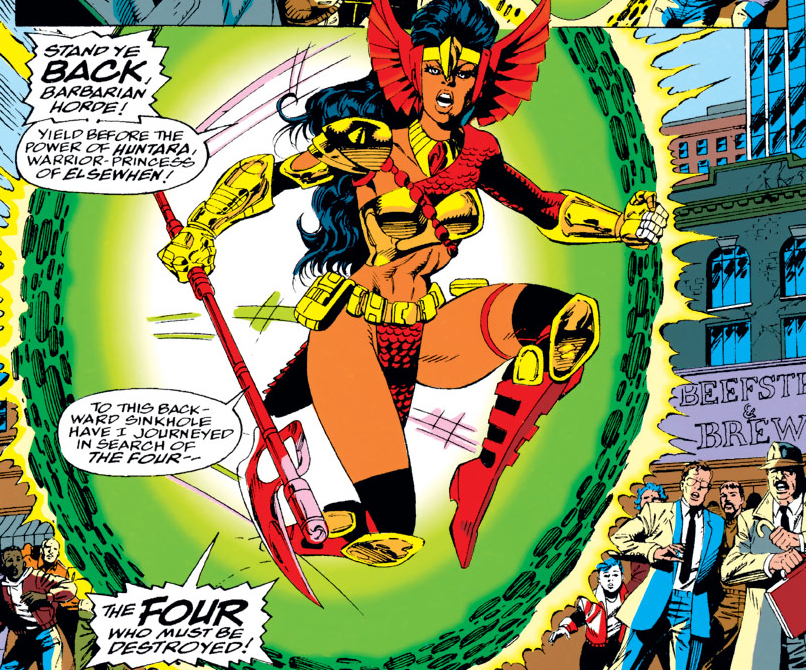 0:19:53-0:41:31: Is Reed Richards a bad scientist, or Tom DeFalco a bad writer? Fantastic Four #377 will have you ask that question, as well as others like this: Is Huntara a rip-off of Angela? Was Devos supposed to be an alternate Franklin Richards, or perhaps just the enemy of Franklin in the future he was raised in? Did Devos’ original design owe a little bit too much to the action movies that were coming out at the time? And most importantly of all, is Paul Ryan actually on a mission to make this comic book as boring as possible?

0:41:32-0:54:00: There are all manner of things that are unexpected about FF #378, not least of which is seeing the Thing complain that people don’t think of the group as “the world’s greatest fighting team” anymore. Apparently, that was a thing at some point…? But who can dwell on such matters when Johnny’s trial is interrupted by four of the lamest villains of all, and there’s an entire army of cameos including Spider-Man! Daredevil! The Avengers! Sandman but not the Neil Gaiman one but wouldn’t that be amazing! And, fine, sure, Silver Sable. Whatever.

0:54:01-1:01:30: Things aren’t going well for Sharon in Fantastic Four #379, which might come as a relief for Sue and Reed Richards, who are both currently sharing a plot line unintentionally. (This won’t last long, don’t worry.) Meanwhile, Doctor Doom is plotting in the background, and that’s not going to end well. (Note that we’re picking up the pace, as Jeff and I both begin to get appropriately exhausted.) 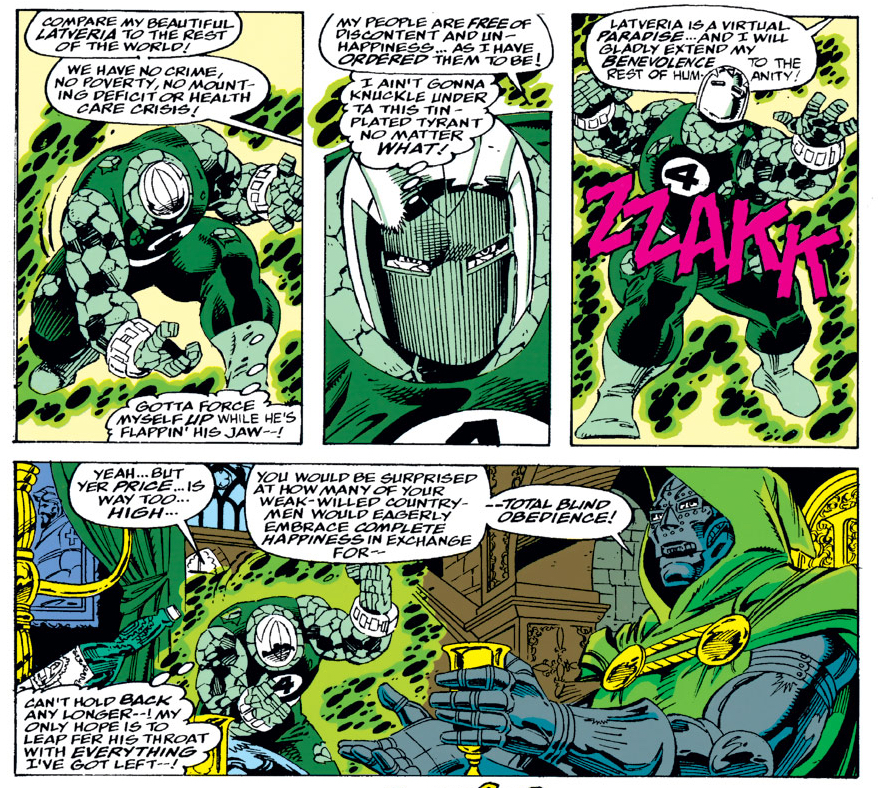 1:01:31-1:07:03: Speeding towards the end of the episode, we rush through FF #380, in which Doctor Doom and the Thing share a meal and a brief connection — one that Doom’s henchmen don’t notice, strangely — and a random alien force turns into an invincible zombie because, sure, why not. Everything else makes perfect sense by now, after all.

1:07:04-1:14:47: There’s a lot to dislike about Fantastic Four #381 — the generic-looking villain who raises the specter of Don Perlin’s Defenders designs, although he also prompts Jeff’s characterization of him as “Knockoff Darkoth”; the unsubtle-as-hell “Maybe Malice is evil” moment; DeFalco and Ryan’s seeming inability to stage an exciting action scene — but it really might all be redeemed by the last page reveal, which is genuinely kind of wonderful in both humor and shockingness. It also fixes that whole problem about Reed Richards being kind of dull by comparison. Are we… are we ending on a high note…?

1:14:48-1:24:46: I go back to a conversation that appeared as the cold open to Episode 44, and ask Jeff, is there really something to like about these comics? His answer may surprise you (if you’ve not really been paying attention to what he’s been saying earlier in these last two episodes).

1:24:47-end: Finally, we wrap things up by looking ahead to next episode — where we’ll take on #382-388 — and mention, as always, our Twitter, Instagram and Tumblr accounts, not to mention the the Patreon page that makes this whole thing possible. As Alex Chilton once so poignantly sang, thank you, friends.