Previously on Baxter Building: Was there ever life before Tom DeFalco and Paul Ryan’s Fantastic Four run? By this point, it’s genuinely hard to remember what this comic used to be like, but I’m pretty sure it didn’t involve Reed Richards being dead and his place in the team kind of being taken by Scott Lang, Ant-Man. Or… did it…? 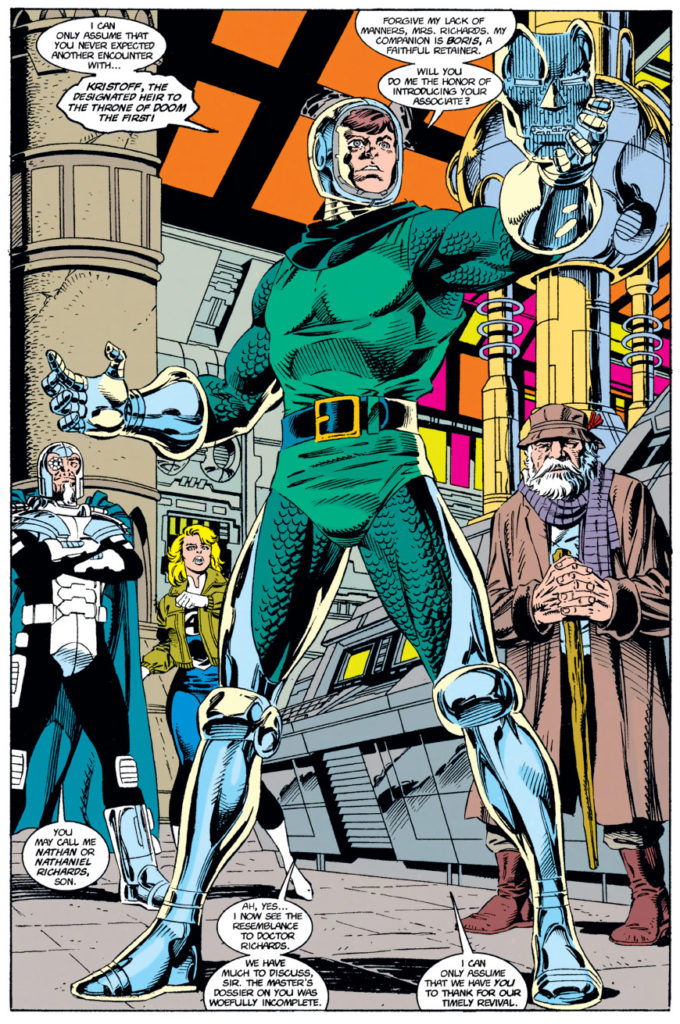 0:00:00-0:12:24: We open with an exceptionally brief cold open — because we’d just recorded the minicast about Stan Lee — before getting into a discussion about whether or not the following comics, which are very, very bad, are better if you fall into a Stockholm Syndrome-esque feeling of apathy about the whole thing. (Spoilers: Jeff is wrong. These are bad comics.) 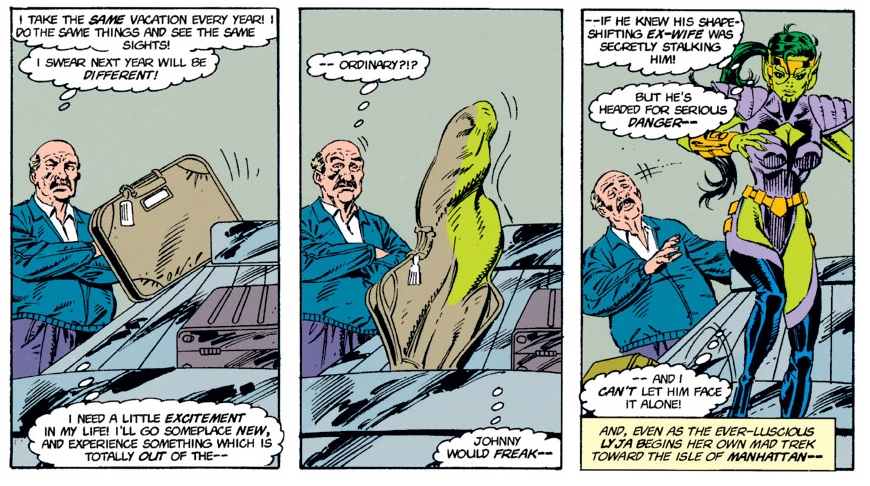 0:12:25-0:31:31: Fantastic Four #397 opens a four-part storyline that asks the important questions like, “Does anyone actually care about the Watchers?” and “Has their stolen Skrull spaceship always been called the Stealth Hawk?” Along the way, Jeff and I also discuss Lyja’s poor self-esteem, cheap travel tricks for shape changers and whether or not Nathaniel Richards is everyone’s Daddy, not to mention the one thing you really shouldn’t do with deadly technology. 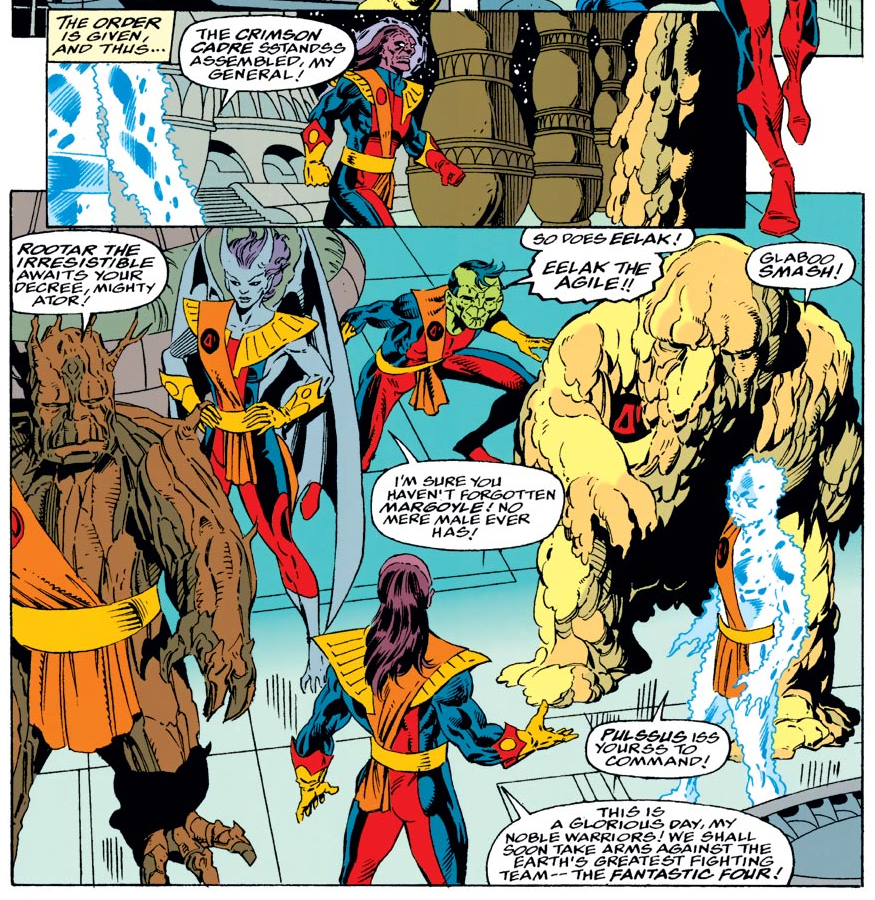 0:31:32-0:46:21: You didn’t know that you’d tuned into this podcast for Jeff’s impression of Tom DeFalco as Beat Poet, but with FF #398, you’ll soon understand. But don’t lose interest after that, because there is an especially lame reveal about Flaming Sue, the start of Jeff’s love affair with Kristoff, and the debut appearance of some Inhumans you’ll almost certainly immediately forget about, as well. 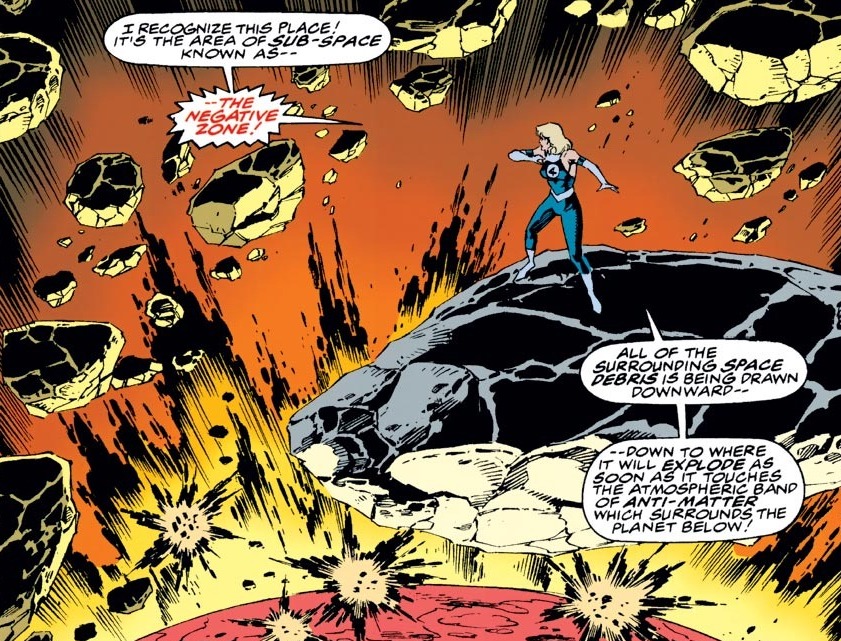 0:46:22-1:05:54: If nothing else, Fantastic Four #399 proves that, when it comes to this series, all roads lead back to the same asteroid floating around the Negative Zone, as well as the fact that, try as it might, this series can’t rid itself of Reed Richards, even if its evil versions called the Dark Raider. Also, there’s more of Margoyle, which is worth the price of entry all by itself. (As well as another reason to adore Kristoff, who has already had it with Scott Lang, just three issues in.)

1:05:55-1:09:05: We take a brief interlude as I summarize what little everyone needs to know about Fantastic Force #7, which crosses over with the current FF storyline and reveals why Sue isn’t dead, while also exposing how stupid the Fantastic Four apparently is. 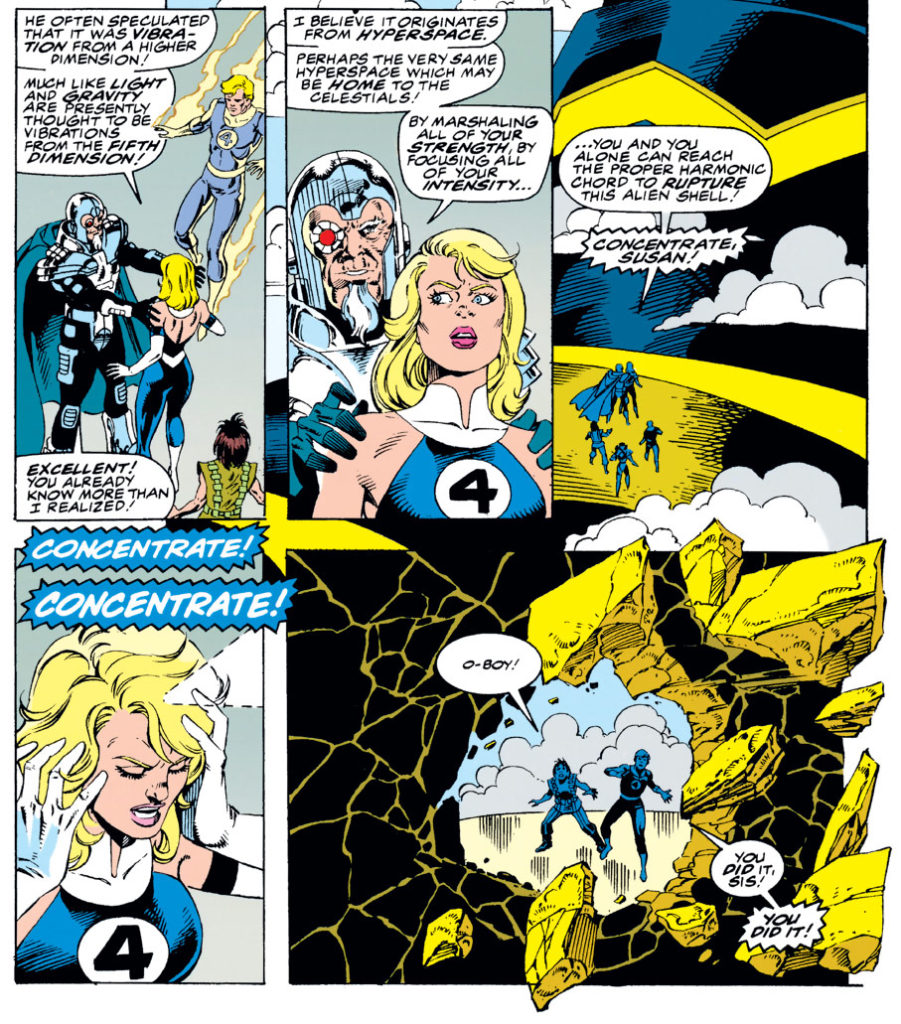 1:09:06-1:26:24: It’s Fantastic Four #400, the final anniversary issue of the entire run, and one spent with a story that is exhausting in its ridiculousness. It’s the Watchers versus the Celestials, except it’s not; it’s the Fantastic Four and Fantastic Force versus… Aron the Watcher, I guess? And the innards of a Celestial, even though it really shouldn’t be like that? But at least there are random guest appearances, an essay about the history of the series that suggests that no-one actually wanted the job of writing it, and a memorial for Reed Richards. Is this… progress…?

1:26:25-1:27:54: Another aside, as I introduce Jeff to the plot complexities of Fantastic Four: Atlantis Rising #1, the first issue in the crossover that’s going to swallow the book whole for a couple of months. Come for the destruction of the Watcher’s house, stay for… I don’t know, actually. Maybe we should all leave. 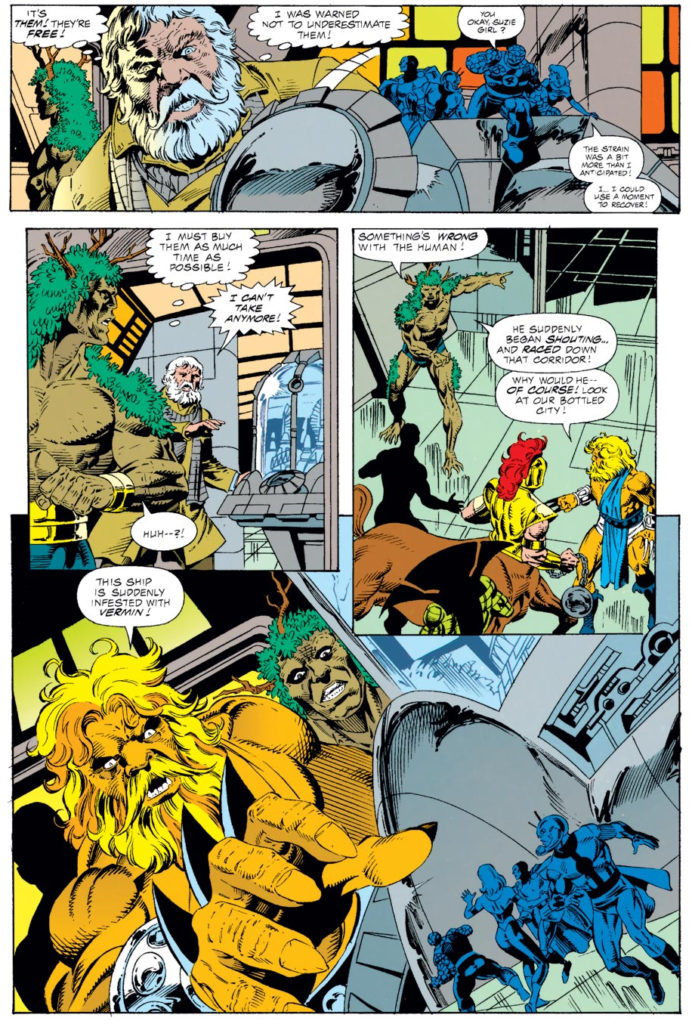 1:27:55-1:35:27: Atlantis continues to rise in FF #401, in which Maximus seems to think there’s something more special about the Human Torch than Jeff and I do, and we discuss Nathaniel Richards’ novel approach to theft, especially the theft of tiny little miniaturized cities. Thor’s appalling costume is commented upon as well, and not for the last time.

1:35:28-1:37:02: Fantastic Force #9 continues the storyline, and I once again tell Jeff all he needs to know, as he was smart enough not to track down an issue to read it. (In my defense, at least I didn’t read the Warlock and the Infinity Watch issues that tied in; I’m not that much of a completist.) 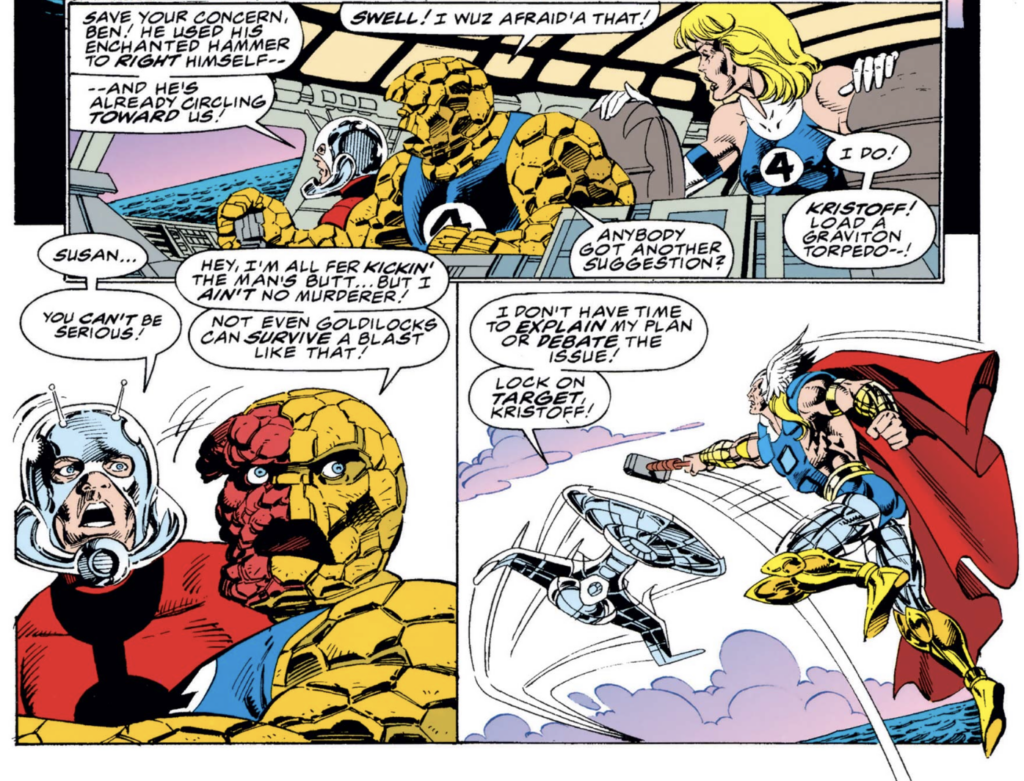 1:37:03-1:46:28: What is the most enjoyable thing about Fantastic Four #402? It just might be the fact that Namor really doesn’t take directions to just calm it down a little very well, unless somehow leaping through windows and having fights that aren’t quite as dramatic as Tom DeFalco wishes you thought they were is his version of calming things down. Which is… not impossible, really. Also! Sue Storm without Malice is being written just like she’s still possessed, and the Fantastic Four has the perfect solution for getting rid of the Norse God on the roof of your space ship.

1:46:29-1:47:45: I could exaggerate and pretend that I recapped Fantastic Four: Atlantis Rising #2 to close out the crossover, but I’ll level with you; I mostly just complained about how bad it was. Sorry, all. 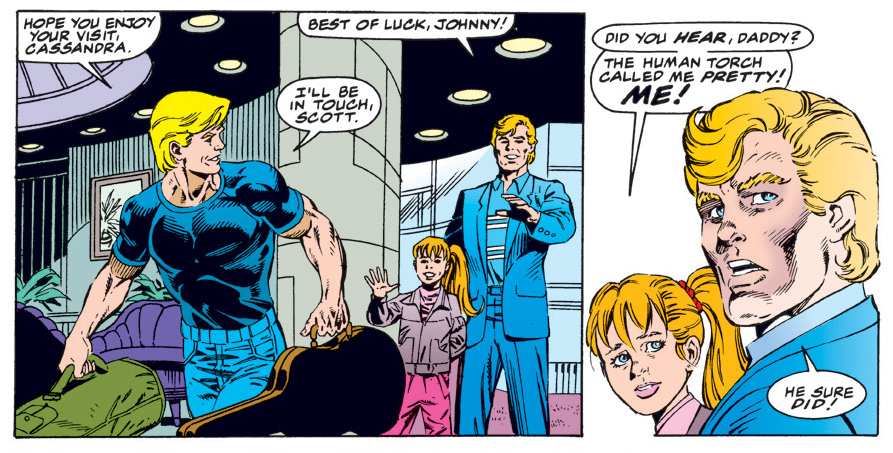 1:47:46-1:59:27: Hey, who remembers that whole thing about an archaeologist finding a statue of the Thing from 20 issues or so ago? Tom DeFalco, who tries to bring that storyline to a close for reasons that defy explanation in Fantastic Four #403. But who cares about that when Kristoff and Johnny Storm are flirting with Scott Lang’s daughter, who is of an entirely indeterminate age because Paul Ryan can’t draw anyone between the ages of, say, 5 and 35? Not Jeff and I! 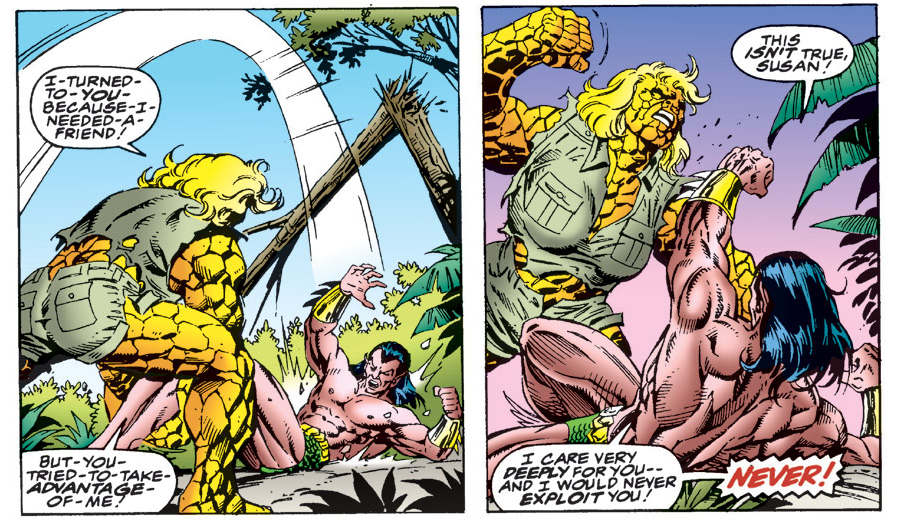 1:59:28-2:03:41: FF #404 sees the Thing take on lots of other Things, and Sue Storm as a Thing take on both Namor and her feelings, because… oh, who even knows at this point. Meanwhile, Boris, Kristoff’s faithful manservant proves that he can’t do something as simple as say, “Eh, I haven’t seen your kid,” and all hell breaks loose, because why not? That’s just the kind of comic we’re reading by this point. 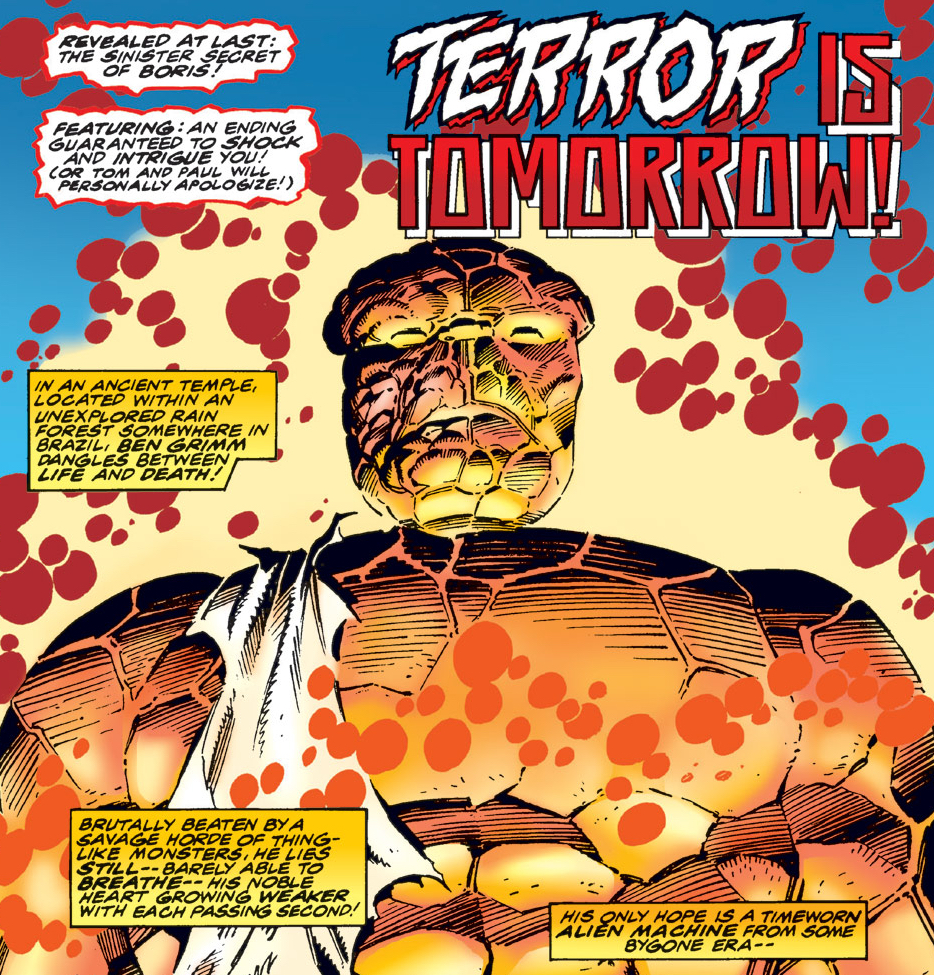 2:03:42-2:13:36: An exhausted Jeff and I finally arrive at Fantastic Four #405, in which Ben Grimm turns human — again!— and Boris reveals his true colors, if “true colors” actually means, “Tom DeFalco changed his mind at the last minute and even though everyone can tell it’s supposed to be Doctor Doom, it’s not.” Don’t think that I’m not upset about that, either…

2:13:37-end: We careen towards the end of the episode by talking about last-minute rewrites, the sense of exhaustion apparent in everyone by this point, and look forward to what we’re doing next episode, which is… Fantastic Four Annuals #24-27. The end is in sight, dear friends…! But don’t forget our Instagram, Tumblr and Twitter in the meantime, not to mention our Patreon. As always, thank you for listening and reading along, and I promise, our DeFalco/Ryan nightmare is almost over.