Previously on Baxter Building: It’s all change with the World’s Greatest Comic Magazine with the issues we’re covering, and not just because there is no way to describe the Fantastic Four era we’re reading as the world’s greatest anything anymore. Reed Richards is dead! Reed and Sue’s son has been kidnapped to a dystopian future, returned with an entirely vague mission and possessed by something that is either an evil part of his mother’s personality or an entirely alien entity, don’t worry we’ll never find out! The Human Torch and his alien wife have had a baby egg! The Thing has half his face melting because he was attacked by Wolverine! How can anyone put up with this level of excitement? Funny story; it’s actually almost unbearably boring. 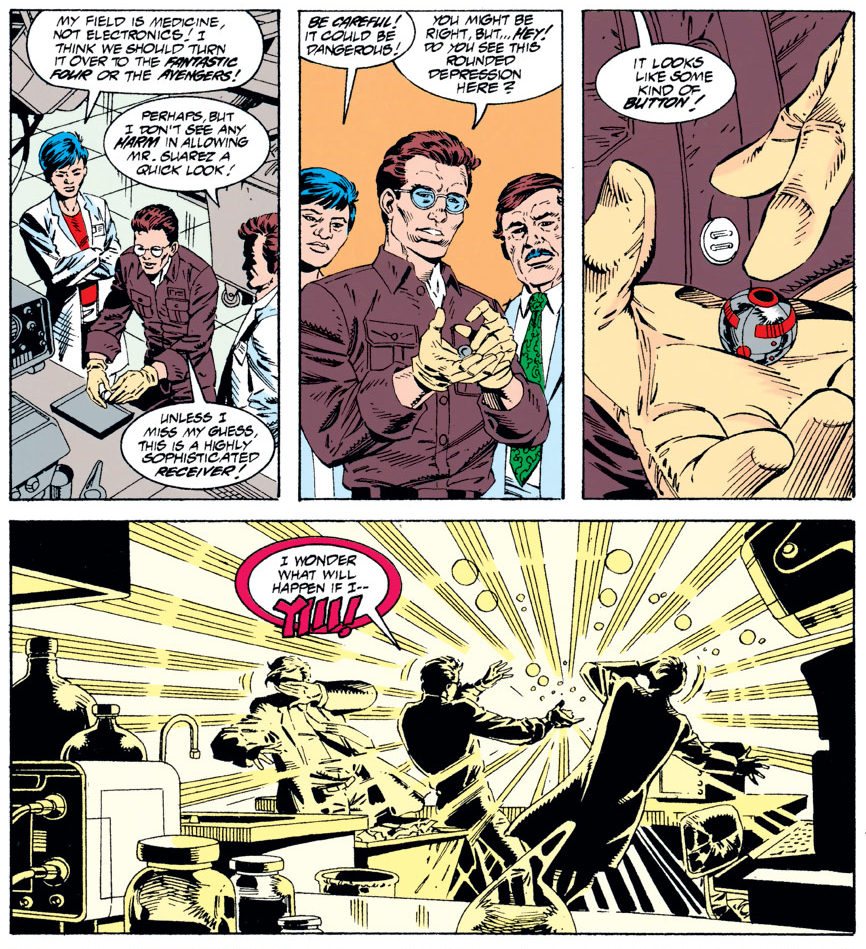 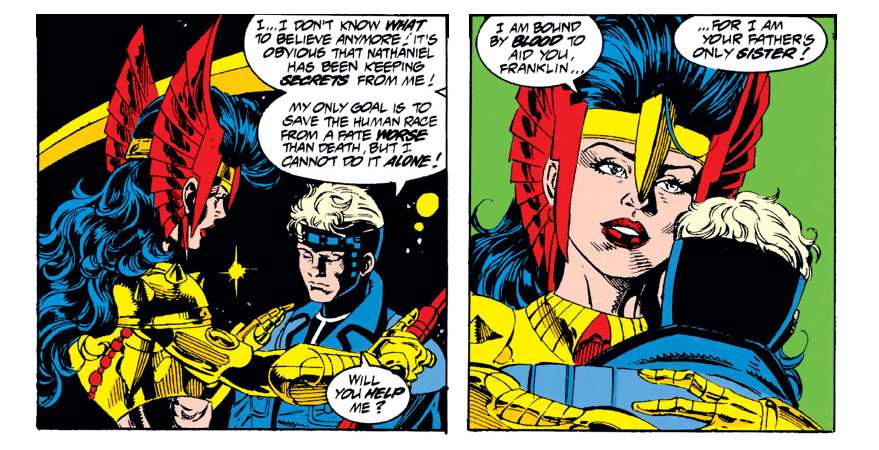 0:09:25-0:33:21: We open with Fantastic Four #389, a comic that opens with a reminder of how terrible the Watcher actually is — don’t worry, there’ll be many more reminders throughout the next few issues — before introducing a mystery for the FF to explore that they will almost immediately forget. But why should they remember when there’s the Collector’s terrifying new look and the introduction of an exciting new hero to deal with? (Note: Said new hero is not particularly exciting, as he has what Jeff describes as “absolutely no kind of backstory in any form.” He also has an origin that makes no sense, as will be revealed in the very next issue.) Oh, and Sue, Ben, Scott Lang and Namor all end up in a strange new world that… let’s be real, makes very little sense if you think about it too much. Meanwhile, I accidentally sum up this entire run of issues with the phrase, “On the one hand, it kind of makes sense, but on the other, it’s done so poorly.” Well done, me! 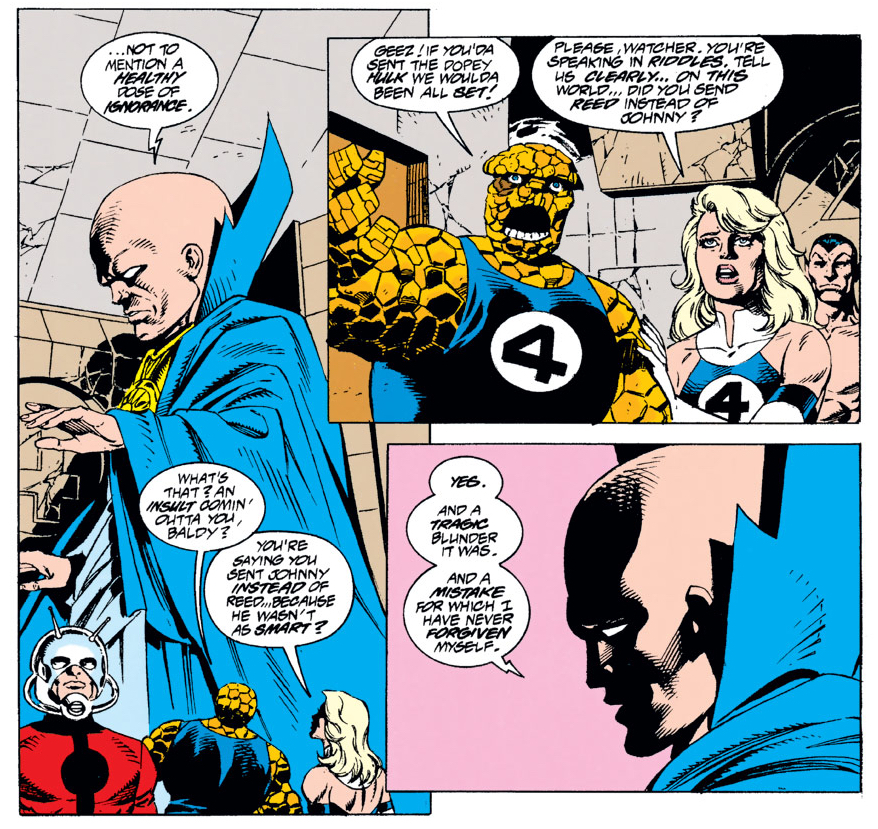 0:33:22-0:46:58: In which I describe FF #390 as “a “What? No” issue,” which is perhaps being too kind to something that is, basically, a comic of three different expositionary scenes, all intercut in an unclear manner that manages to rob each thread of backstory of any true narrative tension. To make matters worse, there’s a case to be made — and I half-heartedly make it — that DeFalco and Ryan have actually set up an interesting scenario with this storyline, even if it’s something that they never actually take advantage of, or even really spell it out for themselves and the readers. Seriously, this is an impressively frustrating run for all kinds of reasons. 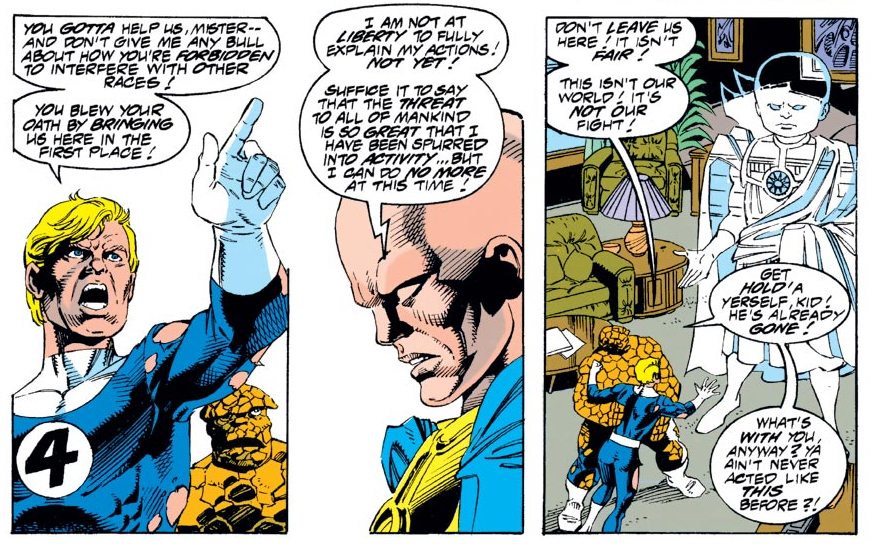 0:46:59-1:30:12: I argue to Jeff that we should cover Fantastic Four’s #391 and #392 together because we’ll cover them really quickly, and then… we don’t. In my defense, there’s not that much plot in #391, but we found a lot to talk about, anyway, including the “in-text bitchiness” about the value of Johnny Storm’s stupidity, the debut of Fantastic Force and just how useless they actually are in action, the deaths and immediate backtracking of the rest of the Fantastic Four, the true identity and final fate of the Dark Raider, the immense stupidity of the final fate of Malice, and whether or not Tom DeFalco is trying to make a point about Reed Richards with what he does about the absence of Reed in the book and on the team. Oh, and yeah: The Fantastic Four splits up one more time, too. The highlight of the whole thing is certainly Jeff’s accidental summary of this run of issues: “I don’t know what you’re trying to say here, Tom DeFalco, and I’m sure the answer is nothing.” 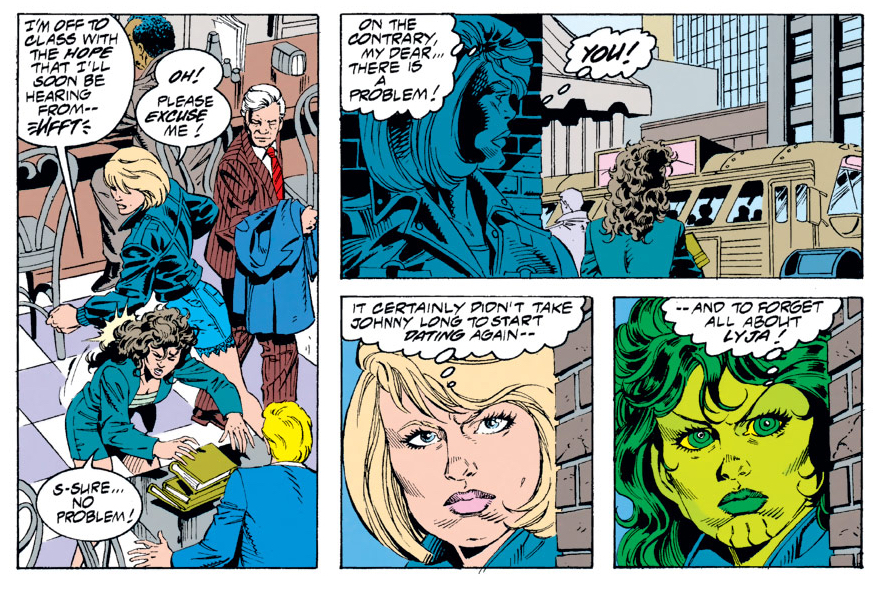 1:30:13-1:45:53: FF#393 opens with a back-up strip recap of what’s literally just happened in the book, because… Oh, I don’t even know at this point. But as the series goes from hacking Lee/Kirby to hacking John Byrne — and oddly revisiting ideas from the end of the Steve Englehart run, as Jeff and I get into briefly, discussing whether or not DeFalco is in the same camp as Englehart or just the very opposite — we talk about the major disappointment of the issue: Not letting the Johnny/Lyja storyline die a death, or at least pretend to be dead for at least one fucking issue, for the love of God. 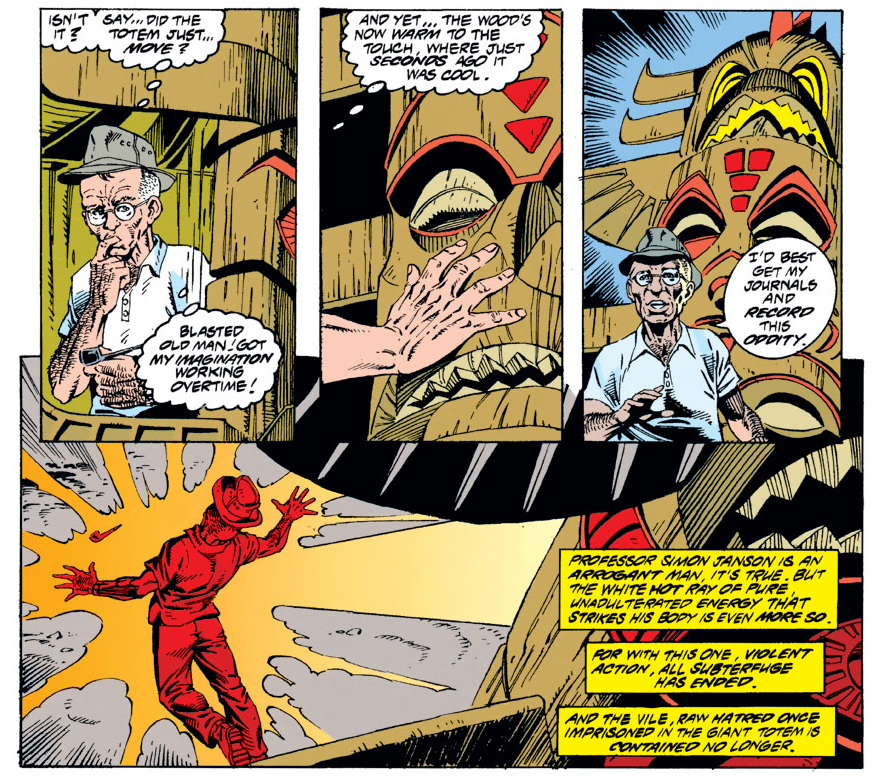 1:45:54-1:55:36: How bad is Fantastic Four #394? Bad enough to get Jeff to declare ”This is what I want from my comics! Just cultural appropriation and goofiness!” But what else could we expect from an issue that seems to be inspired by all the worst elements of the backstory of Wyatt Wingfoot, only with the sheen of the arguably more progressive 1990s? Elsewhere, Jeff tells me about the link between Hitchcock’s Vertigo and Claremont’s X-Men (I played it cool during the recording, but this fucking blew my mind, I have to tell you) and we rewrite the Lyja subplot in a couple of ways that would’ve made more sense and arguably been more entertaining. “In a collection of shitty comics, it’s the shittiest,” I say about this issue, and I stand by my belief. 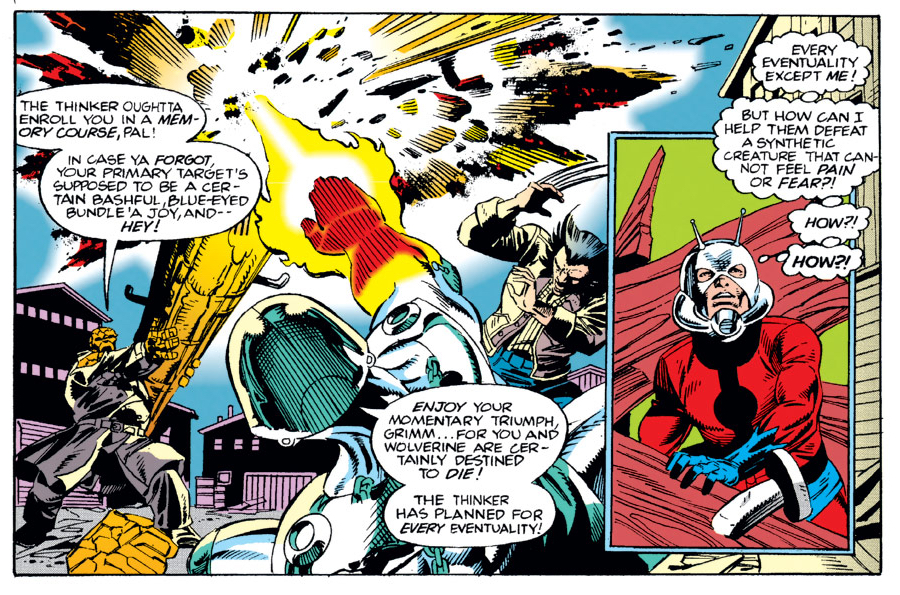 1:55:37-2:07:TK: Out of nowhere, FF #395 is… pretty good…? I mean, that’s inside the context of, “It’s actually terrible, but we’re grading on a curve here,” but still. It’s an old school Marvel Two-in-Oneissue, basically, but we address that the Mad Thinker is actually a really bad genius who doesn’t understand what “unforeseen” means, and the implication of the new suggestion that Doctor Doom may just be the half-brother of Reed Richards. While Jeff and I kind of love it as a concept, neither of us trust the creative team to pull it off, which only seems just and sensible at this point, let’s be real. 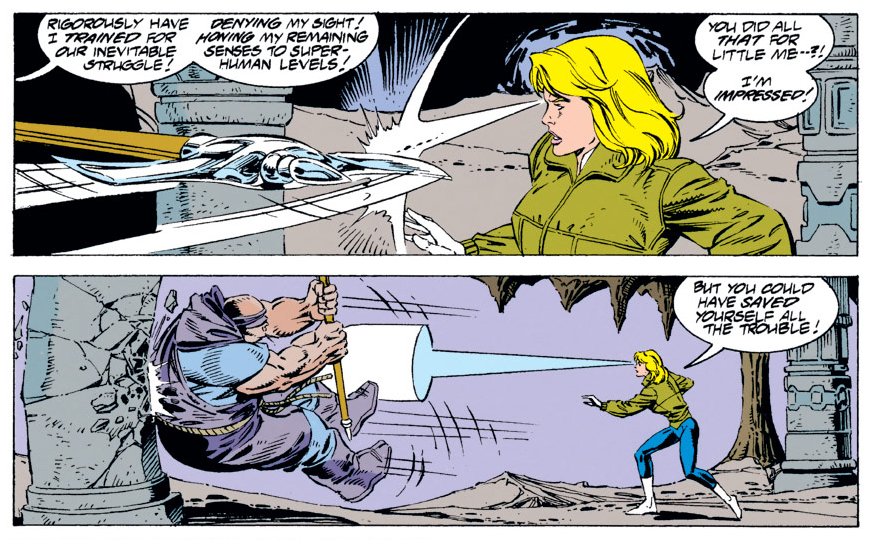 2:07:53-2:30:33: Fantastic Four #396 is “an issue that you kind of immediately forget after you read,” according to me, and I’m not wrong in that. There’s some stuff in there worth reading, nonetheless, including the astonishing and needless return of the Flaming Sue and the far greater return of a very cocky and Steve Englehart-esque Johnny Storm. We also discuss whether or not DeFalco is dedicated to making this book sell even if it goes against his own instincts, and what is missing as a result. Is it heart? Is it spirit? Or simply quality…? 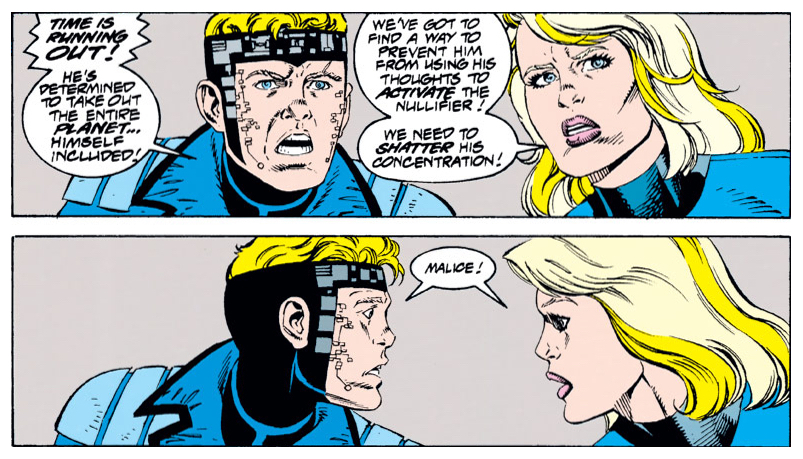 2:30:34-end: Next month, we edge ever closer to the end of the run — and the end of the Baxter Building itself! — with issues #397-405, but before we get there, there’s a Tumblr, Instagram, Twitter and Patreon to go check out. Plus, an all-important programming note that we don’t cover in the show itself: There will not be another Wait, What? or Baxter Building until November, because one of us is out of the country being an international jet-setter. (Patreon supporters, expect some Baxter Bungalow material in the meantime. If I have to suffer through Fantastic Force, I’m not doing it alone…!)