Previously on Baxter Building: When we last saw the FF — ignoring a fill-in by Al Milgrom — they’d just returned from a time-traveling adventure that returned the team to the classic line-up for the first time since… when, the Roger Stern run back around #304? If that seemed like a retro move, don’t worry — we’ve reached the arrival of Tom DeFalco and Paul Ryan, which might be the most purposeful retro run of the entire series, so looking backwards is where it’s at. 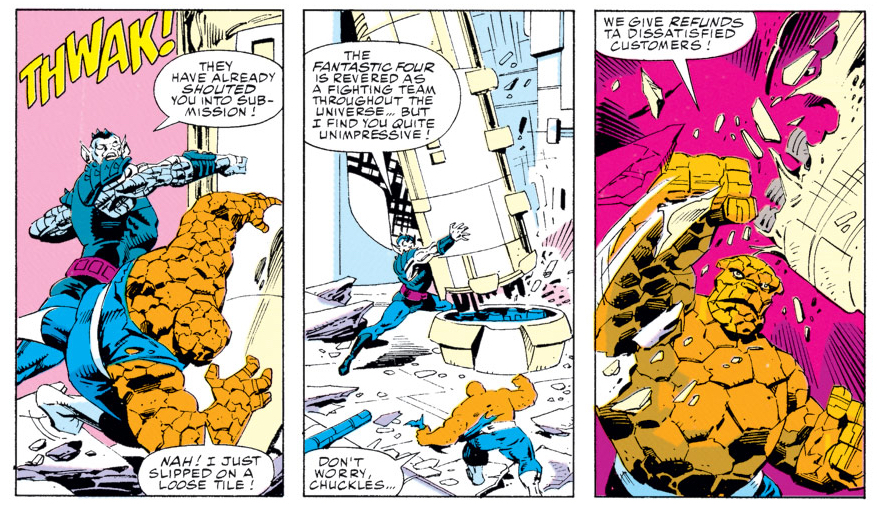 0:00:00-0:10:31:19: We start off looking ahead at the entire DeFalco/Ryan run, and marveling at the fact that it’s one of the three longest runs by a creative team on the Fantastic Four series — at least the first volume — with Lee/Kirby and Byrne as the other longterm creators. We also touch on the new run’s complete lack of Sharon Ventura, at least to start with, with the character written out between issues. Alas, poor Shary…!

0:10:13:20-0:44:36: Fantastic Four #356 sets the tone for what’s to come, with an opening sequence that lets you know just what to expect from DeFalco and Ryan run as a whole — something that Jeff likens to “brain damage comics,” although he’s not quite sure who’s actually suffering the damage. We talk about all manner of things, including a fight that seems far too violent for its own good, the disconnect between dialogue and visual actions on the page, Johnny’s unfortunate sexy talk and the way it breaks Jeff’s brain —

— the overachieving nature of the Puppet Master, and why Reed Richards’ faith in the youth is misplaced. All this, plus the New Warriors, too! (And, yes; they have a lot to do with why faith in the kids is a bad idea. Sorry, New Warriors fans.) 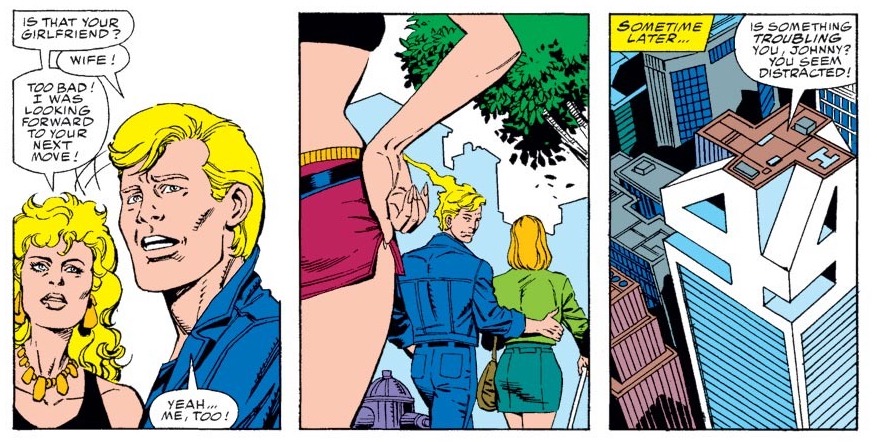 0:44:37-1:25:16: The discussion of FF #357 starts with addressing the really dull elephant in the room: How boring Paul Ryan’s artwork is. But is the problem Ryan or inker Danny Buladani? Also, we dig into what the hell is going on with Johnny’s marriage — especially in light of what’s going to happen in the very next issue. (The problem might be Johnny’s understanding of how marriages work, as we learn in a conversation with Sue.) Meanwhile, Tom DeFalco manages to step on his own tension by oversharing with the reader, the Fantastic Four don’t understand how sandwiches work, and oh my God, Alicia is a what?!? 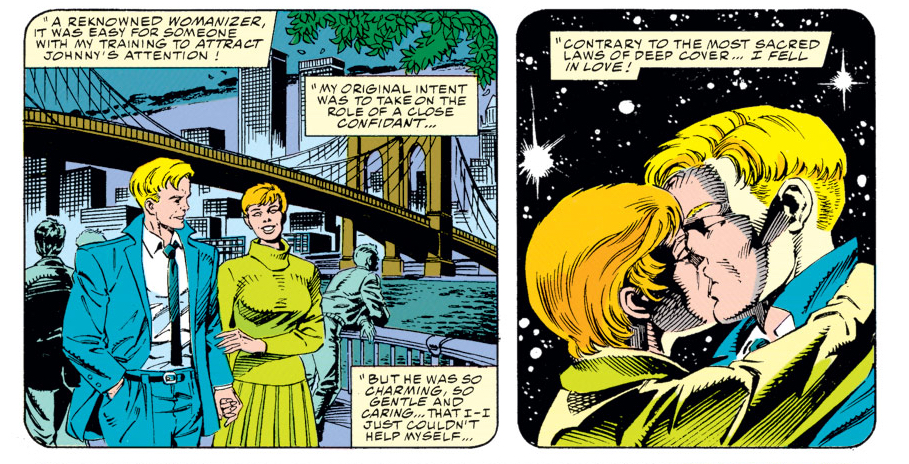 1:25:17-1:59:15: Not only is Fantastic Four #358 a triple-sized 30th anniversary spectacular, not only does it include the debut of Paibok the Power Skrull, not only is there the reveal of the Mad Thinker’s great revenge (Spoilers: He gets out-thought), not only is there a discussion of the etiquette of Skrull Deep Cover,  but the issue brings perhaps the most surprising shocker of them all: Jeff and I both kind of dig the Alicia Was A Skrull retcon! So much so, in fact, that we argue in favor of it and ignore the fact that the pin-ups mentioned in passing are by Mike Mignola, and barely talk about Art Adams’ artwork for the Doctor Doom back-up. (We do, however, get into a disagreement over the subtext of the back-up, because of course we do.) Really, the takeaway from this issue might be that we talk briefly in two different contexts about how subtle Tom DeFalco’s writing can be when you least expect it. Yes, really! 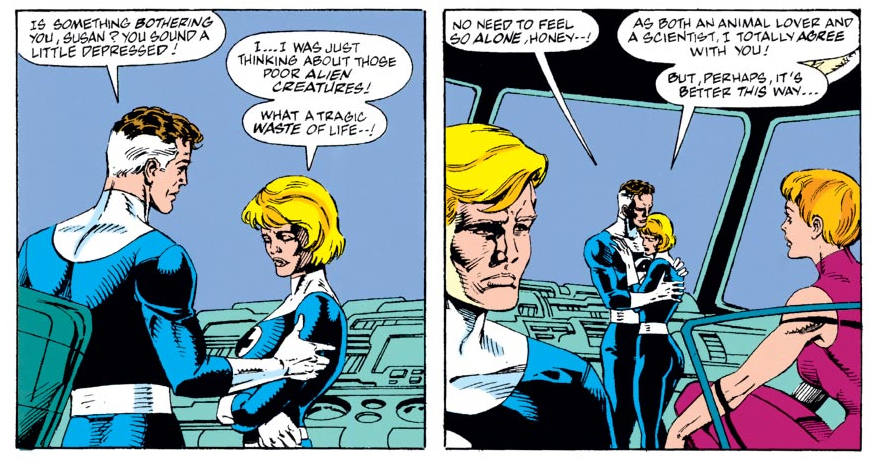 1:59:16-2:10:05: Realizing that we’ve already spent two hours talking about just three issues of a comic, we try to speed through FF #359, in which the FF are rescued in space by Brainiac. No, wait, I mean a very boring Predator rip-off, as Jeff points out. Or maybe neither, because Tom DeFalco just offers up a generic villain in terms of dialogue and really, who cares? At least we learn why Reed Richards likes animals, kind of. 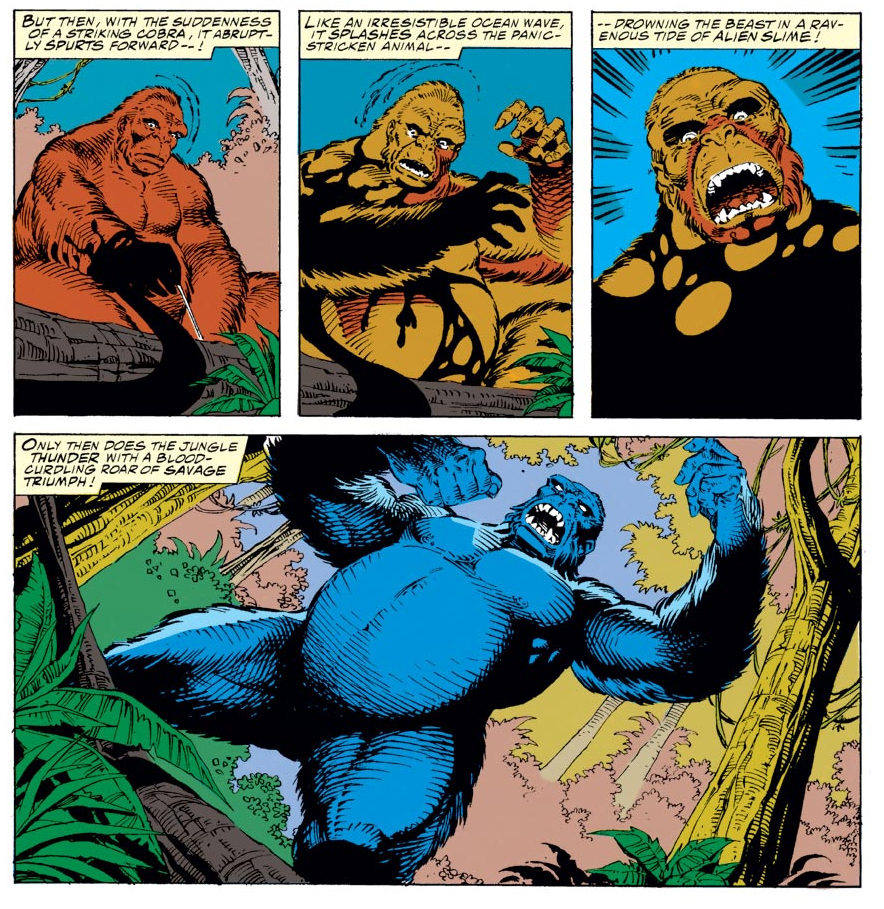 2:10:06-2:17:49: Sure, “Dreadface” might be the worst name for a Venom rip-off, yet I can’t deny that Fantastic Four #360 is actually kind of a great little comic because it’s wonderfully, shamelessly trashy. We rush through this one very quickly, ensuring that we quickly arrive at… 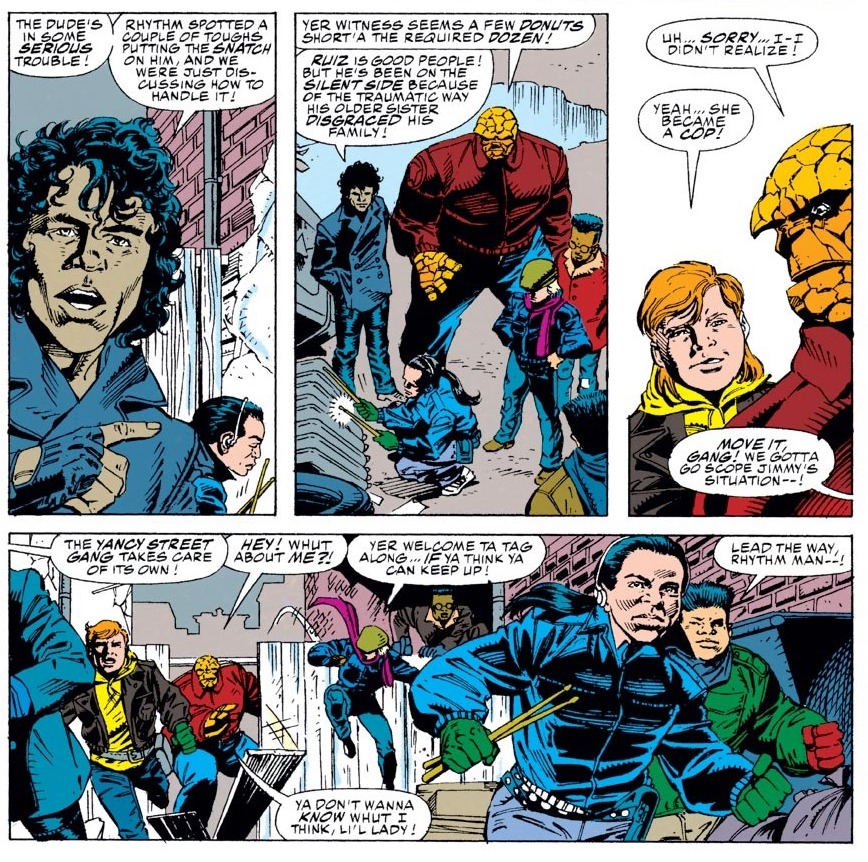 2:17:50-2:27:42: …FF #361, which might be one of the strangest and, let’s be honest, worst Christmas comics ever. As I lose my shit over the utterly unnecessary introduction of a Yancy Street Gang that is, too all intents and purposes, a great rip-off of the Newsboy Legion — no, really, they’re wonderful — Jeff points out that the story of this Christmas issue is that Doctor Doom has decided that he’s not going to solve drug addiction after all, because happy Christmas! Still at least we manage to drop a reference in to Marvel Two-in-One, a comic that — in case everyone’s forgotten — Tom DeFalco used to write. No wonder his Thing is so on-brand.
2:27:43-end: We wrap things up quickly, talking about the issues we’ll be reading next episode — #362-370 — and the fact that, in addition to the Twitter, Tumblr and Patreon, we now have an Instagram. We leave things a little vague about when the next Wait, What? is, because we actually hadn’t figured that out before recording, but it’ll be in two weeks time, so now you know. Until then, thank you as always for listening and reading. Who knew the first issues of the DeFalco/Ryan run would be so enjoyable…?