Previously on Baxter Building: It’s all been leading to this — literally; we’re at the final episode of the series, and have made it through 405 issues (and 27 annuals, and 4 Giant-Size special issues) to get here. All you really need to know, though, is that the current incarnation of the team is an untraditional one, because the Human Torch is off running Fantastic Force and Reed Richards is dead. (Spoilers: As you’ll see momentarily, he’s not.) So, right now, the team is Sue Richards, Ben Grimm, Kristoff the kid adopted and brainwashed by Doctor Doom, and Namor the Sub-Mariner. No, really. 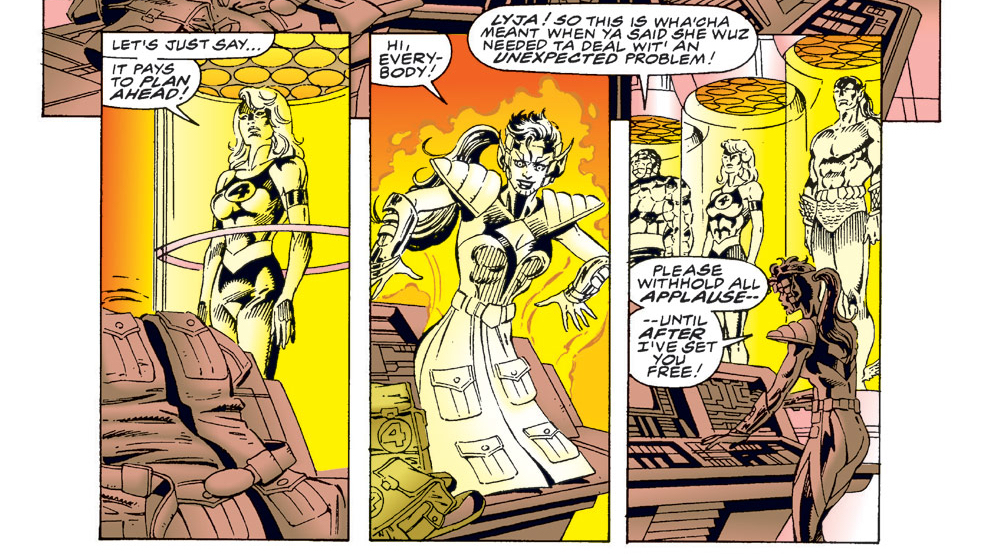 0:00:00-0:08:16: We introduce this episode, in which we cover Fantastic Four #s 406-416, with a shocking reveal: We liked these issues far more than we expected. I think I probably liked them more than Jeff, but considering how much both of us have grown to dislike earlier DeFalco/Ryan issues, this is nonetheless cause for celebration and then some. Or should we be concerned about the problem of Stockholm syndrome?

0:08:17-0:30:17: “There’s a wonderfully, like, strange self-conscious or self-aware energy” about Fantastic Four #406, which helps wins us over immediately; Doctor Doom returns, the book gains a pep in its step — and a sense of humor — that it’s been missing for a long time, we discuss what may (or may not) be Paul Ryan’s best character design in the entire series, and Jeff shares a very sound theory about Tom DeFalco’s approach to character development that includes a get-out clause if people don’t happen to enjoy the change. (Also, catch Jeff’s burp that I forgot to edit out. Oops.) 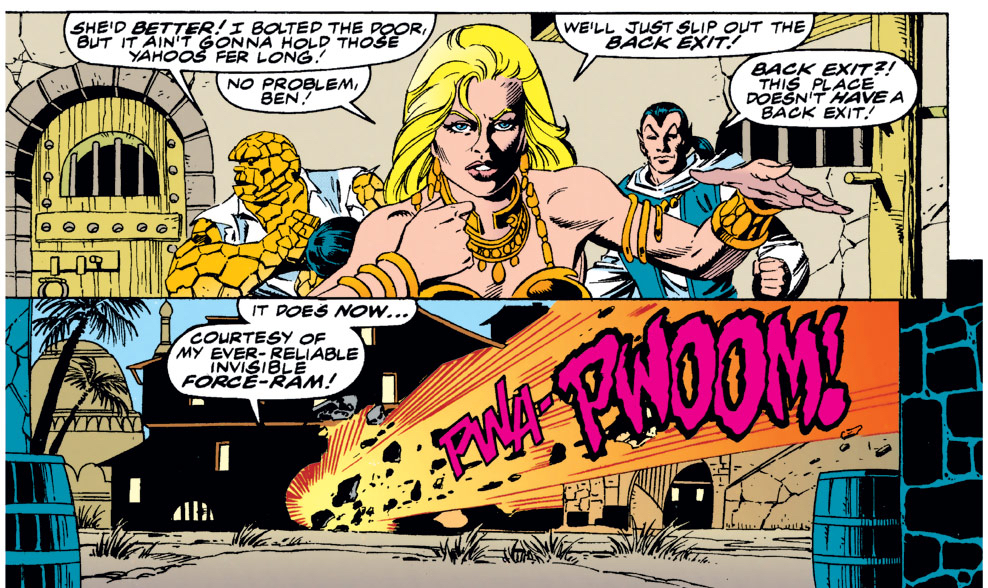 0:30:18-0:57:02: Barbarians are a letdown in FF #407, but there’s a lot to enjoy in this issue nonetheless, not least of which is the series’ new-found brevity and some subtle character work that may or may not actually exist and perhaps we were just reading far too much into it. More importantly, though, Reed Richards returns, in what is probably the least shocking plot development this series has ever seen; this has been coming for, what, two years plus at this point…? Even more importantly than that, in our final Baxter Building, Jeff finally decodes what Fantastic Four actually is as a series. Or, as I complain in the episode, “it takes us fifty months to realize that FF is a romance book.” 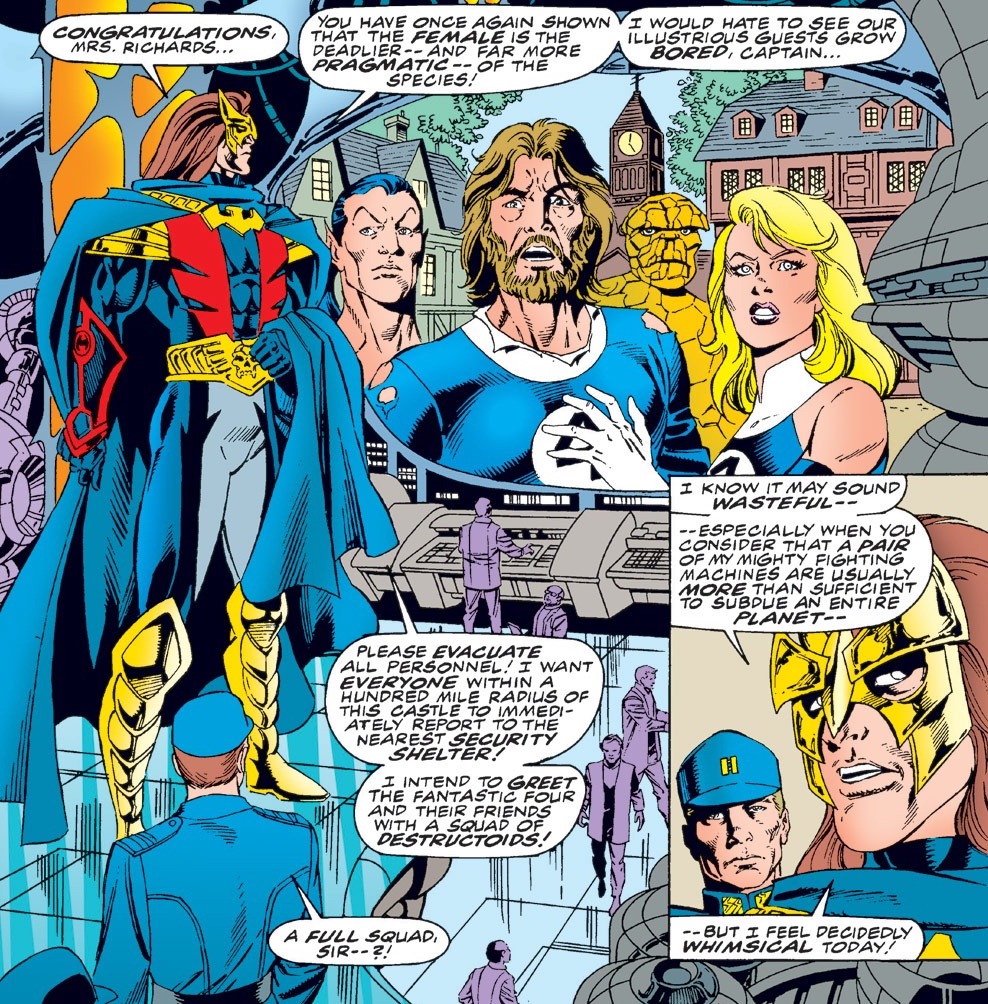 0:57:03-1:11:47: The fact that Fantastic Four #408 features the first full teaming of the original Fantastic Four in… two years or so… comes as a surprise to both of us, and part of that is the surprise that they’d let the team be apart for that long. Meanwhile, Reed continues to be traumatized — but there’s a surprisingly good moment when he snaps when you least expect it. Oh, and we get an explanation for the powers of the new big bad, and Jeff snaps back into Tom DeFalco’s Science Isn’t As Bad As It Sounds mode. Are we… are we actually genuinely digging these issues…? 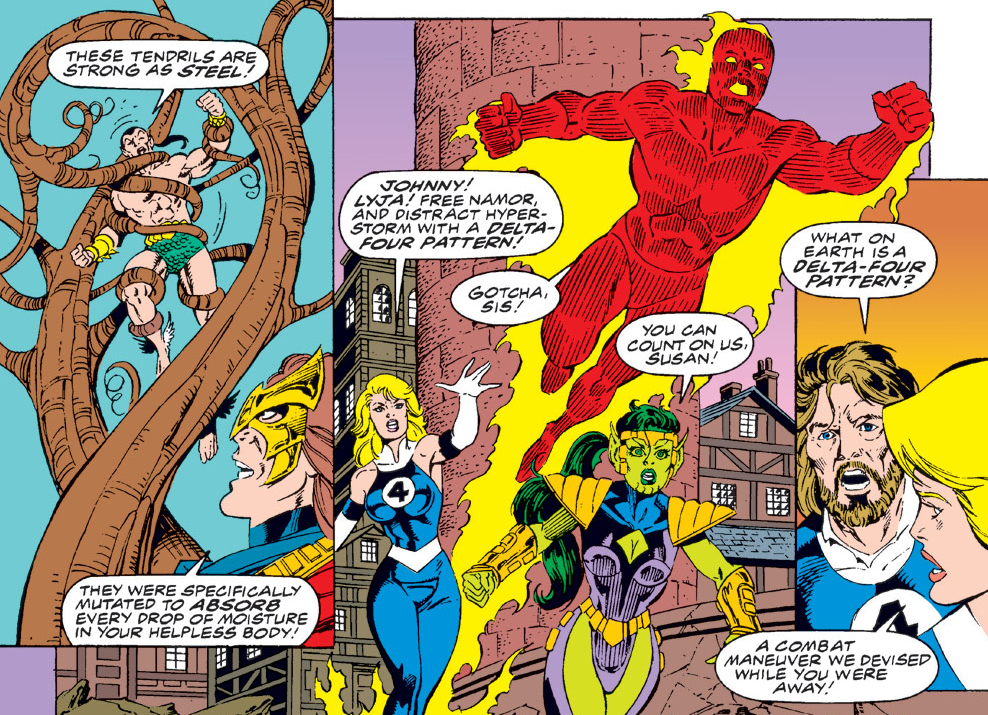 1:11:48-1:25:18: …Okay, perhaps not. The fourth and the final part of the storyline that brings Reed and Doom back pretty much falls apart thanks to an end that makes absolutely no sense, but that’s not to say that there’s no fun to be found in FF #409, especially when it comes to how wonderfully complicated Reed’s return is because he doesn’t fit in with things anymore. Do we just love dysfunction? Perhaps, but I feel that’s not a bad thing when it comes to this series. Oh, and there’s a brief Kristoff/Cassie scene, which will always recharge the batteries of one Mr. Jeff Lester, especially when he describes one character as looking like “a fetus with pants.” 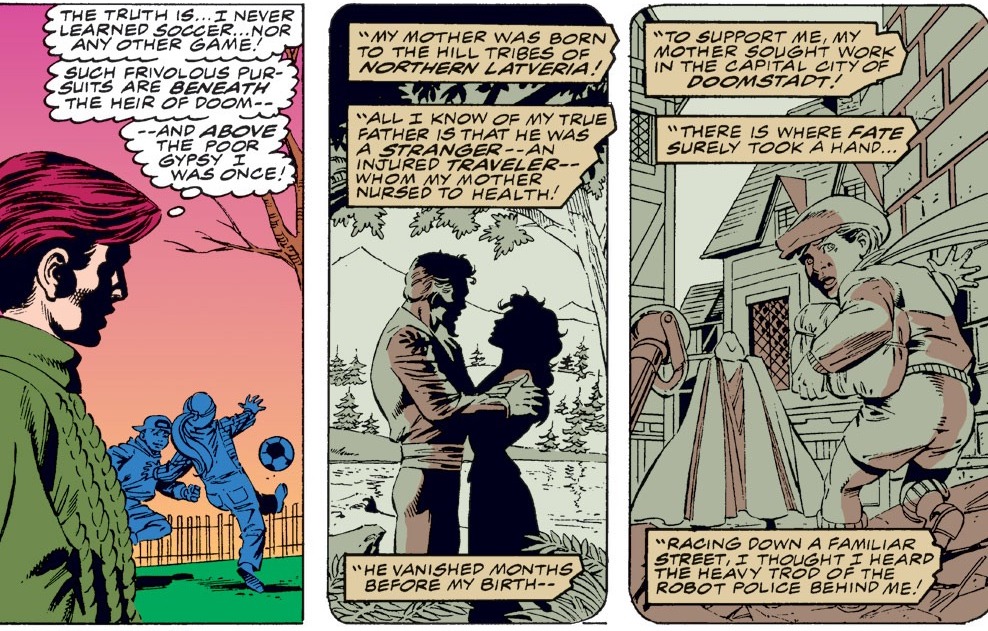 1:25:19-1:33:31: If we’ve decided that we can’t get enough soap opera, then good news: Fantastic Four #410 forgets that it’s a superhero comic altogether and just gets with the soap operatics. There’s a love triangle between Ben, Lyja and Johnny! Kristoff can’t play soccer! And we uncover the previously unknown link between 1980s pop sensations the New Kids on the Block and the Fantastic Four! (Sad but true: I honestly thought the New Kids were a ‘90s band and then I looked them up and now I feel old. Thanks, Tom DeFalco.) 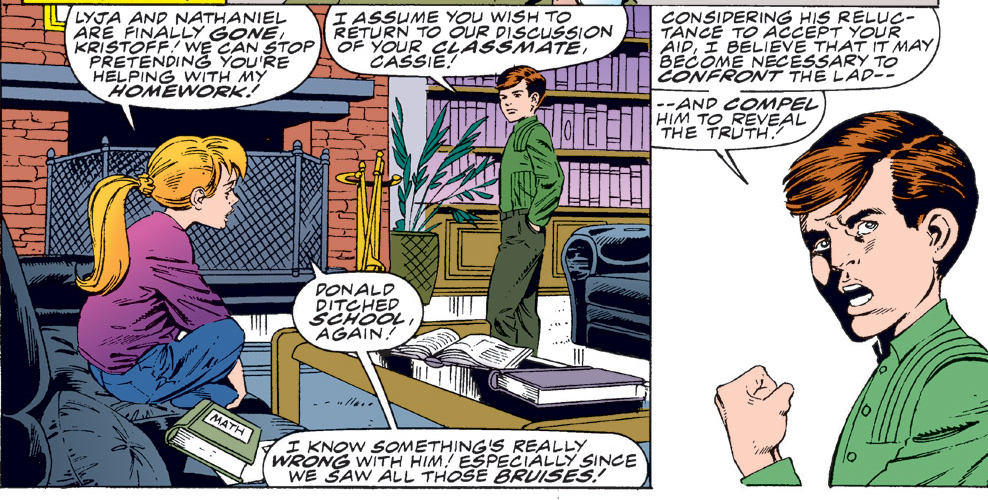 1:33:32-1:37:46: After a run of fun to genuinely great issues — albeit in reverse — FF #411 proves that DeFalco, Ryan and Marvel are true believers in the idea that you can have too much of a good thing, which is the only possible explanation for this stinker about Black Bolt going insane because his forehead antenna was damaged. Oh, I only wish I was joking. “What the hell is happening here? I don’t understand,” I say, and I think that’s entirely appropriate.

1:37:47-1:44:50: I have to say that there is a very good case to be made for [Fantastic Four] #412 being a mistake,” Jeff says, and he’s entirely right. Or perhaps you’re someone who thinks that it’s time for a showdown between Reed and Namor over who objectifies Sue more that ends up being a feint on the part of Namor because it’s the only way to un-traumatize Reed. If you are that person, please no. Jeff, at least, has a reason for this being a disaster beyond the toxic masculinity of it all, and it’s because it undercuts a story two issues from now. So, you know; all told, it’s a mess.

1:44:51-1:55:00: But… is it as much of a mess as FF #413 is? That’s a good question, because at least the previous issue didn’t have to deal with an inexplicable, narratively pointless guest shot by Doom 2099, which happens because… it’s a crossover with that book? Maybe? This issue does provide the chance for Jeff to resurrect his theory of the Negative Zone as a metaphor for the Shadow Self, even if — as has become traditional by this point — I am unconvinced that the Silver Surfer is anyone’s shadow self. Nevertheless, I’m genuinely glad we got to go back there in our final episode…! 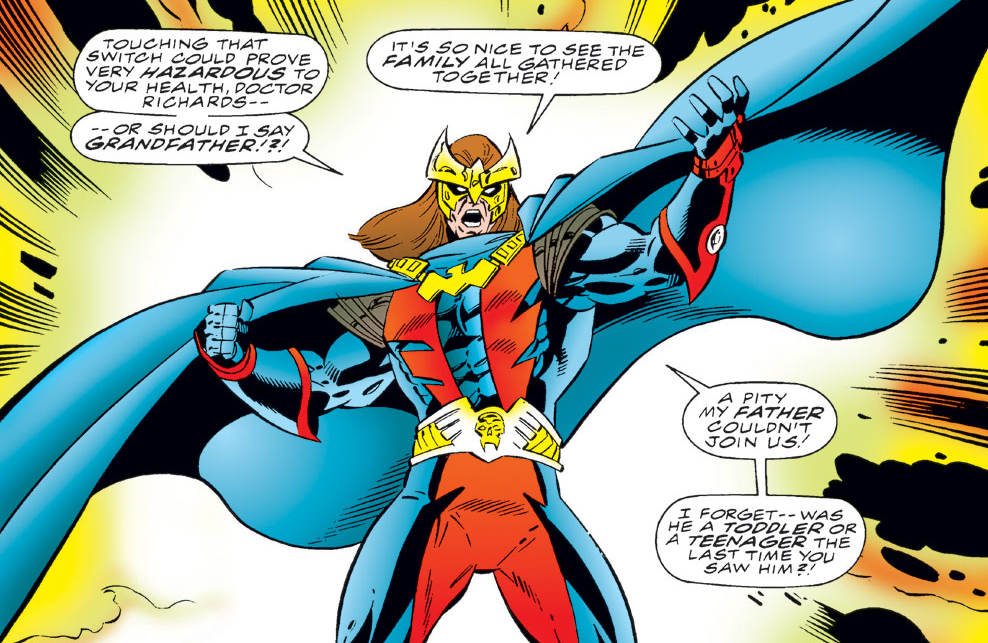 1:55:01-2:07:56: It’s clear, from quite how packed Fantastic Four #414 is, that Tom DeFalco knew that cancellation was around the corner, which would explain this busy final chapter to the Uber-story he’s been telling, on and off, for the past 40 issues or so. Who is Hyperstorm, the new bad guy behind everything? What role did Nathan play in everything? What the hell is Reed’s plan supposed to be, anyway? We ask the questions that matter, and only get slightly perturbed that some of the answers make no sense at all. 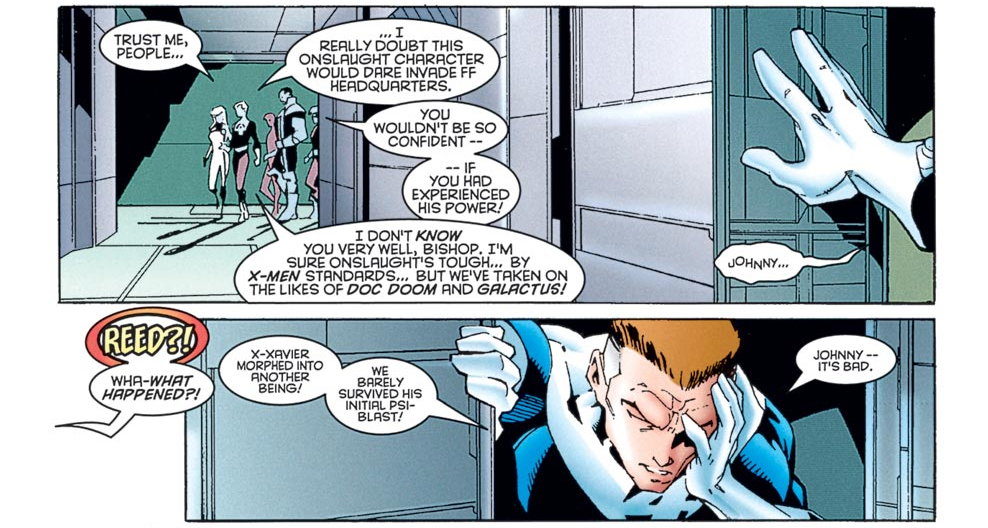 2:07:57-2:30:23: There’s no way to get around it; FF #415 and #416 are terrible ways to say goodbye to Marvel’s onetime flagship book. Gone is Paul Ryan, as well as any notion that this is actually a Fantastic Four series, because these are Onslaught crossover issues, and that means we’re reading comics that are literally designed to be middle chapters in a story about the X-Men and maybe the Avengers, at a stretch; the FF don’t get much of a look in, despite a game — if, as Jeff points out, potentially sneakily surly — Tom DeFalco, and a final issue that has both cameos from dream versions of the FF’s rogues gallery and a back-up story that is… well, just very strange and unnecessary altogether. As ways to go out, they’re shockingly underwhelming. 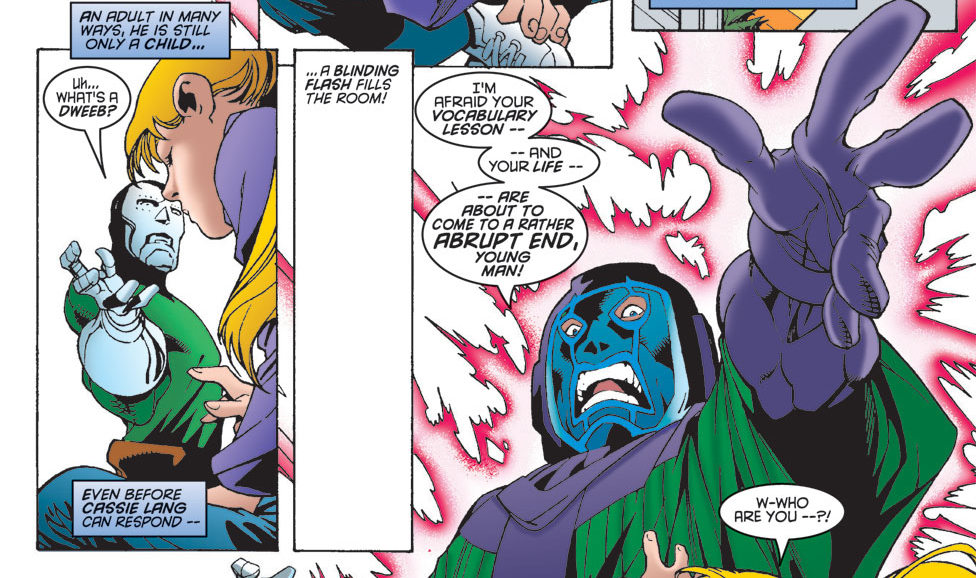 2:30:24-end: As we approach the end, we pivot to what we’ll take from the DeFalco/Ryan run, and then the Fantastic Four comic as a whole. Who was our favorite member? Our favorite writer? And will we miss the comic now that it’s done? (Clearly not enough to do the other volumes, at least, not immediately; we have a different plan, which we pointedly don’t tease nearly enough, in retrospect.) As we close up shop on the Baxter Building, it’s time to thank you all for paying attention, listening and reading along with us. As always, there’s a Tumblr, Instagram, Twitter and Patreon, but the real message for all of us is this: How the hell did both Jeff and I wish there was a Lyja and Kristoff spin-off book at the end of all of this?!? Happy holidays, all. We’ll be back in 2019 with more Wait, What?s and… something else.