Previously on Baxter Building: We are, sad to say, in the downslide of the Lee and Kirby run of the title, with the series having peaked around #48-68 or so. Since then, the series has shown flashes of its old fire while displaying less of the invention and boldness that characterized its best issues, instead relying on existing threats and recycling stories fans had already read. Sadly, that’s not going to change anytime soon… 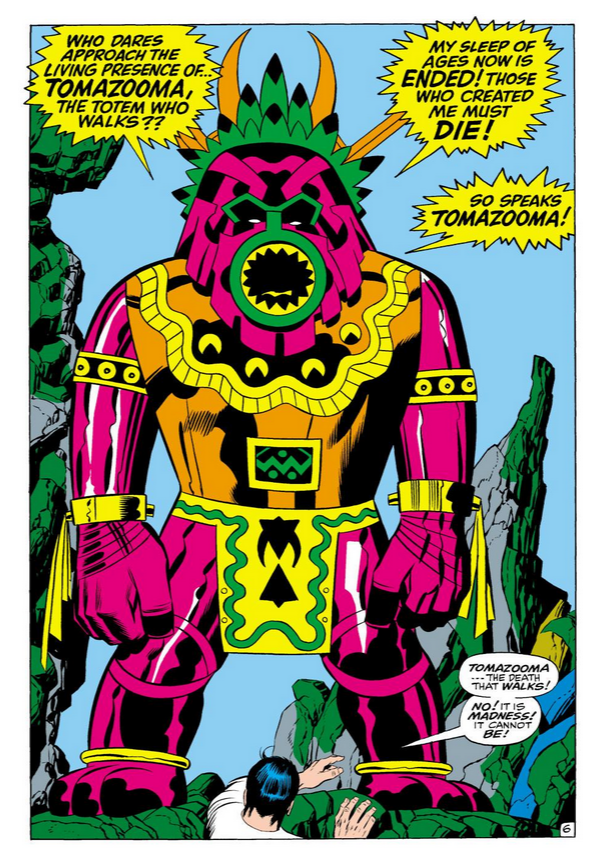 0:00:00-0:01:15: Instead of the usual cold open, I break with tradition to introduce Aaron Redfield’s alternative Baxter Building theme. That’s right: someone made us an alternate theme, you guys. It’s a beautiful thing.
0:01:16-0:06:15: It’s one of those times in which writing these notes after recording helps me tell you things like “Oh, we’re totally lying about which issues we’re going to talk about.” Despite what we say in the introduction, Jeff and I are only dealing with Fantastic Four #74-81 this time around, leaving Annual #6 to next episode for reasons of timing and Jeff not having read it. See? It all works out in the end.
0:06:16-0:10:02: In a classic Wait, What? maneuver, our discussion about the first issue is temporarily sidetracked by the painting known as White Stallion In The Moonlight by Lumen Winter, as advertised on the inside cover. But, really, who could ignore something like this? 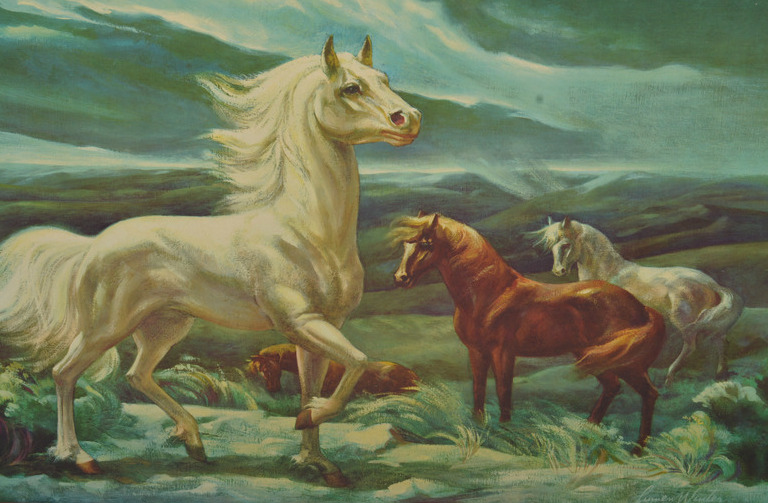 0:10:03-0:17:52: When we get to the actual contents of Fantastic Four #74, a few things stick out: Kirby’s character acting, Stan Lee’s Silver Surfer dialogue (Something that, as Jeff points out, works best in counterpoint to Kirby’s plotting, because Kirby makes sure that the Surfer is actually doing something in his stories) and the fact that Kirby and Lee are visibly fighting over whether or not heroes are allowed to be flawed, pissy characters. Can that overcome a story that feels, as we put it, like it was created “because we really couldn’t be bothered thinking up anything else”? U decide! (But the answer’s “No, not really.”)

0:17:53-0:27:10: Something else that’s notable about the issues in this run of FF: Reed Richards is inarguably the worst husband, which we discuss here (and also later; seriously, he’s terrible). Also worth noting is one of the best Galactuses Kirby ever draws, and Lee bringing his A-game when it comes to Galactus’ dialogue. Well, sometimes. Who knew Earth’s “living energy” smelled quite so good? 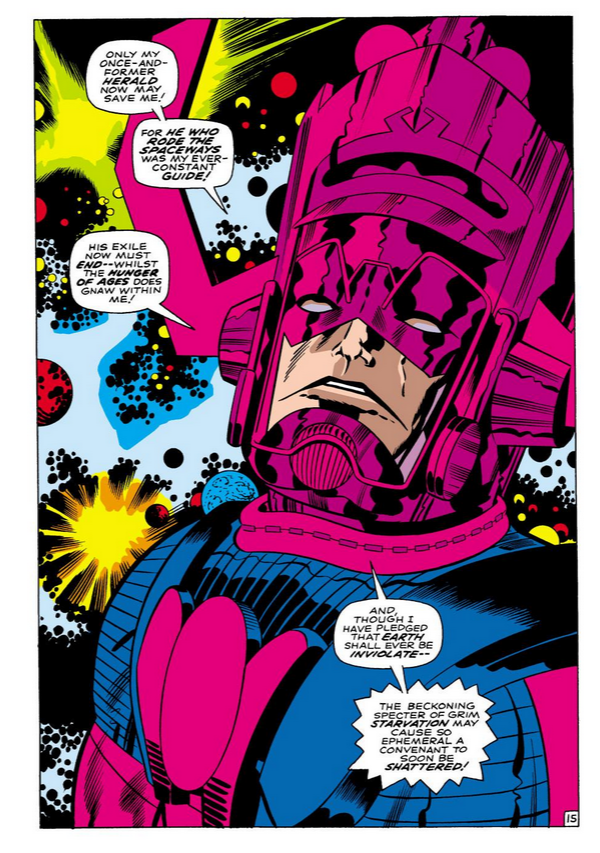 0:27:11-0:45:37: Stan Lee demonstrates that he doesn’t understand how light years work in FF #75, but he does gift us the phrase worlds within worlds. There are also a number of questions being tackled: How does the Microverse work, anyway? Why isn’t Galactus wearing pants? (Additionally: Can Kirby draw legs? The evidence would suggest otherwise.) What’s going on in the middle section of this issue, anyway? Jeff has a worthwhile theory concerning qliphoths concerning that last question, at least, although I went the Steve Englehart route, for reasons. Oh, and Reed “cosmic poops” a meteor away from Earth. Yeah, I thought that might get your attention.

0:45:38-1:01:01: Fantastic Four #76 has some great art and some of the worst writing in the entire series, although Jeff argues that that’s more Lee’s fault than Kirby’s. (He’s probably right). Also! I explain the unexpected intricacies of Portland social mores, and we meet the Industructible One — one of the two new characters in this run of issues that demonstrates just how disinterested Kirby and Lee are in the material, and especially creating memorable new characters. There’s also the least logical plot reversal in Fantastic Four history to date. In fact, I’m tempted to suggest that it’s the least logical plot reversal in all of Fantastic Four mythology. It’s that ridiculous, but it does demonstrate the value of blubbering. 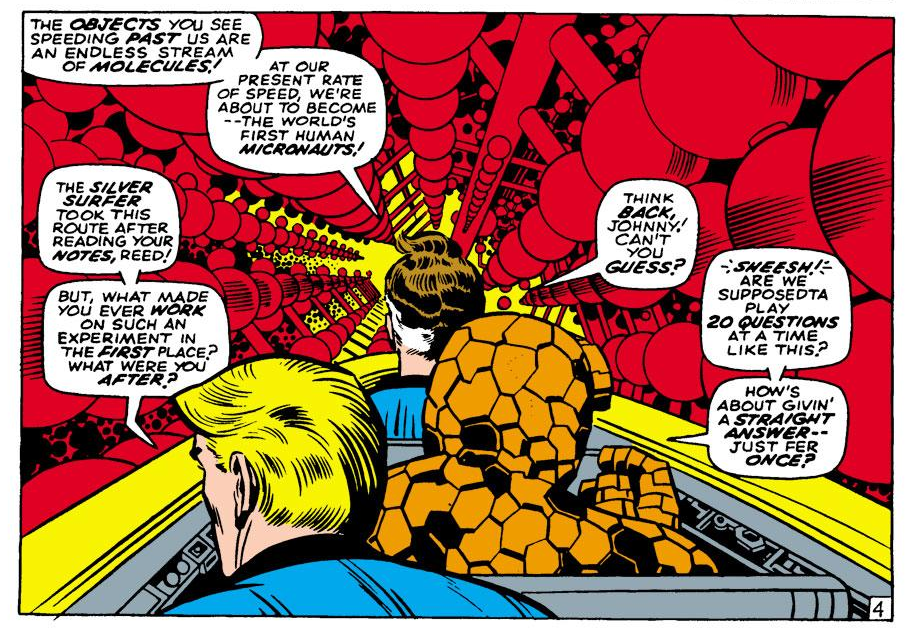 1:01:02-1:29:49: We take a detour to discuss the classical languages and my familial connection to it before we get to Fantastic Four #77 (Note: Prepare to hear the most fake Latin name ever created; I swear this is a true story, nonetheless). “The thing that is especially terrible about this issue,” says Jeff at one point, which might betray just how successful this issue actually is at reintroducing the Psycho-Man to the Marvel Universe. If it doesn’t, Jeff using Apple’s corporate strategy to illustrate why he’s a wasted villain is probably going to help considerably. Meanwhile, marvel at the amazingly underwhelming resolution to the second Galactus storyline, and join us down the rabbit hole as we wonder whether someone was redrawing Kirby for some unknown reason on one page (Spoiler: you’ll have to listen to my dumb theories about Kirby’s panel layout — and, later on, a theory about why a full-page splash is really a double-page splash missing its second page). 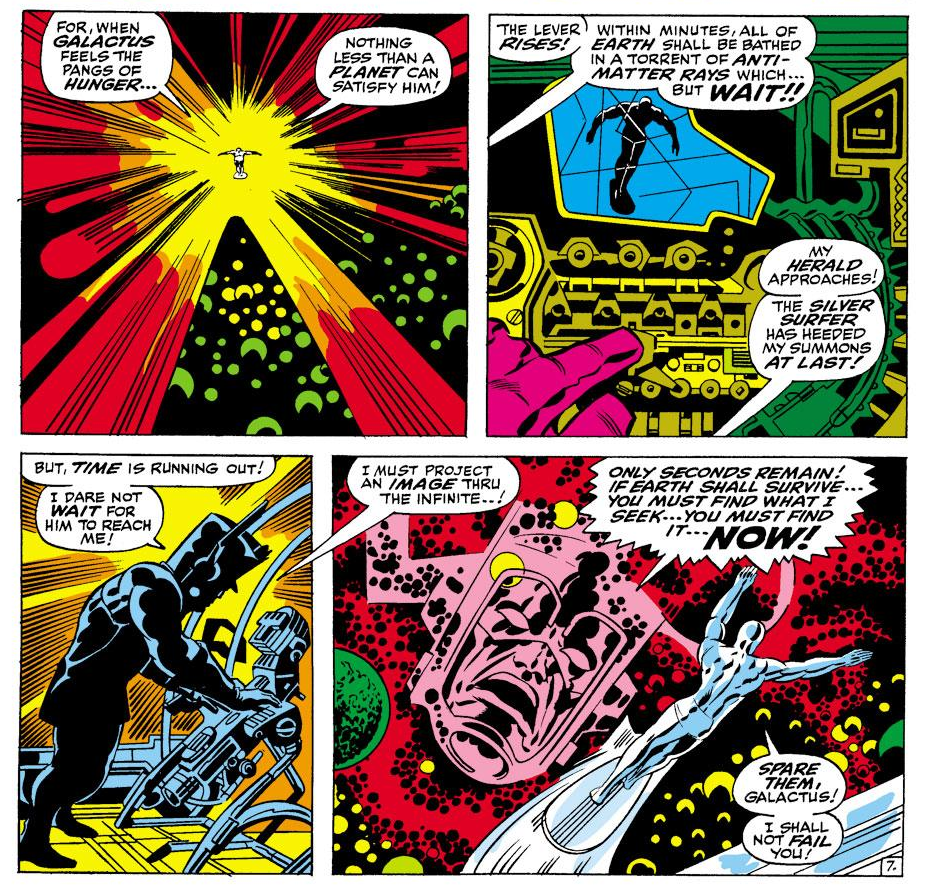 1:29:50-1:35:59: What happens when you take two of the least interesting tropes of the series so far — namely, an experiment to turn the Thing back into Ben Grimm and the team being threatened by a member of the Frightful Four working solo — and add them together? The answer might depress you, because Fantastic Four #78 is the very opposite of a winner. Is it because it’s the Wizard that’s causing trouble, with his newly created “Wonder Gloves”? Is it because we already know that the Thing isn’t really going to end up as Ben Grimm? Perhaps — but at least we get to talk about Kirby’s fascination with hands and who, if anyone, is the point of view character in the series along the way. For fans of spoonerisms, I also say that Johnny “melts a floor in the hole,” for some inexplicable reason. 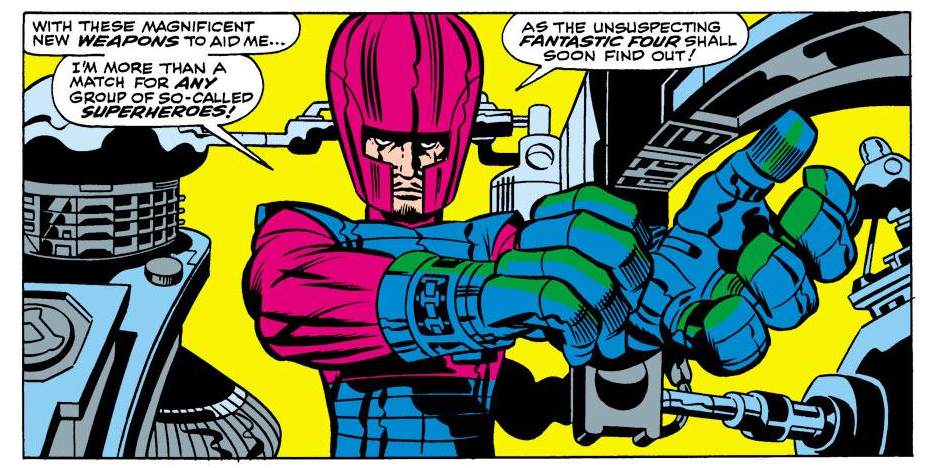 1:36:00-1:52:34: What makes Fantastic Four #79 one of the most enjoyable issues in this run? It’s not the debut of the Android Man — another in the “Eh, whatever, this will do” school of FF characters created by Lee and Kirby in the twilight years of their collaboration — but the opening scenes of the book that let the characters relax and just be themselves. Comedy with Crystal, Johnny and Ben, melodrama with Reed and Sue, it’s all there — and then everything goes to hell when the book tries to get back into that whole adventure thing. Meanwhile, Jeff tries to convince that Alicia Masters is freaky, and that Henry Rollins looks like an android. Or vice versa. We also get into the confusion surrounding what actually turns Ben Grimm back into the Thing, and also talk about another element of seeming ghosting Kirby when you least expect it, and admit the secret about this era of Fantastic Four: that the Thing’s maybe a little too into his self-pity right now.

1:52:35-2:08:12: There are few Lee/Kirby creations who have never enjoyed a comeback in later years, but Tomazooma — the death that walks! — is one of them, for a good reason; a robotic totem pole monster created by communists to scare native Americans is not the easiest of sells for modern audiences, shall we say. Yes, racial insensitivity is order of the day in FF #80, which should be great because it sees the return of Wyatt Wingfoot, who remains one of the greatest supporting characters in the series. But there’s so much not to enjoy in this issue, not entirely related to racism. Reed abandoning his pregnant wife and pretending its on the order of a doctor, for example. Face it, true believer: this one is really kind of horrible — but, as we discuss, it was so close to being great. No, really. Important edit: I say in the episode that Tomazooma never appears again, because that’s what the Internet told me at the time, but as you can see in the comments below, that’s not the case! Oh, Marvel.

2:08:13-2:11:18: While declaring that we’re going to skip Fantastic Four Annual #6 until next time, we get into a brief digression about the similarities between the Negative Zone and Sub-Atomica, and why both are necessary. (Spoilers: We might not come up with a great answer for that latter question.)
2:11:19-2:20:00: Who would’ve thought that FF #81 — which finally, finally brings Crystal into the team properly — would’ve ended up being a highlight of the episode? (Despite featuring the return of the Wizard!) Chalk it up to Lee and Kirby working in synch in a way they haven’t managed in awhile, and turning what is an internal conflict into an exciting external action piece, and the fact that maybe Crystal is actually a lot of fun in this particular era of FF-dom.

2:20:01-end: It’s the end of the podcast as we know it (Well, for this episode), as we look ahead to what we’re reading for the next Baxter Building (#82-87, and Annual #6) and I try to convince Jeff and you, dear whatnauts, that things are going to get better. If nothing else, the Annual is kind of fascinating, I promise. Until then, you can find us at our regular haunts: Tumblr, Twitter and Patreon, in addition to the three — count them! — posts that’ll appear every single week on here. There’ll also be a new Wait, What? next week, as well, because we really can’t help ourselves from spoiling you.* As always, thanks for listening.

(* Whether or not this counts as spoiling is entirely open to question, of course.)