Previously on Drokk!: We’ve made it nine years into the comic book career of Judge Dredd, and we’ve watched the character come into his own after a number of missteps, with the eventual return of co-creator John Wagner midway through his second year being the turning point. With that in mind, the prospect of tackling a collection of one-off stories from throughout that same period, originally published in annuals and special issues, sure sounds like fun, right…? 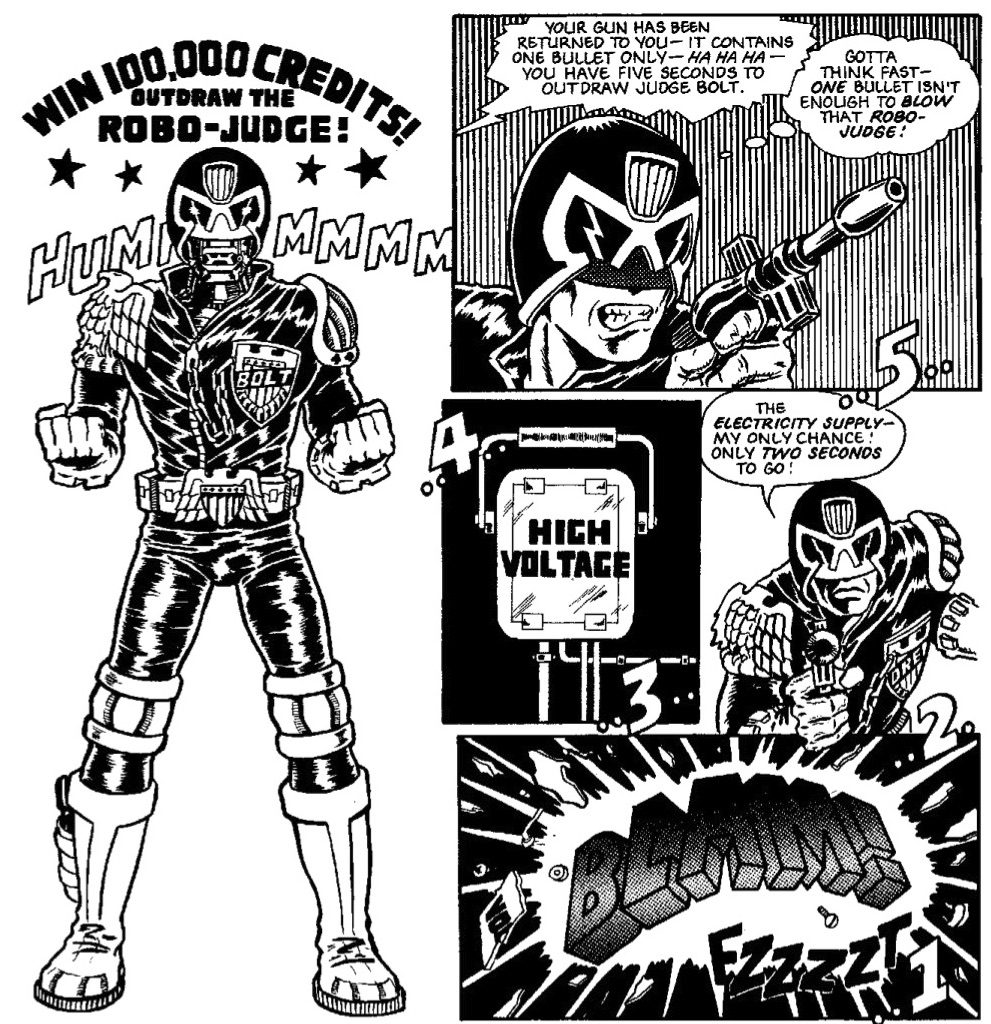 0:00:00-0:03:34: In which we briefly introduce ourselves, the intro gets away from me — note that I’m literally in the middle of a sentence when throwing it to Jeff to introduce himself, and he just runs with it — and we briefly touch upon the fact that both a dog’s breakfast and a dog’s bollocks are somehow noteworthy, but not as the layman might expect. More importantly, we talk about the fact that neither of us really liked the volume we’re talking about this episode, Judge Dredd: The Restricted Files Vol. 1. It’s… not good. 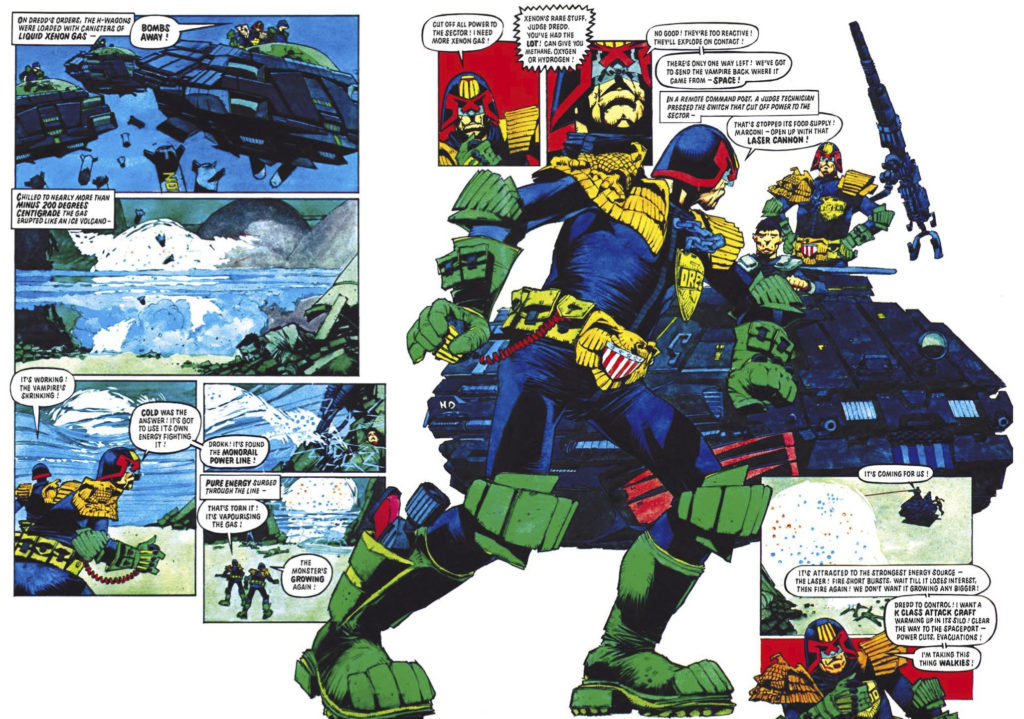 0:03:35-0:11:04: Stumbling into a discussion about the book, we talk about the unevenness of the book, especially as it relates to the (high) quality of the artwork versus the not-so-high quality of the writing. Are stories intended for annuals and specials by their very nature underwhelming, even if they’re written to be (as Jeff puts it), “visually big”? We also talk about how long it takes to get to the good stories, and our different ideas of what that actually means. (Spoilers: Jeff is far more forgiving of early Alan Grant than I am.) 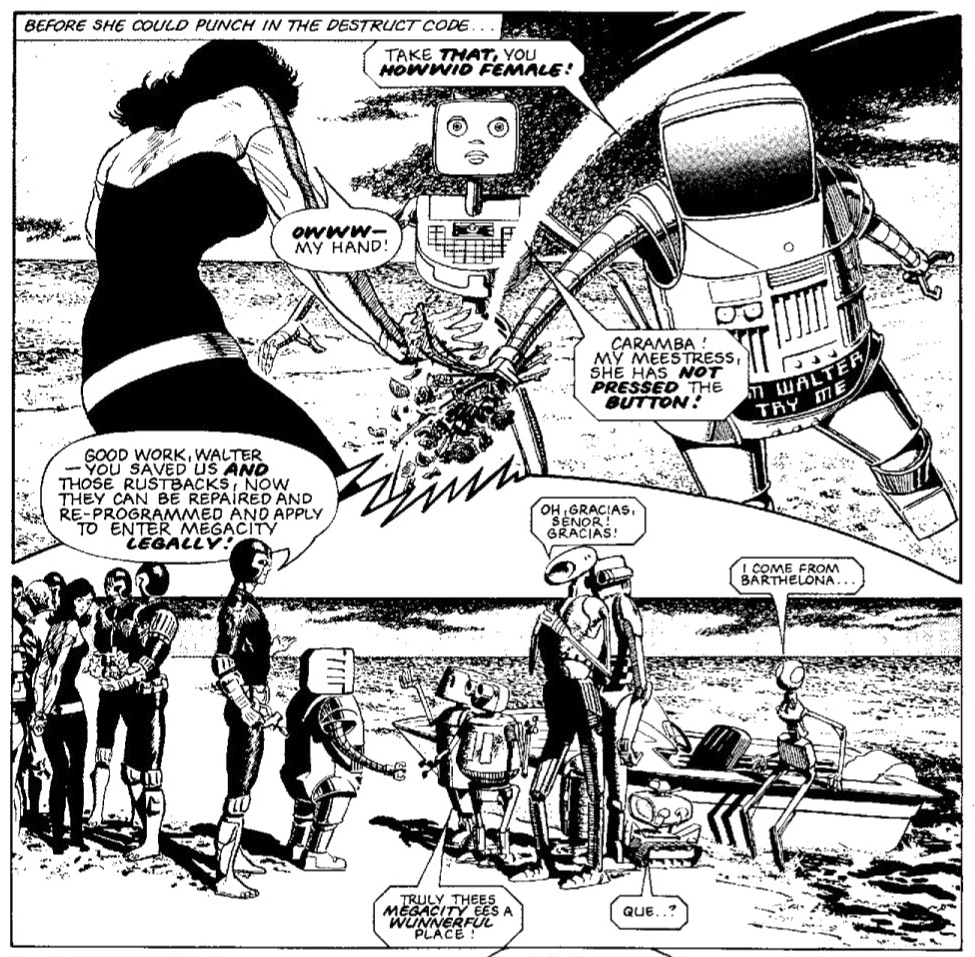 0:11:05-0:17:37: Perhaps a little later than would be useful, I give a little bit more context about 2000 AD annuals in general, and their prospective audience and purpose, before we talk about the appalling casual racism on show in one of the stories — really, it’s astonishing — and whether or not “Pinboing Wizard” is the first actually enjoyable story in the volume — “only” twelve stories into the book itself. 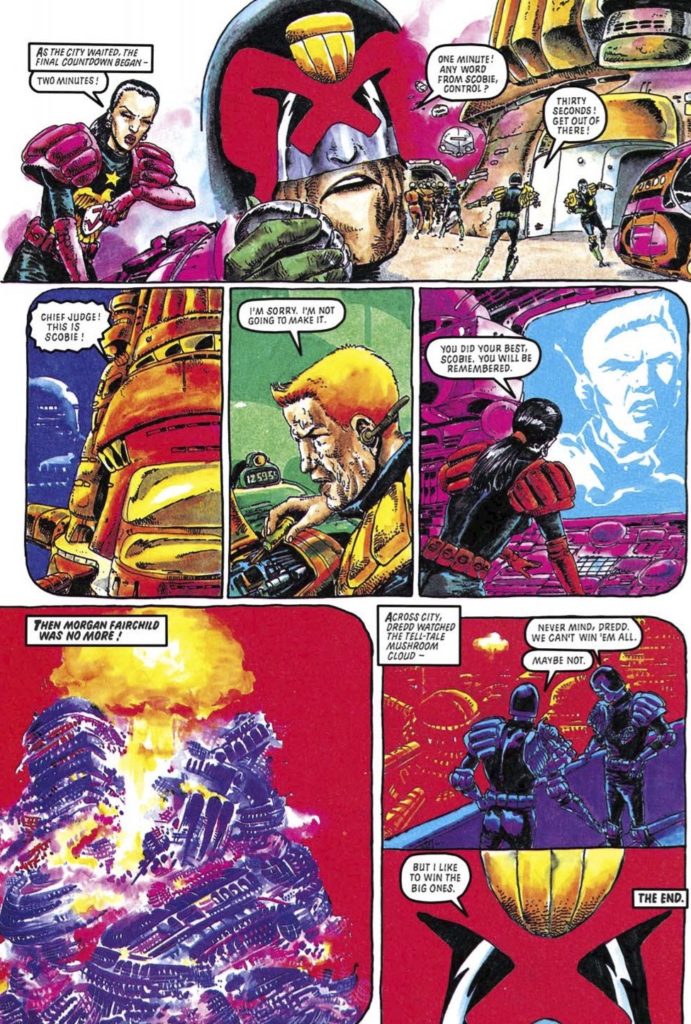 0:17:38-0:30:47: If annuals and specials were intended to act as introductions to the characters, then surely a collection of those stories would be a great introductory volume for a new reader, right…? Well, not exactly, and we start to break down quite why that might be the case. Is there a lack of nuance in these stories, or simply a lack of darkness? It’s surely no coincidence that the stories Jeff and I enjoy most in the volume are the more downbeat ones, and the moments in the comedy stories are the more… grim jokes… 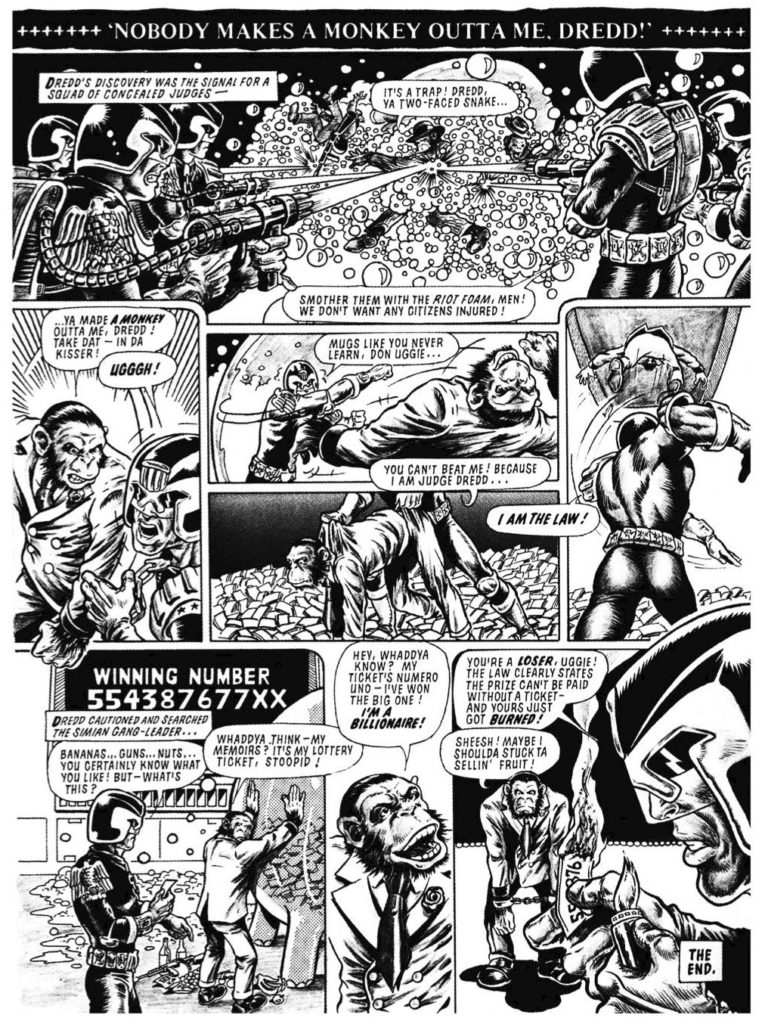 0:30:48-0:42:25: We take a brief diversion from the meat of the volume to talk about the Strontium Dog strip in 2000 AD — also created by John Wagner and Carlos Ezquerra, with Alan Grant co-writing the majority of the stories — which, for me, heavily influences some of the more supernatural stories in this volume. Also discussed: My odd head canon concerning the limits of Dredd as a strip, Jeff seeing an influence on Simon Bisley from the stories contained in this book, and “William Nilly”’s success as a pseudonym. 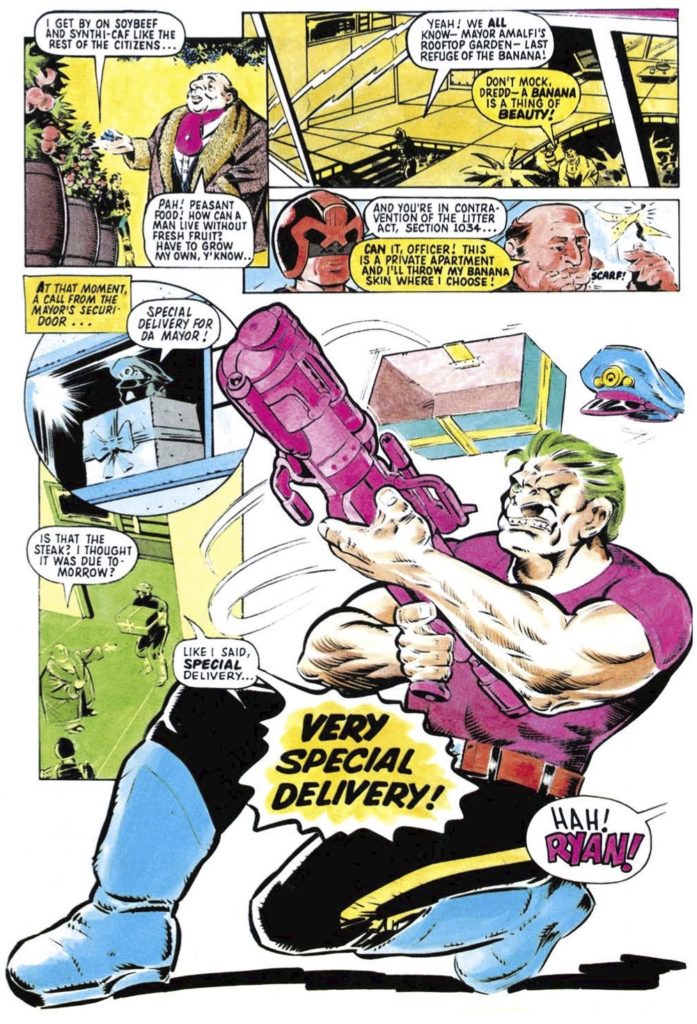 0:42:26-0:49:06: We return to the idea that the value in this volume is almost entirely in enjoying the visual stylings rather than the writing, talking about the ways in which the off-model early stories have a lot of things to enjoy in them, at least in how they look, such as Kevin O’Neill drawing in what looks like a quasi-early McMahon style for a couple of stories, or a wonderfully pop-art Brett Ewins/Brendan McCarthy collaboration. 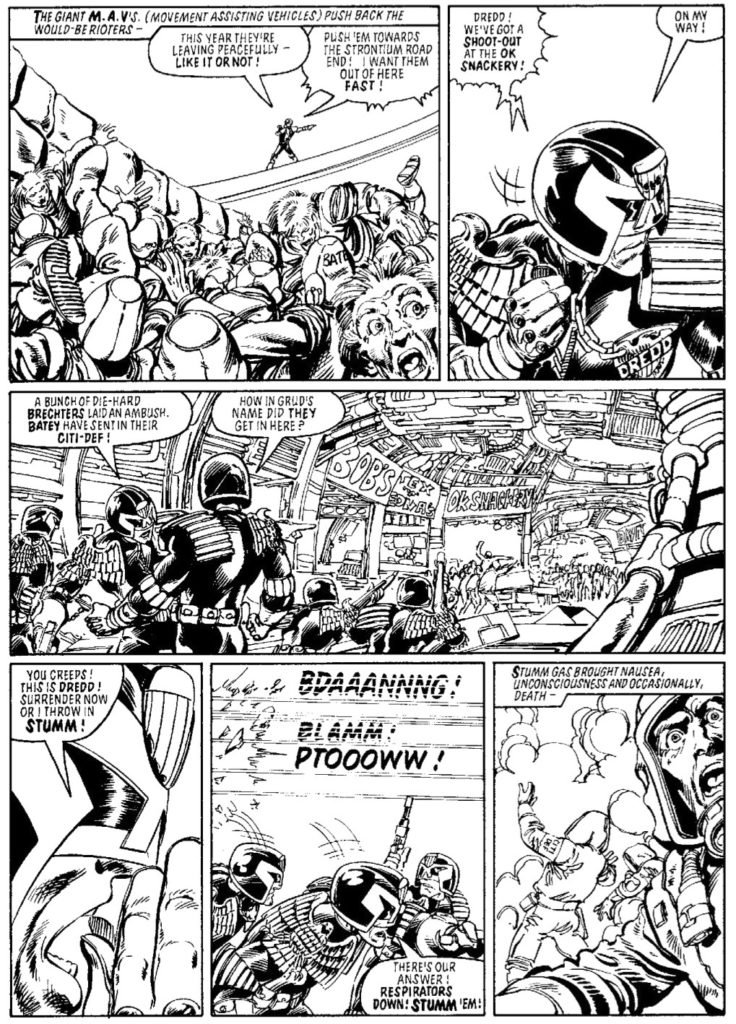 0:49:07:-1:13:05: Can everyone take a moment to enjoy the fact that Jeff and I take quite so long discussing one 14-page story, purely because we cannot get over quite how bad the John Byrne artwork for it actually is? And, oh, friends; it’s very bad artwork indeed, all the worse for being presented next to some truly great stuff from the likes of Brian Bolland, Mike McMahon and Ian Gibson. I mean, just take a look. 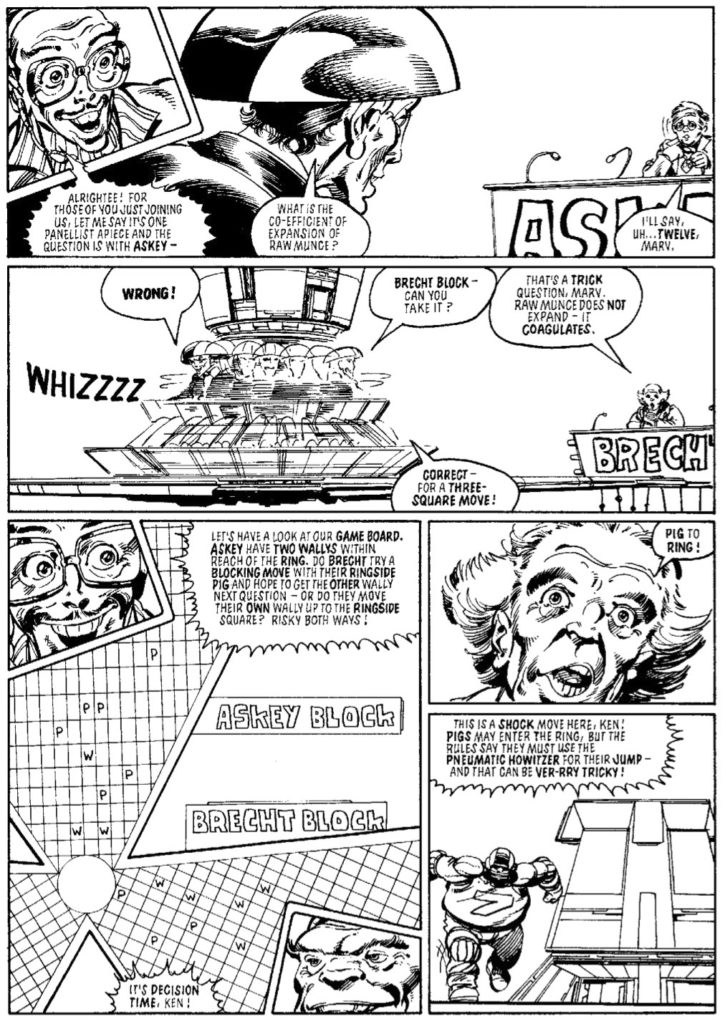 This was when he was being considered one of the finest artists in the American comic book industry. Just think about that. 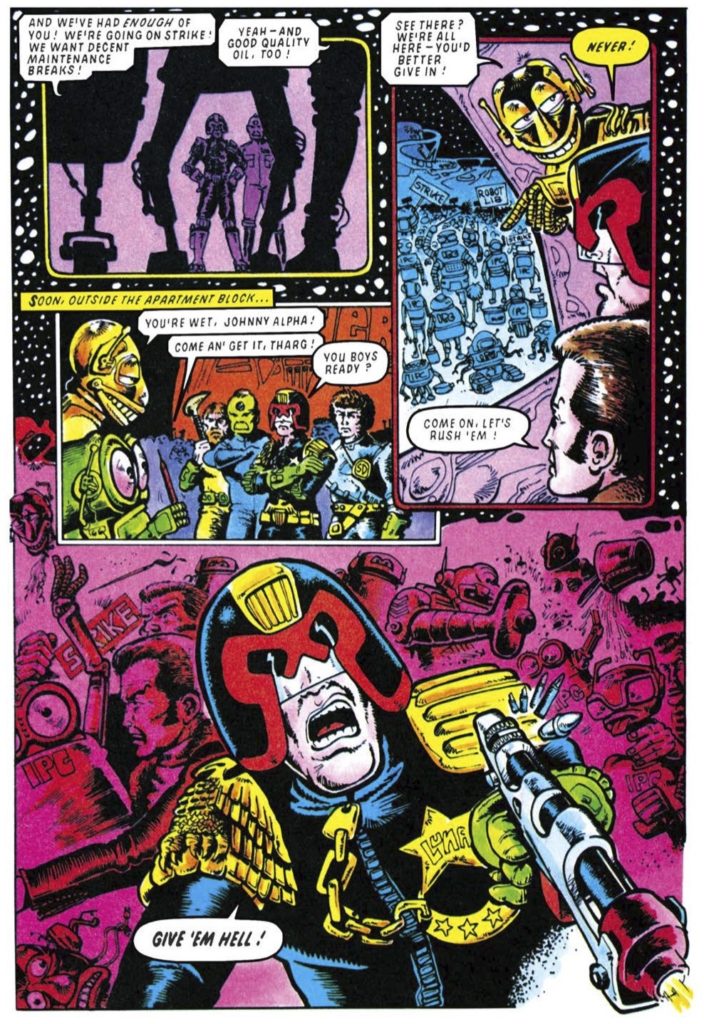 1:13:06-1:23:46: Jeff is clearly trying to wrap things up early, but I won’t let him; instead, we end up talking about how surreal the story from the Dan Dare annual is. It’s so off-model that it reads like a parody that accidentally got published, but it’s also one of the meanest parodies you can imagine, making everyone depicted — and involved — seem a little worse by comparison. Of course, we come up with some conspiracy theories about the story’s creation and just who was actually behind it, because it’s us. 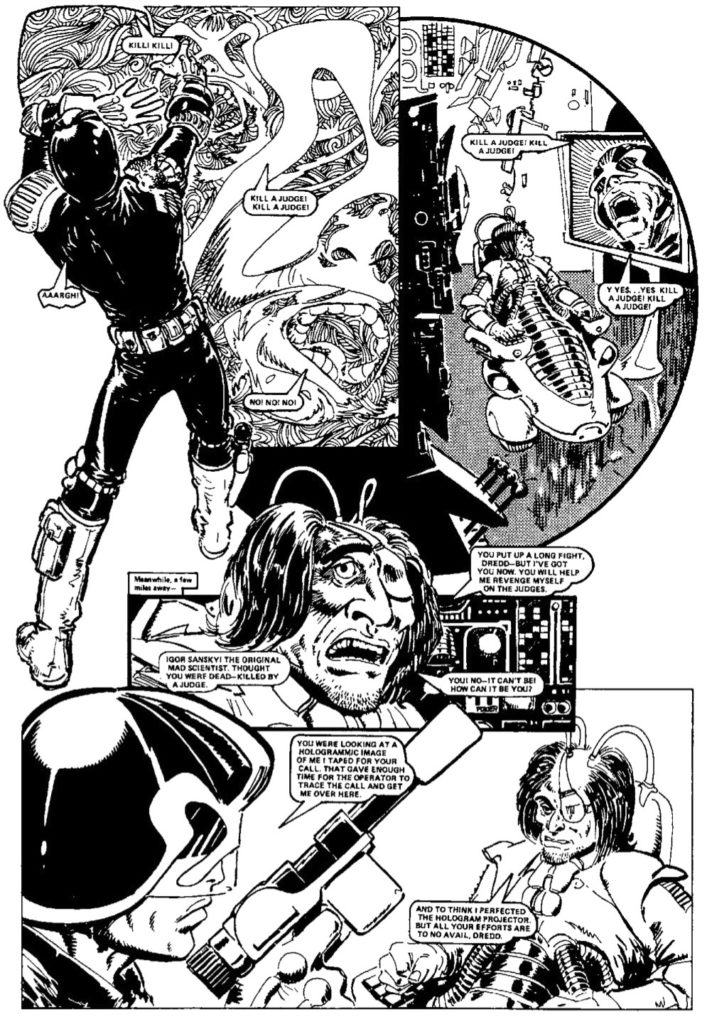 1:23:47-1:34:21: If this is, as we describe it, a book for completists only, then what kind of completist? (An art-lover, if nothing else.) Do we think that because we’ve been spoiled by “better” Dredd in earlier Case Files volumes, or is this genuinely lacking — and if so, is that the case because these stories exist outside the context in which they were originally published? All of that gets brought up, if not necessarily resolved, here! 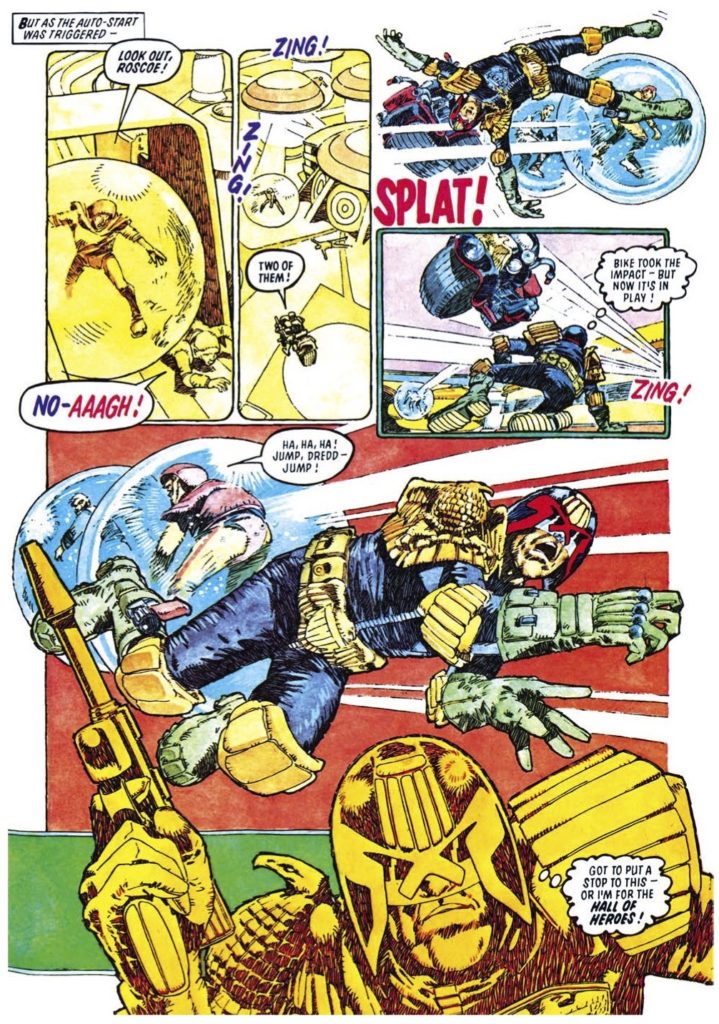 1:34:22-end: We have a long, meandering trail towards the end by talking about the inherent flaws of the annual as a narrative chapter in an ongoing story, talk more about just how disappointing this volume is, and then finally wrap things up by talking about the Twitter, Tumblr, Instagram and Patreon of it all. Next month, we get back to the Case Files proper with the 10th volume, and let me just tell you, Jeff and I are very much looking forward to it, thank you very much. And while I’m thanking you, thank you for reading through all these show notes, as ever.