Previously on Drokk!: Mega-City One has been invaded by Dune Sharks — something that seemed a little out of the blue in the last volume of the Case Files, but will have big repercussions this time out. Meanwhile, John Wagner has settled firmly back into being lead writer on 2000 AD’s Dredd, but the Magazine’s revolving line-up of writers is continuing to struggle in finding the right tone… 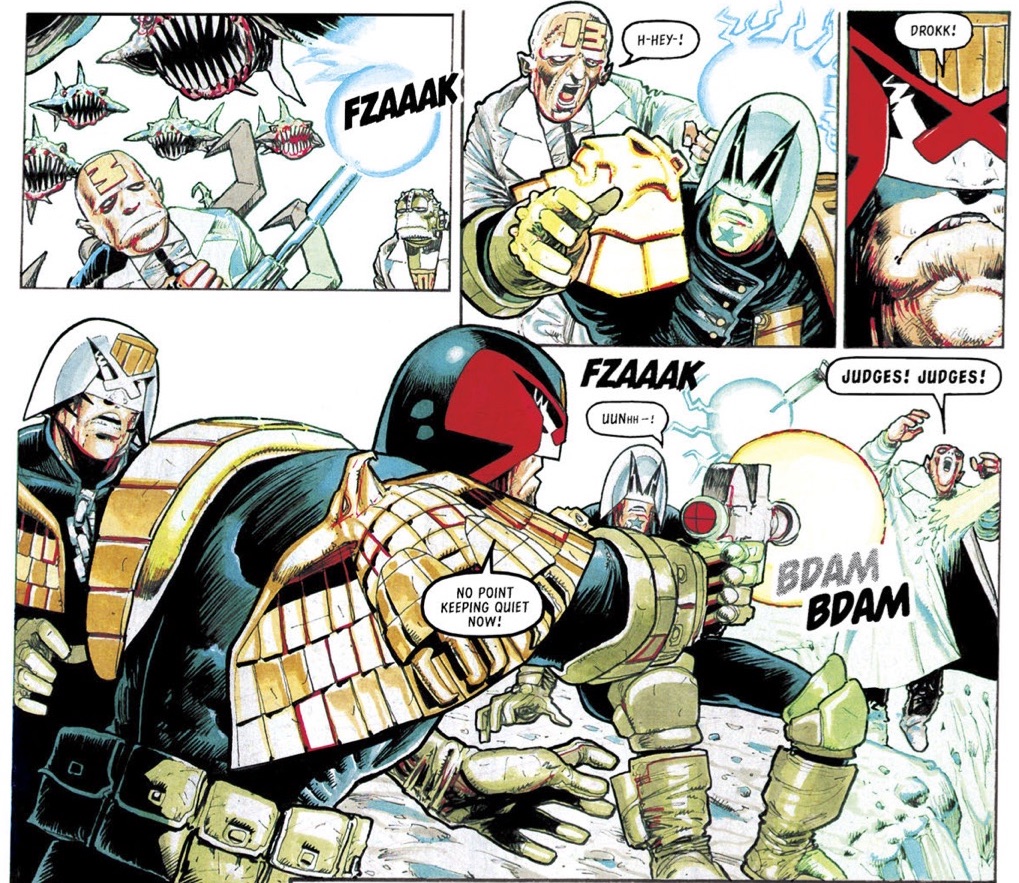 0:02:32-0:48:08: Almost immediately, we start talking about the extended storyline that takes up the majority of the 2000 AD episodes, in which Dredd, Demarco and a bunch of cadets go hunting for the origins of the Dune Sharks from the last volume; it’s a storyline that changes the way I look at Dredd as an extended comic strip, and maybe not in a manner that’s necessarily logical; Jeff doesn’t quite agree with my viewpoint, and we talk about that, as well as about the extended storyline as a whole, and what it owes to previous Dredd stories — in particular, “The Judge Child Quest,” “The Cursed Earth,” and “Wilderlands.” (Another unexpected echo that we discuss briefly? 1960s Star Trek.) 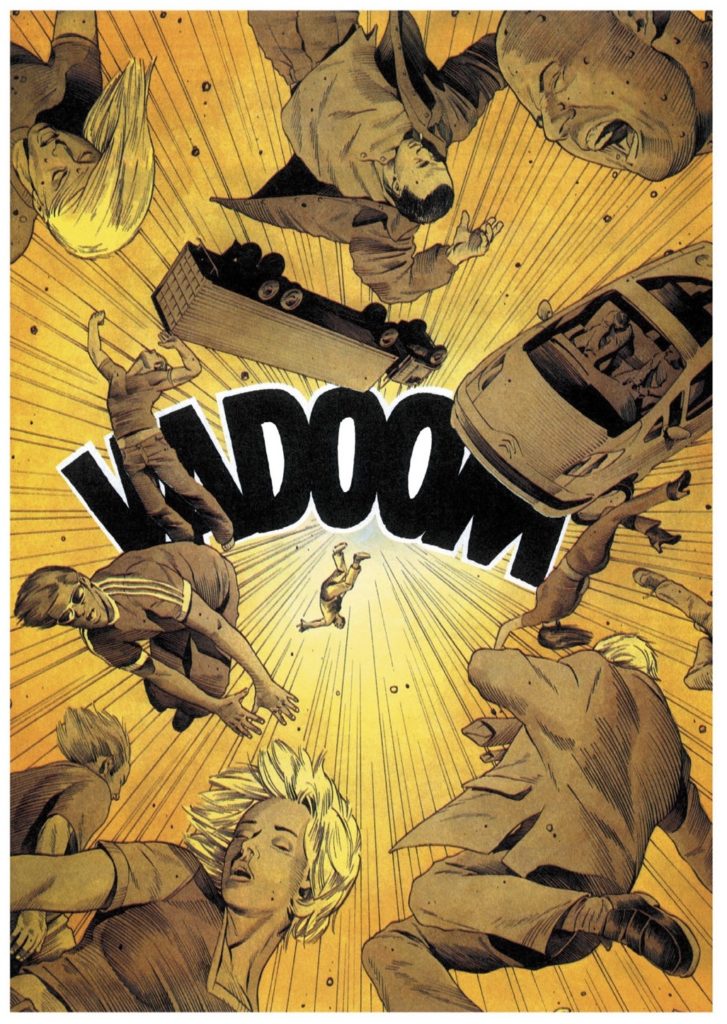 We also talk about the ways in which this extended story fails, whether it’s in the unexpected plot hole lampshades seemingly needlessly by a revelation in the story’s climactic arc — one that makes things “practically Chris Claremont-esque,” according to Jeff — or the meandering nature of each individual serial inside the larger story… something not exactly helped by some unfortunate art choices. (Who knew nuclear apocalypse could be so underwhelming?) As we talk about art, I explain my love of Henry Flint, which is likely going to be a recurring theme now that he’s shown up as a semi-regular on the strip. All this and Jeff’s food analogy for reading this book! 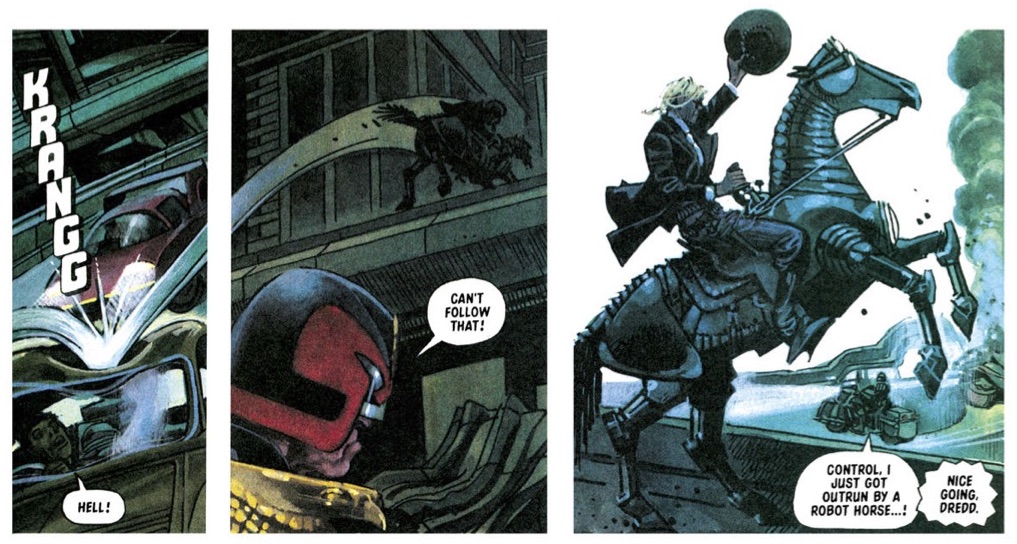 0:48:09-1:11:35: It’s not all hunting after Dune Sharks, though; there are a handful of other 2000 AD stories in this volume, and we go through them quickly: “Mad City” is a trifle, but distinguished by a strange Chris Evans (no, not the Marvel actor, this one) connection and some lovely art from Greg Staples, whom we both enjoy; “The Big Hit” is Mark Millar, and therefore terrible; “Lonesome Dave” manages to transcend the pun at the heart of the title thanks to some great John Burns art; and “He Came From Outer Space” has a great opener but otherwise disappoints. We also talk about the value of Dredd that’s just fine (Wagner’s “phoning it is… better than when some of the new guys are trying to bust their ass,” as Jeff puts it), as well as the effect that every episode of Drokk! has on me — and why Jeff should start reading the Case Files a little earlier each month.

1:11:36-1:22:15: If 2000 AD’s Dredd is in reasonably strong shape, the same can’t really be said for the Magazine; as we rush through the majority of the stories there, we sound admittedly pretty dismissive, but I’d argue that we’re being entirely fair. Could the problem be the Meg itself, we ask? 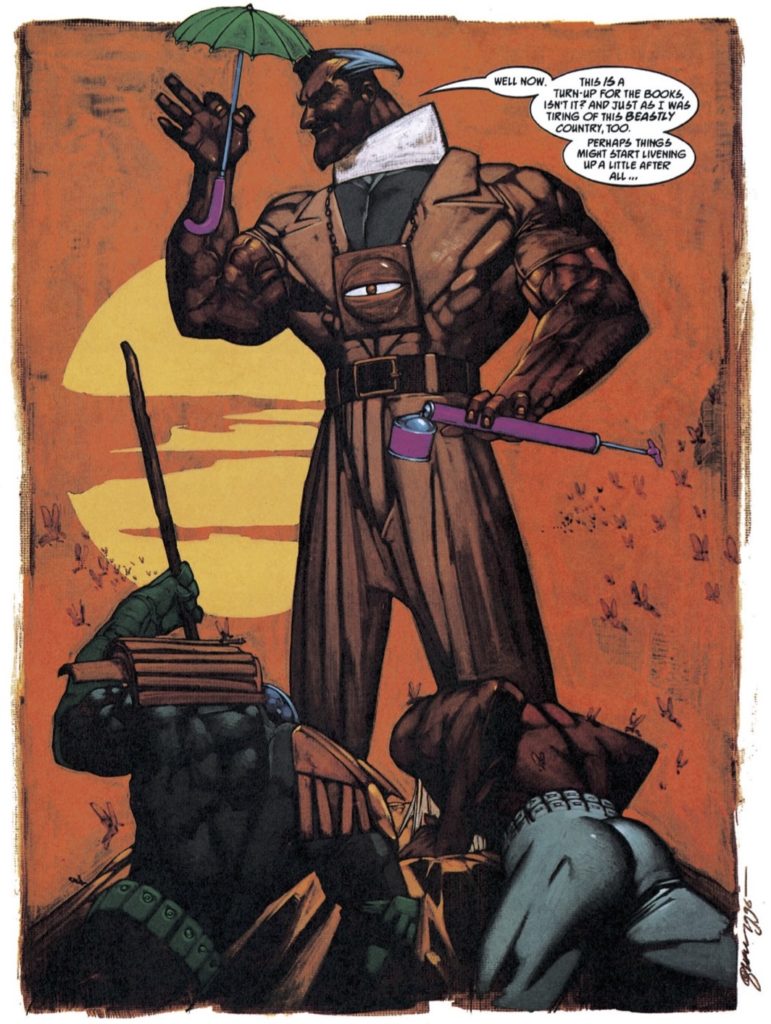 1:22:16-1:52:10: Understandably, we spend a lot of time talking about “Fetish,” the second-longest arc in the book, and the major contribution from the Magazine, as John Smith and Siku team up to create something that’s part-impressive, and part-racist mess. Despite the problems with Siku’s atmospheric-but-lacking-clarity paintings and John Smith’s lyrical-but-“Simba-City”-what-the-fuck-is-that writing — if you think that’s bad, wait until you hear us discuss the closing caption — there are things to appreciate in this near-Mega-epic, not least of which the appearance of Devlin Waugh, who steals the show despite not actually accomplishing anything on a plot level. It’s Jeff’s introduction to the character, and we talk about that briefly, as well as a short discussion about double page spreads and whether or not the (many!) in this storyline are successful. 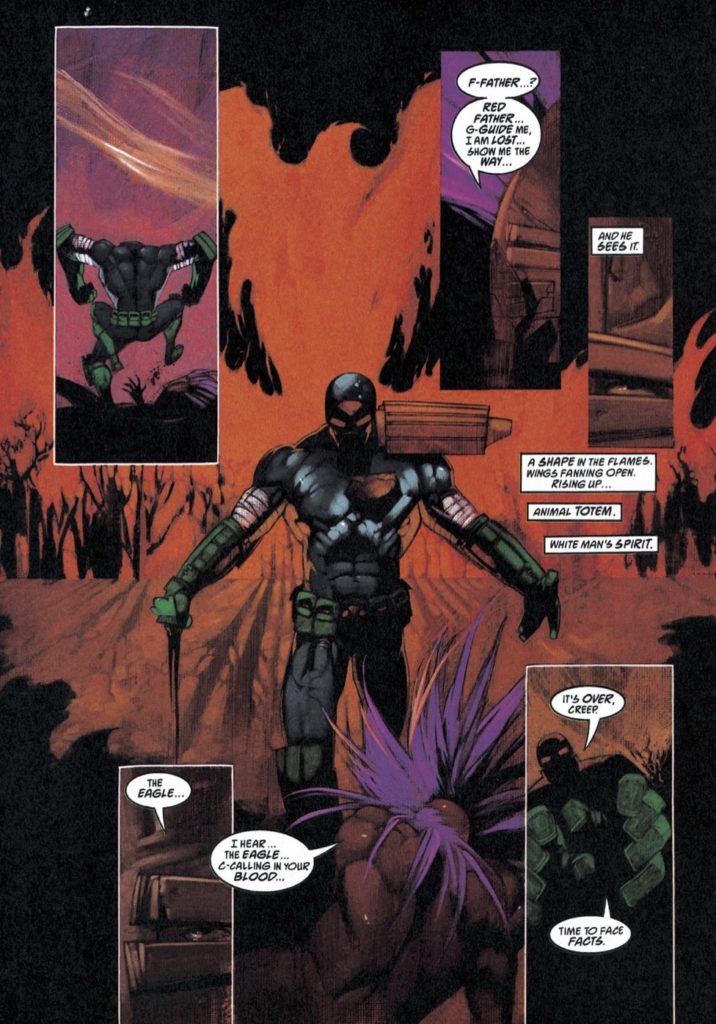 1:52:11-end: It’s time for that question again: Drokk or Dross? We both plump for the former, and choose our favorite stories — Jeff goes for “Fetish,” and I kind of hedge my bets between “Lonesome Dave,” “Dance of the Spider Queen,” and “Trail of the Man-Eaters,” but what do you expect from someone who was also convinced we’d been recording for 30 minutes or so longer than we actually had? (In my defense, there were technical issues that threw me off.) While talking about our least favorite stories, we also ask a question that I think had been circling all episode: Is 1990s Judge Dredd the most racist yet, and if so, why? 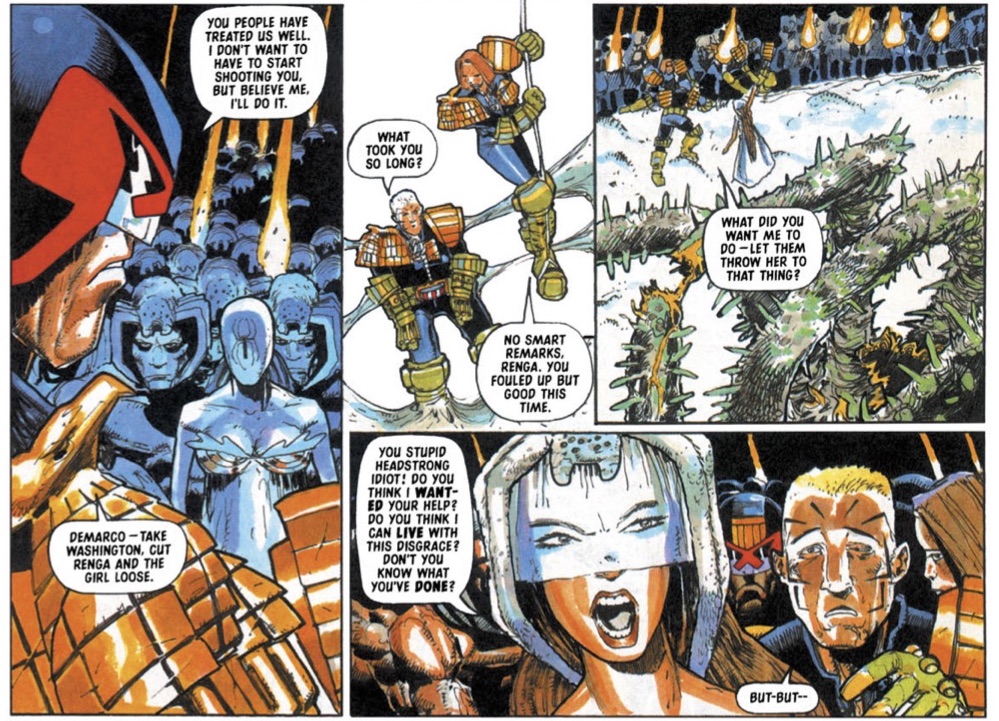 After that, it’s time to wrap things up, look ahead to the next episode, and tell everyone about our Twitter, Instragram — even though I got the URL wrong; it’s waitwhatpod, not waitwhatpodcast — and Patreon. As always, thank you for listening and reading!