Previously on Drokk!: If there’s one thing that we’ve learned in the last couple of episodes of Drokk!, it’s that the 1990s was a strange time for Judge Dredd as a strip, but that things seemed to be on the upswing the more involved co-creator John Wagner got. If we learned two things, it’s that Wagner had a strange fascination with Bill Clinton, but go and listen to last month’s episode for more on that. 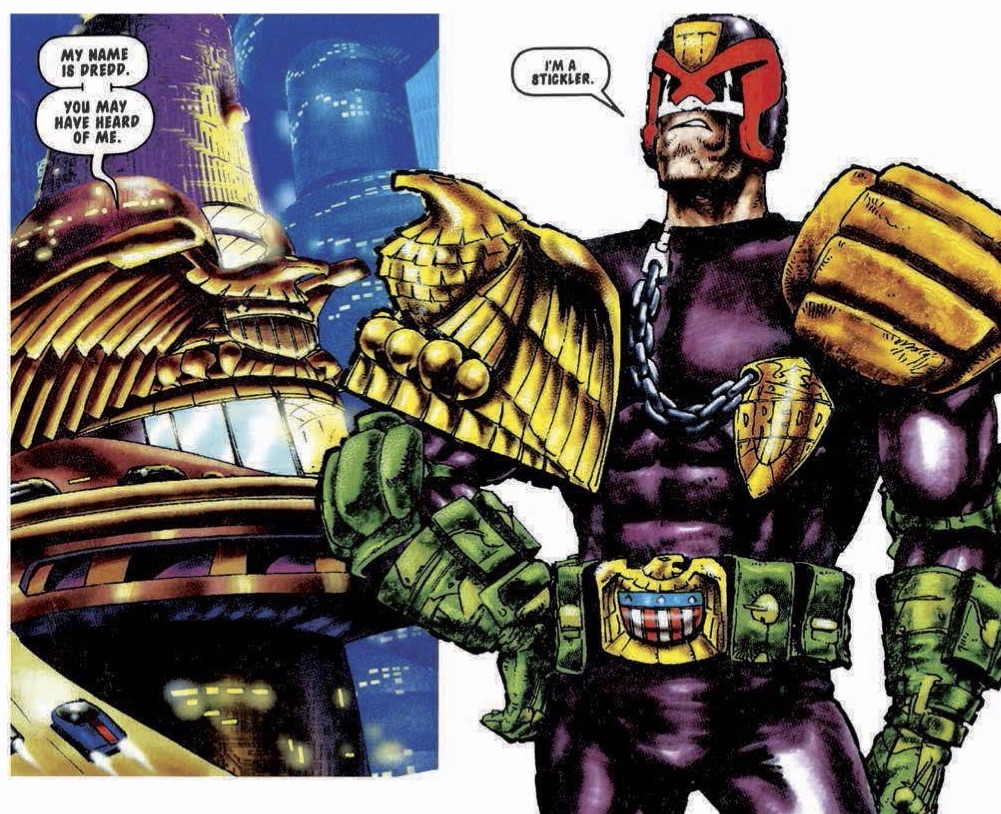 0:00:00-0:02:41: We’re going back literally 25 years for this month’s episode, with Judge Dredd: The Complete Case Files Vol. 24 offering material from a lot of different people dating back to 1995 and 1996 — and offering two different ways in which John Wagner tries to break the formula of the strip in particularly entertaining ways. (Also, the audio on my side is a bit odd this episode, but we’re coming from Verity Lambert Block, in case it’s not too clear.) 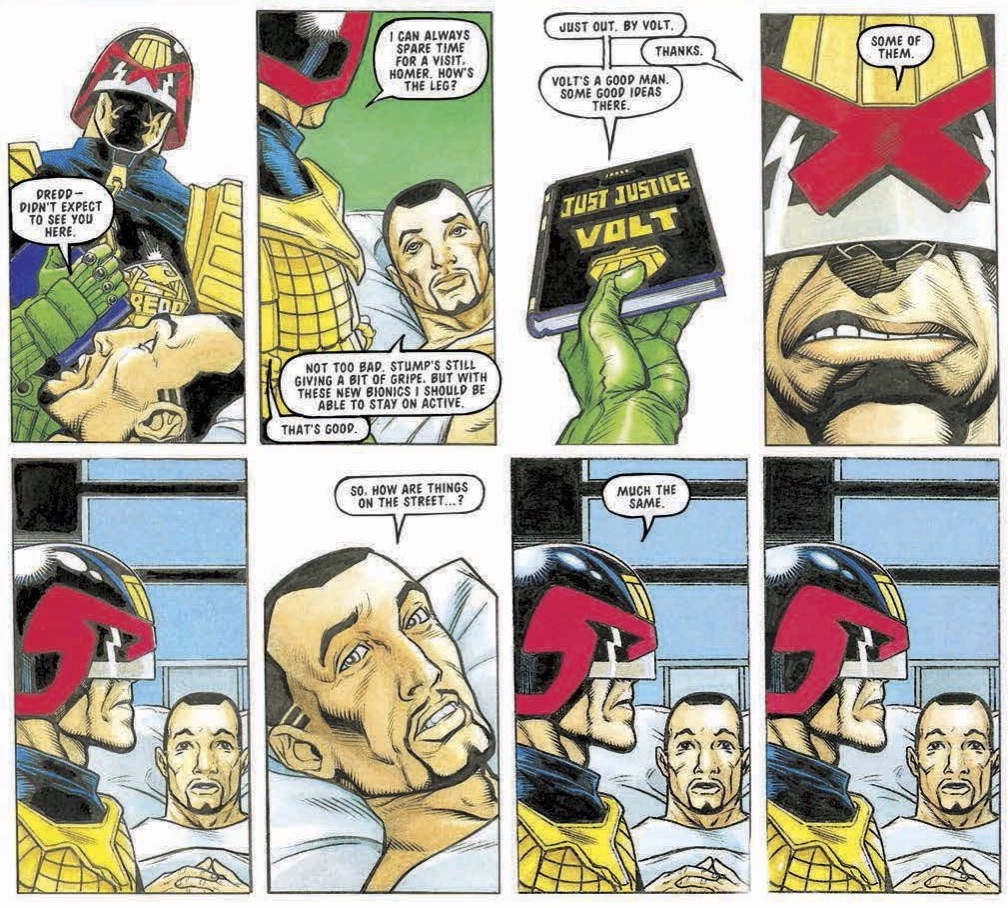 0:02:42-0:14:04: As is our tradition, we start off by talking about things that we didn’t particularly like about the volume, as we discuss whether or not the sheer competency of the material on display here — even the weaker stories — make this a surprisingly dull book, with the Judge Dredd Magazine strips in particular feeling disappointing. Is it just me? Jeff seems to like them well enough, after all, although that might be because he’s high when he’s reading… 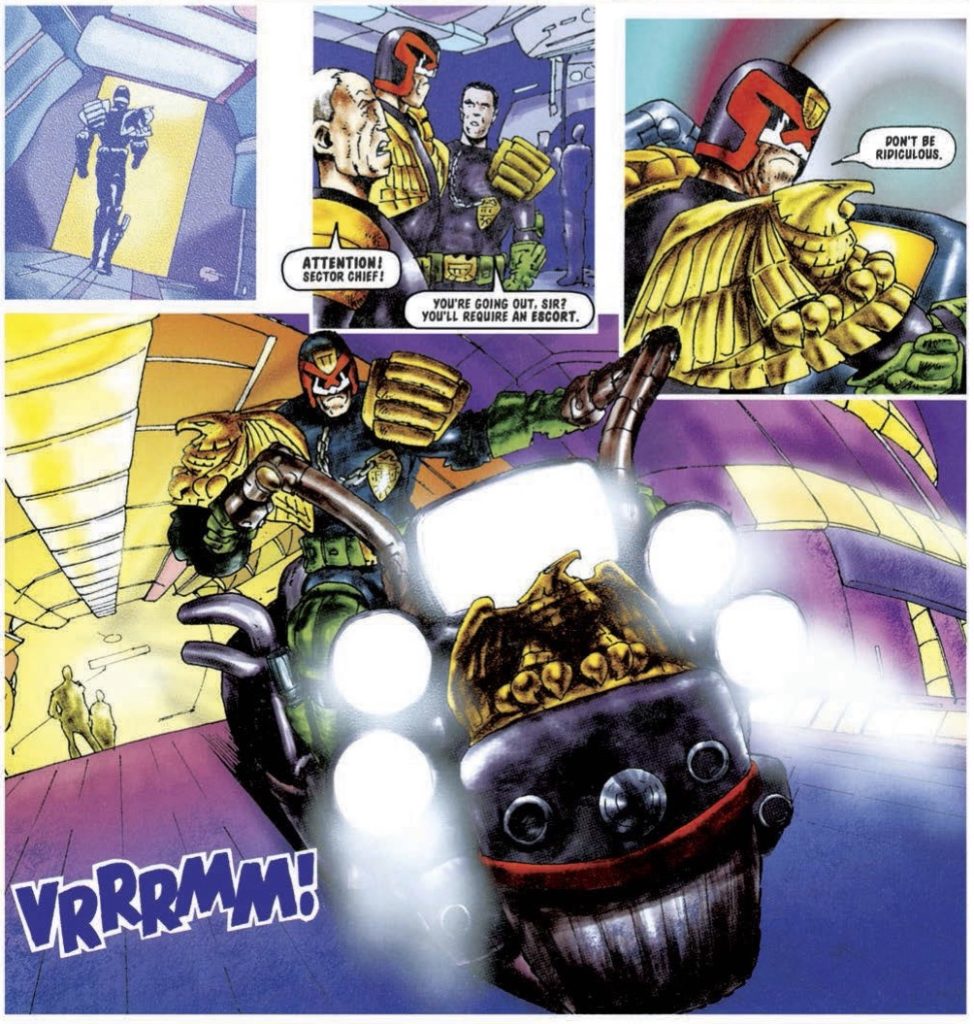 0:14:05-0:22:27: Earlier than intended, we just naturally fall into talking about “The Pit,” the longest of the stories in this book, and a sneaky soft reboot of the strip, to boot. What TV show is Wagner referencing, if at all? How does it underscore the strangeness at the heart of Dredd as a character? And, really, isn’t it great? (The answer to that last bit, at least, is “yes.”)

0:22:28-0:31:01: With Wagner offering up such strong work in “The Pit,” does that negatively impact everything around it? We talk about the possibility that the other stories aren’t necessarily bad, but simply pale in comparison to what Wagner’s doing. That doesn’t excuse Pat Mills’ contribution to the volume, which seems confusing on the very face of it — sure, “Hammerstein” has a Judge Dredd logo on it, but it’s most definitely not a Judge Dredd story. (Fans of the ABC Warriors, though, might be happy enough to see it.) 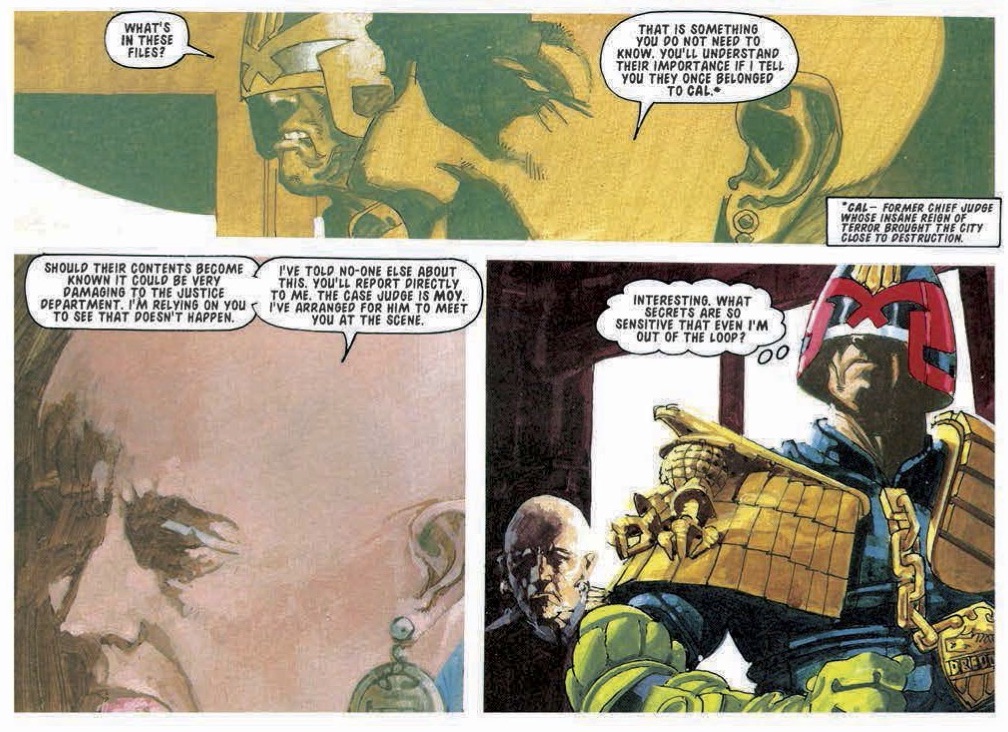 0:31:02-0:46:21: We barrel through stories, touching on “The Cal Files,” Wagner’s other significant contribution — and a really good storyline we could have spent more time on — as well as Mark Millar and Steve Yeowell’s beautifully-illustrated-but-trash-really “The Man Who Broke The Law,” the idea of a story being good for a particular creator but otherwise objectively shitty, and what Dan Abnett gets right in his sole contribution to the book that others fail at. Spoilers: it’s not just that he’s telling a Will Eisner Spirit story, despite my obsession with that strip as a model for good Dredd. 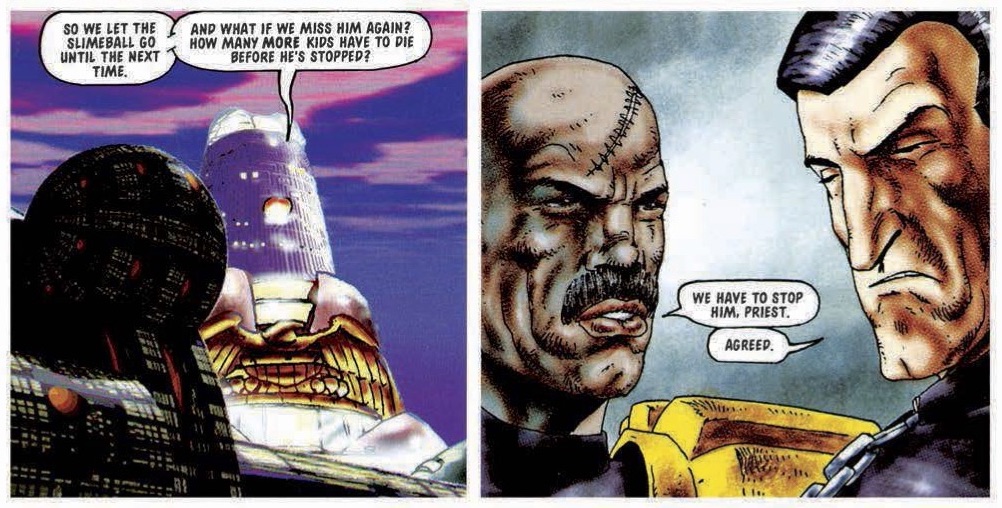 0:46:22-0:58:50: We head back into “The Pit” to talk about the way in which it is that rare thing: A Dredd strip that decentralizes Dredd and offers other characters the chance to have lives and relationships that don’t revolve entirely around ol’ stoney face. It is, as Jeff describes it, a serial that is full of “police drama-ness,” which feels surprisingly novel for a comic strip almost two decades into its existence that, in theory, is all about a policeman. Which leads us to talk about… 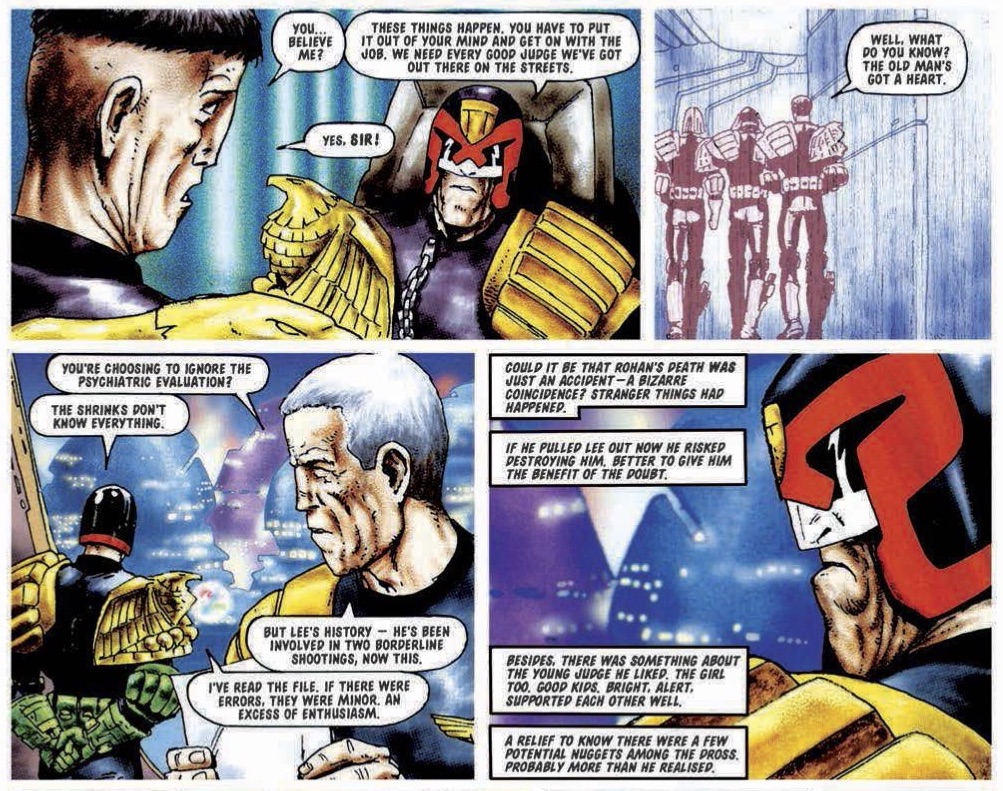 0:58:51-1:15:26: …the idea that John Wagner uses his two primary stories here to find new things to say about policing, as seen through the prism of Mega-City One, and what it means that Wagner continues to try and evolve the strip even as other writers are still trying to grapple with a formula he established years ago. Also discussed: Is Wagner like Jack Kirby, and if so, in what ways? Is “The Cal Files” the beginning of a reappraisal of an idea seemingly abandoned after “Mechanismo”? Was there a rethink at 2000 AD editorial about the different purposes of 2000 AD and the Magazine, in terms of what each individual series brings to the table that is Dredd? 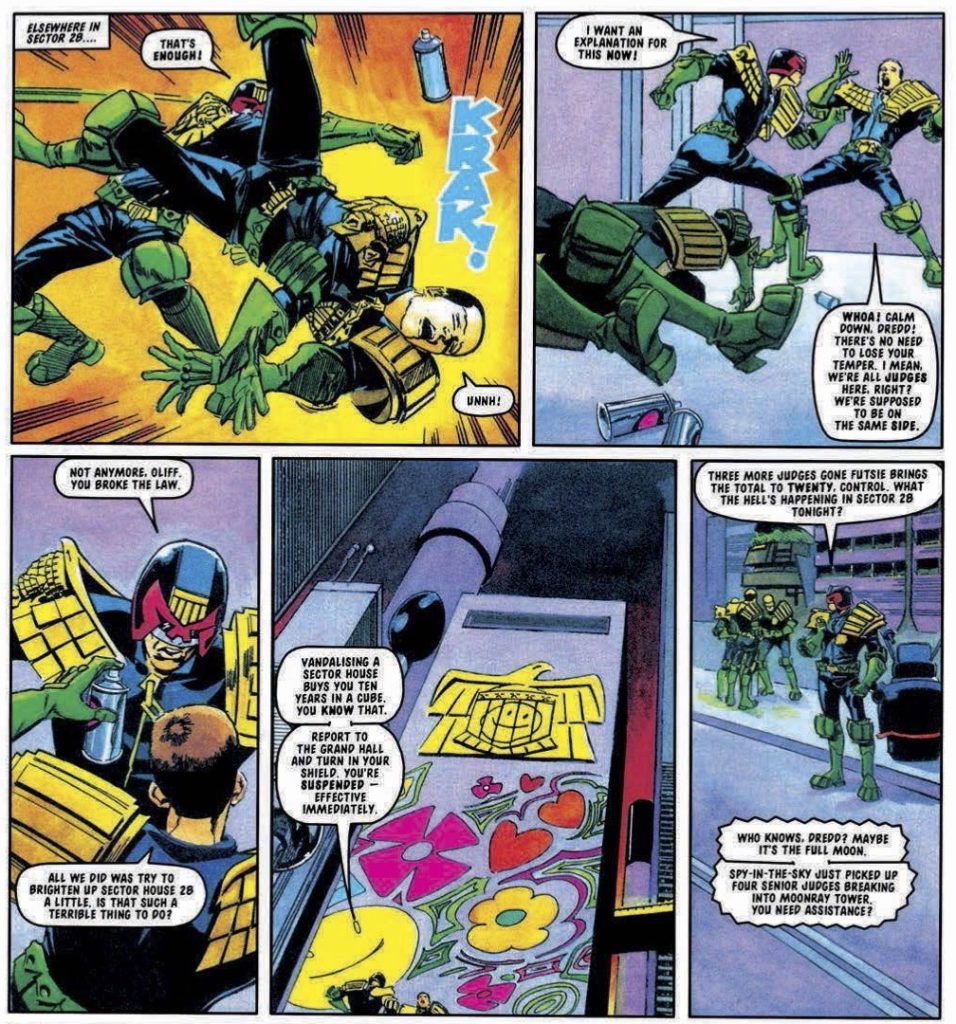 1:15:27-1:30:17: We back into the “Drokk or Dross question,” as I put it, by talking about whether or not the Magazine material really is worse than the 2000 AD material this time around, and offering up potential reasons why that might be so. (Both of us think it’s Drokk, by the way.) We also talk about the art in this volume, with me calling out both Steve Yeowell and Simon Davis, and offer up our favorite non-John Wagner stories here, before going on to praise Wagner to the heavens for “The Pit” especially, because (for me) it offers something new to Dredd as a series, and (for Jeff) it sees Wagner really approach things from a police procedural point of view, albeit in a skewed manner. 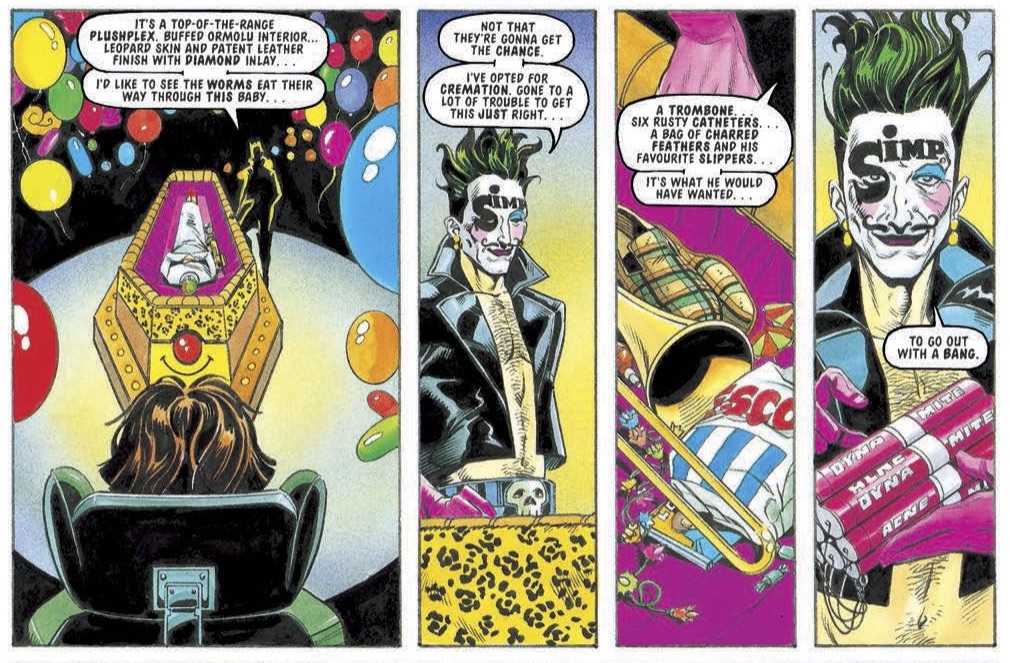 1:30:18-1:39:04: We’re not done, though; Jeff explores his love for the story “Mondo Simp” some more, and we discuss queer coding, and our differing reactions to where this story falls in the John Smith canon. There’s also a Mark Millar podcast idea that Jeff invents that has a name that really shouldn’t be ignored, and I hope someone picks it up and uses it as soon as possible. (And then invites Jeff on to share his feelings on the matter.) 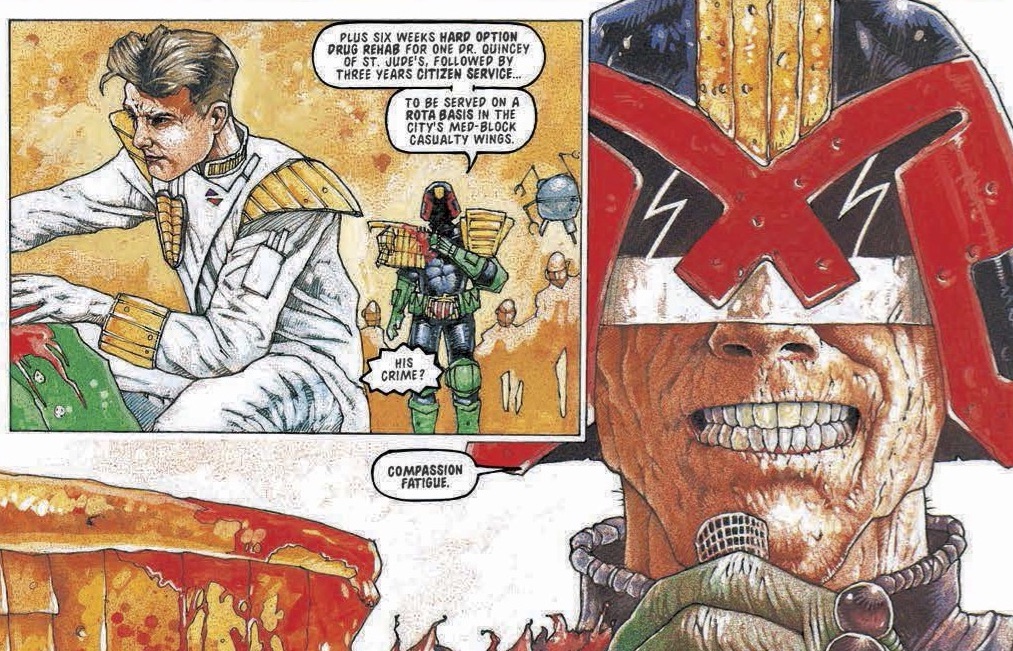 1:39:05-end: We close things down by reaffirming that we love “The Pit,” looking ahead to the next volume, and sharing the traditional mentions of our Tumblr, Instagram, Twitter and Patreon accounts, while also teasing a Geoff Johns discussion in the next Wait, What? that may never happen. This is why you tune in, Whatnauts, and we’re so very glad that you do.