Previously on Drokk!: John Wagner seems to have returned to greatness, judging by the first half of “The Pit,” a massive storyline that places Dredd in charge of the worst Sector House in Mega-City One, pushing him — and the Dredd strip as a whole — into new areas. 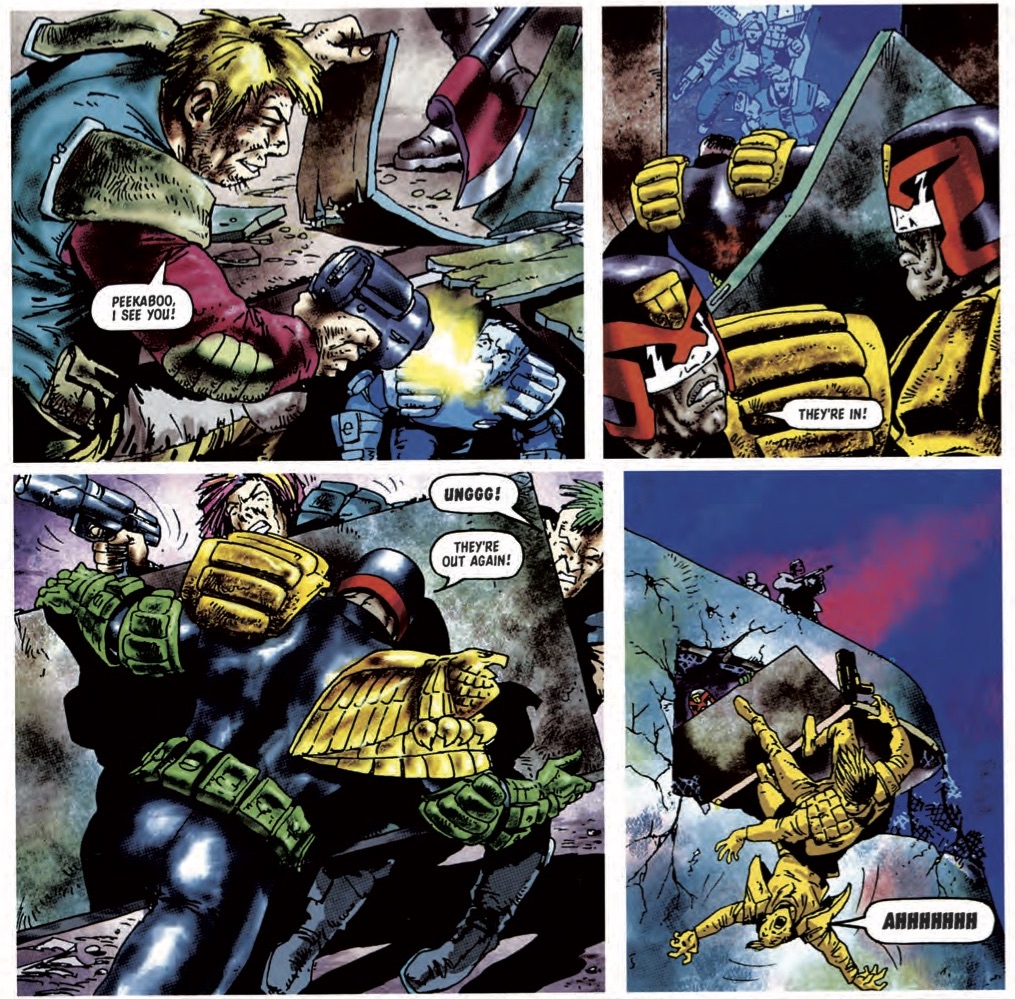 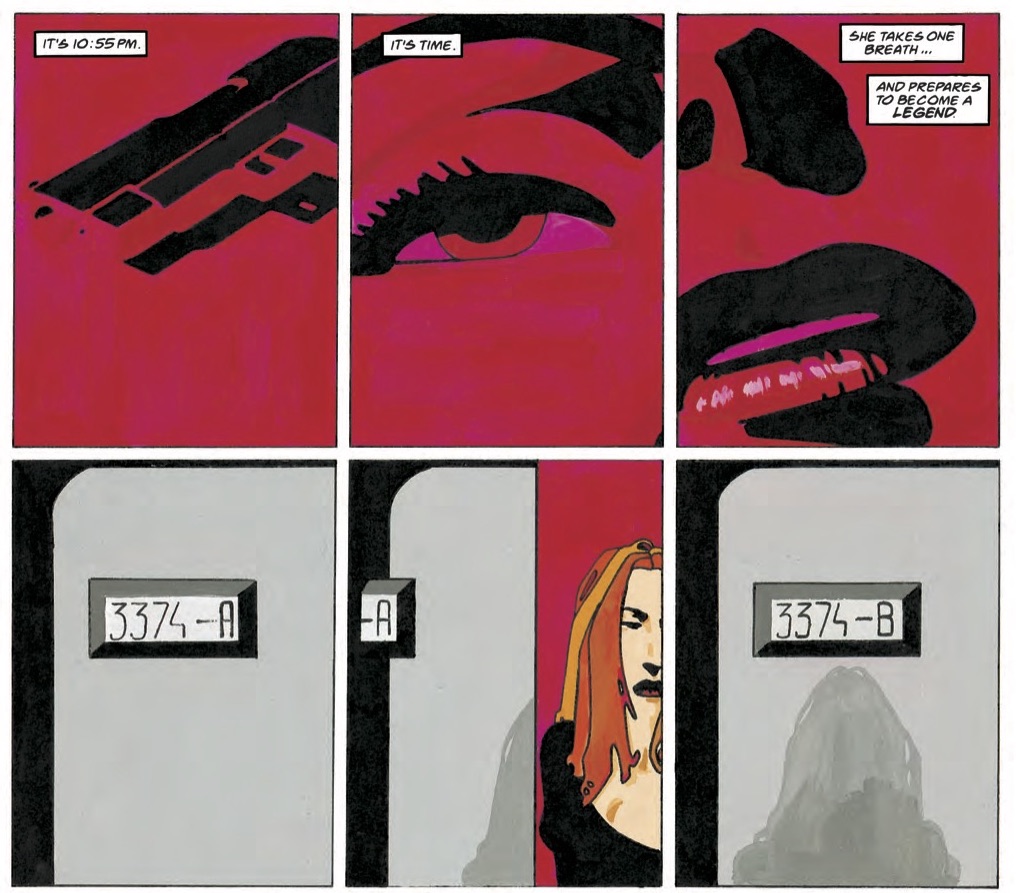 0:01:56-0:20:51: Part of the reason that it’s such an uneven volume is the fact that the Megazine material — which is only four stories — is quite so bad. In particular, we go after Marc Wignore’s work, especially the story “One Breath,” which leads us onto a discussion of what kind of 1990s influence is at play in such a narrative disaster. This takes us into a discussion of the artwork we didn’t like in the book — including Jason Brashill, Paul Peart, and Tom Carney’s chin-phobic turn in 2000 AD. Also under discussion: “Control,” and why why neither of us believe that Judge Dredd would stand by, frustrated, in the circumstances that story places him in. 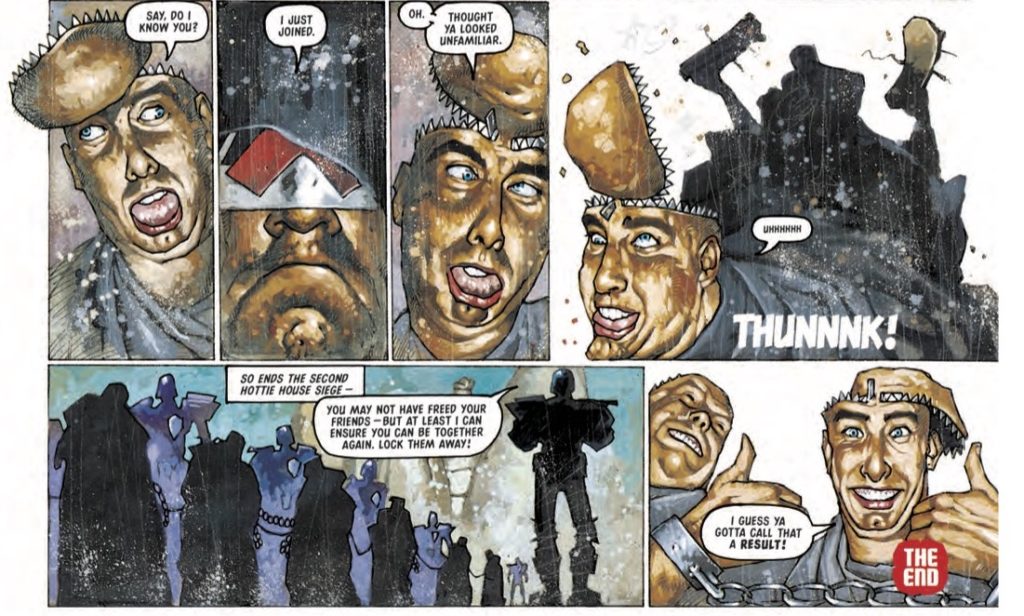 0:20:52-0:32:58: Turning our attention to the 2000 AD material, Jeff confesses which story is “repellent” to him — yes, he uses that word, and yes, he explains why — before we talk about just how great the final half of “The Pit” is, and explain the reason we’re talking about stories from this volume out of order. (Short version: It starts well and then trails off, and we didn’t want to have an episode that ended on such a downer.) That said, at least there’s “The Pack,” which features something Jeff is scared off, and something else that I love. (Spoilers: It’s Henry Flint’s artwork.) 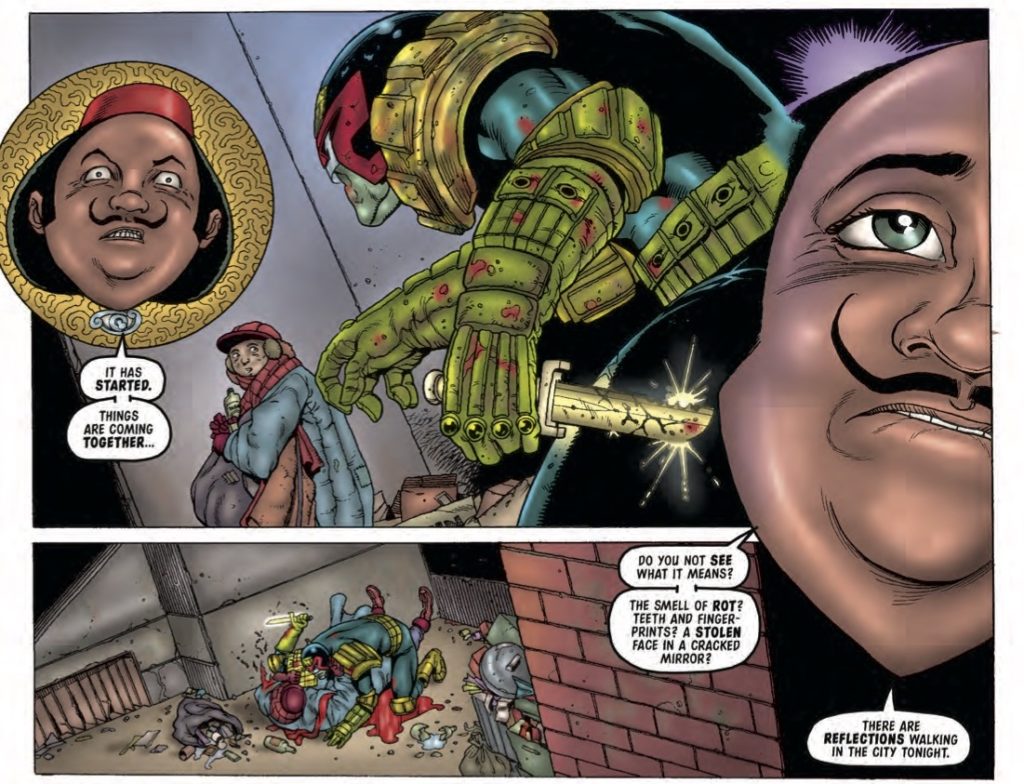 0:32:59-0:48:44: We disagree strongly about “Darkside,” the 2000 AD storyline from John Smith; I’m unconvinced by what I see as an extended exercise in nostalgia and a lot of near-Morrisonian cliches, but Jeff has a grand theory as to why those flaws are sidestepped to create a meta-commentary on the state of fandom and popular culture that is a quarter century ahead of its time. (I remain unconvinced, I admit.) The rare schism when it comes to Dredd! 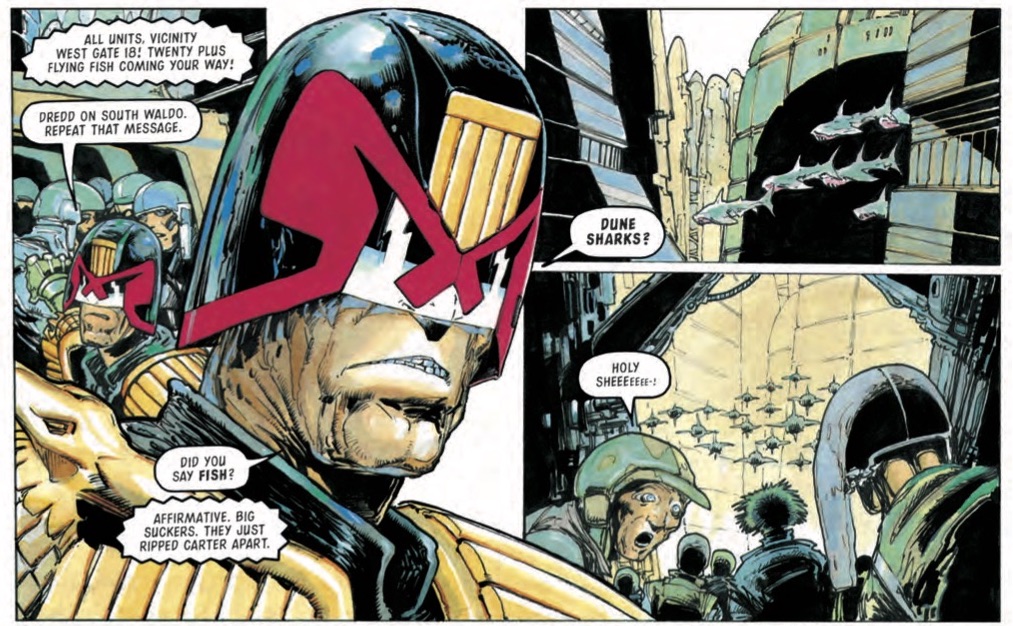 0:48:45-1:09:16: We double back to a couple of our favorite stories from this volume: “The Pack,” where the lure of flying sharks that eat people and cause shit proves to be irresistible, and “The Pit,” where Wagner seems to be pushing Dredd as a character and as a strip, in interesting directions. Those directions, and what they ultimately become in the future of the strip, are discussed — get ready for the comparison between Wolverine and “Judge Dad” — as is the fact that what feels like an evolutionary step comes to a sudden halt, only to be replaced by a series of episodes that feel almost retrogressive in comparison. Whatever happened to the Judge of Tomorrow? 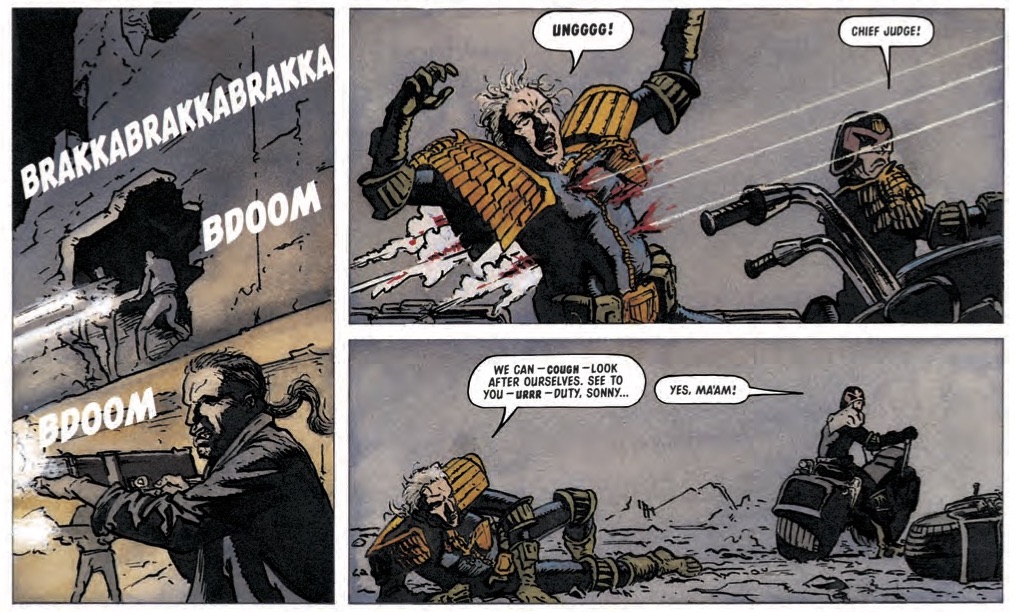 1:09:17-1:23:24: “Dead Reckoning,” the serial that immediately follows “The Pit,” is a rare misfire for John Wagner in this era. A large part of that, if you’re Jeff and I, is that it’s a story that centers around Judge Death, who is a particularly dull villain that has arguably run out of steam, especially in this era. Jeff is similarly unimpressed with “Death of a Legend,” the one-off that closes out the McGruder storyline once and for all, but I’m more of a fan — in part, as Jeff puts it, because I’m far more sentimental about these kinds of things because I’m Scottish. (Look, he’s not wrong, he even calls me out correctly for loving the many John Lewis Christmas ads!) One of the reasons Jeff doesn’t feel as favorably about it is that he’s less convinced that McGruder is a fully-formed character, making emotional connection and sentiment particularly unearned. He might not be wrong, to be honest. 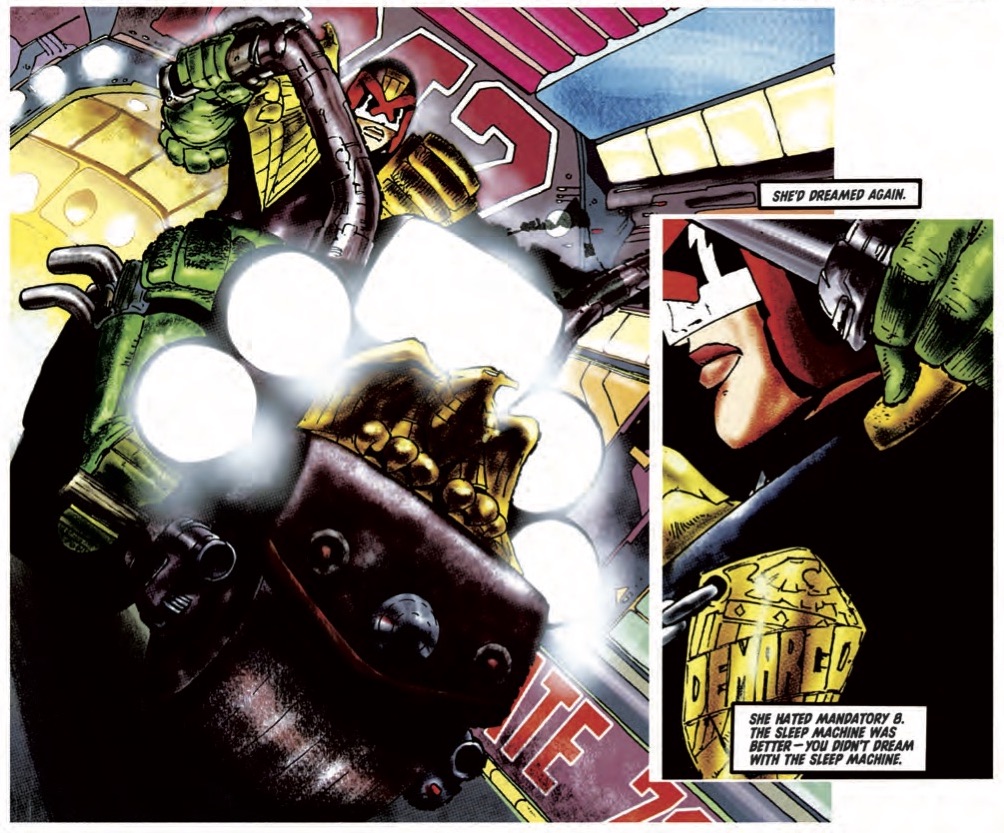 1:23:25-1:37:29: As we near the end of the episode, it’s time for that very special question: Drokk or Dross? We both come down on the side of Drokk, and have the same choices for our favorite stories in the collection: “The Pit” — and, really, the “Unjudicial Liasons” episodes therein — for our favorite Wagner-written, “The Pack” as a runner-up, and “Darkside” for the best non-Wagner story. Yes, even though I wasn’t really a fan; it’s still better than all of the Magazine material. 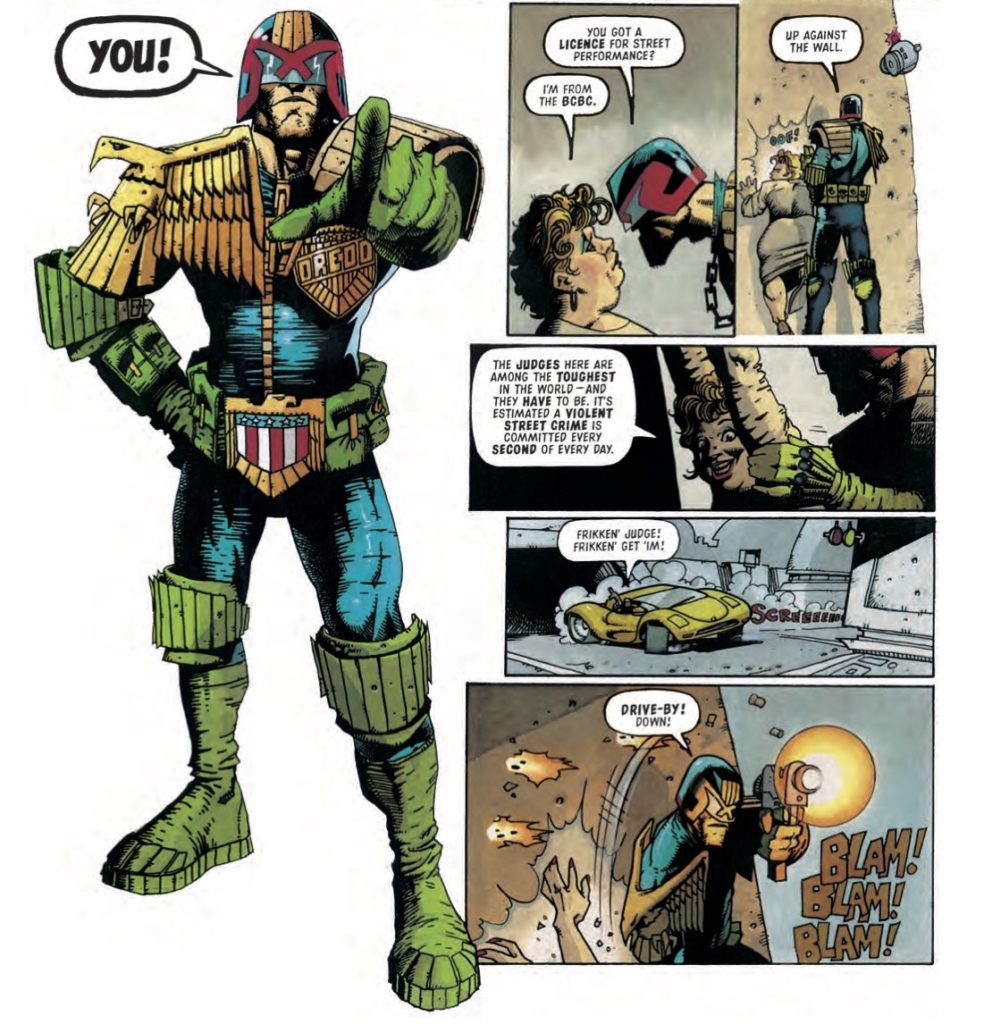 1:37:30-end: We wrap things up by briefly looking ahead to the next volume — more air sharks! — and offering the traditional mentions of Instagram, Twitter, and Patreon. As always, thank you for listening and reading; we, and Mega-City One, appreciate it greatly.