Previously on Drokk!: 20 years after his creation, Judge Dredd continues to patrol the streets of Mega-City One in a way that readers are comfortable with — the ultra violence, the dark humor, and the social satire wrapped up in sci-fi trappings. But as the strip heads into its third decade, series co-creator John Wagner dares to ask: what if things go slightly awry…? 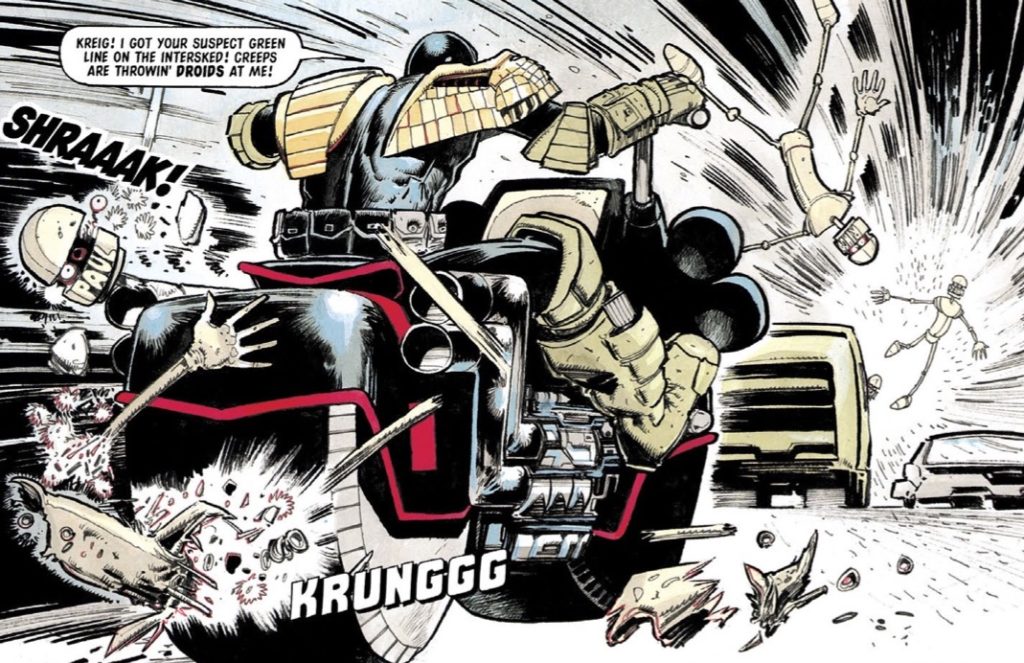 0:00:00-0:04:29: After a month off for a surprise Baxter Building revival, we’re back and talking about Judge Dredd: The Complete Case Files Vol. 27, a book that both Jeff and I found surprisingly solid and enjoyable. (It covers material from 1997 and 1998, with strips from 2000 AD Prog’s 1053-1083, and Judge Dredd Magazine Vol. 3 #s 34 through 38.) Of course, this being us, we immediately go off topic and Jeff talks briefly about both Adam Driver musical Annette and Fleabag. We are who we are, I guess. 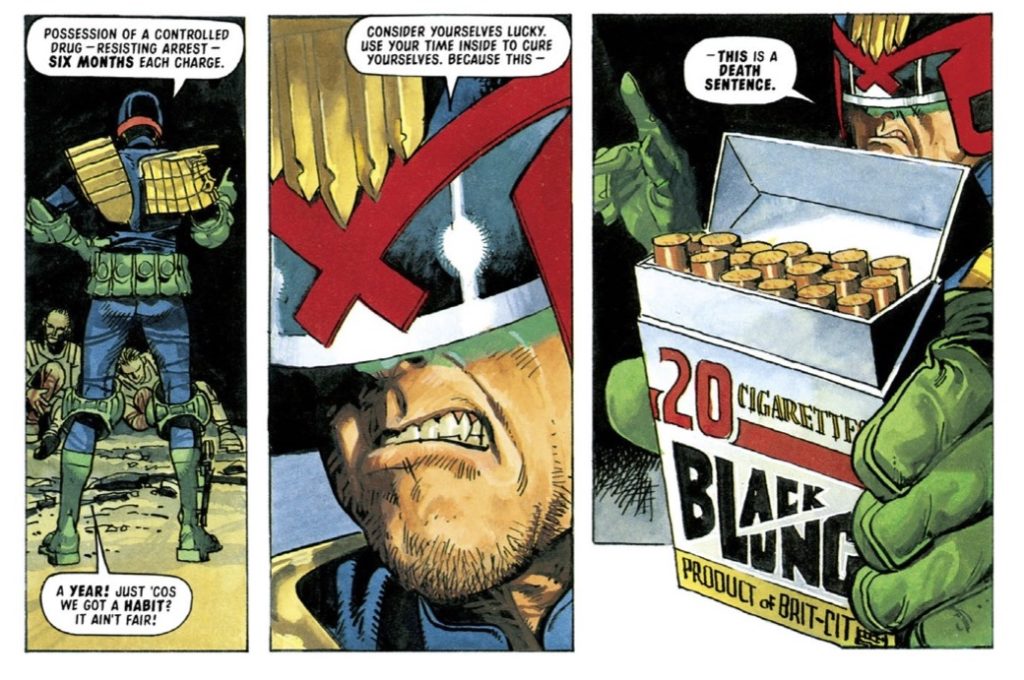 0:04:30-0:23:49: We didn’t get too off-topic, however, and soon find ourselves talking about the possibility that this volume is too steeped in Dredd mythology to be new reader friendly — which might be ironic, considering both that it includes a crossover with Predator, but also that it begins with a retread of a story we’ve seen at least twice before, but done in such a way that it loses the charm and humor that it’s previously displayed. Does “Holiday Special” introduce what Jeff calls “Wagner as scold,” and if so, what does that mean moving forward? 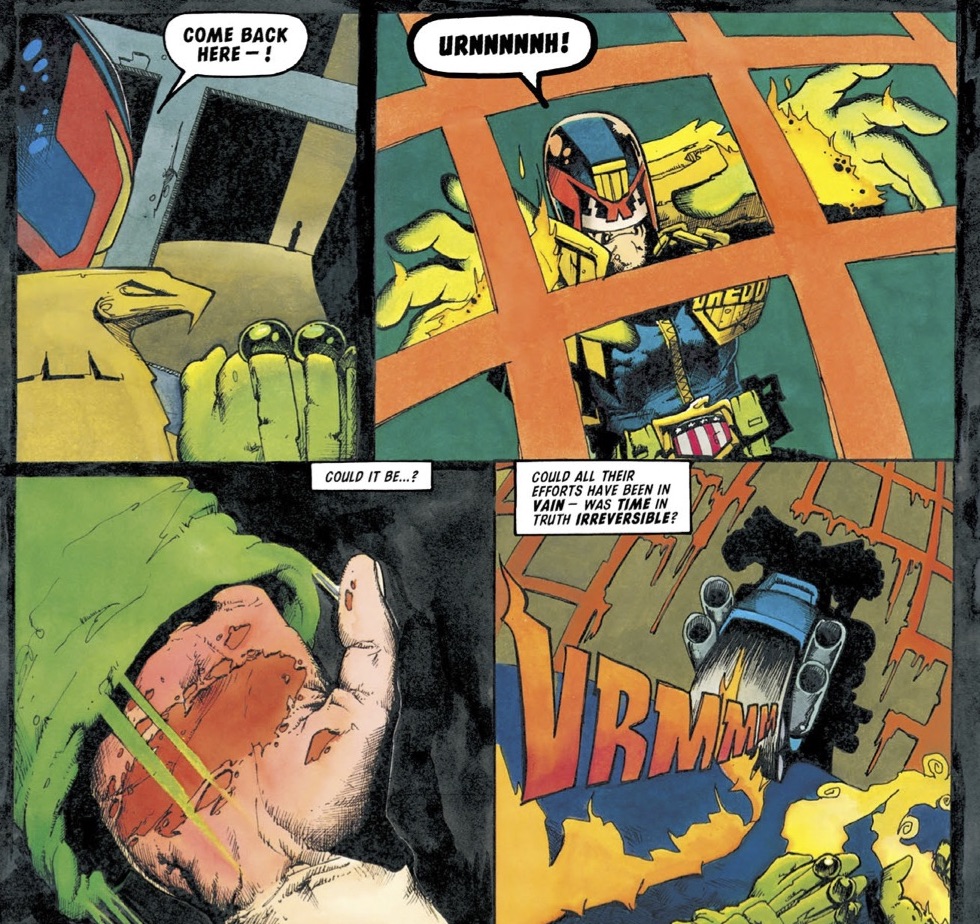 0:23:50-0:51:37: For a volume that we both enjoyed so much, we spend a long time talking about the material that didn’t work for us, especially when it comes to our discussion of “In The Year 2120,” which was almost doomed to failure from the start by nature of being an epilogue to “The Judge Child Quest” and “City of the Damned,” two mega-epics that neither of us remember particularly fondly. Unfortunately, that bad start is compounded by execution that fails to make the most of the story’s central conceit, whether it’s John Wagner failing to sell the idea or artist Jason Brashill being, honestly, too experimental with his layouts and designs for what the story really needs. As proof, we compare it to a far more successful spin on roughly the same idea in the same volume, “Spooks” — although, as Jeff suggests, even that story has some problems of its own, leading to a discussion about whether or not Wagner is failing to nail the right tone people expect from a Judge Dredd comic. (Yes, John Wagner, the guy who created the strip and defined our expectations of it.) 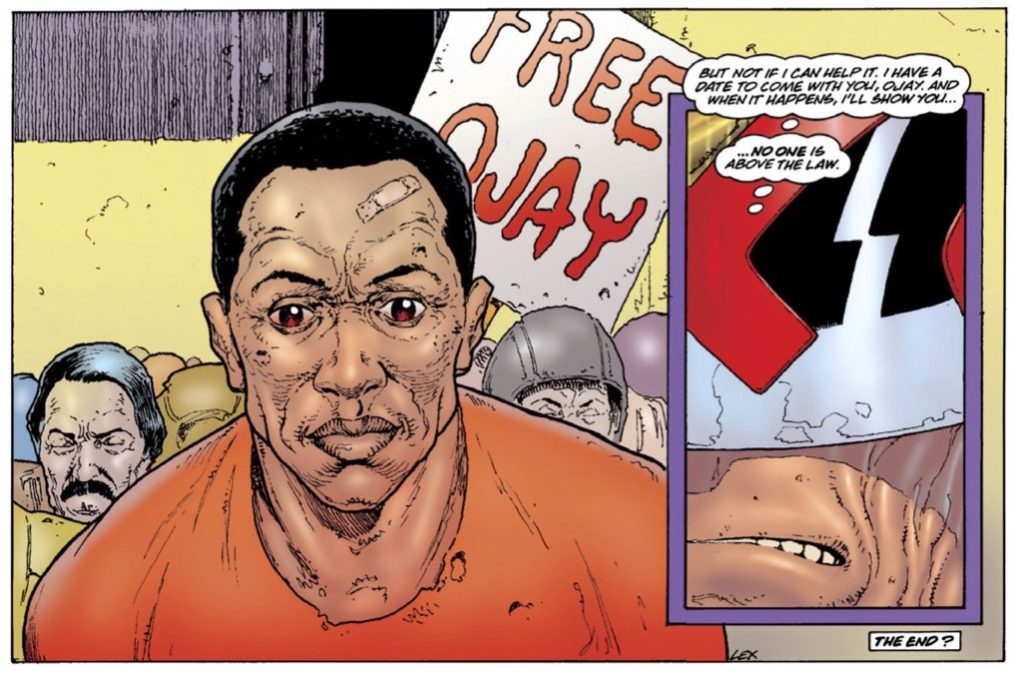 0:51:38-1:15:20: Returning to the idea of Wagner as scold, does this volume mark an increasing blurring of the line between Dredd and Wagner, at least in terms of whether or not the character can be an immoral bastard? Two stories raise that possibility in different ways: “Spawney,” which I enjoyed far more than Jeff — despite a final page reveal that arguably undercuts everything that came before — and ‘Ojay,” a story that is little more than the most thinly veiled primal scream from Wagner about the then-contemporary O.J. Simpson verdict. We talk about both, and the ways in which Wagner arguably fails his creation in different ways with the two. (We also talk about Alex Ronald’s art on the latter story, and one particularly strange artistic decision that, to be honest, I’d still like to see some explanation for.) 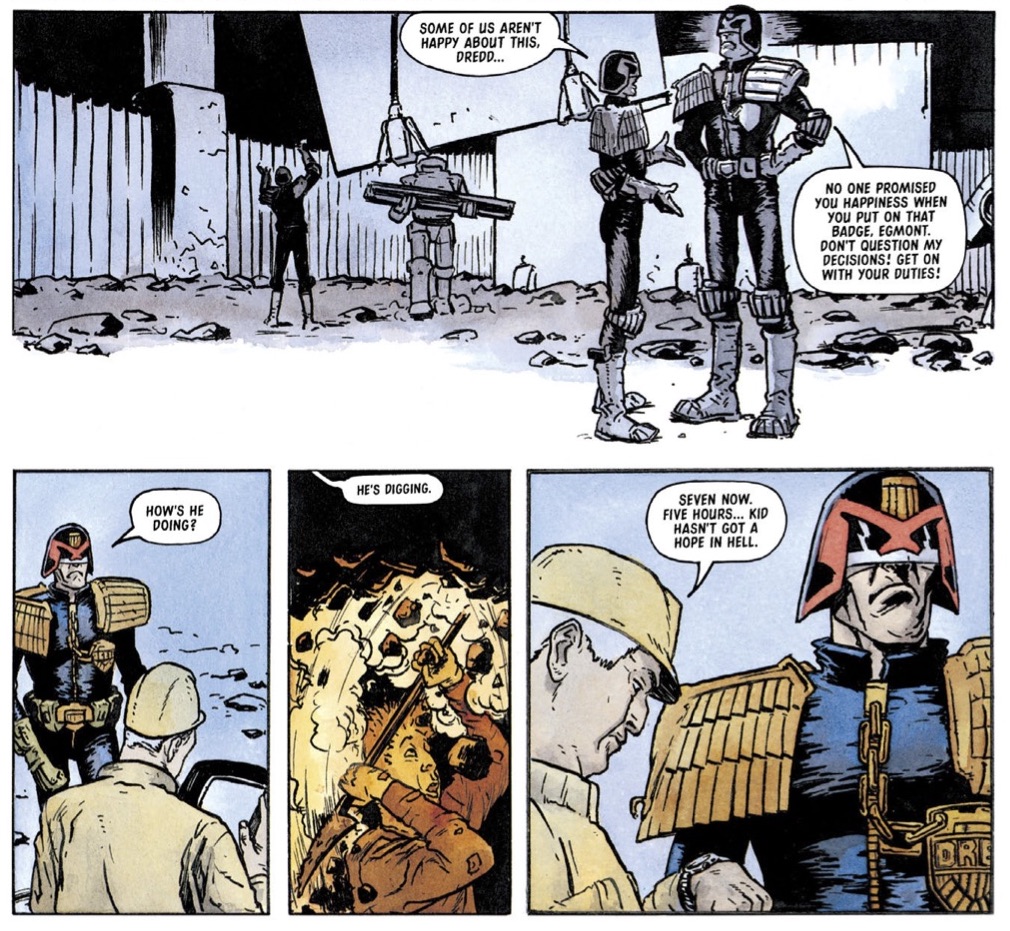 1:15:21-1:18:24: In an attempt to keep things moving, we very briefly talk about the other stories in the volume that aren’t disappointing. Despite the fact that we rush through this, I promise: There’s lot of very good material in this particular volume. Really! 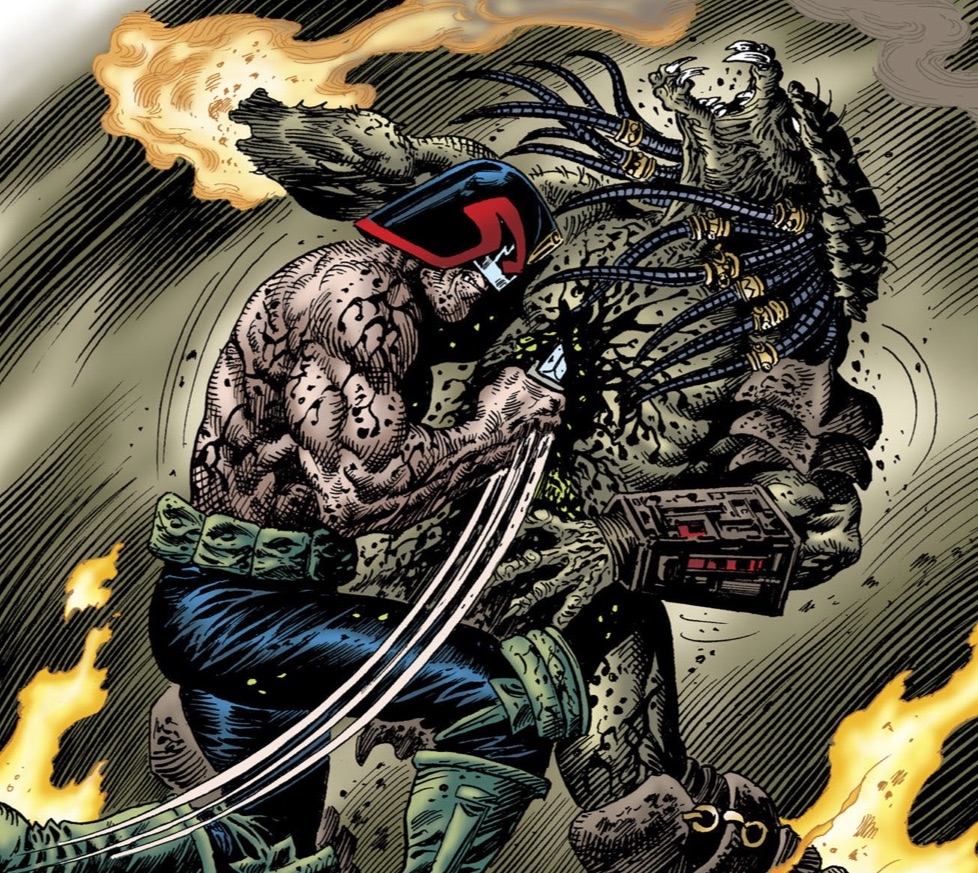 1:18:25-1:40:11: Why talk about good stuff when you can talk about a car wreck, though? And so, we arrive at Predator vs. Judge Dredd, which is… not very good at all. It’s a story that doesn’t serve either property well, with the most generic take on both Dredd and the Predator showing up in a story that utterly underwhelms and features some odd narrative decisions, whether it’s having a descendent of Arnold Schwarzenegger’s character from the original movie show up, or giving the Predator an ending that makes Jeff so mad, he cites Broforce as a preferable alternative. It’s such a poor showing all round that we make a brief digression into whether or not all Dredd intracompany crossovers are a bad idea for Rico’s more popular brother. (They’re not; the first Batman/Dredd and the later Dredd/Aliens are both great.) 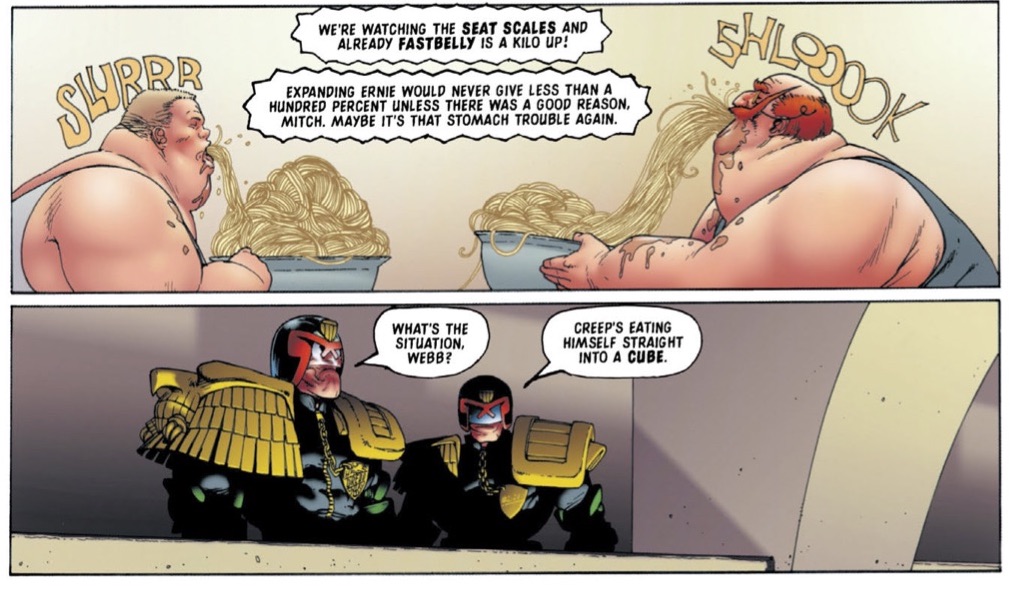 1:40:12-end: We wrap things up by revealing whether this volume is Drokk or Dross — it’s Drokk, honest — and name our favorite stories. (Me: “Bo Peeper,” or the multi-part “Missing,” Jeff’s is “Mrs. Gunderson’s Little Adventure,” and we very briefly talk about both here.) We also look forward to the deluge of John Wagner awaiting us in the next few volumes, Jeff realizes just how he’d finish his dream Dredd story, and we plug the Twitter, Instragram and Patreon, as we always do when we’re bringing things to a close. As always, thanks for reading and listening; next time, I swear, we’ll try to talk more about the good stuff.