Previously on Drokk!: When we last checked in with Judge Dredd: The Complete Case Files, we were surprisingly disappointed with the ways in which it felt… underwhelming and, at times, lesser than the history of the strip, perhaps? We put much of that down to the presence of Alan Grant in the writing credits, so what should we make of Vol. 32, which is predominantly the work of one John Wagner…? 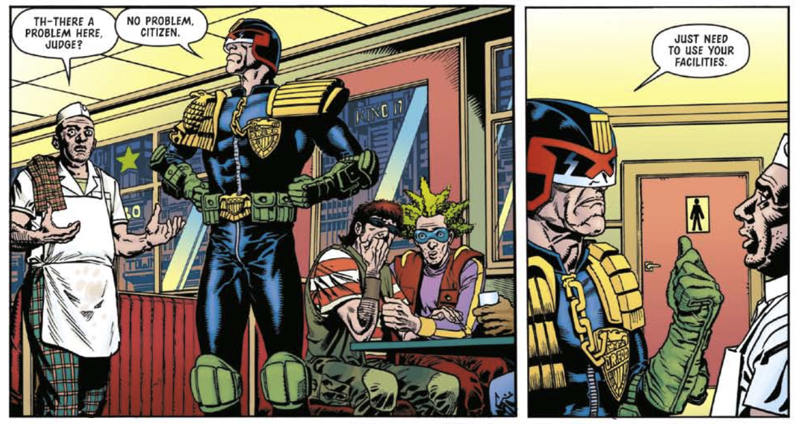 Unusual Audio Note: Try as I might, I couldn’t get rid of a strange Doppler effect at times when I’m talking; it comes and goes seemingly without rhyme or reason, and isn’t present just on my audio track at all, but Jeff’s. I outright muted his audio in places, but it still shows up in places. Sorry; I hope it’s not too distracting.

0:00:00-0:03:01: A speedy introduction lets the listener know two very important things. Firstly, that we’re covering Judge Dredd: The Complete Case Files Vol. 32, which covers material from 2000 AD and Judge Dredd Magazine in 2000 and 2001, and secondly, that I’ve just had a chocolate bar before we started recording. Spoilers: only one of those facts is actually important to the podcast as a whole. 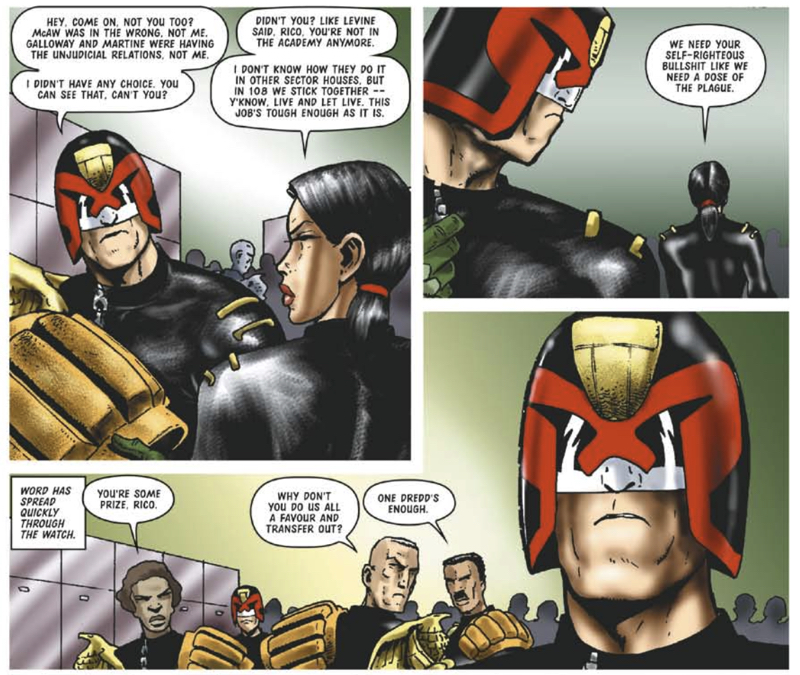 0:03:02-0:27:11: We get started pretty quickly, by talking about the “Sector House” storyline, and the “Blood Cadets” story that preceded it and set it up, as Jeff asks what my definition of “Mega-Epic” is — does an eight-part story count, especially if it’s by Wagner and Carlos Ezquerra? (No.) Before too long, Jeff is sharing his dislike of Simon Fraser’s art, his enjoyment of the retcon of Rico Dredd and potential reasons for his off-screen villainy, and we talk about what it might mean for John Wagner to finally be telling origin stories for Joe Dredd this far into the strip’s run. (I also mistakenly refer to the strip as having run for 13 years at this point, instead of 23 years; it’s not the only time I make that mistake this episode.) Also! Just how great is Carlos Ezquerra? We’ve already counted some of the ways, but here’s another one: his skill at making Rico look like a younger Dredd, yet still differentiating the two in simple, subtle ways so that it remains very clear who we’re looking at. He’s so good, everyone. 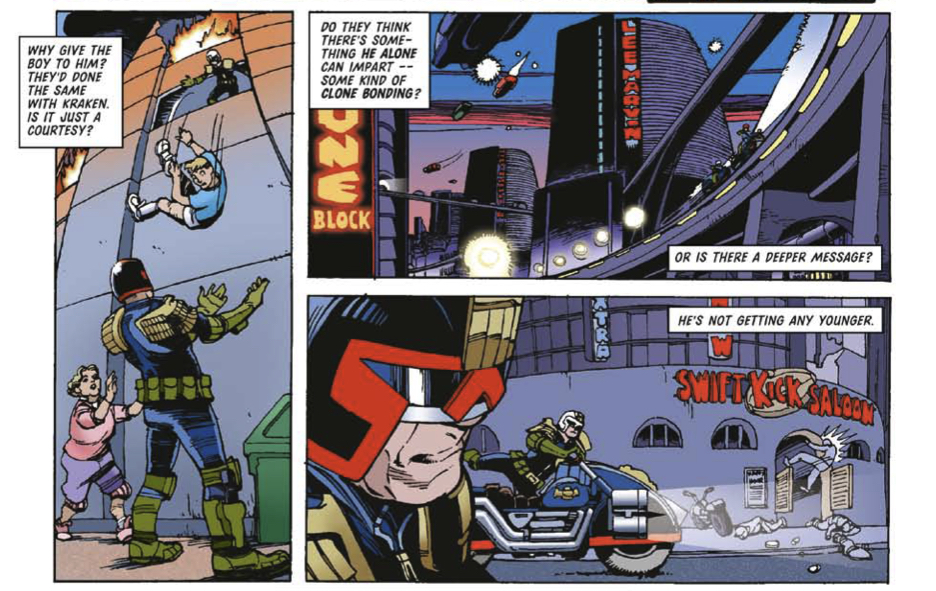 0:27:12-1:05:36: From the sublime to the… less sublime but still enjoyable, I guess? We spend a little more than half an hour talking about a bunch of other stories in the collection, and why we like them so much. The short version is, “John Wagner is very good at what he does.” This, of course, includes discussions on the art that we don’t like in the volume (Pete Doherty, Siku, we’re sorry), including a request for you, dear Whatnauts, to leave comments about whether Simon Fraser or Patrick Goddard’s art is most similar to 1990s Fantastic Four stalwart Paul Ryan. (It’s Goddard.) It also includes commentary on the nature of the Magazine stories, the return of P.J. Maybe, the fact that Alan Grant actually outperformed John Wagner on one particular trope this time around (and Jeff interrupting me to get to my point before I could, in a surprise turnaround on tradition), whether or not one story is a backdoor pilot for a series that never ended up happening, and much, much more. Most importantly, we finally learn what it takes to get Jeff to accept sentimentality in a Dredd story. Who knew dinosaur kids were his one weakness? 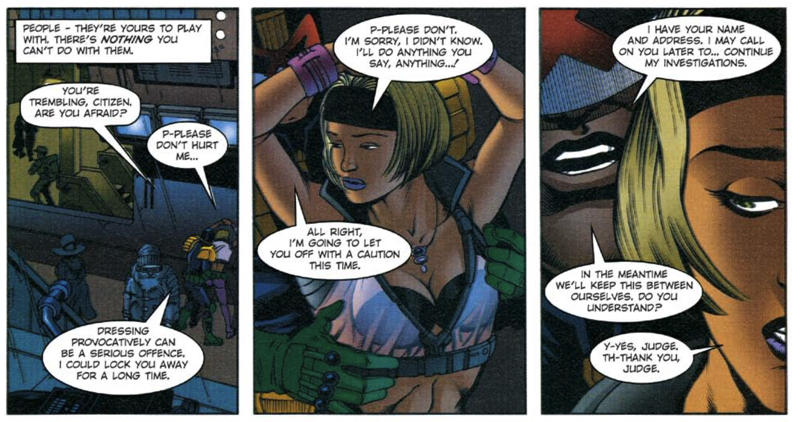 1:05:37-1:26:56: Things get meta for a period, as we discuss how difficult it is to talk about Dredd 36 episodes in, especially when a volume is good, but also filled with one-off stories that don’t contribute to larger plots or themes. Are we repeating ourselves when we say, as Jeff literally does here, “Fucking Wagner’s the GOAT”? Also: was Dredd as a property essentially self-sufficient and self-run by this point, because Wagner does so much of the heavy lifting and quality control by himself? Jeff references Thrill Power Overload, and I once again mix up 13 and 23 years, although Jeff does thankfully correct me this time around. 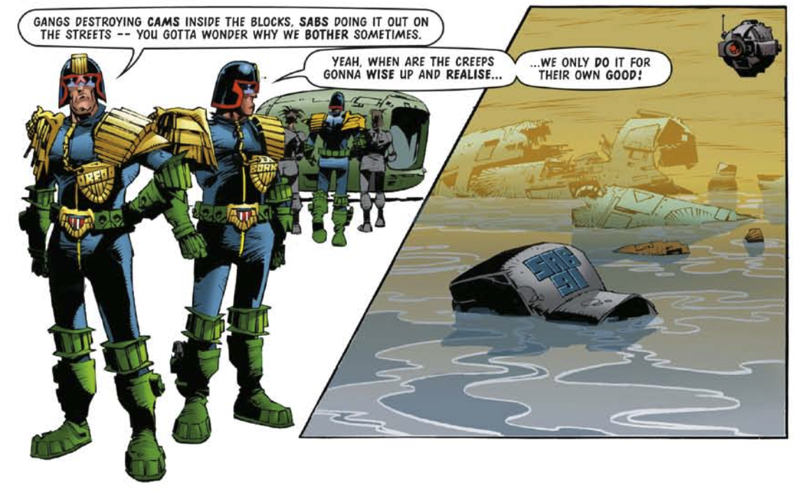 1:26:57-end: We wrap things up by mentioning our favorite stories — “Blood Cadets” and “Sector House” for both of us — and our least favorite (“Ghost in the Machine,” as Jeff rightfully points out, although “Ten Years” came very close for me), before teasing a less certain future for the strip as Wagner begins to withdraw slowly, and then mentioning the Twitters and the Patreon, as is our tradition. (We didn’t say it at this point, but had already established: this volume is Drokk, by the way, rather than Dross.) Be back next month for the worst cover of the entire Case Files series; as Jeff would — and indeed, does — say, “Bazinga!”