Previously on Drokk!: The unlikely combination of Judge Dredd and the Alien franchise produced a particularly strong epic, while relative newcomer Gordon Rennie staked a claim as the best non-John Wagner writer the character has seen since the earliest days of Alan Grant. Things are looking up! 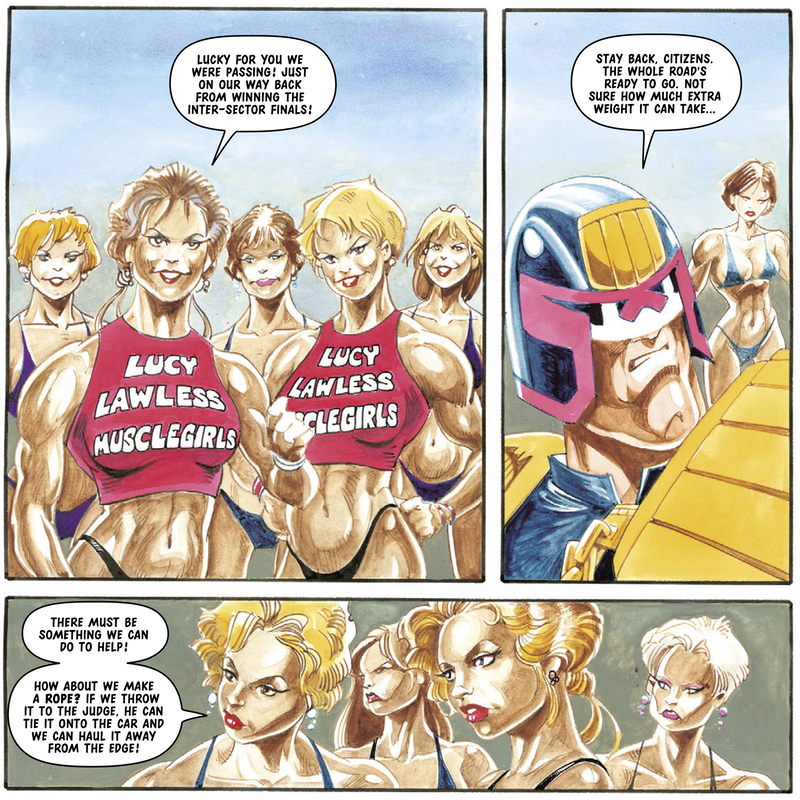 0:00:00-0:06:51: In addition to Jeff’s unexpected a cappella version of the theme music, we introduce ourselves and the book we’re talking about this episode: Judge Dredd: The Complete Case Files Vol. 37, which collects material from 2003. That’s right; we’re within two decades of publication now, shockingly. I start complaining about the volume early, setting the tone for what’s to follow. 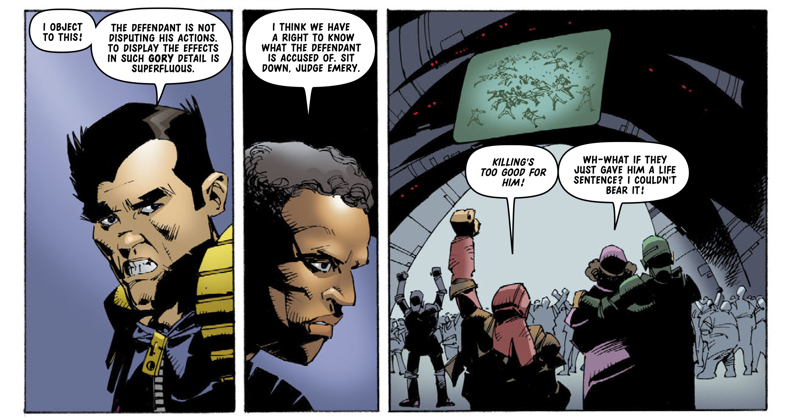 0:06:52-0:25:01: We slide quickly into talking about “The Trial of Orlok,” a two-part story that manages to simultaneously underwhelm and overwhelm the reader in wrapping up the long-running plot about the Sov-City super spy and his attempt to get revenge on Dredd for the events of the Apocalypse War. Why does this story fail to offer anything new, and why are there so many panels and speech balloons per page? Is Wagner trying to echo his earlier trial of Dredd storyline with this one? Is Cam Kennedy the wrong artist for this story, and relatedly, am I the sumo wrestler of Cam Kennedy fans? (It’ll make sense when you listen, I promise. Well, more sense.) And, most importantly, why does this storyline feel like such a waste of everyone’s time, and Orlok’s potential? 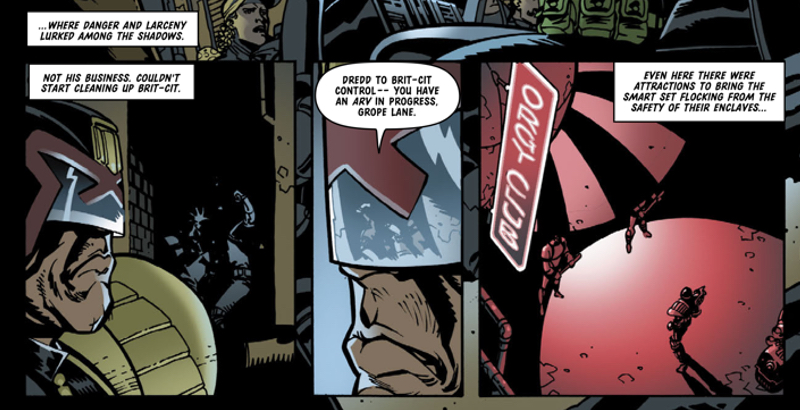 0:25:02-0:51:23: I was similarly disappointed with “The Satanist,” but in discussing it with Jeff, I admit that I find myself pretty much turned around to a large degree. Its a Hammer Horror pastiche to some degree, and Jeff’s love of that and explanation as to why some of the shortcomings are actually, if not intentional, then at least in keeping with the source material genuinely helped me enjoy the story more. Also discussed: Dredd’s complicated relationship with his niece, and his similarly complicated relationship with his family in general; Dredd as comics’ greatest asexual, and what that means for his placement in a horror leaning heavily into noir tropes; Jeff’s description of Dredd’s uniform as “old man PJs”; and much, much more! 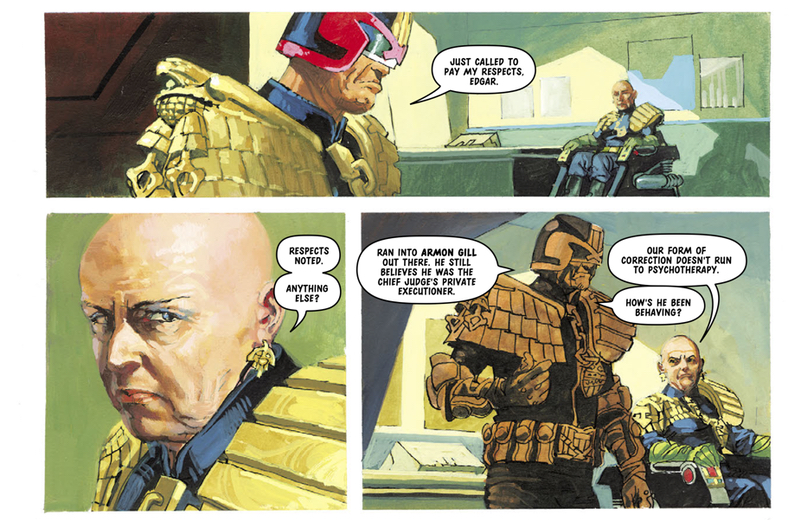 0:51:24-1:14:09: “There’s no sizzle on this steak!” is what Jeff has to say about “Revenge of the Chief Judge’s Man,” a storyline that he actually likes quite a bit — in no small part because of John Burns’ art, which we surprisingly don’t talk about much at all. (It’s really good.) Instead, we focus on Jeff’s love of what he himself calls “First Blood shit,” as well as an unexpected LMD twist with a great punchline at the end, the sudden switch into unstoppable superpowers mode for the eponymous Chief Judge’s Man, and the ways in which none of the fine ingredients for this particular story end up coming together entirely successfully. Come for the analysis, stay for Jeff’s great booing of me when he doesn’t agree with what I’m saying. (Honestly, I think the booing is really funny.) Actually, no; stay for Jeff talking about John Wagner’s narration and how successful it is, because he’s entirely right on that front.

1:14:10-1:36:15: Just an episode after we sang Gordon Rennie’s praises for being very Wagner-esque, we return to find his work in this volume lacking — but is that because of the page length on the Dredd strips in this particular era, and what that does to the comedy material? We also talk about the Megazine material from this volume in general, which includes a story actually called “Phartz,” one of shockingly two stories in this book about deadly forces that have uses for their victims’ anuses. (Unsurprisingly, “Inside Job,” the other of those two, also comes under discussion.) Plus! I don’t like Robbie Morrison’s sole contribution to the volume, “Hard Days Night,” and we briefly talk about how important I find artwork to Dredd shorts, and Dredd as a strip in general, all of which leads into… 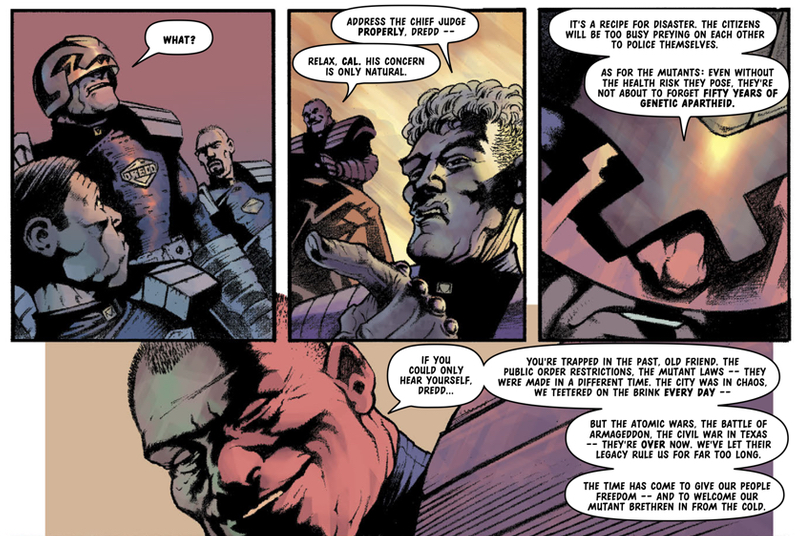 1:36:16-1:56:04: Garth Ennis had one last Dredd story in him after all, and it’s… not very good..? It does, however, feature amazing art from John Higgins, and we spend some time singing his praises, deservedly. Otherwise, we talk about the strange continuity mistake at the center of this story — something that gets Jeff referring to it as an Elseworlds — and the metaphors and real world politics that might lie underneath what is otherwise a pretty bigoted and gross story. (Really, commenters, Jeff and I would both genuinely love to know if you’re seeing what we are with this one.) 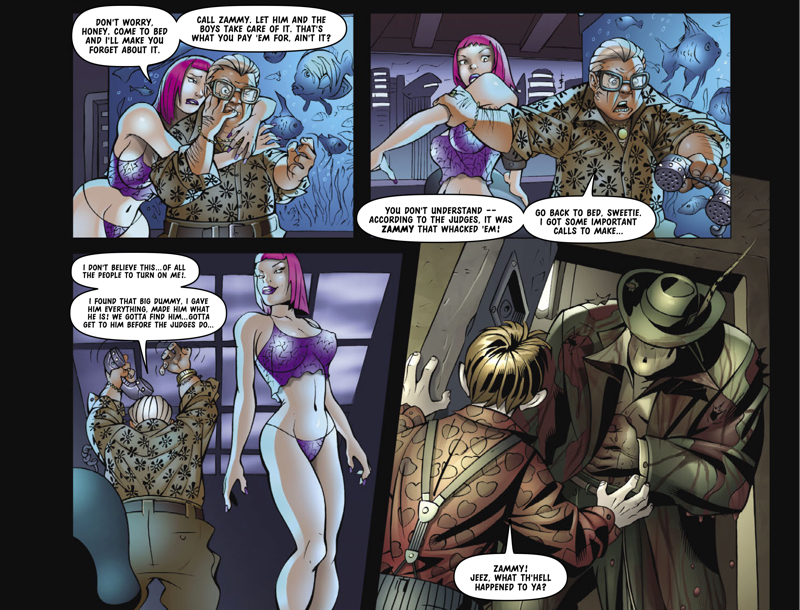 1:56:05-end: We wrap things up by asking Drokk or Dross, and at least one of us can’t make up our minds. (It’s me; Jeff thinks it’s Drokk.) Jeff’s favorite stories are “The Satanist” or “Monkey on my Back,” despite the bigotry at its core because that John Higgins art is so good; mine is, after I change my mind at the last minute, “Holding On,” a slight but amusing comedy short. “Bato Loco” is Jeff’s least favorite story, but I opt for “See Zammy Run,” and I make Jeff sad by teasing the return of Siku in the next volume. (I couldn’t help myself.) As always, we mention the Twitter and the Patreon, and as always, I’m very grateful for those who read and listened along with us this month.