[NOTE: Blog posts are like buses. So before you read me on WicDiv, please be sure to check out Graeme and Jeff doing a back-and-forth on DC Comics anniversary books. Oops. I’ll schedule better next time, I swear!]

I always put a spoiler warning in these things, even when there are no spoilers. And I always use the page break jump, just to keep the front page here streamlined and clean.

So let me be very clear, to avoid confusion or disaster: I am going to be discussing the big ol’ spoileriffic climax of The Wicked + The Divine #22, by Kieron Gillen, Jamie McKelvie, Matthew Wilson, and Clayton Cowles. I am going to discuss in at least some degree of detail, and there may even be a picture or two depending on how ambitious I’m feeling.

If you have any interest at all in WicDiv and haven’t read this issue, just stop here. Right here. Yes, that’s good. We can talk about something else soon. For everyone else …. 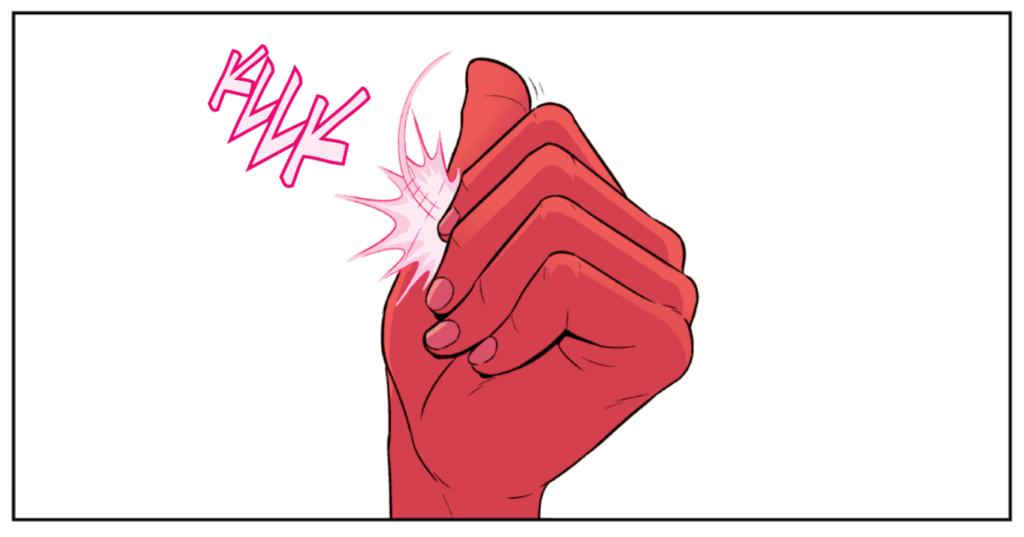 If you’ve read anything I’ve written here, you’ve probably realized that my tastes tend toward the mainstream, straightforward, and poppy. I like The Invisibles as a whole, but I love the overtly mainstreamed, consciously Tarantino-influenced Volume 2 the most. Similarly, while I adore Phonogram and WicDiv, my favorite Gillen McKelvie joint by far is Young Avengers. 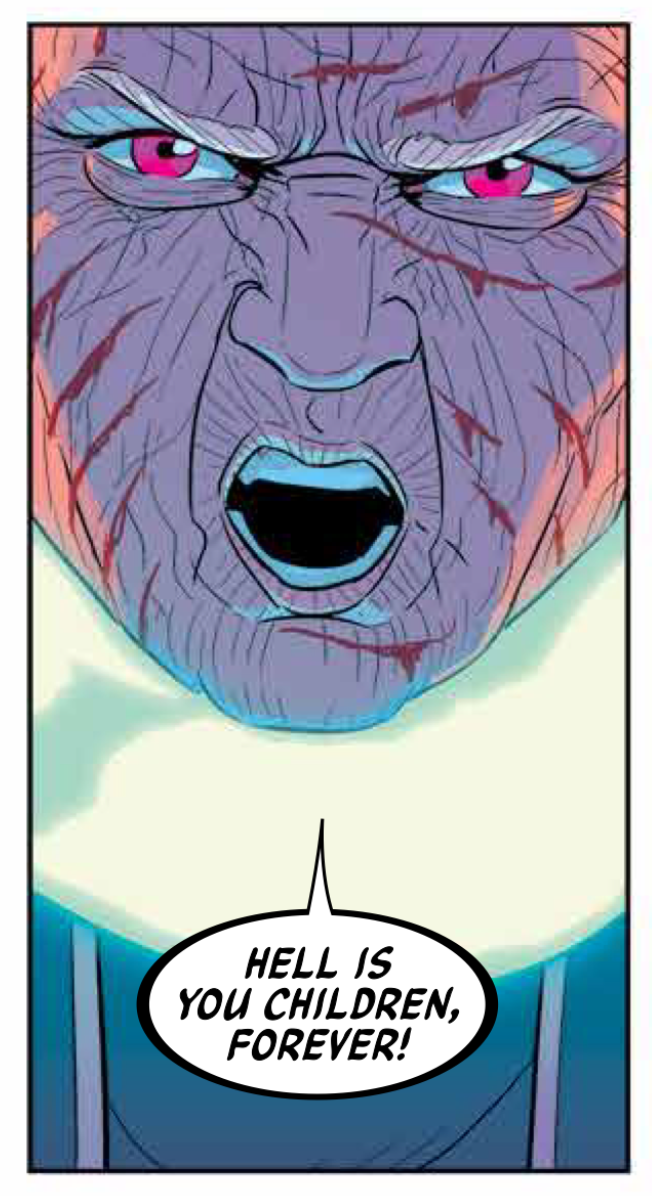 Something about working within–and straining against–the constraints of a shared superhero universe led to, in my opinion, the cleanest, easiest-reading work those guys have ever put out. It may not have had the personal resonance of Phonogram or the thematic certainty of WicDiv, but it had enough of each of those things while still being an accessible, mainstream superhero book.

This most recent WicDiv arc (running from #18 to #22) is a very conscious and overt turn toward that style of storytelling for the team, all the familiar beats and moments of a big superhero battle within the confines of the established WicDiv cosmology, culminating here in a very familiar scene. And it is terrific — confident, effective, and fascinatingly ambiguous.

(Last spoiler warning, for those of you who decided to cautiously press on…..) 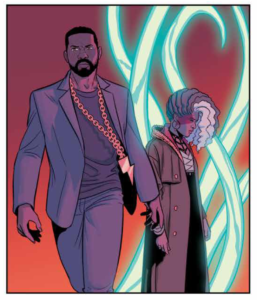 The battle between the gods maintaining loyalty to Ananke and those who believe Laura’s account of Ananke’s nastiness culminates, as it had to, with Laura’s forces busting in just in time to stop Ananke’s murder of child-god Minerva. A battle ensues, culminating with Ananke at Laura’s mercy and Laura faced with the classic superhero decision of kill v. no kill.

She decides, and then everyone present is forced to deal with the fallout.

So far, so superhero comic. At that level of abstraction, this is literally the plot of an extended West Coast Avengers arc. 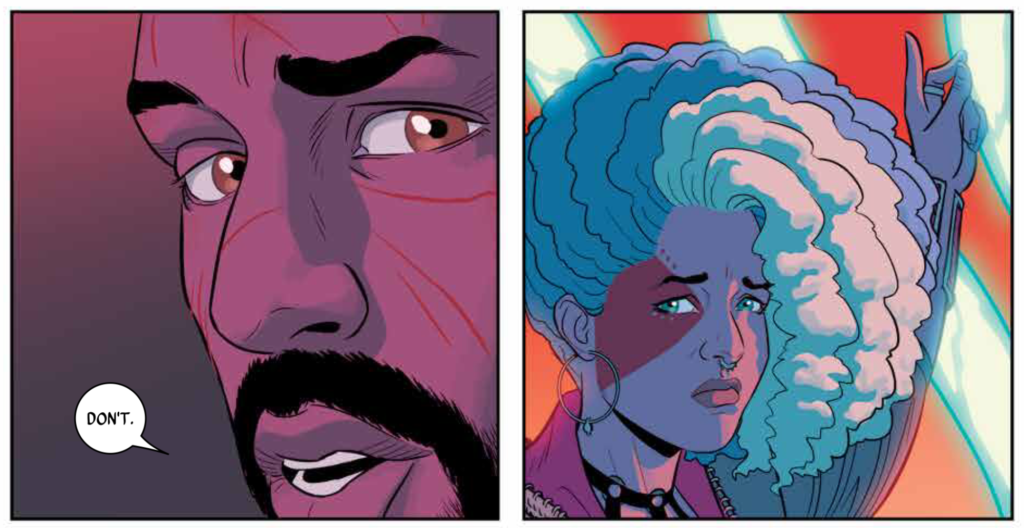 And Gillen, who knows his triumphalist moments, nails one here. (One of the first times I remember encountering Gillen online, he was ranting about triumphalism in pop music, specifically Johnny Boy’s “You Are the Generation That Bought More Shoes and You Get What You Deserve”.  The kick-drum patterns from the start of that song made its way into Young Avengers (via its originator, “Be My Baby”), and this was, I dunno, the fist-pumping “yeah yeah” at 2:00 minutes in or something.

Then a silent panel–even here, with the mental and temporal break of the page turn, they want that one extra beat. Johnny Boy is the group that makes me think of Gillen, but he’s made the analogy between this arc and the pop bombast of 1989-era Taylor Swift. In that context, this panel is absolutely the little hiccuping stutter at 2:29ish of “Out Of The Woods” just before the “remember when you hit the brakes too soon” bridge. (Worth noting that at the song’s second quiet-loud caesura, from about 2:58 to about 3:15, T-Swift is wrapped in vines that look not entirely unlike the energy bands restraining Ananke in this scene.) 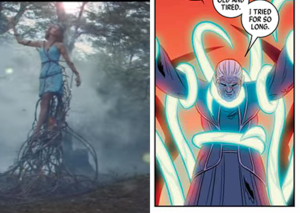 And only then, after that panel, does Laura start the rumbling build-up to her decision. It is classic badass-ery, a tight-little rendition of an Inigo Montoya bit, followed by a splash page climax.

It is great, a perfectly executed Hollywood hero moment … and within three pages, any heroism has been rendered questionable at best, and might be totally undercut. The other gods prepare to lie for Laura, and Woden, who even the recap page calls a “shithead,” points out the hypocrisy there. And the issue ends on Laura, covered in (bad) blood and with uncaring dead eyes, smoking and standing front of Ananke’s dead arms, pointing out that now the gods can do “whatever we want.”

If you jump right back to the start of the issue and reread it with the ending in mind, it is impossible to avoid the interpretation that Laura is as much the bad guy here as was Ananke. Or, more accurately, that there are no good guys here at all–just some terrifyingly human gods.

It’s not groundbreaking; even within that reversal, it’s still a somewhat familiar scene. But it is executed with such Taylor-Swiftian pop confidence that it approaches perfection. It’s rare that I’m the most excited I’ve ever been for a book at the close of issue #22, but here we are. 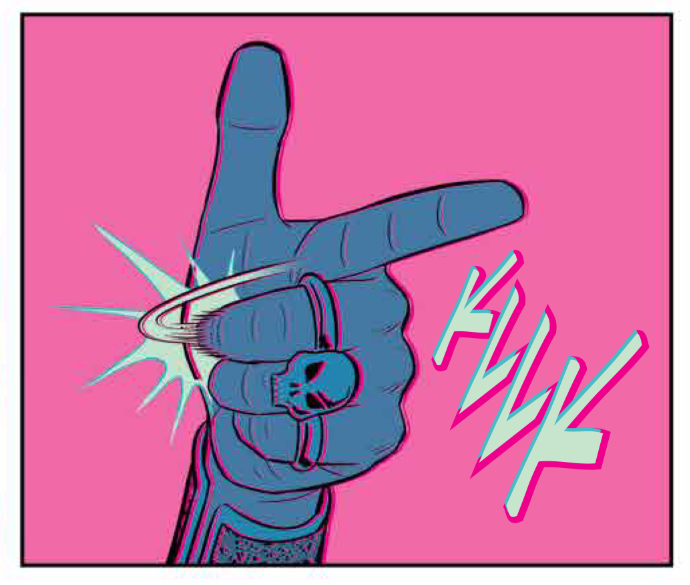