Previously on Baxter Building: For once, the What Has Come Before of it all is pretty important for these issues, so here’s what you really need to know: The Thing left the Fantastic Four at the end of Secret Wars to stay in space, and in his absence, his girlfriend Alicia ended up getting together with — and eventually marrying — his former teammate the Human Torch. When he eventually came back to Earth, he went through an unconvincing tough guy phase, but just when you think he’s gotten to some kind of emotional catharsis… Steve Englehart shows up to make things really uncomfortable for everyone involved. 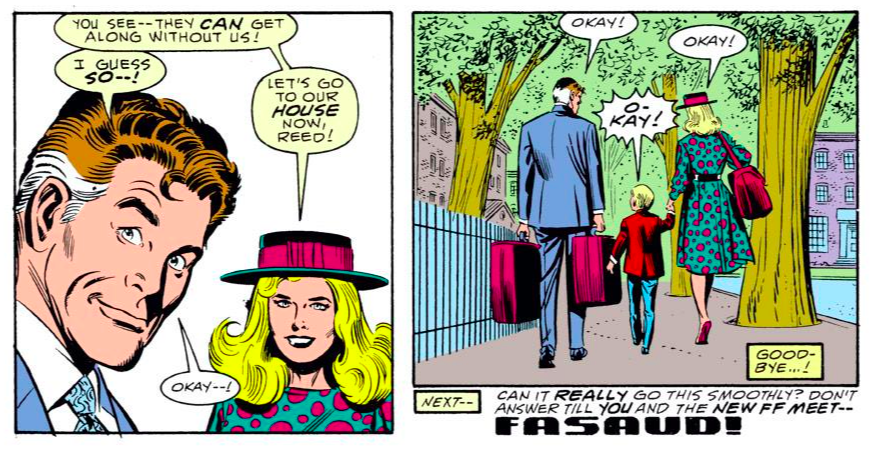 0:00:00-0:15:20: We open things up, somewhat unexpectedly, with a summation of the issues to come. Chalk it up to my excitement over the arrival of Steve Englehart as series writer, and the soap operatics he brings with him. But are those soap operatics too much? Jeff and I spoil some of the plot elements lying ahead as we discuss Jeff’s misgivings over where Englehart goes, and more importantly, how far he goes with some of the dysfunctional pieces of his Fantastic Four, before jumping straight into…

0:15:21-0:31:43: …Fantastic Four #304, in which Quicksilver arrives as a villain and also an analog for the Thing, although that is curiously underplayed in an issue where almost nothing is underplayed. Plus, the FF rejoins the Marvel Universe, the way the Englehart era is already different from the Byrne era, Englehart’s work co-existing with the Englehart legacy as the Marvel Universe, and the best Roy Thomas impression you’ve ever heard. 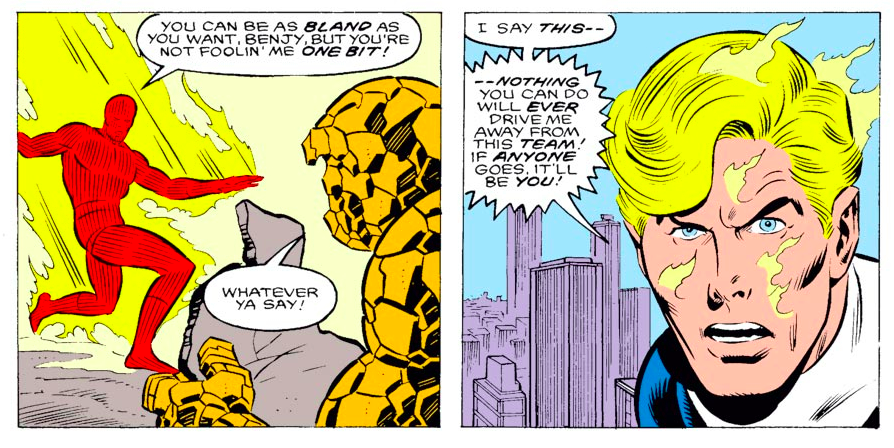 0:31:44-0:42:40: Is Ben Grimm more of a monster than we’re willing to admit? FF #305 makes a good case that the answer is yes, but it’s not because he’s made of orange rocks. Jeff and I talk about Ben’s bad decisions, the emotional complications that feel at once soap operatic and honestly complex, and the ways in which the series continues to shift with each issue while still feeling utterly organic. 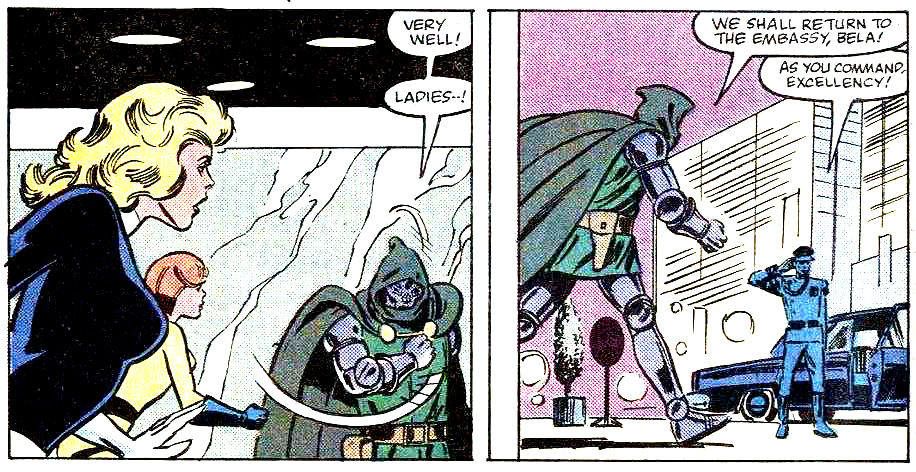 0:42:41-0:54:25: It’s the surprise Fantastic Four Annual #20 that I didn’t know we were going to be covering this time around — but that turns out to be a very happy accident, as we get two times the Doctor Doom (and both Jeff and I love Englehart’s Doctor Doom) and the best Reed Richards we’ve probably seen during the entire run of the series. All this, and at least two bits of story that are just so good that we couldn’t help but comment on them (as well as the answer to the question, “Why should you always take the first deal Doctor Doom offers?”) — face it, friends: this might be the Mighty Marvel Age of “Guess That Was A Good Thing We Had An Annual To Read, After All!” 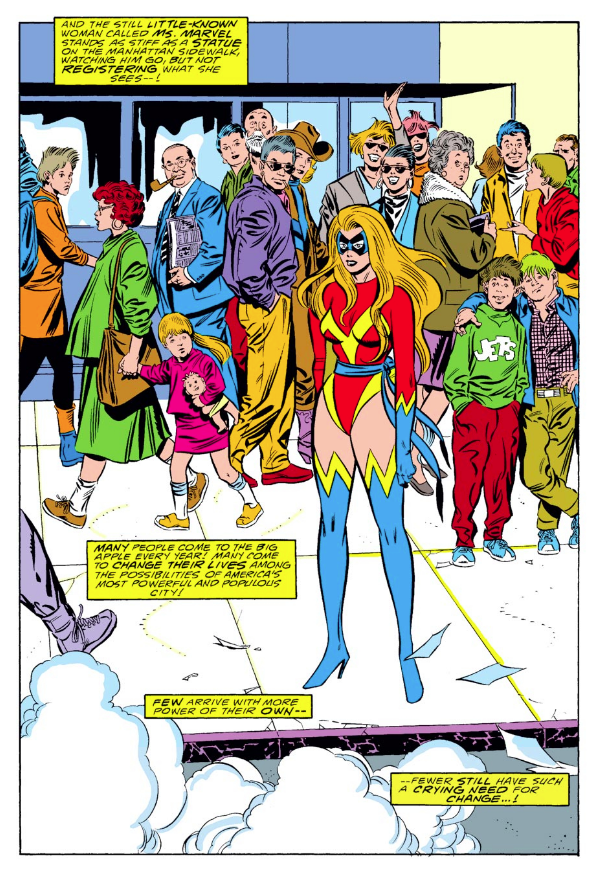 0:54:26-1:22:29: The arrival of Sharon Ventura in FF #306 brings with it discussions of both John Buscema’s appreciation of the opportunity to show regular folks on the street in New York City, and our discomfort with Sharon’s backstory and how fucked up it is that “gang rape as character motivation” managed to actually make it into print, especially during the period where comics were still ostensibly being at least partially targeted at kids. As Jeff puts it, “Steve Englehart, please!” There’s also brief discussion about a never-followed-up-on direction for the Inhumans, and whether or not the book has slipped out of the definition of what you expect from Fantastic Four as a series.

1:22:30-1:34:20: The highpoint of Fantastic Four #307? That would be John Buscema and Joe Sinnott’s artwork, which we both define as an amazing swan song for the team on the book, which is embarrassing because they stay on the book for another couple of issues. But you know who is leaving? Reed, Sue and Franklin who leave the book forever with this issue! (Note: It’s not as forever as people believed at the time.) Meantime, Diablo displays all-new powers, and Jeff overshares about his personal hygiene. But, really, it’s all about the Buscema/Sinnott artwork. Here’s the Franklin panel Jeff was talking about:

1:34:21-1:53:47: FF #308 introduces the racist character find of 1987, Fasaud! But if the mix of Max Headroom and fear of Arabic nations isn’t enough, there’s also a nice moment of confusion on behalf of the Fantastic Four, a moment of betrayal for the Human Torch — even if Jeff and I manage to almost forget to explain what that’s actually about — and a discussion about whether or not Fasaud is Kirbyish in the strangest manner imaginable (and perhaps the 1980s Doctor Doom, in Jeff’s mind). And even more creepiness between Ben and Sharon, and I remind everyone just how creepy Steve Englehart’s Green Lantern Corps run.

1:52:48-2:09:02: Aware of just how long this episode is running, we run through a recap of Fantastic Four #309 and get to #310, where we can’t help ourselves talking about new series artist Keith Pollard — or, if you’re Jeff, Ron Wilson — and the dynamism he brings to what should be a fairly lackluster conclusion to the Fasaud three-parter, despite the sly political commentary just under the surface. At least we can take some joy from the awkward date between Johnny, Alicia and Crystal. Oh, and by the end of #310, the team has an extra Thing to deal with…

2:09:03-2:21:30: As if this run hasn’t been weirdly off-kilter before this point, FF #311 — which is genuinely titled, “I Want To Die!” — ends up being far too dark for Jeff, and it’s surprisingly not because of panels like the above. As we discuss a suicidal Sharon, an unthinking Ben and the respect between monarchs and quite how dark is appropriately dark for this particular superhero comic, we find allusions to Jonathan Hickman and my being far more forgiving to Steve Englehart’s intentions than he perhaps deserves. Maybe that’s how I feel with the darkness.

2:21:31-2:33:17: How to come back from what is probably the most disturbing comics in this entire series? Well, to judge by Fantastic Four #312, the trick is to bring in X-Factor for a guest shot. Sales figures and my childlike sense of joy and wonder fall under the verbal microscope as we witness what appears to be the end of all the neuroses that have been driving the series for the past few issues. Who’d’ve thought that an X-Factor cameo would bring an end to the worst of the soap opera…? 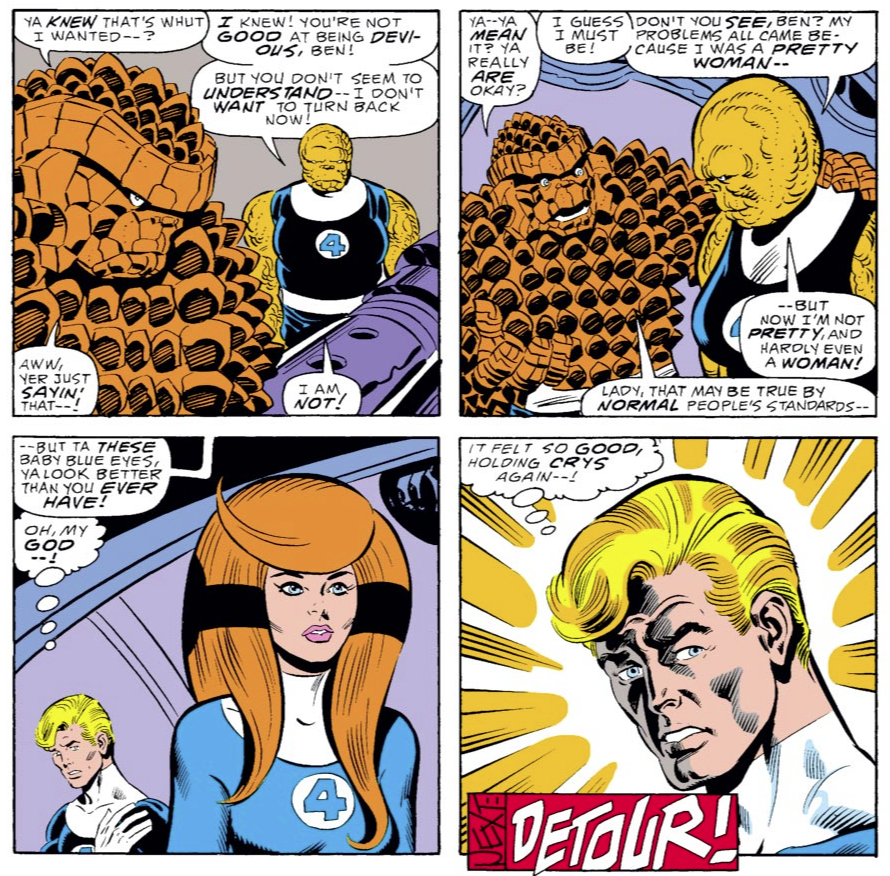 2:33:18-2:44:30: If FF #313 feels like a letdown — and it does — that might simply be because it’s less fueled by emotional dysfunction or bad decision-making than it is good old-fashioned plot mechanics (and, as Jeff points out, a retcon about FF #296, but that’s nothing new). The Mole Man makes a very short return, but to be honest, I’m more concerned about off-model Ben Grimm and Johnny being unimpressed by Ben’s chat-up lines.

2:44:31-end: We wind down to the end of the episode by talking about the ways in which the series has changed in such a short period of issues, and looking forward to what lies ahead, including an appearance by none other than the Beyonder. (We’ll be doing Fantastic Four #s 314-324 next time, for those looking by the numbers.) While you’re waiting for that to happen, feel free to check out our Twitter, Tumblr and Patreon. As always, thanks for being patient with incredibly long episodes, and also delayed show notes. We’re doing it all out of love, even if it doesn’t feel like it at the time, I promise…!