0:01-20:26:  Greetings from Jeff “We Must Talk About Batman’s Penis” Lester and Graeme “Really, Jeff?” McMillan!  We get right to the meat of it immediately, and talk about the appearance of “Lil Wayne” in Batman: Damned #1 by Brian Azzarello and Lee Bermejo, DC’s attempt to do a Mature Readers label featuring characters you can still buy underoos of.  How’d that turn out, you might wonder if you had no access to the Internet until now?  We are more than happy to enlighten you, even as we struggle to keep the double entendres to a minimum.  Also discussed: Dongtor Manhattan; DC’s decision to automatically censor the book; and more.
20:26-33:43: Jeff worries if between this, Ben Percy being yoinked from Nightwing, and the three month delay after the rejection of the art for Justice League Odyssey if DC is returning to some bad habits they had foresworn before Rebirth.  Discussed: all of the above, and Dan Didio getting a bad rap, the artist lineup on DC’s Age of Heroes book not even a year in; whether the Nightwing controversy would’ve landed harder without Marvel’s Vision controversy; what fans want from Nightwing and what DC gives us with Nightwing; and more. 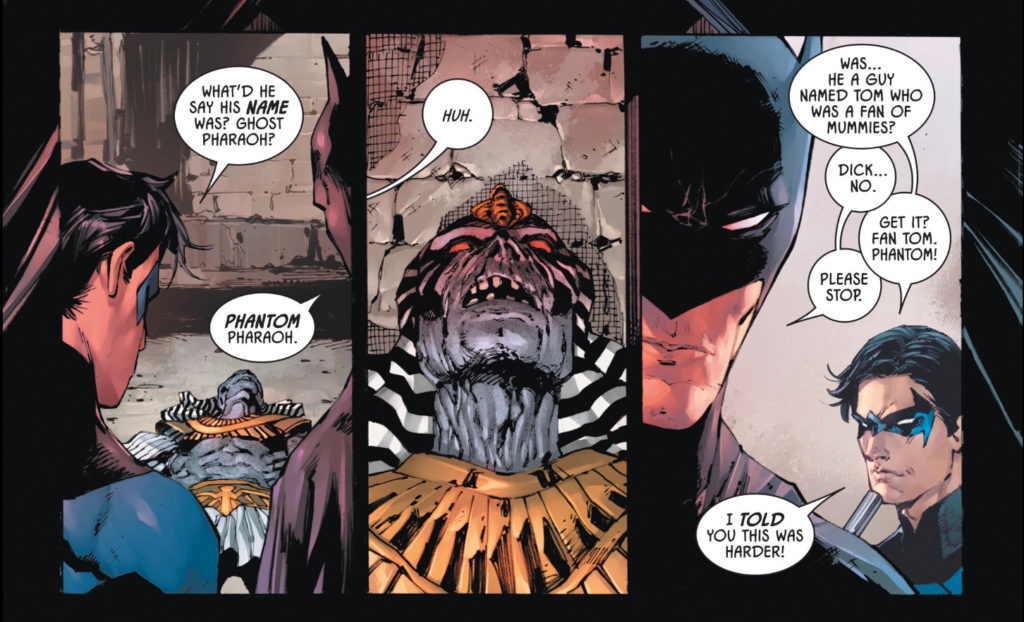 33:43-1:10:35: On what Jeff suspects is a related note, Graeme has a quick spoiler-free bit of feedback about Heroes in Crisis #1 but not before  we discuss what’s going on with Nightwing these days, especially as presented in the pages of Batman #55 by Tom King and Tony Daniel. Then we turn back to Heroes in Crisis and the fates of midlevel heroes we’re roughly grouping here under Wolfman-era New Teen Titans.  From there we go on to discuss the return of Wally West in DC Rebirth #1, and to what extent that return is a signal of a need for “loose” continuity or “tight” continuity, to what extent the DCU “self corrects,” and with a bit of a comparison to what’s going on over at Marvel with regards to their continuity issues, especially with regards to the current Infinity Wars event.
1:10:35-1:21:08: And, relatedly, Jeff picked up Thanos Wins by Donny Cates and Geoff Shaw, and Cosmic Ghost Rider #1 and #2 by Cates and Dylan Burnett, which he thinks ties in to some of these ideas about continuity, what works, and who it works for. 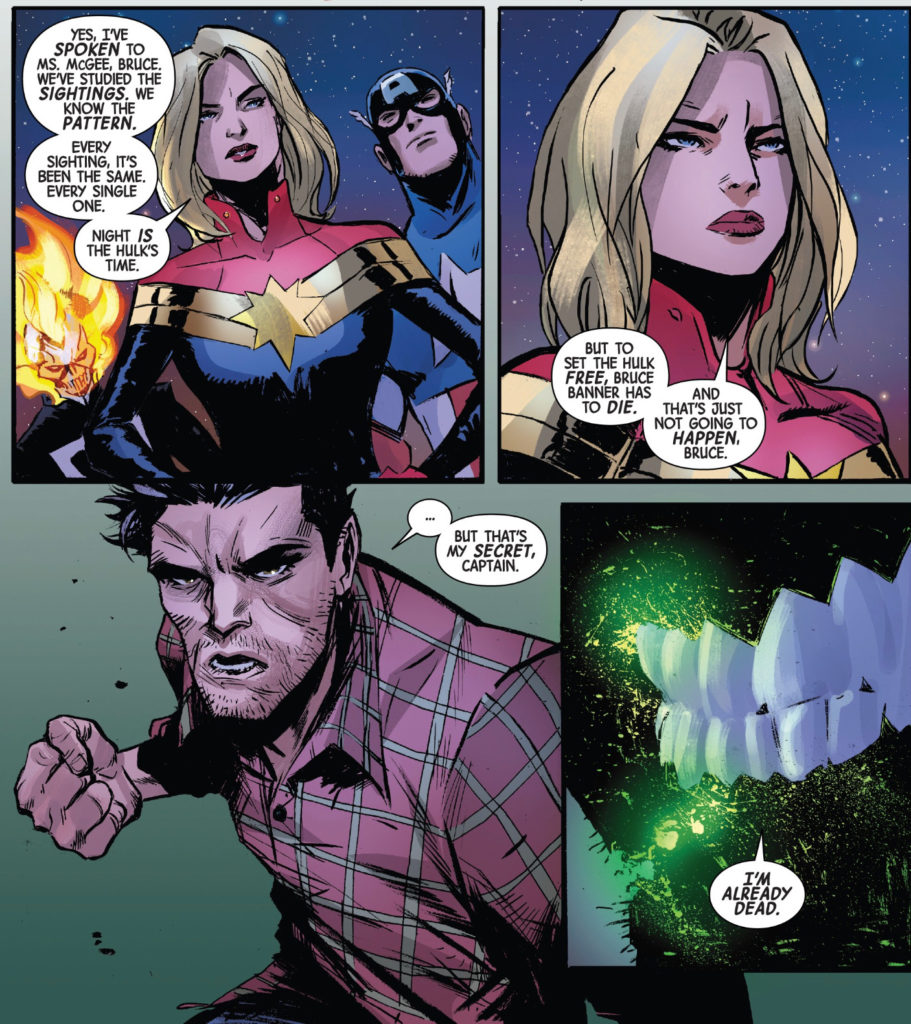 1:21:08-1:39:28: Don’t get him wrong, there are comics that Jeff really liked last week and he runs through them briefly here:  Immortal Hulk #6 by Al Ewing and Lee Garbett; Mister Miracle #11 by Tom King and Mitch Gerads; Avengers #8 by Jason Aaron and David Marquez; Batman #55 by Tom King and Tony Daniel; The Seeds #2 by Ann Nocenti and David Aja; and most of the first volume of Seto Utsumi by Kadzuya Konomoto.  And in celebration of the Killraven Masterworks arriving on Comixology and DC potentially completing the digitization of Kirby’s Kamandi, there’s a brief bit of comparison and contrast between the two.  They start off a little closer than you might think? Come for the comparison, stay for the re-creation of a McGregor-Russell Killraven issue. 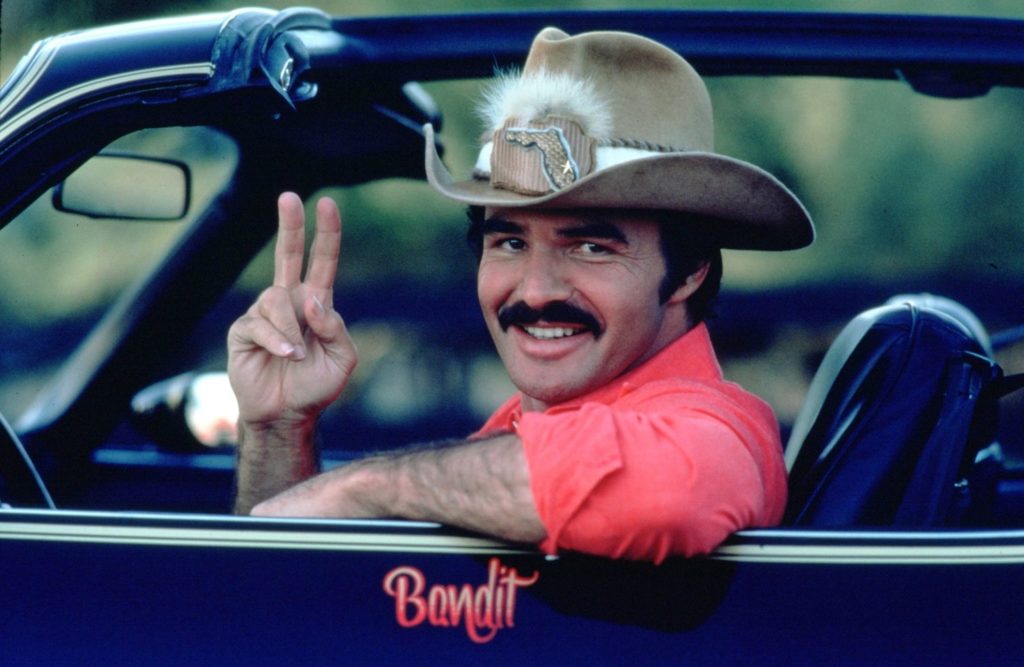 1:39:28-1:47:39:  And while we’re comparing stuff, did you ever notice that Smokey & The Bandit is pretty much just a wacky remake of Vanishing Point? Also, Jeff saw Her and thinks Graeme would like it, but Graeme in inclined to disagree.
1:47:39-2:07:41: And as long as we’re talking movies—the footage from The Joker film! That Captain Marvel trailer!
2:07:41-2:12:13: Closing comments fakeout #1!! Graeme has a quick review of Wonder Woman: Earth One, Vol. 2, by Grant Morrison and Yanick Paquette.
2:12:13-2:15:56: Closing comments fakeout #2! There is a direct sequel to Judge Dredd: Trifecta starting in 2000 AD prog #2100.
2:15:56-end: Closing comments!  Look for us on  Stitcher! Itunes! Instagram! Twitter together and separately: Graeme and Jeff! Matt! Tumblr, and  on Patreon where a wonderful group of people make this all possible, including the kind crew at American Ninth Art Studios and Empress Audrey, Queen of the Galaxy, to whom we are especially grateful for their continuing support of this podcast.  And then we’re out!
NEXT WEEK:  We are…pretty sure we will be back next week?  Stay tuned!!

Before Watchmen: Rorschach was, I think, the series I was least looking forward to in the entire Before Watchmen cycle (with the possible exception of Crimson Corsair, which I’ll get to eventually). I was wary…

At some point in its development process, I can only assume that Before Watchmen: Comedian seemed not only like a good idea, but a coherent one. Despite the final product, I have to believe there…

We’re two issues into Dark Knight III: The Master Race by this point, and I’m even more at a loss about how I feel about the series. The second issue feels even less like a…

PREVIOUSLY, ON THE WAIT, WHAT? ROUNDTABLE: There’s a schism in the Wait, What? hivemind, and Dark Knight III: The Master Race #1 is the cause! Jeff, Matt and Graeme have discussed whether or not there’s…

PREVIOUSLY, ON THE WAIT, WHAT? ROUNDTABLE: We started talking about Dark Knight III: The Master Race #1, the return of the alternate future world that Frank Miller first sold the world back in 1986. While…

Hello, Whatnauts. Graeme here, introducing you to the second Wait, What? roundtable. Yes, we had so much fun with the first one that we thought we’d do it again, but this time, we’re changing our…

Who am I to second-guess a theme column?  While piling up a bunch of stuff I haven’t talked about on the podcast (or didn’t talk about much), I recognized a pretty solid connection in the…