Previously on Baxter Building: After 102 issues (and six annuals), Jack Kirby has left Fantastic Four (and Marvel) midway through a storyline, leaving Stan Lee and the fictional foursome adrift while still having to deal with the triple threat of Namor, Magneto and getting an issue out on deadline. Will our heroes be victorious? And are our heroes really that heroic, anyway? 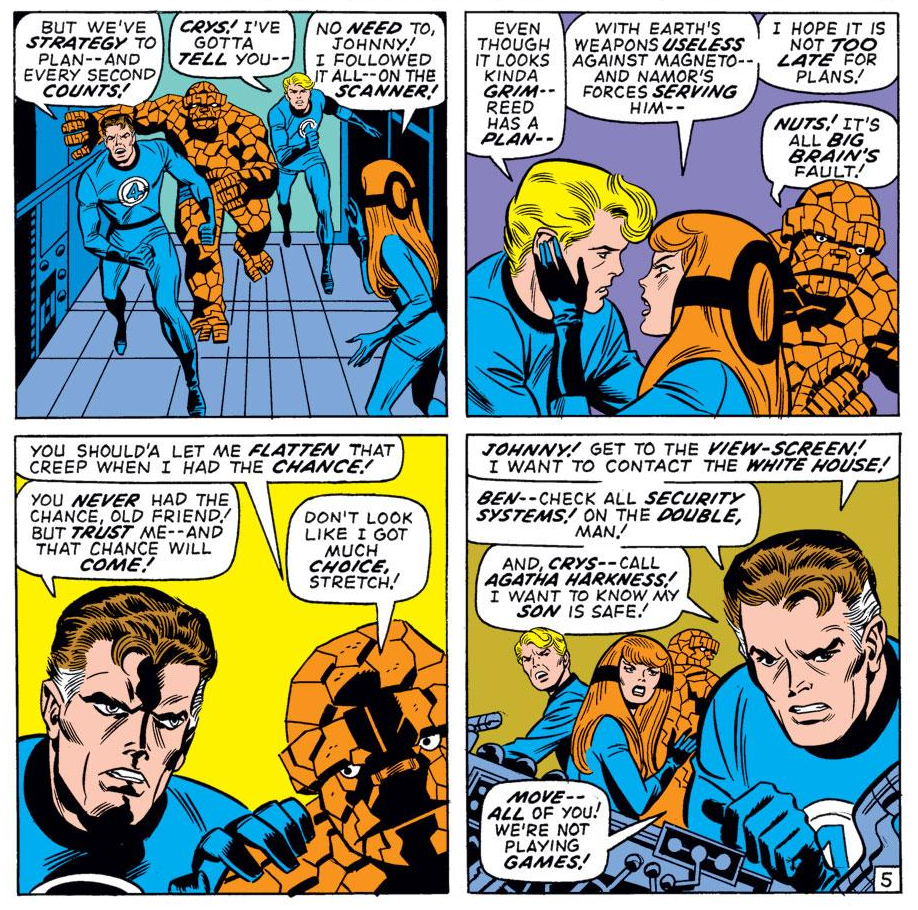 0:00:00-0:06:41: “Everything is so slapdash” is how Jeff describes the issues we discuss in this episode, which are Fantastic Four #103-110 (I say #103-112, which was the original plan, but spoilers: we only get to #110 in the actual episode.) These are the first post-Jack Kirby issues, with art by John Romita and John Verpooten, and John Buscema and Joe Sinnott, and they are… well, I call them absolutely terrible, which isn’t too unfair, to be honest. With Kirby — the series’ main creative force until this point, let’s be honest — gone, how does Fantastic Four fare? Things are looking grim, Whatnauts. With only one “m,” so it’s not a Thing pun.

0:06:42-0:24:06: This is what’s happening in Fantastic Four #103: Magneto and Namor are fighting the air breathers! The Thing is fighting the Sub-Mariner underwater for an astonishingly long time! And inker John Verpooten is apparently fighting penciller John Romita, judging by what’s on the page. We talk about Romita’s attempts to draw the most Kirby pages he can manage, and the ways in which he fails (Prepare yourself for some underwhelming Kirbytech). Learn about Jeff’s fantasy about Stan Lee and Judd Apatow working together, and the way in which the Justice League is less sexist than the Fantastic Four! Discover that the Thing’s lungs work differently from other people! Enjoy my lack of understanding about Atlanteans and what they’re made of! Oh, and Richard Nixon makes his Fantastic Four debut! It’s all here, true believers, but none of it is any good. 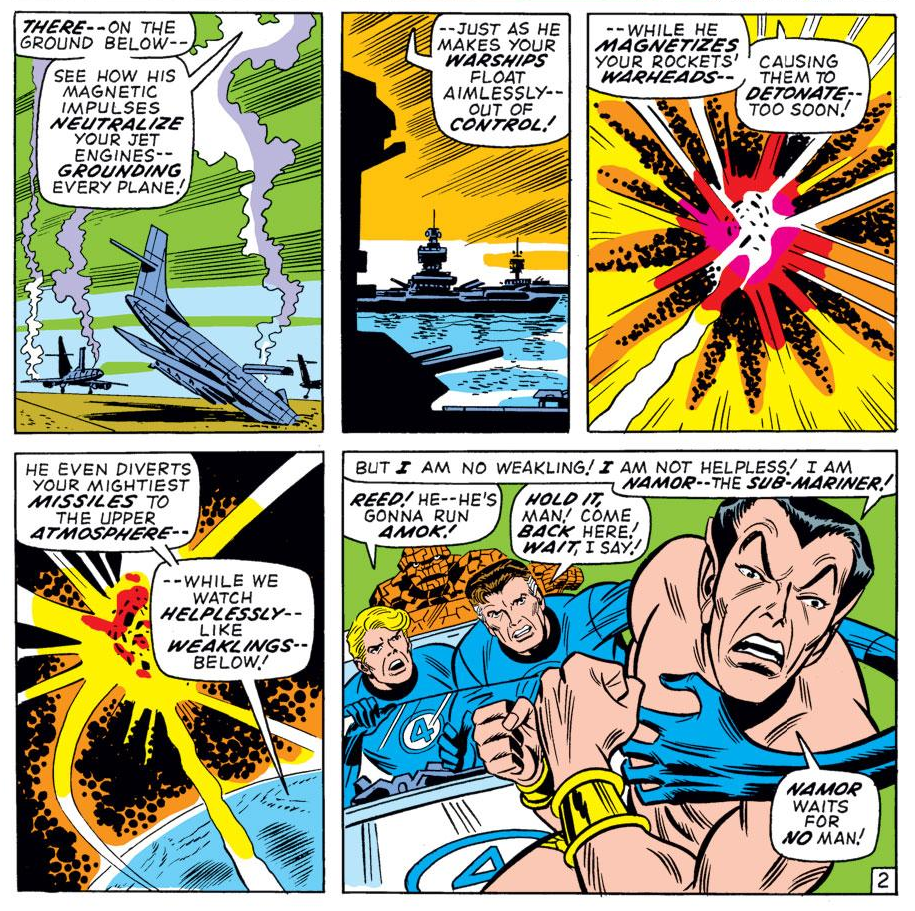 0:24:07-0:43:40: Could FF #104 actually be worse than its predecessor? If you’re judging by the art, then the answer is surprisingly yes, with a second page that we spend a surprising amount of time on, in terms of how disappointing it looks and the skills that Kirby had that Romita lacks — a feeling that’s not helped by artwork that looks unlike Romita’s own work, but very like a bad Kirby parody. Jeff’s description is maybe the best line of the episode: “We’re shooting for a Kirby trope, but on a Don Heck budget.” But don’t worry: the story is almost as underwhelming as the art, with a lackluster plot that features Namor teaming up with the FF, Magneto and the Atlantean army defeating the US military off-panel and between issues, and the power of a cone. Yes, a cone. At least we get a Patented Stan Lee Moral at the end of the issue, even if it bears absolutely no relevance to the story that came before. 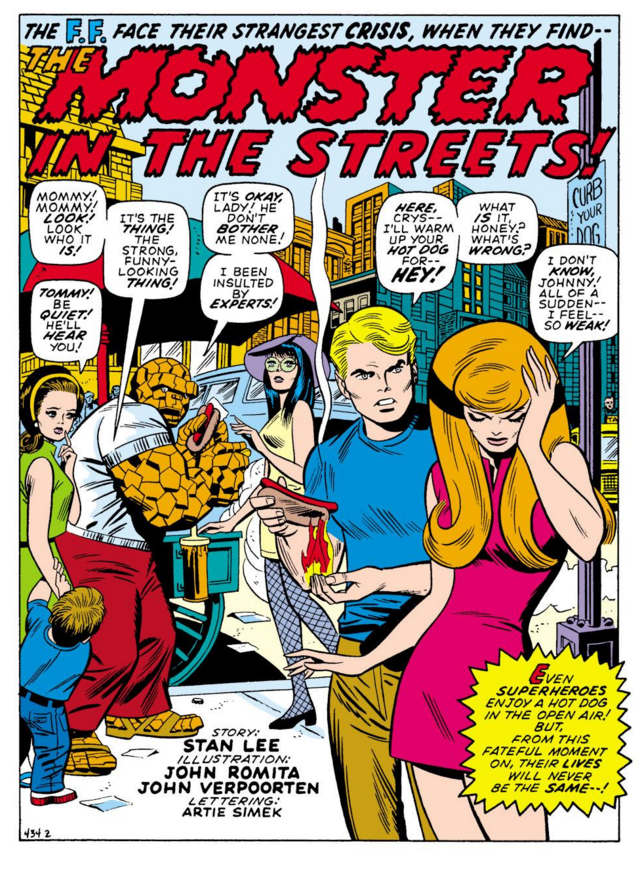 0:43:41-1:07:26: Hey Jeff, what should we expect from Fantastic Four #105 (and 106, for that matter)? “Spoilers, everyone: what’s coming up is a two-issue adventure […] in which a brand new villain is launched into the FF canon, and unfortunately, if you thought Kirby was getting underwhelming, here are two issues in which the villain is called ‘The Monster’ and is an amorphous blob with no distinguishing details whatsoever.” Sadly, it’s true — although at least next issue the monster gets a name — but there are highlights to be found this time around, including two wonderful sequences with the FF enjoying their downtime. 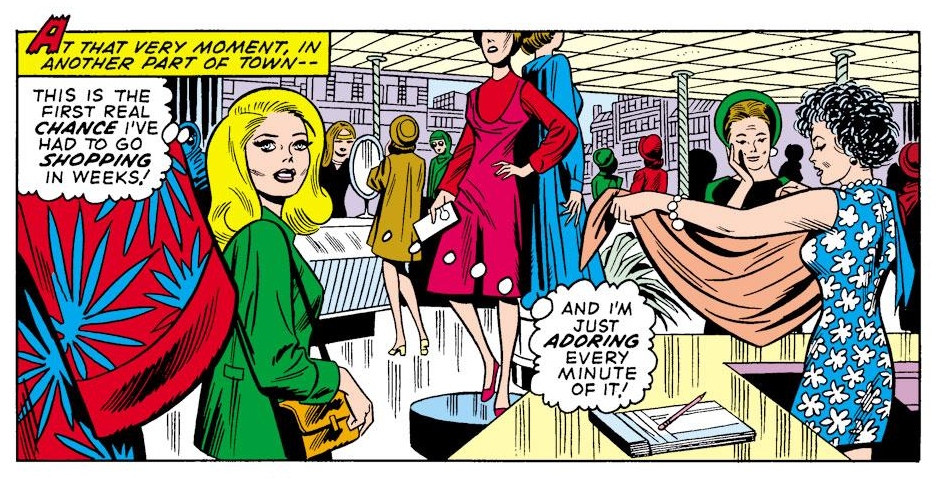 After dealing with the leftovers of a Kirby-launched plot, this feels like Lee and Romita trying to take control of the title, including an astonishingly quick departure for Crystal and the latest in a long line of “Can the Thing become Ben Grimm again?” subplots — but this one, at least, will have more of an impact than usual. For better or worse, the book is finding some sense of direction again, even if it’s not one that’s particularly exciting (but it does, at least, underscore the “Reed Richards is a supervillain” subtext of this episode). All this, plus Jeff’s head canon about Reed Richards and Ben Grimm’s relationship. But can we at least get a round of virtual applause for neither of us using a “monster on the streets, [x] in the sheets” joke throughout this entire read-through? 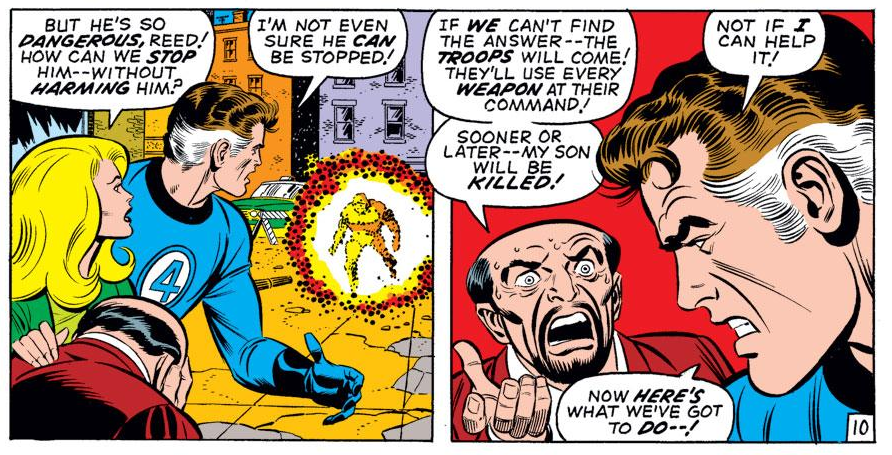 1:07:27-1:25:16: We’re all familiar with the concept of “play fair” mysteries, but Fantastic Four #106 brings up the “entirely unfair” mystery concept, wherein Stan Lee clearly has solved the secret of the monster between issues, leading to a contradiction of what was established in the previous issue — as well as a contradiction of the name of scientist Dr. Zoltan Rambow. (Now he’s “Philip,” disappointingly.) But is that as unexpected as the Human Torch’s newfound Iceman-like superpower? You can tell that Stan’s in charge now, because this issue is the finest example of his Reed Richards Is The Greatest Human Who Has Ever Lived story yet, as Reed harasses his way to victory throughout the entire story. Yes, MRA Reed manages to defeat Larry Monster (That’s right, his name is “Larry.” I didn’t say that Stan’s answer to the monster’s mystery was a good one) purely by berating everyone around them and being demonstrably better than them. If that doesn’t make good drama, what does…? 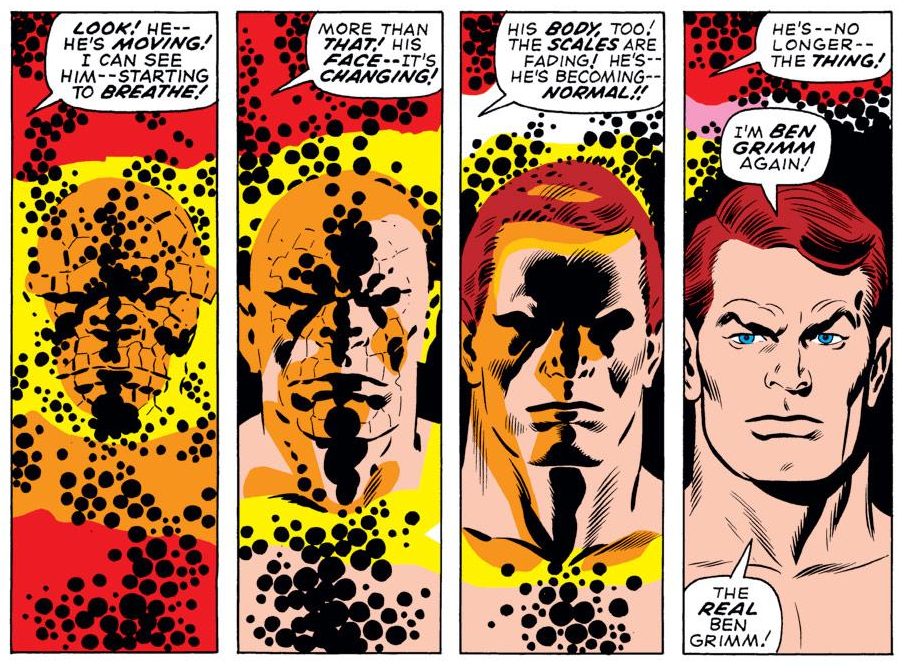 1:25:16-1:40:08: John Buscema arrives to make FF #107 the best issue in awhile — not only the best-looking (but it really is; Buscema and Sinnott are a great team, and Buscema has a dynamism in his work that Romita didn’t), but also the best in terms of story as well, including some surprisingly subtle work when it comes to Ben Grimm not being exactly the man the readers want him to be. Don’t worry, though; it’s not all good stuff — you would be surprised how nervous editorial captions can be, as you’ll discover, and how passive aggressive next issue captions can be. (Very.) 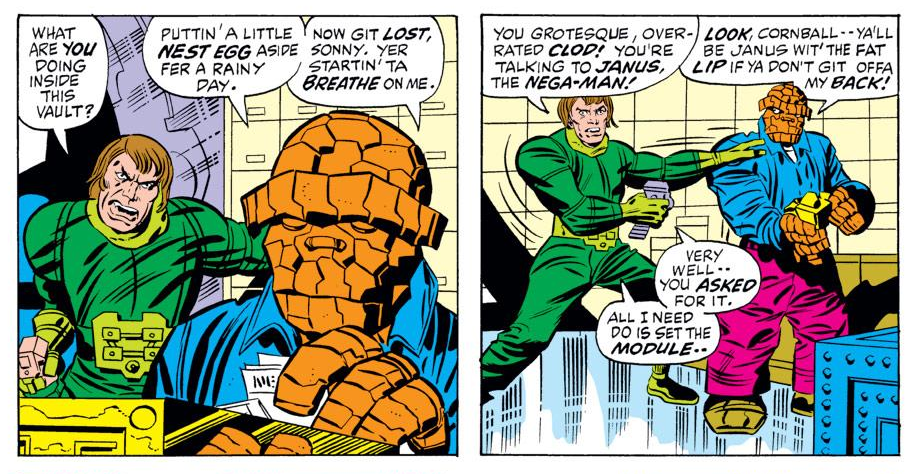 1:40:09-1:49:36: Hey, Jack Kirby’s back! Kind of! Yes, Fantastic Four #108 is the infamous “using leftover Kirby pages to retrofit an origin for a new villain” issue, as Kirby’s rejected original pages for #102 (apparently) are propped up with Buscema/Sinnott/Romita work and Stan dancing around with some dialogue tricks to try and make it all fit. The result is… a very strange one, with it not really adding anything to anything, not least of which the backstory of Janus, the Nega-Man. Jeff’s theory is that this is essentially a fill-in issue to buy the creative team some time, and, really, that’s what it feels like. It’s kind of tragic that the last “new” Kirby in the entire series is so lackluster. 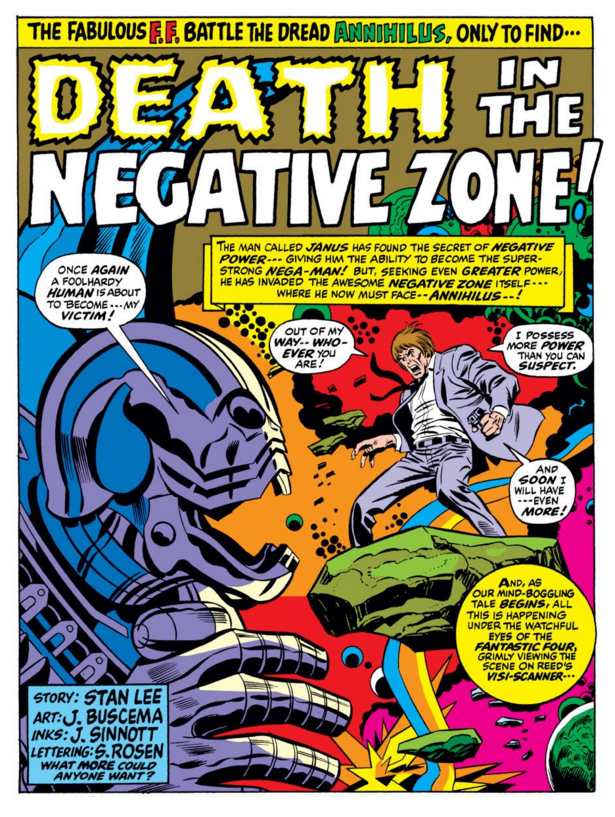 1:49:37-1:56:29: We start FF #109 by talking about the way in which Buscema and Sinnott fit the series far better than Romita managed, and also the way in which the previous issue’s breather really helped out. The series continues its upswing with this one, at least in terms of what Jeff calls the “hustle” of events, but also in the downfall of Janus in a manner in which you least expect it. (Turns out that being an asshat has its downfall, who knew?) As Jeff calls it, the “best TV dinner ever,” because it’s all warmed-up leftovers — but not as much as the next issue, because, hoooooo boy, next issue. 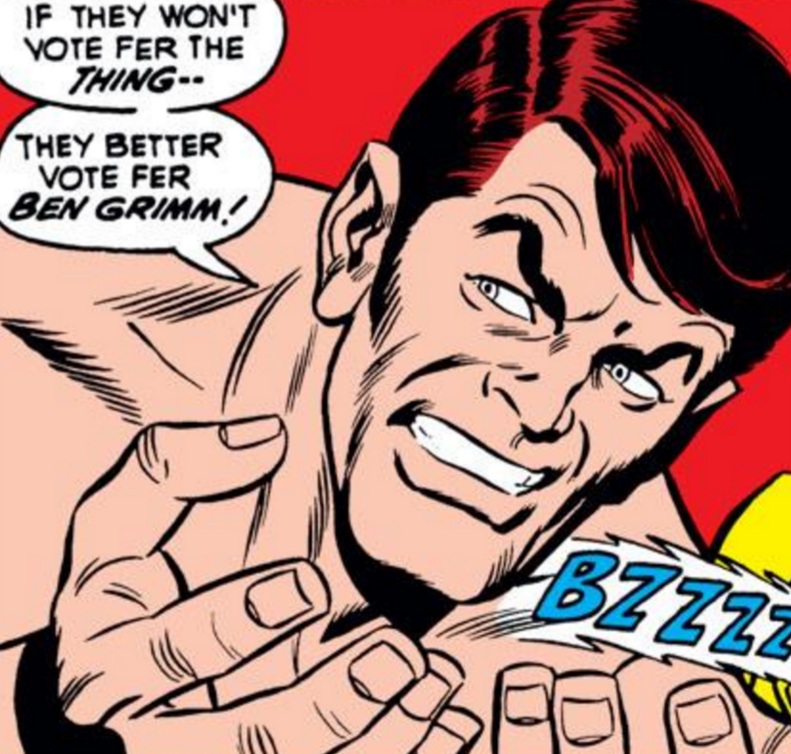 1:56:30-2:06:41: “What can we say about this issue?” I ask about Fantastic Four #110, and surprisingly neither of us answer “Well, it’s a re-run.” But it is a re-run; Reed is adrift in the Negative Zone, and has to be saved by the rest of the team — complicated by the fact that, in a mild twist, Ben has turned into a villain (Is this the ultimate “Stan pass-aggs Kirby in the subtext of the comic” twist? For once, Jeff and I are in agreement. As Jeff puts it, this is the issue where Fantastic Four becomes a Fantastic Four tribute band, and that’s not something that we’re going to recover from anytime soon. Sure, there’s a lot to enjoy in terms of the way the covers are performed, but remember that feeling of breathless innovation that we all felt in the heyday of the Kirby run? That’s gone for quite some time, sadly.
2:06:42-end: We leave things with a bit of a cliffhanger, with Ben having quit the team (again!), and that will come to a head and then some in the issues we’ll cover next episode, Fantastic Four #111-118, which also feature the first Stan Lee-less issues of the series. Yes, it’s all change from here on… in terms of creative teams, at least (In terms of types of stories, not so much). The next year’s worth of Baxter Buildings is going to be an interesting one, as we see how well the team and the book deal with the loss of their guiding lights. (Not very, really.) As we say goodbye, we remind you that you can find us on Twitter, on Tumblr and on Patreon, and Jeff forgets that he has a catchphrase for the show. Thank you as ever for listening and reading the show notes. Jeff, myself and Larry Monster appreciate it greatly.