Previously on Baxter Building: The Thing has gone bad (again)! And he’s not the only one — unlike Benjamin J. Grimm, who has the excuse of the seeming shock of being given the ability to transform between his human self and his rocky exterior, the Fantastic Four series has also soured following the departure of Jack Kirby, as Stan Lee and John Romita, followed by John Buscema, try to get their bearings and work out quite what the new normal is on the series that used to call itself “The World’s Greatest Comic Magazine!” 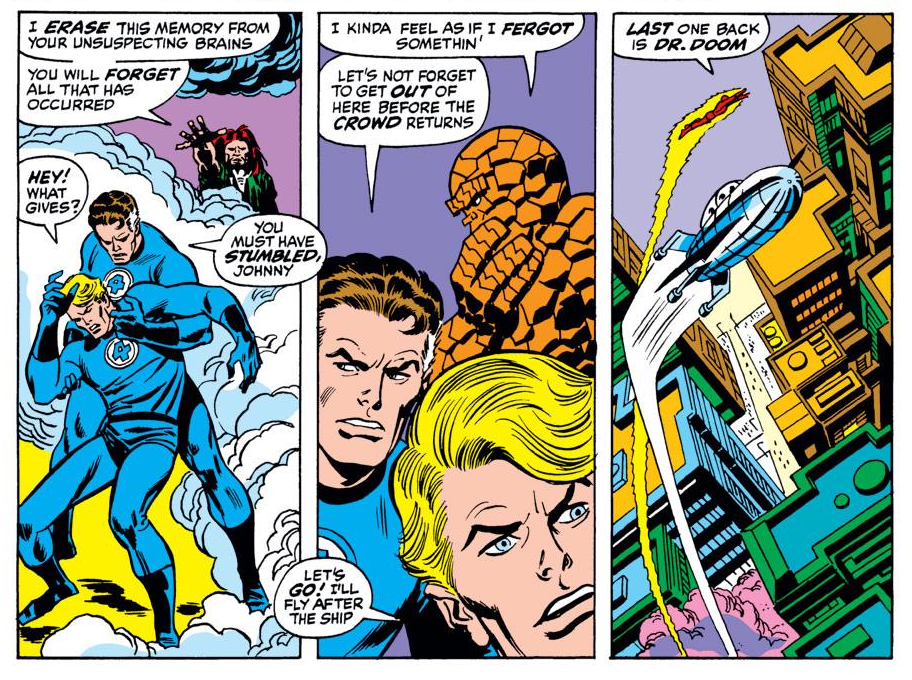 Programming Note: For some reason, the Skype connection on this call was weird, so the audio comes in and out a bit; it’s not really inaudible at any point, but there is a little bit of buffering/stuttering at parts. Sorry!

0:00:00-0:20:24: In what is likely to be our longest cold open ever, we talk about 2008’s Fantastic Four: The Lost Adventure, in which contemporary Stan Lee re-dialogues Jack Kirby’s surviving pages for Fantastic Four #108, which was originally intended to be FF #102, with new material by Ron Frenz and Joe Sinnott to fill in for the missing material. Neither of us are that impressed, nor can we really see much point in it existing beyond “Let’s try to make some money,” but we are both excited by Stan Lee’s introduction of what can truly confound Marvel’s First Family in the modern era.

0:20:25-0:39:41: We waste almost no time rushing into the first of this episode’s issues, Fantastic Four #111. “Even as you sound as though you’re not being generous at all, you’re actually being too generous” is Jeff’s assessment of the fact that I don’t immediately complain about the opening narration, but despite the generally disappointing nature of this issue, we focus in on Buscema’s art, which alternates between some fine figure work and being too crammed to allow for that work to shine (much to Jeff’s sadness when it comes to Ben’s choice of stolen vehicle).

Meanwhile, there’s a brewing subplot that causes a schism between Jeff and myself! Is Stan Lee not going far enough in establishing that something is up as New York turns against the FF, or is he going just far enough without tipping his hand?

0:39:42-0:59:44: There’s no way around it: FF #112 is a mess, and it’s not just because Stan Lee forgets how the Hulk works in this apparently long-awaited rematch between the Hulk and the Thing (although he does); this is the first issue from the era in which Marvel inexplicably decided to do away with punctuation, making the entire comic almost unreadable. It’s not all bad, though — we do get to see Reed Richards actually try to kill Johnny, which leads us into a discussion about whether or not Stan Lee actually understands interpersonal conflict (He doesn’t). The problems with Buscema’s art being strangely cramped and badly paced continue, with some of the strangest choices you could imagine for a fight issue like this, with almost all of them bad ones even though they allow Jeff to make a Popeye comparison. All this, plus a cliffhanger that is entirely unbelievable and poorly sold by all involved: Is the Thing dead?

0:59:45-1:19:03: Guess what? Fantastic Four #113 reveals that the Thing isn’t dead! It turns out, he’s not even evil anymore, thanks to a breathtaking plot development that sees the book essentially drop that plot because it was going nowhere (We talk about what it means that the heel turn that seemed to be Stan’s way of dealing with Jack Kirby’s sudden departure itself ends so suddenly, but don’t expect any resolution; in classic Baxter Building manner, we distract ourselves). That leads Jeff into his theory about why this makes early FF inspirational to future creators as opposed to bitterly disappointing. Plus: Just an issue after Johnny almost plunged to his death, he does it again, this time of his own volition, the Watcher shows up to be amazingly vague (and prompts Jeff’s best accidental Bill Cosby impersonation ever), Agatha Harkness also offers an amazingly vague threat, and the FF almost get arrested. It’s an issue that I love, and Jeff… doesn’t… but trust me: this is the start of the return of The Good Stuff to the series. No, really.

1:19:04-1:33:32: It really is the end of an era, as we reach Fantastic Four #114, Stan Lee’s last issue as writer. He goes out on… top…? Well, there’s certainly a nice twist that we both appreciate, but before we get there, Jeff and I disagree over John Buscema’s design for the villain of the piece, the Overmind, and whether it’s Kirby-influenced, or simply missing the point of Kirby designs altogether. While I do apologize, after the fact, that Jeff and I fall apart with giggles about the lack of punctuation, surely all should be forgiven after the one-two punch of Jeff’s idea for a Reed Richards Tumblr and my dramatic reading of Stan Lee’s magical spell casting. (But don’t listen to Jeff’s pleas for a ridiculously overlong EDM thing.)

1:33:33-1:56:59: Continuing the accidental theme for this episode, Jeff and I disagree about the value of FF #115’s extended origin sequence for the Overmind — it’s thirteen pages of relatively generic space fantasy, including a planet called “Gigantus,” which is apparently very large — even though we both agree that this issue has a genuinely great climax, as (spoilers!) Reed Richards goes rogue in a wonderful sequence that really lands in a way that very little has done for quite some time. Ignore the backstory (although enjoy Jeff’s theory about Stan Lee’s space debauchery versus John Buscema’s fantasy visuals), feel the conflict between whether or not we really needed all of it for the rest of the story to work, especially given that the origin doesn’t actually explain his plan or motivation what the Overmind has been up to for the last couple of issues. But if the Overmind caused this rift between Jeff and myself, his plans run aground with the next issue… 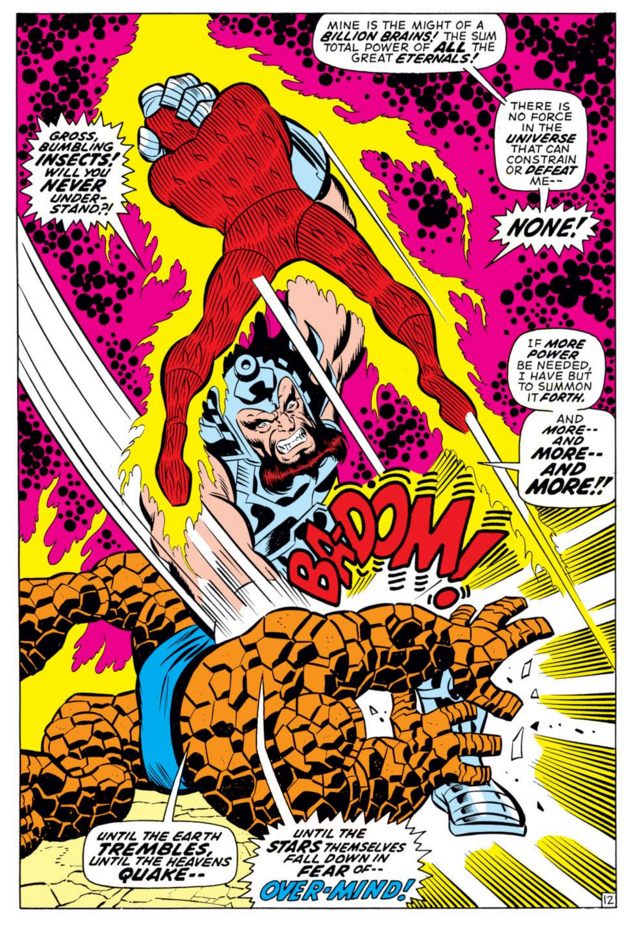 1:57:00-2:17:16: “#116 really does work for me, really really strongly,” I say, and Jeff agrees. What’s to love? A lot: seeing the rest of the FF be capable without Reed, Doctor Doom joining the team for the first time (albeit temporarily), some great Buscema art (including a full-page splash, which Jeff points out is the first non-title page splash in quite some time) and Goodwin offering up some great characterization. It’s not a perfect issue — I’m not a big fan of the climax, which comes out of nowhere as far as I’m concerned, but Jeff’s a far greater fan of the Marvel Universe mechanics at play here (Even now, I reject the Ultimate Nullifier analogy, mind you), and both of us agree that it could have actually used a second issue, oddly enough — but, really? This is the best issue of Fantastic Four in a long time. No wonder that Jeff describes it as the very model of “the post-Stan Marvel comic book of the 1970s.”

2:17:17-2:31:36: Because Fantastic Four #s 117 and 118 are obviously one overlong issue that has been cut in two — and because we’re already well over the two hour mark — we rush through the two as quickly as possible. To be honest, that’s all they really need as they’re upper-level filler featuring Diablo and the return of Crystal, both wrapped up in a forgettable plot dealing with a South American country under threat of supernatural dictatorships. Not for nothing does Jeff call these issues “phenomenally underwhelming,” although there is a great back-up in #118 that almost redeems things, thanks to an unnecessary but entertaining introduction of an alternate world where Reed Richards is even more of a problem child.
2:31:37-end: And once again, we reach the end, after covering an impressive nine issues’ worth of content (and one of them was almost double-sized!). Next time around, we’ll be covering Fantastic Four #119-126, and seeing if the uptick in quality sticks around. Until then, you can find us on Twitter, Tumblr and Patreon, and if you come back here next week, there’ll be a regular Wait, What? waiting for you. As almost, thanks for listening and sticking through these show notes. As a special reward… 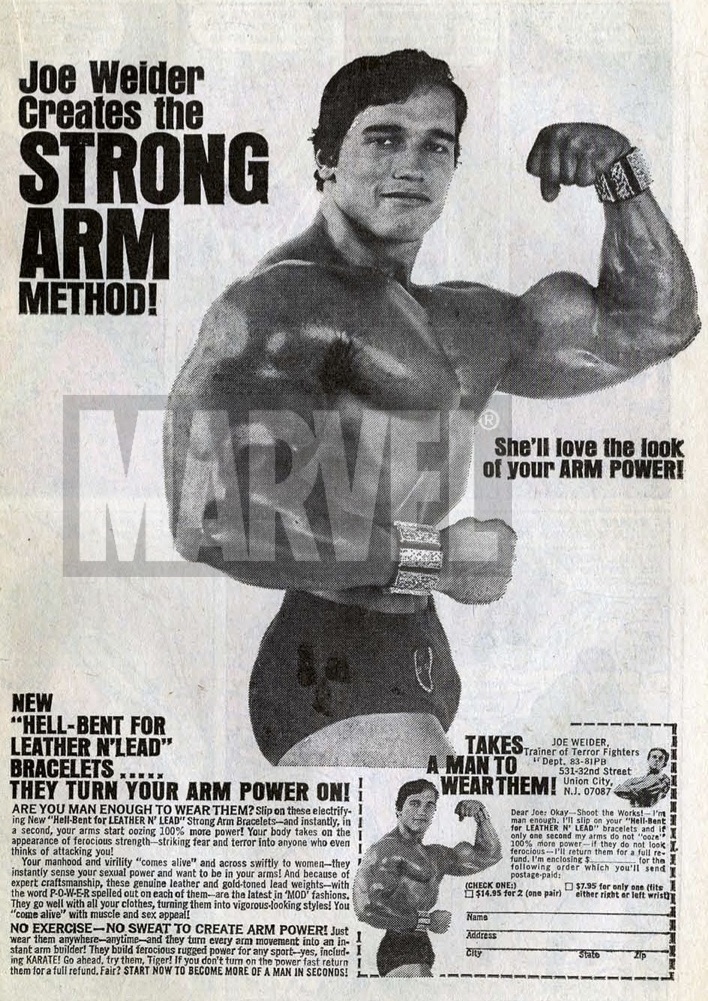 No, no need to thank us.