Previously on Baxter Building: The Fantastic Four almost died on a mission out in space, but because these are monthly superhero comics, they instead ended up younger than they were when the series started — except for Johnny, which will never be mentioned again — and also more powerful, because comics.

Editorial Note: If you’re reading this on Monday night, two things: Firstly, there are no images, and secondly, this should’ve been up hours ago. Both are related to how busy today has been, and I apologize profusely. There’ll be images in this tomorrow, honest! (As long as tomorrow isn’t as crazy as today!) Tuesday update: Images are in! But they’re from the GIT Corp. DVD scans, hence the Marvel watermark on a couple of them.

Look at the Joe Sinnott redraw on that Sue in the first panel!

0:00:00-0:12:29: We start this episode off by talking about how unusual the issues we’re going to cover this episode are. It starts off normally enough with six issues of Marv Wolfman, Bill Mantlo and John Byrne, but then things get pretty off-book for the series when Doug Moench and Bill Sienkiewicz show up as the new regular creative team, ditching the cover band approach to the comic for better or worse. (Spoilers: The jury’s still out on that one, but it’s probably worse.)

0:12:30-0:25:06: Before things get strange, Marv Wolfman keeps up a tradition by leaving the series midway through a continuing plot line, as he disappears halfway through a storyline spanning Fantastic Four #215-216 that sees Jeff and I wonder if a giant penis head can also look like a butt, whether Star Trek is an appropriate place to lift inspiration for an FF story from, and whether Reed is the most irresponsible genius ever. (Yes.) 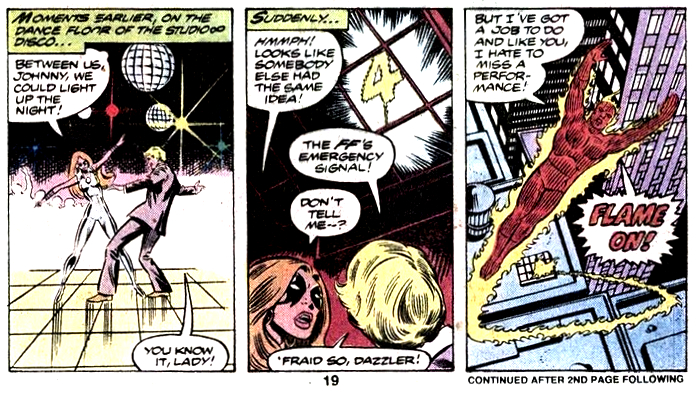 0:25:07-0:30:48: In a surprise move, the one issue that deals with the end of HERBIE proves to be the best issue of this episode, as FF #217 sees an unexpected “This Man, This Monster” riff and the “Why didn’t anyone do more with this?” pairing of Johnny Storm and Dazzler. Genuinely, this issue is so much fun, it almost makes up for the fact that I kept saying “HERBIE goes bad” and not “HERBIE goes bananas.” What was I thinking?

0:30:49-0:37:11: When Jeff uses the phrase “They can’t all be winners!” to describe Fantastic Four #218, he’s being generous, although much worse is around the corner. At least this issue plays out like a weak Marvel Team-Up, complete with Spider-Man guest appearance and the discovery that the Trapster clearly works out far more than we ever anticipated. (Although, to be fair, I don’t think anyone really gives much thought to how much the Trapster works out.) 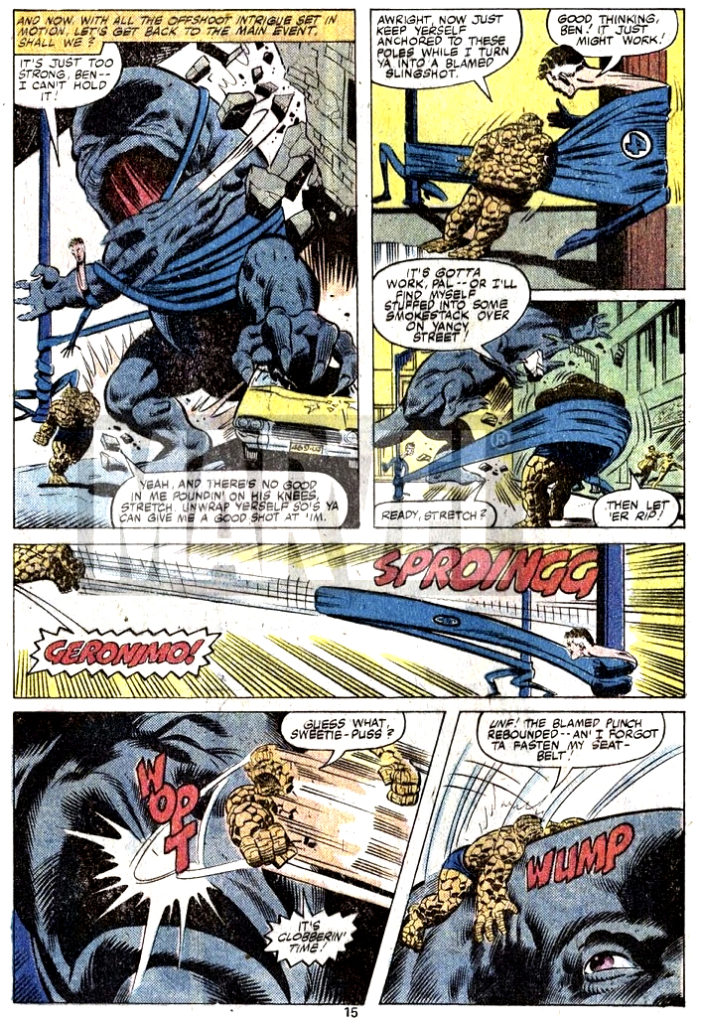 0:37:12-0:45:37: A sign of what’s to come shows up in FF #219, which sees Moench and Sienkiewicz offer a fill-in that has some staggeringly bad pacing and overly busy pages, while offering arguably the most boring Sub-Mariner story this series has seen yet. Which, let’s be honest, is really saying something. “There is no need to read this comic,” Jeff says, and he’s not entirely wrong, sadly. 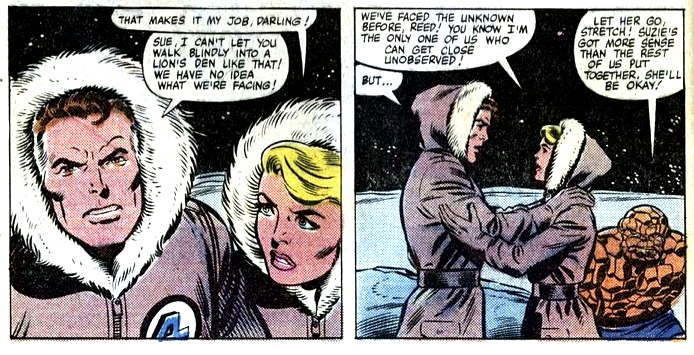 0:45:37-0:53:06: John Byrne’s first writing credit on the series — in Fantastic Four #220-221, which he also draws — feels like an annual split between two issues, but it’s a nice little two-parter that shows that he understands the basic appeal of the series. “There’s a lot to like in here,” as Jeff puts it, not least of which is seeing Byrne flip what has become a FF cliche around to make it seem oddly new and charming. Is this a sign of things to come?

0:53:07-1:13:38: FF #222-223 sees Doug Moench and Bill Sienkiewicz take over as the regular creative team of the book, and we’re thrilled about this, if “thrilled” means “struggle (and succeed!) in finding upsides.” Meet creepy Franklin Richards, and then magical, creepier Franklin Richards, as Nicholas Scratch returns, Agatha Harkness says goodbye and Salem’s Seven make everything slightly better. We talk about the influence of fandom and how much it plays into this run, Bill Sienkiewicz seemingly playing against visual type wherever possible — not in a good way — and Jeff explains the purpose of a character making a cameo in this storyline far more thoroughly than the story itself does. Oh, and we come up with the best Chris Claremont Fantastic Four annual that never happened.

1:13:37-1:24:14: Jeff tries his hardest to defend the Garth Marenghi-like tendencies of Doug Moench in Fantastic Four #224-225, two issues that feel like the most Marenghi FF yet. There’s a lot of apocalypse going on, but also a lot of pretension, a surreally out-of-nowhere Thor and Odin cameo, the most lackadaisical Fantastic Four ever, and a threat that manages to undersell itself and the fact that he’s basically Benevolent(ish) Vandal Savage, and yet none of it comes across as being particularly interesting. 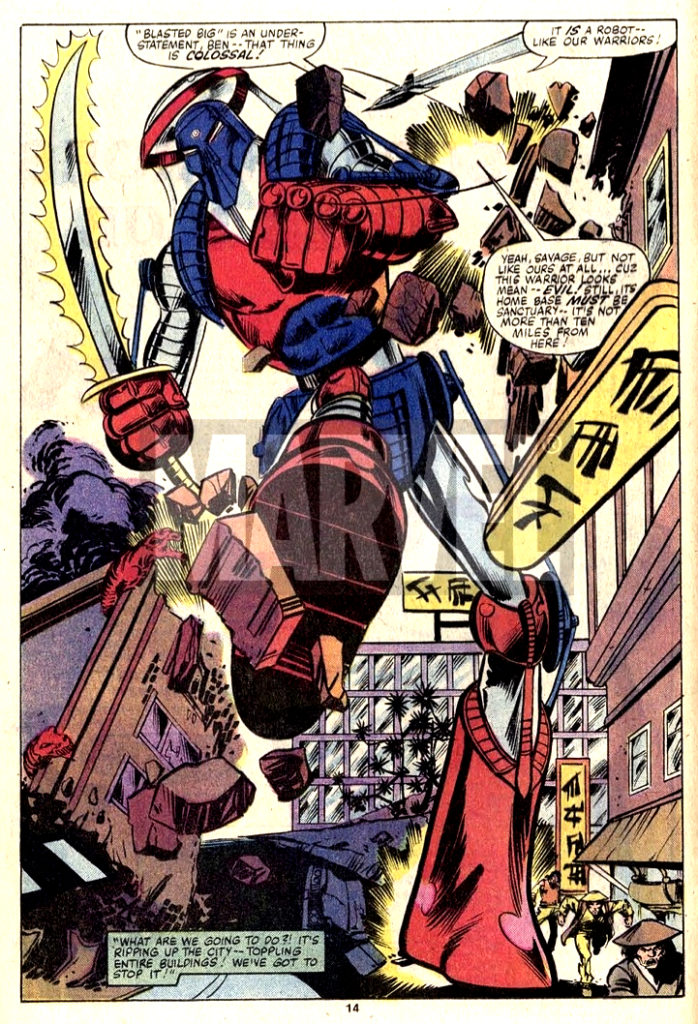 1:24:15-1:31:57: FF #226 is described by Jeff as “the best,” but I can only assume that he’s being sarcastic. Moench decides that it’s time to wrap-up loose ends from Shogun Warriors, but he’s hobbled by two factors. Firstly, Marvel clearly doesn’t have the rights to the characters anymore, so you won’t be seeing those giant robots this time around. Secondly, Bill Sienkiewicz is not interested in playing to the cues Moench is giving him. “It’s rank,” Jeff goes on to describe it as, and… well, he’s not wrong. Looking for some upside, we end up talking about the number of times Moench and Sienkiewicz talk about Moon Knight in these FF issues (It’s a lot) and guess about potential reasons why.

1:31:58-1:35:24: Fantastic Four #227 is “everything you could hope a story called ‘The Brain Parasites’ could be, except good,” as I describe it, and I stand by it. On the plus side, even as the story gets ridiculous (Prehistoric monsters devolve people, including Sue, into monsters!), the art gets a nice bump when Bruce Patterson shows up and brings out an entirely different side to Bill Sienkiewicz than we’ve seen in these pages so far. 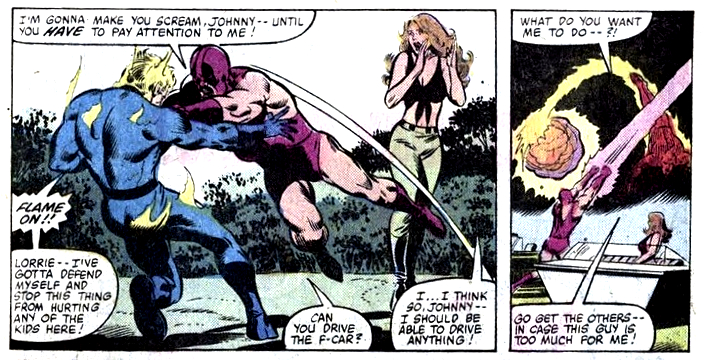 1:35:25-1:41:44: Joe Sinnott returns to do full finishes in FF #228, so the book looks better despite some by-now-unsurprising bad layouts from Sienkiewicz, but that’s not the only problem with the issue. “I can’t even wrap my brain around what’s happening,” Jeff says, and perhaps that’s because we get an issue where Johnny is impressively callous, while Franklin’s childhood trauma is given purple-leotarded form. No, really; that’s not an exaggeration. We’re firmly in the era of some impressively bad comics right now.

1:41:45-1:56:21: How best to describe the three-parter than concludes the Moench/Sienkiewicz run in Fantastic Four #229-231? “It’s pretty bad,” Jeff says, and that seems fair enough. Combining everything we’ve come to expect from this creative team — uninspired villains, bad design choices both in terms of costuming and page layout, and some brand new, immediately unforgettable characters who pretend that they’re important while they’re on-panel — this really is the perfect example both of what the previous few issues of the title had been like, and also the best argument for why this creative team wasn’t suitable for the series. On the plus side, Jeff does coin the phase “I must fuck up their Kool-Aid,” so it’s not all bad, and he did appreciate them trying to do an epic, as bad as it turned out to be, which leads us to…
1:56:22-end: …A discussion about the strangeness of the Moench/Sienkiewicz run as a whole, and the ways in which it almost cleared the creative palate before John Byrne comes on board. If nothing else, this is a run that feels like something other than an attempt to recreate the Lee/Kirby thrills on an ever-decreasing scale of success, and even though it was more of a creative failure than a success, something should be said about that. Admittedly, what it seems to say to both Jeff and I is that we’re really ready for Byrne to take over the series with the next issue — and the next episode of this here podcast, which will cover #232-237 of the series. That’s how we’re going to be starting 2017, so you should join us for that. In the meantime, you can find us on Twitter, Tumblr and Patreon, and also accept my apologies for this post being quite as late as it is — today has been ridiculous behind the scenes at Wait, What Towers (Portland Outpost). Normal service will be resumed soon…!