Previously on Baxter Building: Sue Richards no more! No, wait; I mean Invisible Girl no more, because after facing off against Psycho-Man and the Hate Monger, Sue has become the Invisible Woman because she did… something mysterious off-panel…? Oh, and John Byrne is running out of steam and then some as we speed towards the end of his run.

Important Note: There is an increasing amount of static on Jeff’s side of the call from about 20 minutes in until about 40 minutes in. We’re sorry! I’m also sorry these show notes are up so late: Blame work deadlines and me disappearing to see the eclipse.

0:00:00-0:06:23: A brief introduction lets you know that Jeff and I are talking about Fantastic Four#s 285-295 this time around, which closes out the Byrne run, and we talk for a second about how disappointing the issues are overall (“I think it’s fair to say that he is not going out with a bang,” as I put it) and the editorial collateral damage of Byrne being forced off the book. And then things really get going with… 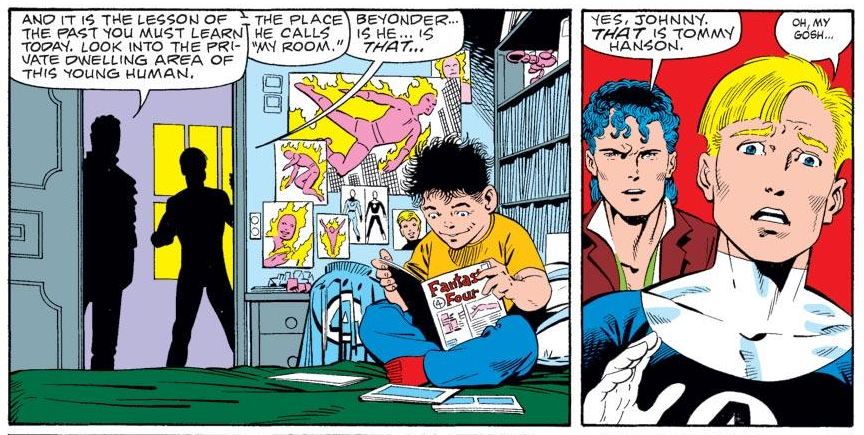 0:06:24-0:24:18: …Fantastic Four #285, in which John Byrne clearly thinks that he’s producing a work of deep emotional value, despite it being a clumsy, cloying self-satisfied mess. While it’s obvious what he was going for, the lack of… well, any real emotional value whatsoever in the story, combined with an impressively misguided attempt at an uplifting ending, collides to make a disaster of an issue. Did Tommy die for nothing? Well, it depends if you consider “John Byrne’s ego” to be nothing, but basically, yes.

0:24:19-0:42:40: FF #286 brings Jean Grey back to life in an X-Factor prologue that manages to get over quite how boring those initial issues of that series was, while also bringing in a couple of uncredited guest creators so upsetting to John Byrne that he takes his name off the book. As you might expect, Jeff and I were both thrilled by an issue that evokes the spirit of Bob Layton, but even as we try to ignore the static, we imagine how patient Hercules must be when he’s not sexually harassing the women around him, discuss the apparently terrible memory the Avengers and Fantastic Four have for faces — they have met Jean Grey before! — and Jeff touches on why this comic makes him feel for Brian Michael Bendis. No, really.

0:42:41-1:03:37: A sound effect — and, in reality, a break while Jeff works out different audio options to fix the static — later, and we’re back to talk about Fantastic Four #s 287-288, in which pedantry is the order of the day as the Beyonder steps in to try and fix the Doctor Doom continuity error accidentally caused by the first Secret Wars and we get to see, as Jeff points out, Jim Shooter’s fictional analog get berated by John Byrne’s fictional analog — because, oh yes, Reed Richards is in fine “Reed Knows Best” form here. Also, turns out that the pairing of John Byrne and Joe Sinnott is not a good one, especially when it ends up with Sue getting a new haircut that looks like this: 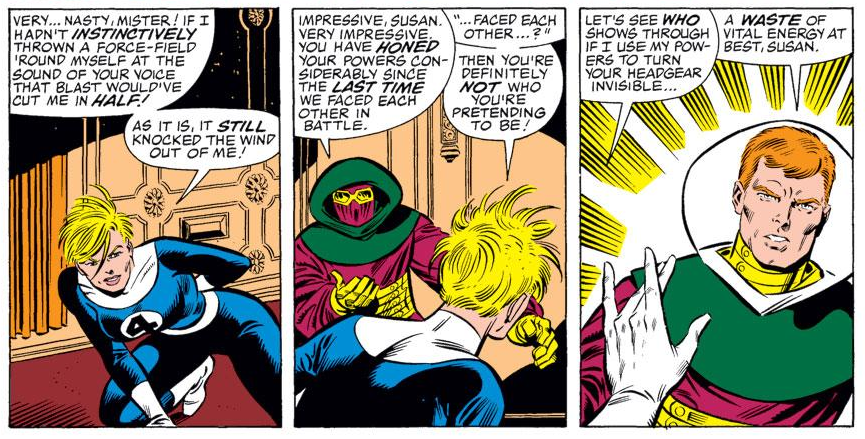 Also! Are godlike beings restricted by history? Does anyone besides me miss the Watcher about now? And is “John Byrne, Continuity Cop” actually a good thing…?

1:03:38-1:10:59: We take a short detour to discuss the equally short tenure of John Byrne’s Imperial Period: Are Fantastic Four and Superman as good as it got for him, and if so, does that mean he was only on top of the world for seven or eight years or so? (And even during that, there was the not-very-good Alpha Flight…) 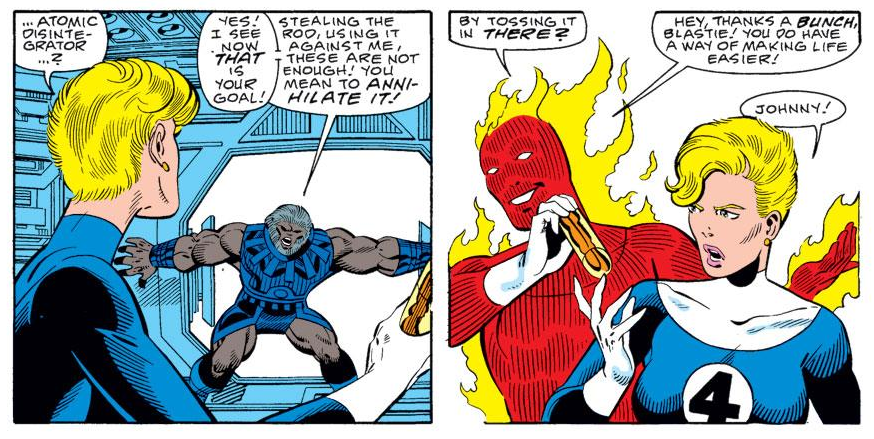 1:11:00-1:26:41: I am, shall we say, somewhat non-plussed by FF #s 289-290, in which Byrne apparently looked at his previous Annihilus storyline and thought, “Well, too much happened in that story, I can do something far more boring.” Jeff describes the execution of the story as being the product of a man in “gotta catch a bus mode,” which might explain just why Johnny Storm acts like the world’s most idiotic man here, Reed gets apparently killed twice without no-one caring apart from Sue, and the villains come across as even more of an afterthought with little aim or ambition than they usually do. Oh, and Sue and Johnny have the same hairstyle. No, really, look: 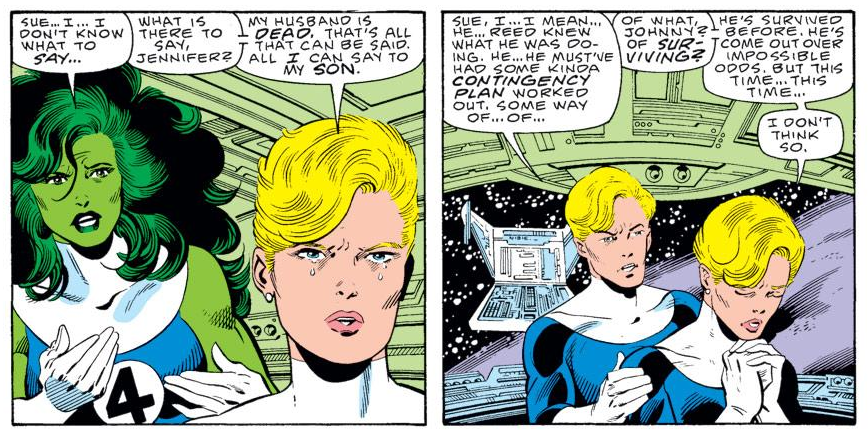 Seriously, what were you thinking, John Byrne?!? The worst part? There’s a really good idea at the heart of this story, as we riff about momentarily. Don’t make us do your job for you, Byrne…!

1:26:42-1:45:36: But, wait! Could Fantastic Four #s 291 and 292 be even worse than the previous couple of issues? It’s not impossible, but before we get there, I share a theory about whether or not Byrne was phoning these issues in because he had actually quit Marvel a year earlier. From there, it’s all talk of repetition, Star Trek rip-offs and whether or not a plot about Nick Fury traveling in time and planning to kill Hitler years before World War II would actually be a big deal or not had someone else been working on the book at the time. Does it matter? Of course not, because we are trudging through the very end of an era here, and it’s not pretty.

1:45:37-1:51:18: Okay, Fantastic Four #293 is actually the end of an era, being that it’s John Byrne’s final issue — and, in great Fantastic Four tradition, it’s the first part of a storyline that he won’t get to finish. If you’re hoping that means he’ll get to finish in style, then… well, prepare to be disappointed with an issue that barely features the FF, and in fact kind of feels more like a West Coast Avengers fill-in… Still, our long national nightmare is over. Kind of. 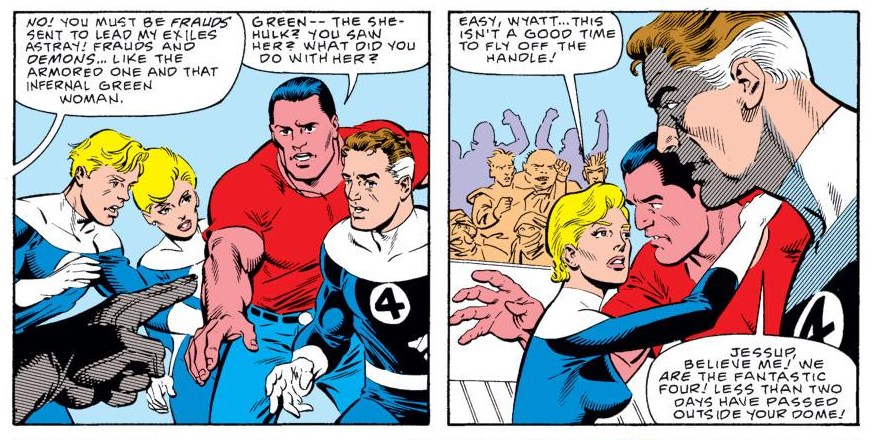 1:51:19-end: Things devolve slightly as we tackle FF #294-295, the first Byrne-less issues of the series in five years by… kind of ignoring the story and concentrating on comparing how temporary replacements Roger Stern and Jerry Ordway did in comparison to what had come before. (Spoiler: Just because they seem to care about the work, it feels like a step up, although Byrne was arguably more talented than either?) We also talk about what John Byrne did next, our secret plans for a John Byrne podcast and look ahead to what’s upcoming in the next Baxter Building — #206-304 — and what’s coming in the next Wait, What?, because the answer is, somewhat surprisingly, more John Byrne. Even more than usual considering the audio problems, thank you for listening and, considering how late this is going up, thank you for your patience in reading. We’ll do better next time! Honest!