Previously on Baxter Building: Forget about your previouslys, because this episode we’re jumping through the years to cover four different annuals we’ve left untouched until now, from 1985 through 1991. What is time, anyway…? 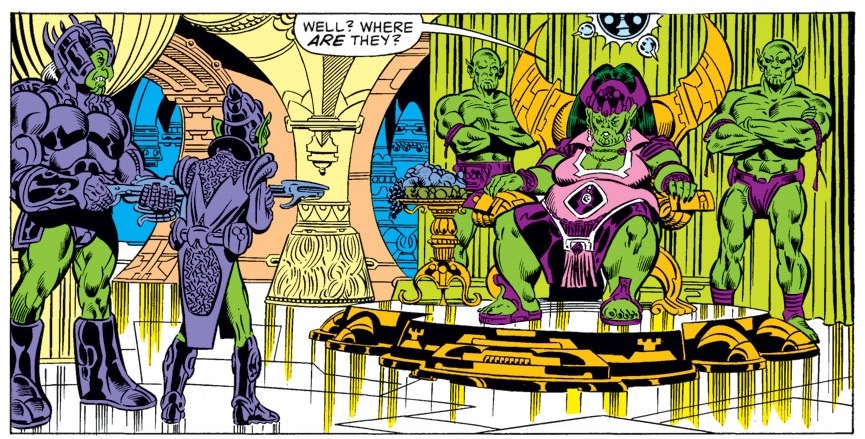 0:00:00-0:07:17: In an attempt to catch up on the backlog of ignored annuals — and also try to put off the start of the Tom DeFalco/Paul Ryan run just that little bit longer — we’re covering Fantastic Four Annual #s 19, 22, 23 and 24 this time around. (We covered Annuals 20 and 21 in episodes 34 and 35, for those wondering, because they tied in directly to the Steve Englehart run in the regular series.) Given the quality of these comics, that may have been a bad idea, but before we get there, we talk briefly about annuals and what they used to mean for the Marvel line. 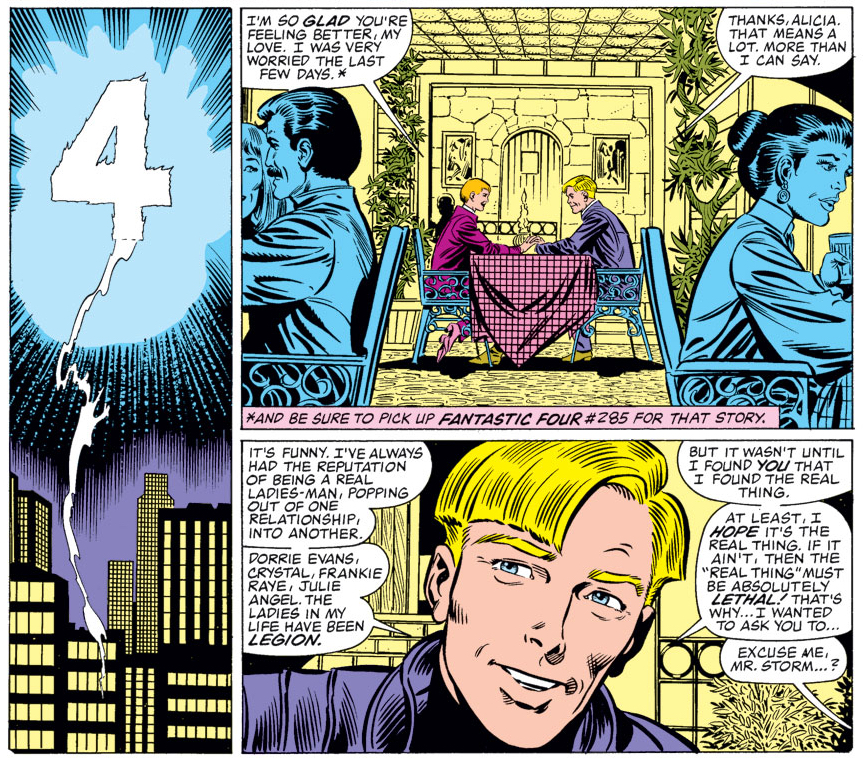 0:07:18-0:36:40: We begin with a blast from the past — and I’m not talking about the quasi-return for the Enfant Terrible. Fantastic Four Annual #19 is an all-John Byrne issue — with Joe Sinnott inks, to boot — and that means that we get a refresher course in all his particular quirks. (Those of you who like the hyper-competent, impossibly-correct Reed Richards, prepare to get excited.) Under discussion: John Byrne’s painfully slow pacing, the unexpected choices of Skrull shapechangers, differences in inking between Kyle Baker and Joe Sinnott, and why this comic is just like a movie by M. Night Shyamalan. 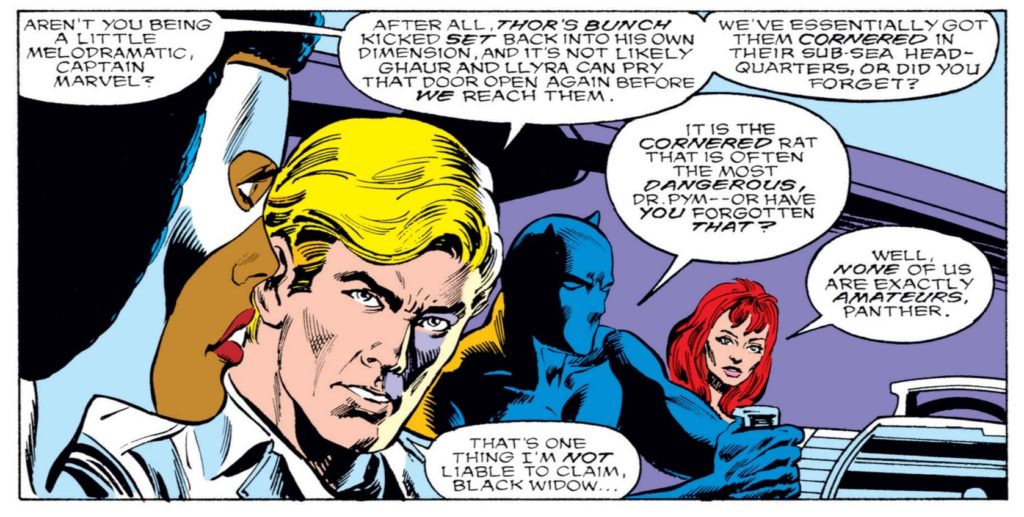 0:36:41-0:54:04: If 1985’s annual left us unimpressed, it seems like Lee and Kirby compared with Annual #22. The final chapter of the 14-part Atlantis Attacks is no-one’s finest hour, and barely a Fantastic Four comic at all, but it does feature some almost impressively heavy exposition and unsubtle dialogue as the idea of characterization is seemingly abandoned in the name of just getting to the end of the story at any cost. (Of particular concern, Dr. Strange and Reed Richards, as we go into.) Compared with this, the back-up strips shine, but Jeff doesn’t know that because, inexplicably, neither of the FF-related back-up shorts are included in the Marvel Unlimited version of the issue, meaning that I have to give a brief plot summary of both to explain why they’re worth hunting down. (Hilary Barta alone should get people excited, I think.) 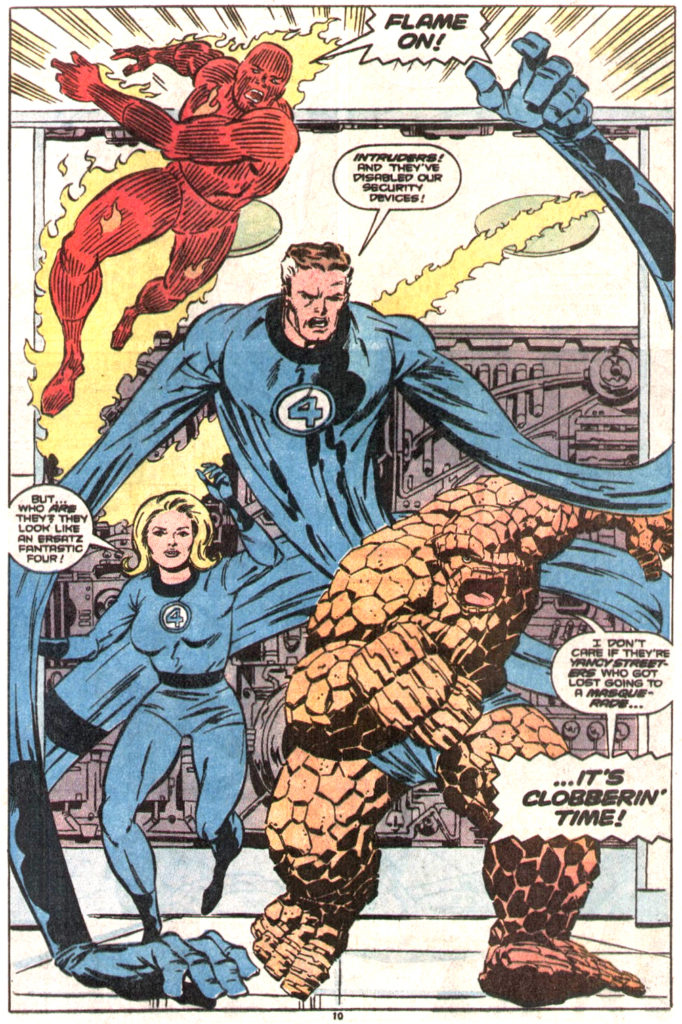 0:54:05-1:22:48: There’s a lot that’s wrong with Fantastic Four Annual #23, not least of which being the fact that it’s pretty much a bad X-Men comic that just happens to star the Fantastic Four. This brings Jeff to the conclusion that the first chapter of “Days of Future Present” is, in fact, a meta-textual “Days of Future Past” that reveals the post-Chris Claremont era of Marvel’s X-Men line a year before it arrives. Considering that X-Men editor Bob Harras scripted the main story in the issue — a fact actually hidden away on page 23 of the story, amazingly — this might not be a coincidence, admittedly. If the primary story doesn’t impress us, there’s a pleasant surprise in the back-ups, as James Brock’s Volcana strip feels like a solid first issue of a mid-range comic, while Jeff is far more taken with the cosmic travelogue offered by Kubik and Kosmos than I am. I blame his long-standing fondness for Jim Starlin comics. (Also, in explaining away the end of “Days of Future Present,” I accidentally say that Franklin has ghost powers; I meant to say he has dream powers, and that Adult Franklin is hijacking them. My mistake, by which I mean, oh God, these comics are so bad.) 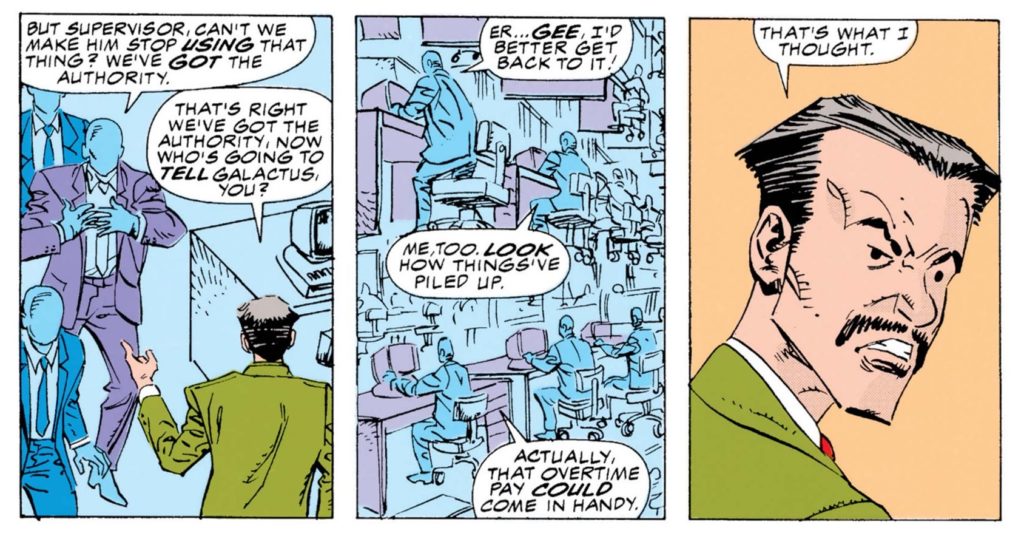 1:22:49-1:49:01: By the time we get to Annual #24, both Jeff and I are pretty exhausted by the crappiness of what we’ve been reading, but not to worry; there’s the first chapter of an entirely unnecessary sequel to the Avengers storyline “The Korvac Saga,” which is not only written, but also pencilled and inked by Al Milgrom. (As we say, he tries to channel Simonson in scenes featuring the Time Variance Authority; Jeff thinks he nails it and I most certainly do not, but look up and you tell us.) Continuing the theme, this isn’t really a comic about the Fantastic Four, but when I tell Jeff the way the storyline ends in another comic, it’s fair to say that he couldn’t care no matter who it’s about. Luckily, there are back-ups, including a second (admittedly lesser) Volcana strip and a Super Skrull short that gets us all bothered about why it even exists and who it’s intended for. Are we too grumpy? Don’t blame us; these are very bad comics.

1:49:02-2:12:59: In fact, they’re so bad that Jeff returns to his comment from a couple of episodes ago about whether or not he even likes the Fantastic Four, and turns it on its head: Do these comics prove that Marvel doesn’t like the Fantastic Four? Or, at least, that it doesn’t know what to do with them? We talk about the lack of Fantastic Four in these comics compared with the Steve Englehart Annuals we covered earlier, and also about the lack of focus on the characters even when they do appear. Is this a sign of the Image-ization of Marvel that was happening at the time, or something else? (And, in a tease of what’s to come, I bring up the idea that the Fantastic Four comic’s specific response to Image is what forever doomed the book to be seen as a retro title, but the proof of that pudding is yet to come.)

2:13:00-end: We wrap things up with promising a new Wait, What? in two weeks and invite everyone to send questions for a special Q&A episode. Send us an email or tweet at us; you can also send us a message through Patreon if you’re a Patreon Patron and that’s your speed. As ever, we also remind people about the Twitter, Patreon and the Tumblr, and then Jeff’s ever-friendly tones walk us out. Thank you, always, for reading and listening. Now, send us questions!