Previously on Drokk!: After the Garth Ennis years and a tease of a Mark Millar era — not to mention an increasing reliance on formula, rendering the series surprisingly stale — Dredd co-creator John Wagner has returned to guide the character in both 2000 AD and Judge Dredd Magazine, which should be a good thing, right…? Right…?

0:00:00-0:06:33: This time around, we’re talking about Judge Dredd: The Complete Case Files Vol. 22, which collects material from 1993 and 1994, and sees Wagner firmly re-established as the primary writer of the strip (although others, including Peter Hogan and the recently departed Si Spencer, show up as well). I talk about the reasons I like the book, although Jeff isn’t convinced by either my arguments or Wagner’s attempts to break with the conventions of the strip. Is this the second schism volume in a row? 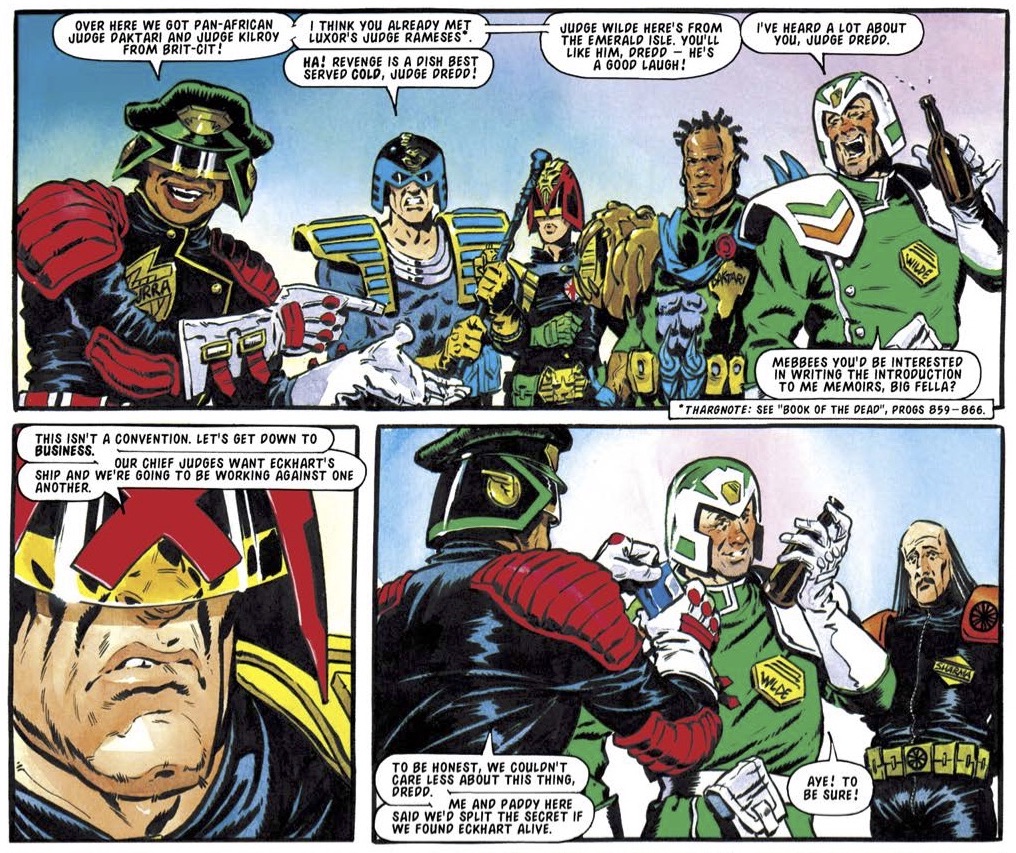 0:06:34-0:25:23: It only makes sense that we tackle the low point of the volume immediately, so we deal with “Crusade,” a Grant Morrison/Mark Millar serial that massively outstays its welcome, even with art by Mick Austin. We talk about the unexpected Pat Mills influence (especially Nemesis the Warlock), and about Mark Millar’s faith and how that plays into his writing (or doesn’t, as the case may be). We also talk about bad design choices, and the ways in which something can be “not boring,” but that doesn’t necessarily make it interesting, either. Suffice to say: we didn’t like “Crusade” at all. 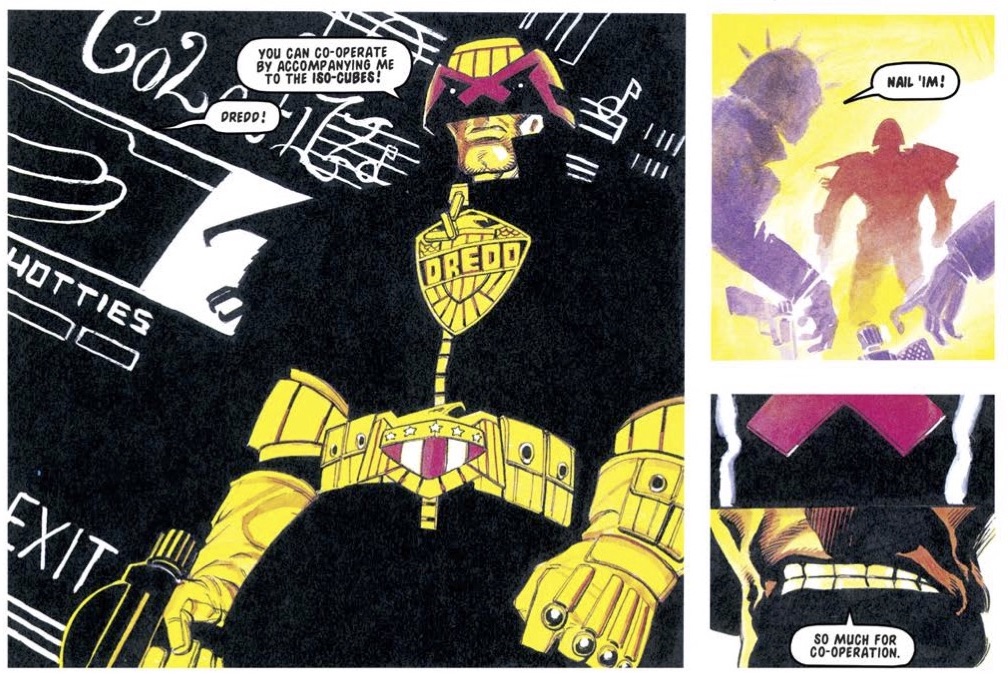 0:25:24-0:38:55: We move on to “Escape from Kurt Russell,” a John Wagner/Paul Marshall short that has some interesting choices in terms of tone — we discuss whether or not the denouement is a pisstake, a joke, or just a strange idea — and perhaps a coded message to Frank Miller of all people. Perhaps more importantly, it’s also a story from 1994 that previews the plot of 2012’s Dredd movie, which neither of us expected at all, although Jeff points out in passing that there’s also a Mister Miracle Kirby influence at play that I didn’t see at all.

0:38:56-0:59:19: A quick spin through the majority of the other stories in the volume sees us talk about the fact that so much of this book is just… fine, which is far from a selling point. Under some discussion is the self-conscious darkness of the Magazine material from this era, the oddness that is the Bill Clinton cameo in one episode, and my theory about the real reason why John Wagner returned to Dredd — and what that might mean about the “Candidates”/“Voting Day” storyline that opens this collection. 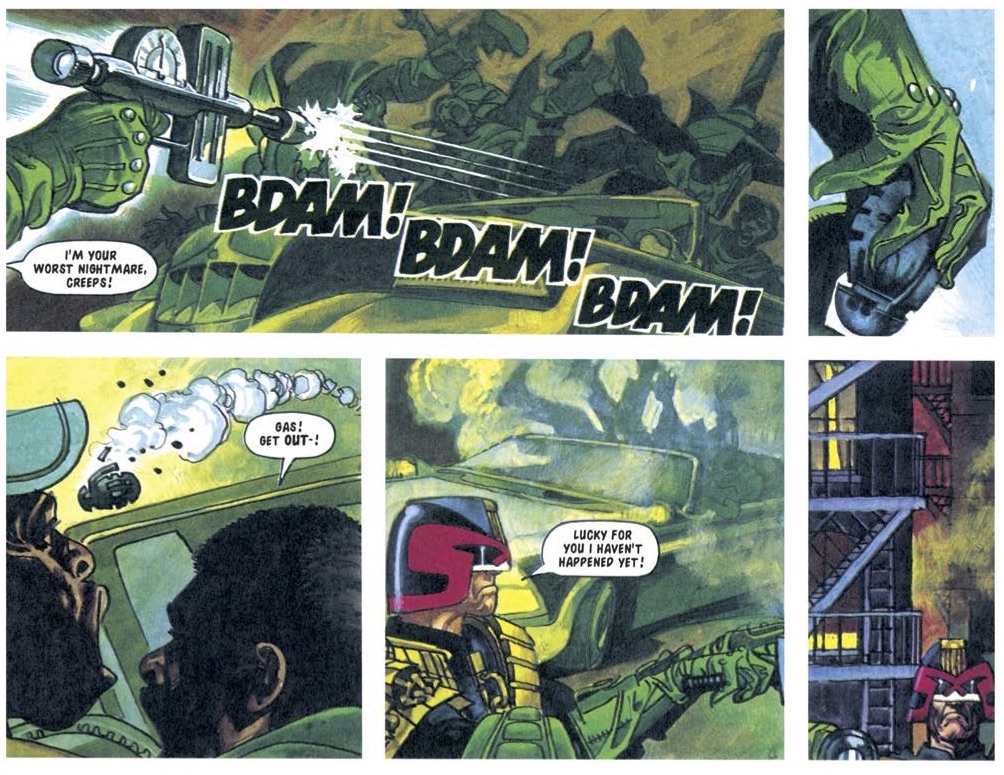 0:59:20-1:41:52: The meat of the episode is exactly what Jeff thought it would be: “The Exterminator,” a ten-episode story that entirely drops the Dredd formula in favor of… a Terminator pastiche, of all things. I love it, but Jeff is less sure, and we talk about why, as well as Jeff’s ambitious theory about what the story is actually about. Also discussed: Wagner’s awareness of racial themes and police complicity in oppressive status quos; whether or not John Wagner is purposefully trolling the makers and cast of the 1995 Judge Dredd movie with this story; editorial oversight and overreach; the parallels this serial has not only with Terminator, but also Alien; Wagner’s interest in time travel and the ways in which it could have been used more appropriately, or at least interestingly, in this particular story, and far, far more. It’s definitely Wagner trying something different with the strip, but is that enough to make it a worthwhile excursion?

1:41:53-1:47:38: So, is this book Drokk or Dross? Both of us go for the former option, although Jeff finds it a more perilous proposition than I do. We don’t do the traditional mentioning of our favorite stories from the volume, but I’d already plumped for “The Exterminator,” and Jeff elsewhere describes it as Wagner’s potential masterpiece, so… let’s just say that’s his choice, too. (He also talks about his love for “Crash Diner,” a Wagner/Cyril Julien short from the Magazine, so perhaps that’s his choice.) Also discussed: a brief mention of what we’ll be reading next episode, which includes a return of Bill Clinton of all people… 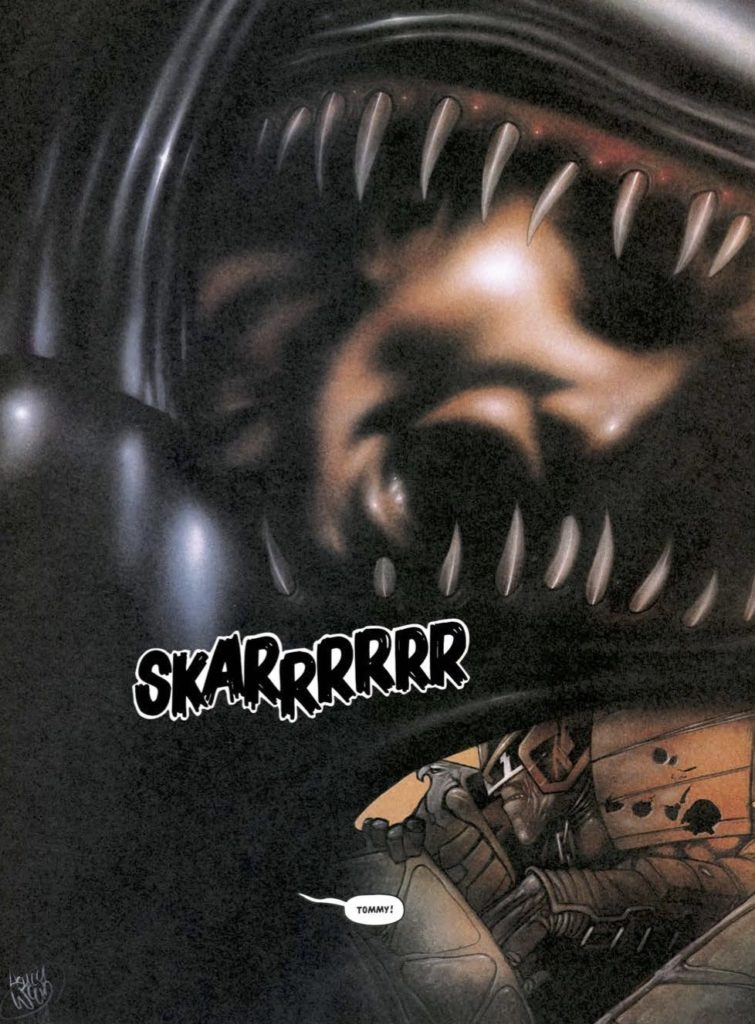 1:47:39-1:51:54: Jeff suddenly realizes that we didn’t really talk about the art in this volume as much as usual, and singles out some terrible Ashley Wood, work, some great Dean Ormston and Dermot Power work, and John Burns and Emilio Frejo’s art from “The Exterminator.” There’s also a Garth Ennis slam, just because.

1:51:55-end: We wrap things up the way we always do, by mentioning the Tumblr and Instagram that I haven’t updated in forever — I’ll change that soon, I swear — as well as our Twitter and Patreon accounts, and Jeff sings us out beautifully. We’ll be back in a month, when we’ll have to deal with checks notes new Pat Mills and Garth Ennis Dredd…? As always, thank you for listening and reading along. 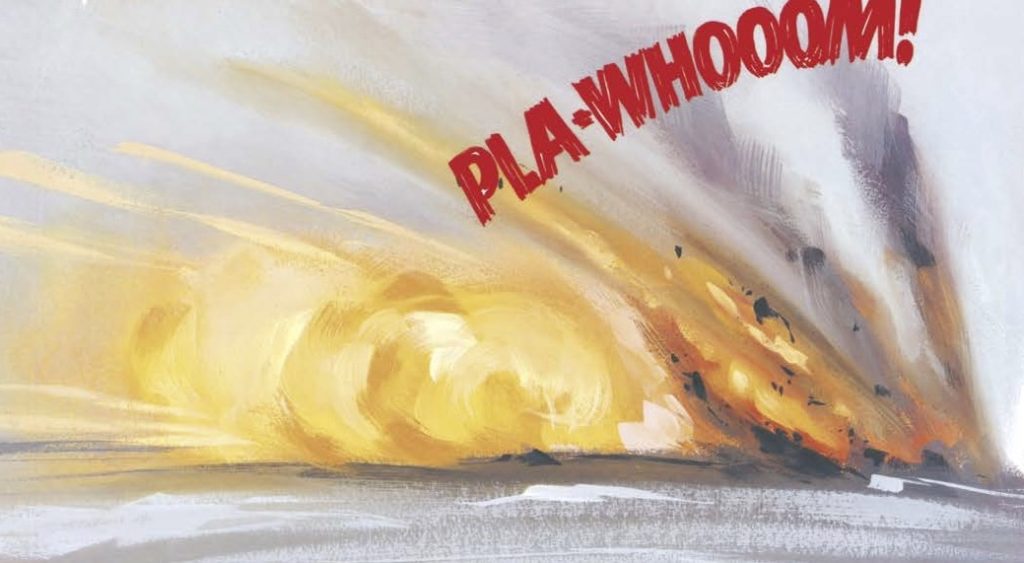 11 comments on “Drokk! Ep. 25: “If You Want To Serve Justice I’m Offering You The Best Chance You’re Ever Going To Get””