Previously on Drokk!: Character co-creator John Wagner has returned to the Judge Dredd fold on a regular basis, and if the result isn’t exactly the highpoint of the strip from the 1980s, it’s still far better than we’ve seen under replacement writers like Garth Ennis and Mark Millar. (Both of whom were very early in their careers at the time.) Is there life to Dredd beyond Wagner? 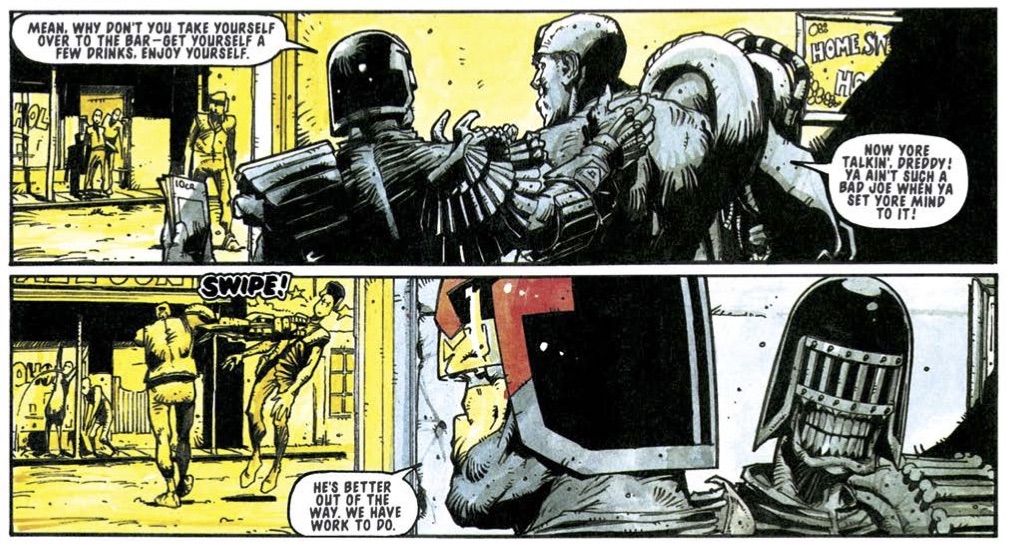 0:00:00-0:05:48: We’re covering Judge Dredd: The Complete Case Files Vol. 23 this episode, and both Jeff and myself are a little surprised at how much we enjoyed the book — especially given that we’re both willing to admit that this is far from the best the character has been. Given the high number of writers on this volume, could it be that people other than Wagner are finally figuring out how to do Dredd right? 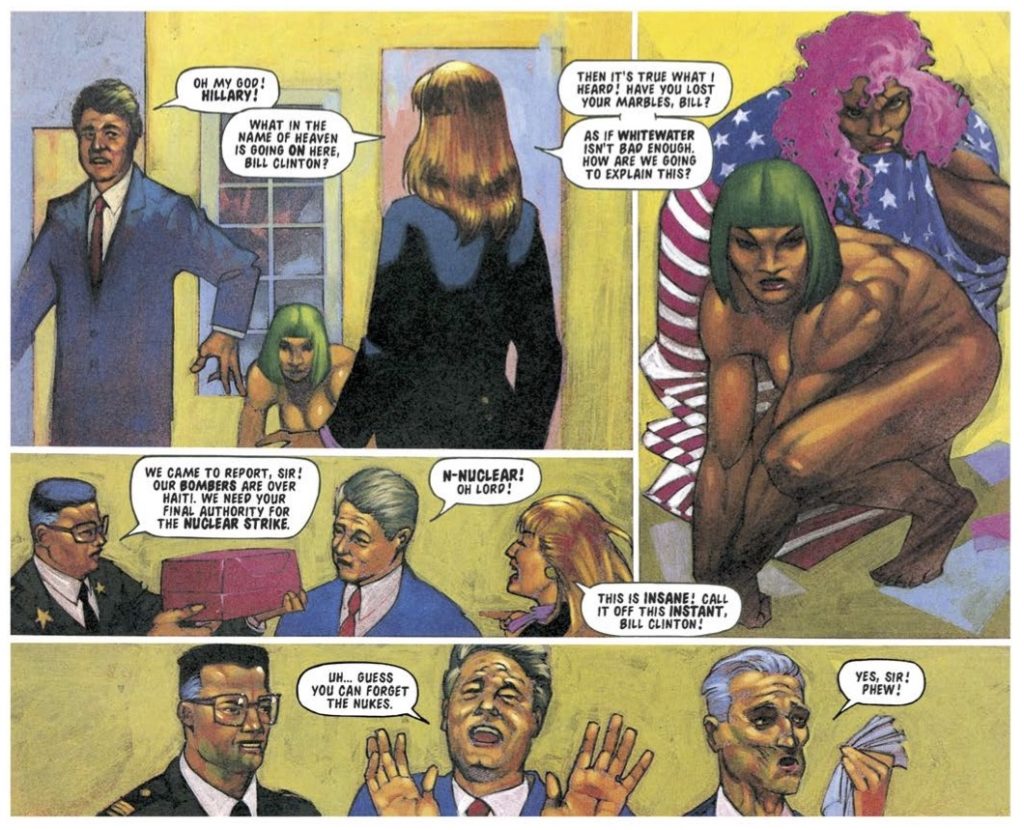 0:05:49-0:19:51: The first question I have for Jeff this episode is maybe the most obvious question of the book: exactly what was John Wagner’s deal with Bill Clinton? This collection has two separate stories parodying Clinton, both of which appeared at a time when I believed the President was more or less popular on both sides of the Atlantic. The educated Mr. Lester puts me right with a history lesson, and also attempts to answer my question by suggesting just what Wagner might have been writing about with regards to the Celebrity Saxophonist President’s appearances — both literal and parodic — in here. 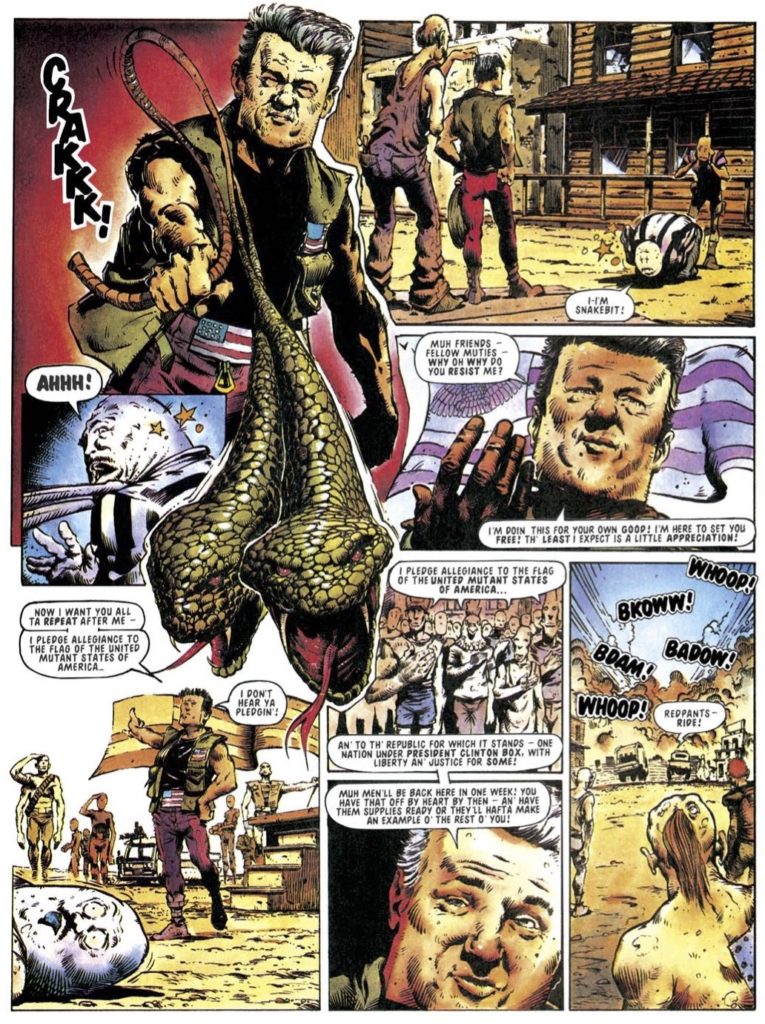 0:19:52-0:27:36: The second of the Clinton-centric stories is “The Three Amigos,” and Jeff and I talk about its appeal beyond any Presidential parody: that it’s a particularly Wagnerian tale that originally feels just the opposite, that it’s a classic Dredd mix of the ridiculous, the smart, and the gloriously stupid, and that it offers fan service in such a way that ultimately feels true to the spirit of Dredd (and John Wagner) and feels like great examples of both. We like the story, to say the least.

0:27:37-0:51:30: This leads into a discussion of whether or not the collection feels like it’s full of “classic Dredd” stories or not, and what that idea even means. How has John Wagner evolved as a writer, and does that evolution mean that he couldn’t write the same kind of stories as he did back in the 1990s? What is different in terms of what Wagner is trying to do in his stories in this volume? Can other writers measure up, or even find ways to continue what Jeff calls Wagner’s “melancholic” stories about Mega-City One using Dredd? Oh, and because we’re talking “classic” Dredd, everyone will be happy to know that we also talk about the racist “Language Barrier” short as well. No, not happy, what’s the word I’m looking for? Exhausted. That’s right. Also under the briefest of discussions: Is “bad” John Wagner just like Alan Grant? 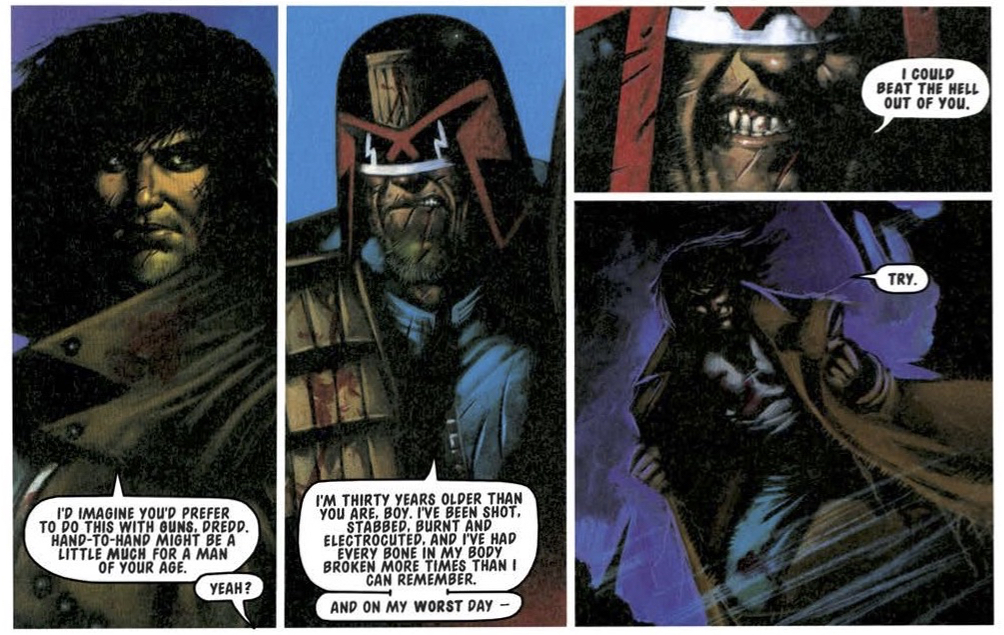 0:51:31-0:59:18: It’s not all John Wagner and the new generation of Dredd writers this time out, though; Garth Ennis returns unexpectedly with an overlong return to his self-consciously badass creation Jonni Kiss. To no-one’s surprise, Jeff dug it and I didn’t, and we talk a little bit about why, as well as how Ennis seemed to be about to escape from John Wagner’s shadow by embracing the spaghetti western, and how Wagner managed to ruin it. 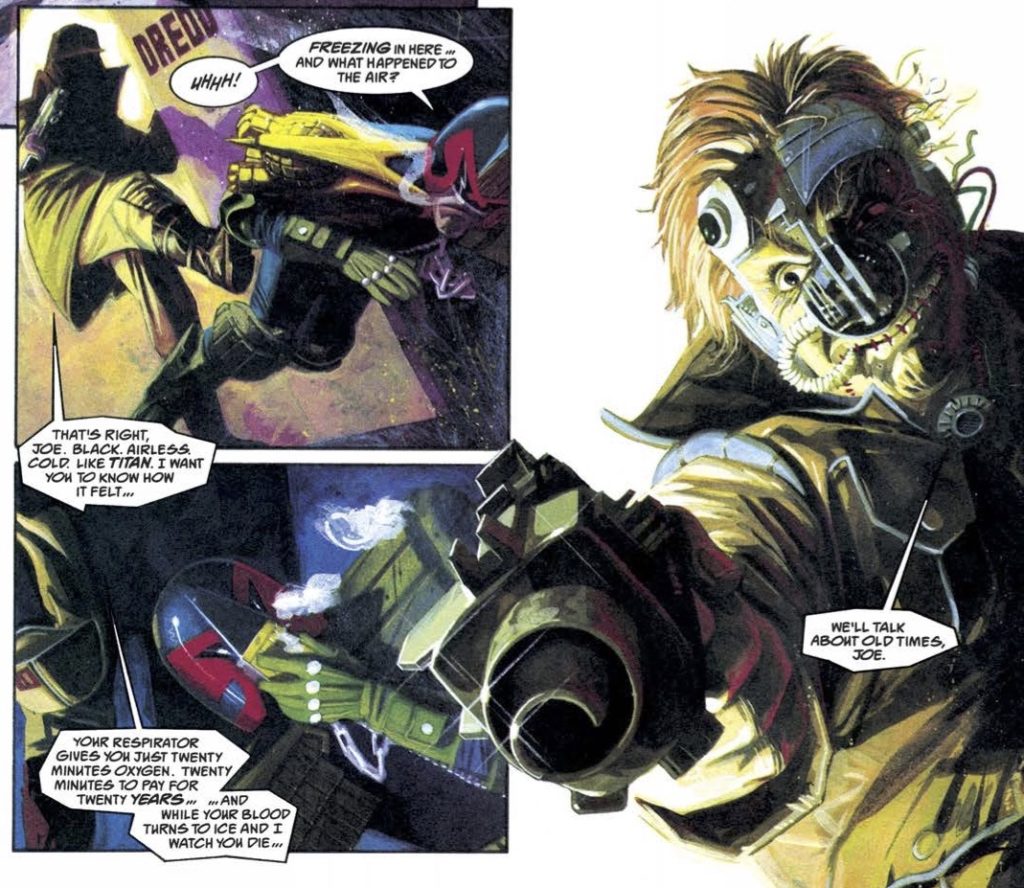 0:59:19-1:11:13: As if Ennis’s return wasn’t enough, this volume also sees the first Pat Mills Dredd work in a decade or so, and he’s basically rewriting one of his earliest contributions to the series. Does it work? Not really, and we talk about why, with Jeff bringing up the unexpected tropes that Mills seems eager to insert into the relationship between Dredd and his brother. Meanwhile, I really like Paul Johnston’s artwork, and Jeff doesn’t, and we talk for a little bit about why that is. 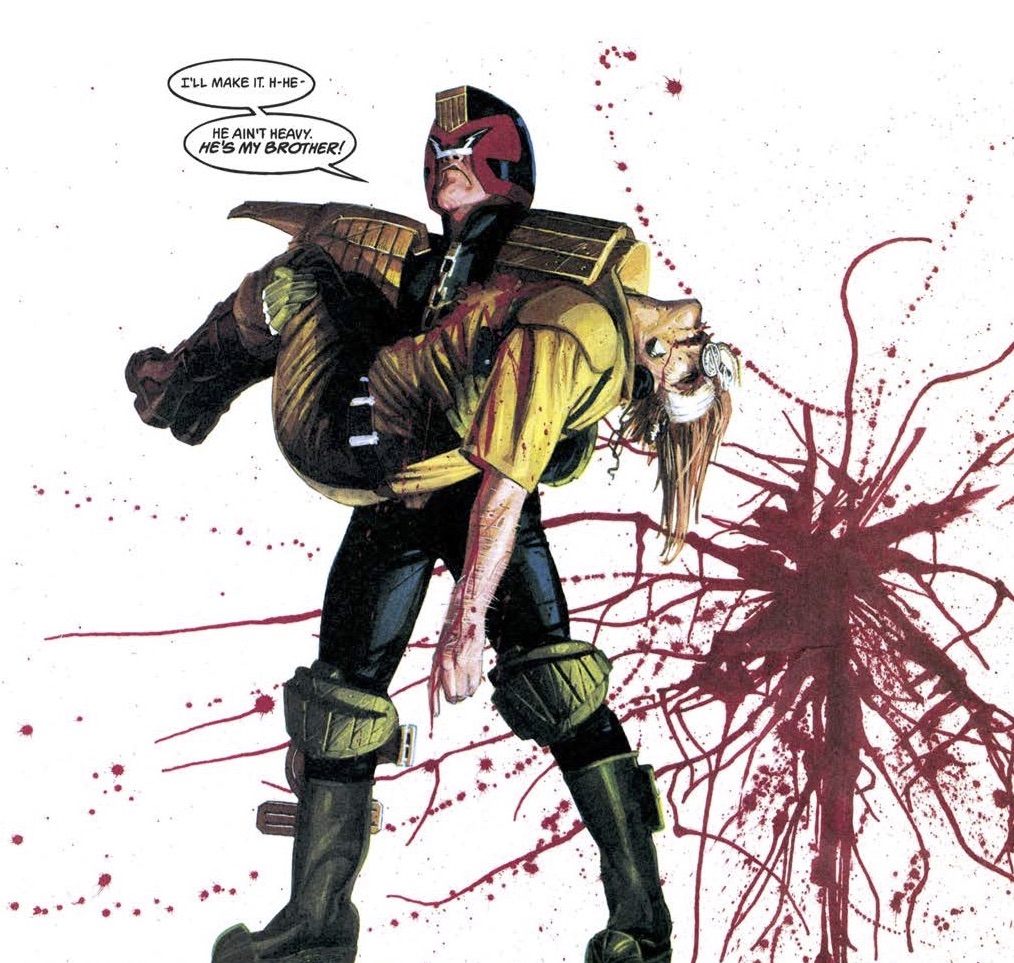 1:11:14-1:19:17: What is it about Dredd that Ennis and Mills don’t seem to grasp, but which John Wagner seems to have an instinctive feel for? Could it be that the latter really doesn’t seem to be concerned with showing Dredd to be particularly tough or even aware of anything beyond doing his job, whereas other writers — including Grant Morrison, in earlier stories — seem obsessed with giving the character a hero moment to remind readers that he is, in fact, the most macho character in comics? 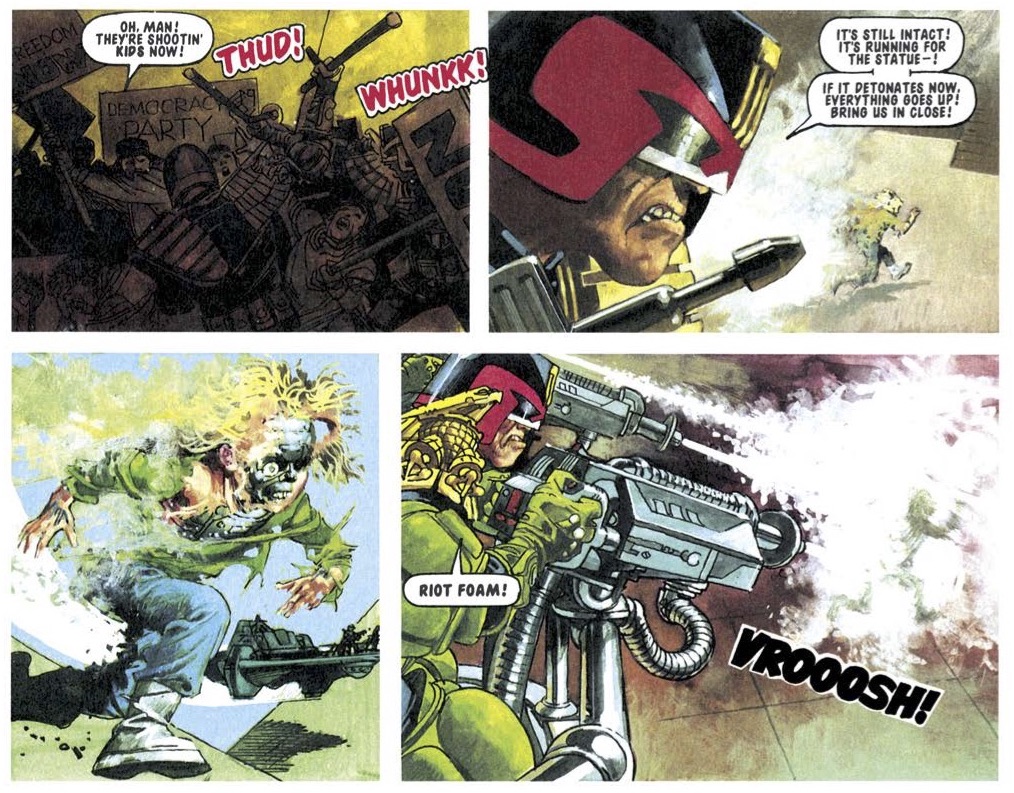 1:19:18-1:29:28: Is Judge Dredd a nihilistic strip? I argue that it’s not, but my esteemed colleague is far from convinced and has some examples to push his depressing agenda. I think that there’s a kindness and humanity in the strip — especially under Wagner, but not exclusively — that would belie it being truly nihilistic, and Jeff concedes that, if nothing else, Wagner refuses to be nihilistic towards recurring characters, and has an interesting theory as to why that might be. 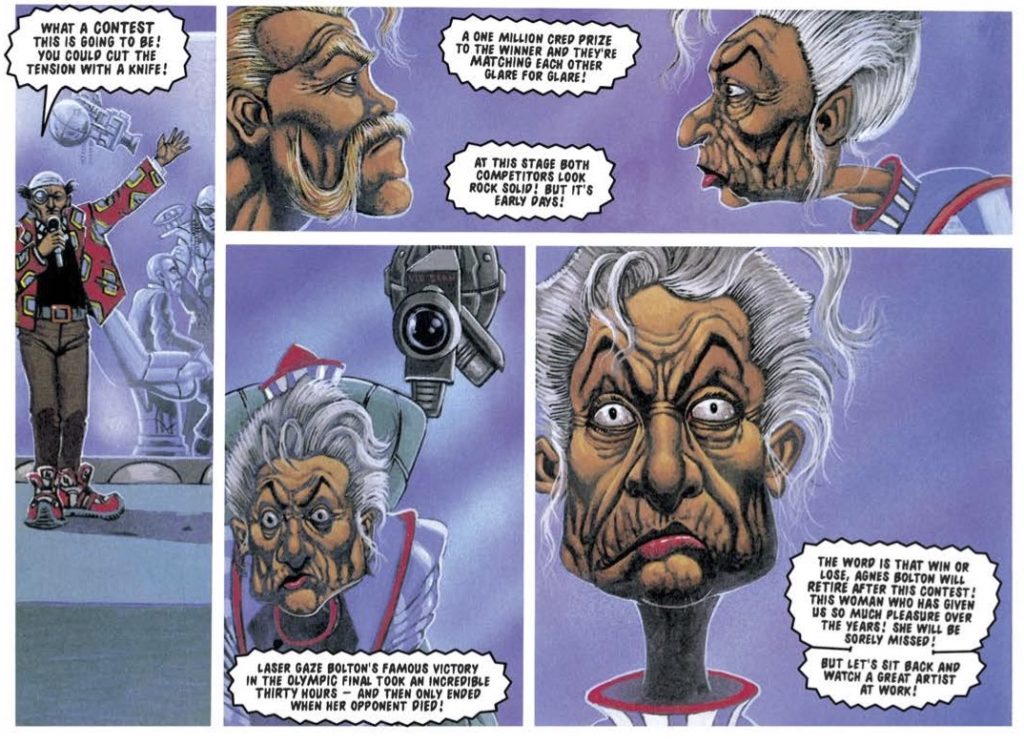 1:29:29-1:40:14: And so, is this volume Drokk or Dross? As might be clear by this point, we both think it’s Drokk, and we talk about our favorite stories — for me, “The Three Amigos,” for Jeff, the one-off “Bug Crazy,” but Jeff also talks a little bit more about the Ennis strip because he wants to torture me. 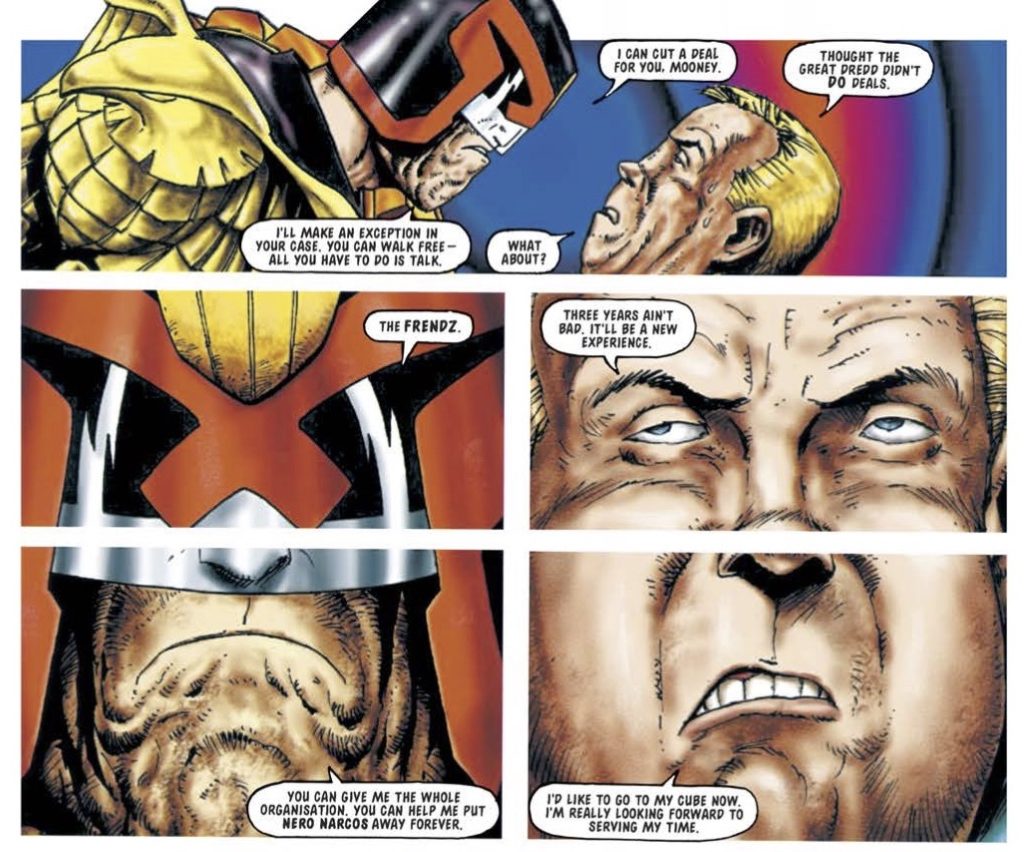 1:40:15-:1:46:41: Somehow, we’d gotten this far into the episode before we even mentioned “Bad Frendz,” a Wagner/Carlos Ezquerra collaboration that does everything you want a good Dredd to do, and also sets up things for the future — but that’s perhaps a sign that this collection was far better than it had any rights to be. 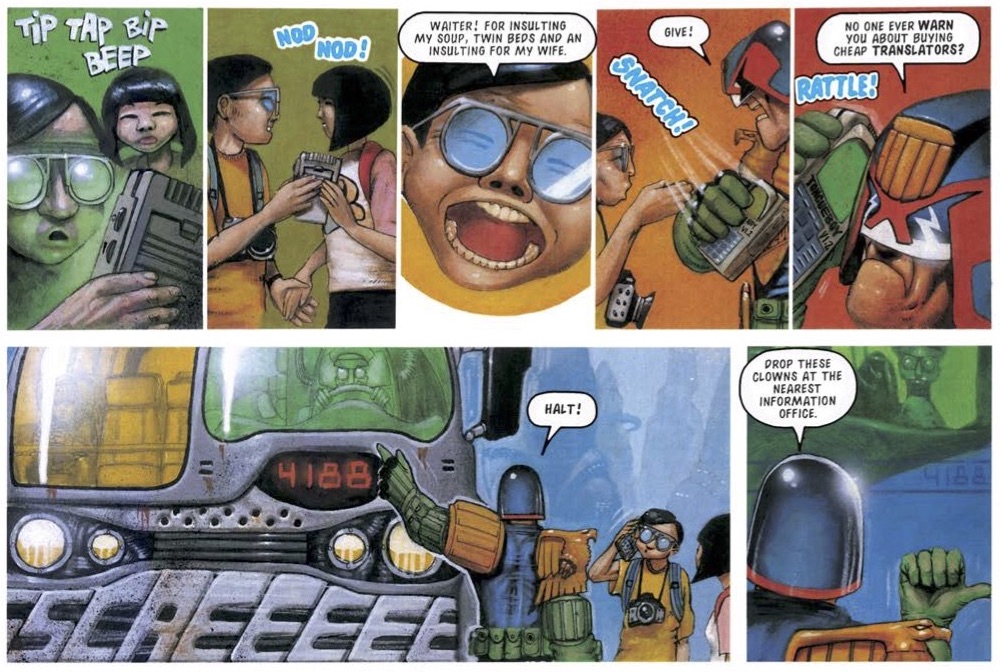 1:46:42-end: We wrap things up by looking ahead to the next episode, in which we’ll reach “The Pit,” an attempt to change the status quo around Dredd in an unexpected way, and also do our usual wrap up mentions of the usual suspect sites: Tumblr, Instagram, Twitter, and Patreon. As always, thanks for listening and reading along. Be back in a month for Dredd in a position he never asked for…