Previously on Drokk!: Having stayed on topic for the last 33 episodes, I ended the last installment of Drokk! with a question to esteemed co-host Jeff Lester: did he want to step away from Joe Dredd for a bit and spend an episode reading some Strontium Dog instead? The answer was yes, and so… this.

0:00:00-0:09:30: Sure, it’s technically a Drokk!, but at the suggestion of commenter Winty, we’re calling this one Sneck!, because that’s the curse of choice from this particular 2000 AD strip. Anyway, as the episode opens, we introduce the book we’re covering this episode — Strontium Dog: Search/Destroy Agency Files Vol. 2 — as well as the Strontium Dog strip in general, including a suggestion as to how it differs from Dredd despite sharing the same core creators. Indeed, John Wagner and Carlos Ezquerra (and Alan Grant) remained the creative team for the majority of the series’ run, unusually… 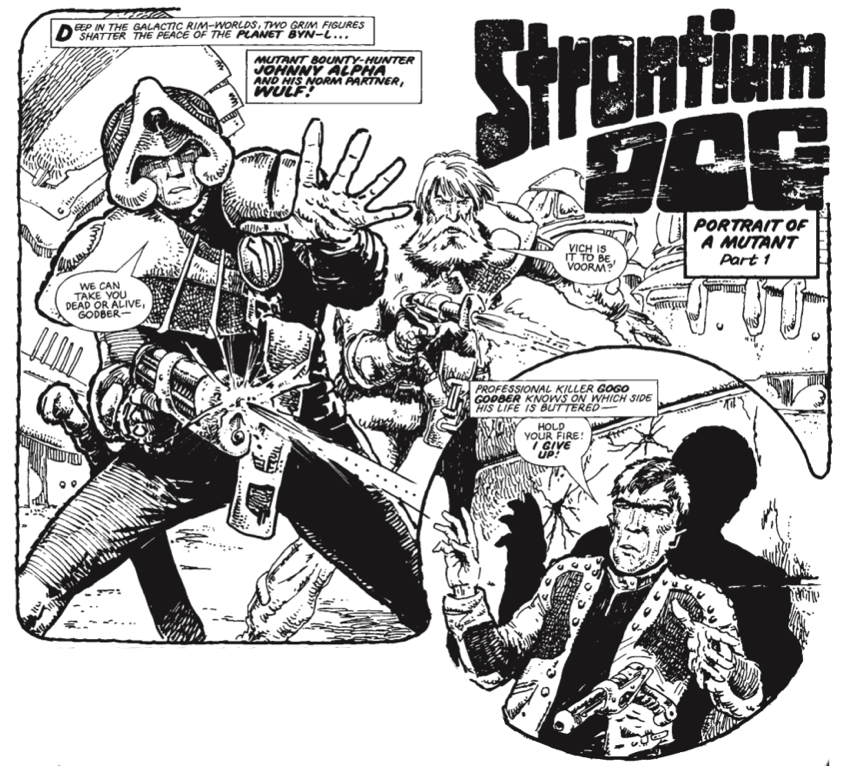 0:09:31-1:01:01: Be warned, show notes readers — we’re particularly elliptical on this episode, making straight-forward notation more difficult than usual. (Which, I think we all know, isn’t always the most direct as-is.) Anyway, we talk about a lot, including how the strip fits into both Eurocomics and Spaghetti Western histories; the fact that, even more than Dredd, this strip is a showcase for just how amazing Carlos Ezquerra really is; whether or not a 26-chapter extended flashback that delivers a metric shit-ton of expeditionary world building is the best choice to introduce a new reader to the strip; the ways in which Jeff’s expectations of the strip’s limits were exploded by “The Moses Incident”; how wildly variable the tone of Strontium Dog is, often within the same scene (and why it works, even though it shouldn’t), and whether or not that’s something that connects the strip to Underground Comix, as well as things like Howard the Duck and Cerebus the Aardvark; the ways in which the strip feels just seconds away from going wildly off the rails at seemingly any moment. And there’s even more, as you might expect from almost an hour’s worth of conversation. (We really did go on and on, without any clear demarcation. Sorry?) 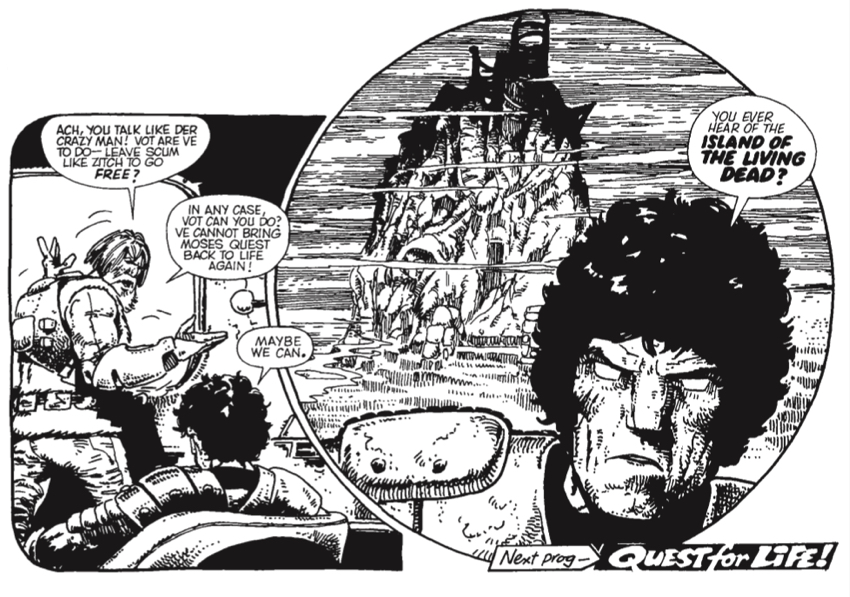 1:01:02-1:17:22: We talk for a little bit about the strip beyond this collection: what happened in subsequent collections, as well as the end and afterlife of the strip and the characters involved. (I say here that Garth Ennis’ Gronk makeover wasn’t done as a gag, which is entirely ungenerous and untrue; my point was that it felt as if the joke was that the Gronk was ridiculous as a coward, not that the makeover was inherently ridiculous in and of itself, but mileage may vary; I don’t like the Gronk, per se, but I still feel like he deserved better.) We also, again, talk about how great Carlos Ezquerra is, because really, his stuff here is amazing. Also covered: Jeff loves Johnny Alpha’s hair; is it easier to grasp the appeal and intent of Strontium Dog than it is Dredd?; Carlos Ezquerra likes to draw the same woman over and over. 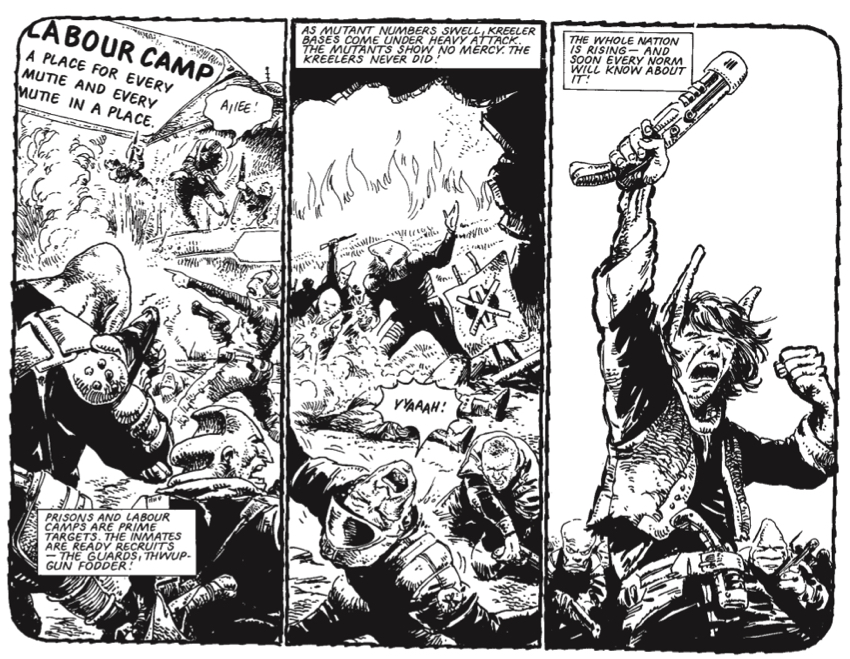 1:17:23-1:33:15: As we start to wrap things up, we talk again about Ezquerra’s brilliance, answer the question about whether or not this volume is a good introduction for new readers (from the point of view of a new reader), and ask ourselves, how should this be adapted into other media? Jeff and I have differing ideas, but since when is that a new thing? 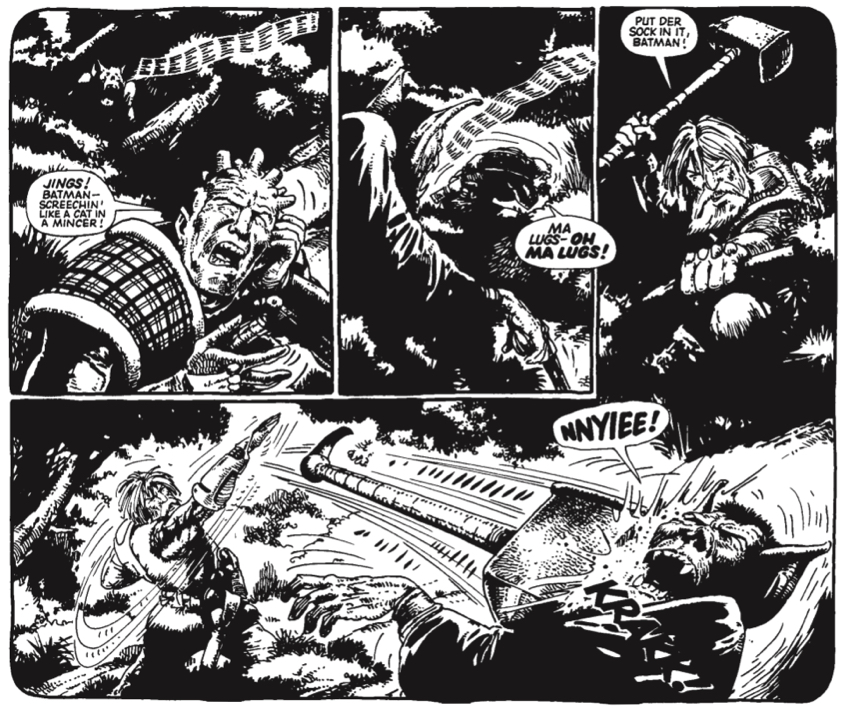 1:33:16-end: We properly bring things to a close by talking a little about what’s ahead for Drokk! and Wait, What? in general before the end of the year. It’s the last proper recording session for the year, so we share our thanks to everyone for listening along with us for the year, and to each other, too. (We don’t share the usual links to Twitter and Patreon, but assume that we do.) Next week: Our favorite books of the year! Next month: Back to Mega-City One! Right now: Thanks for reading along, as ever. 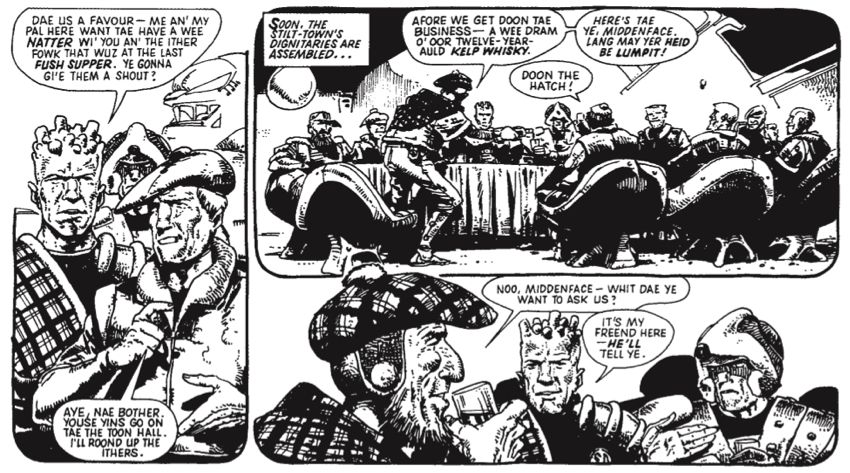