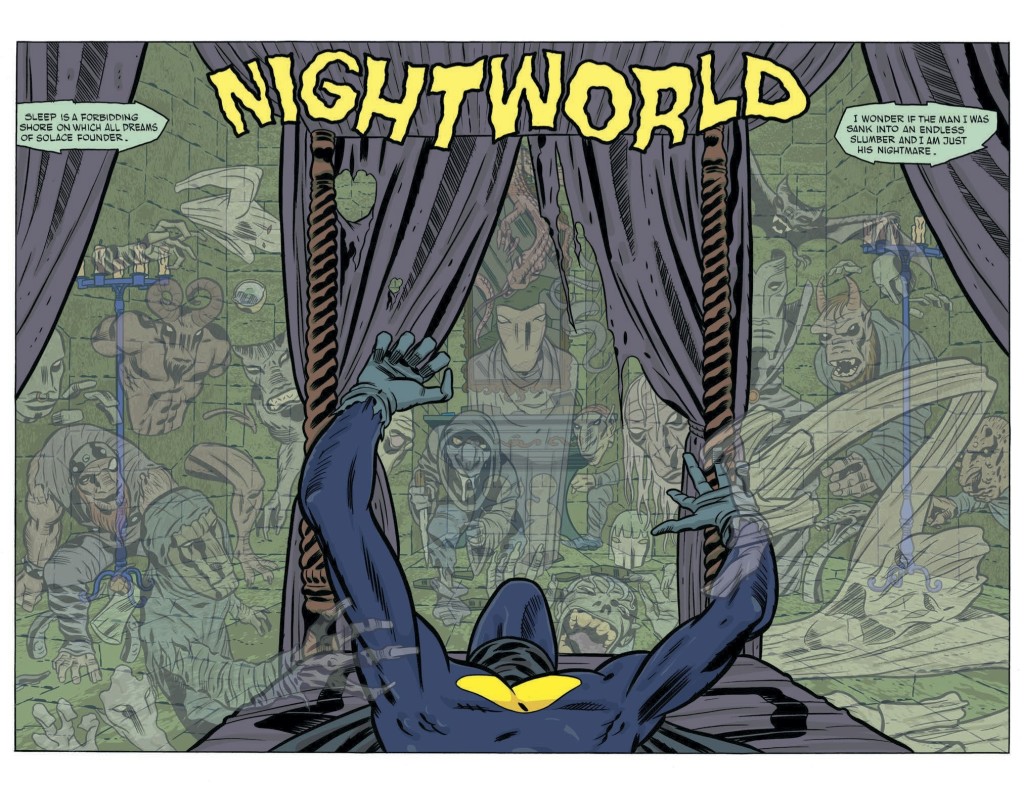 Hmm, yeah, there might be a slight Kirby influence here, maybe.

Hey, all!  We are back with episode 156, and, uh, I just found out about Robin Williams dying like, um, five minutes ago? So… yeah.  I’ve got the show notes I cooked up yesterday, but they won’t be quite as embellished as I’d like them to be since my brain is kinda shut down.  My heart goes out to his family and friends and to the man himself.  There’s not an official cause of death yet, but if it really was suicide that makes it seem likely that the guy was suffering in one way or another, which is just terribly, terribly sad to consider. I hope he found peace; I wish he could have found it here.

Anyway…yeah.  Join me after the jump for show notes, yes?

00:00-21:05: Greetings! Do you believe in psychic powers? Do you believe in Jay-Z and Beyonce? Do you believe that when Graeme describes the hubbub over Jay-Z and Beyonce as “ludicrous,” Jeff misses the opportunity to make a Chris “Ludacris” Bridges reference? Jeff still can’t believe it. Come for the greetings, stay for the guest appearance by Ernie and Gus! We are going to transition in this opening section to the comics talk and I’m not going to make a separate entry about it because I want to be somewhat discreet about what we segue into talking about it, in part because a certain amount of the talk is us discussing it in code, and then arguing about whether we should talk about it. You know how that goes, right? Anyway, depending on how long you’ve listened to us you might find our conversational equivalent of subtweeting either highly informative or utterly baffling.
21:05-49:40: Captain Victory and the Galactic Rangers #1 by Joe Casey, Nathan Fox, and Joe Casey! (We think Ulises Farinas doesn’t pop up this issue.) Graeme wrote a review which inspired Jeff to pick the book up. And so, you know, a conversation happened. I don’t know what to tell you—it just…it just happened. Mentioned: Omega The Unknown, both versions. Jonathan Lethem’s Omega The Unknown. Lethem’s oft-unmentioned writing partner on Omega The Unknown, Karl Rusnak. A surprisingly big discussion of Jonathan Lethem’s Fortress of Solitude. David Foster Wallace’s Infinite Jest. Dorothy Allison’s Bastard Out of Carolina. Stephen King’s Dolores Claiborne (1995, director: Taylor Hackford). Michael Chabon’s Amazing Adventures of Kavalier & Clay (All of the above are the original versions by Charlton Comics, not the reboots by DC Comics in the mid-90s.) And then we finish up by discussing… Captain Victory and the Galactic Rangers #1 by Joe Casey, Nathan Fox, and Jim Rugg! Impressive, right?
49:40-54:09: From a re-creation of a Kirby title, to a book that re-creates a Kirby comic: Nightworld #1 by Adam McGovern, Paolo Leandri, and Dom Regan. Published by Image, funded by Kickstarter, inspired by (at least) The Demon by Jack Kirby. A very fun match with Captain Victory, and a very enjoyable experience for those who don’t mind their books on the pastiche-y side.  The image for our post comes from this very comic (in case you couldn’t tell).
54:09-59:49: Graeme didn’t read Nightworld, but he did read the first issue of Terminal Hero by Peter Milligan and Piotr Kowalski. Does this mean we talk Shade, The Changing Man, The Human Target, and the writing of Peter Milligan? Does it ever!
59:49-1:10:29: Graeme’s also read the first issue of The Devilers by Joshua Hale Fiaklov and Matt Triano. Jeff has read the first two issues of Outcast by Kirkman and Azaceta, so get ready for demonic exorcism comics a go-go!
1:10:29-1:15:26: Is Jeff the Death of Comics? Well, obviously—duh!—but not due to any financial stinginess on Jeff’s part. Picked up recently and talked about super-super-quickly are: What Did You Eat Yesterday, by Fumi Yoshinaga (vols. 1 and 2) and The Wrenchers by Farel Dalrymple.
1:15:26-1:51:55: Very quick discussion of some Batman vs. Superman news, and then we talk about Guardians of the Galaxy. (SPOILERS re: Guardians. We pretty much give it all away). And then Jeff talks about Transformers 4 because god damn it he saw it okay and god damn it he liked it. But mainly we talk about Guardians… A LOT.
1:51:55-2:21:39: Graeme asked people for questions on Twitter, as well as posting some amazing stuff on our Tumblr. (You should check these sites out, if you’re not already.) And don’t be upset, Patreon people, Graeme forgot we promised exactly this kind of thing for our long-term patrons…but we handle just two or three questions very briefly. The big question-a-thon, we did not do this time. Discussed: the post-credits sequence of Guardians, some of the credits themselves, and the case with Marvel’s credits (and maybe that’s where we touch on, all too briefly, this article about Steve Gerber?). Also discussed: deprivation tanks and Altered States, as well as a comic about the former by Lucy Bellwood; recent surprisingly great comics we’ve read: the last volume of DC’s Spirit Archives by Will Eisner; the above-referenced What Did You Eat Yesterday?, Volume 1

by Fumi Yoshinaga; Batman Eternal #18 with some beautiful art by Andy Clarke and a cover by Alex Garner; issue #5 of Batman: The Jiro Kurwata Batmanga; Hawkeye #19; and Grayson #2 by Tim Seeley and Mikel Janin. We also discuss what might be the next big direction from Image; in-jokes that go over our head; and others.
2:21:39-end: Closing comments!  Which includes among other things, us exhorting you to check us out on Twitter (twitter.com/waitwhatpodcast), tumblr (http://waitwhatpod.tumblr.com/), and, of course, on Patreon (http://www.patreon.com/waitwhatpodcast) where, as of this count, 72 patrons makes it possible for us to do this podcast every other week, and contribute original content to this website each and every week.  Any interest in becoming our 73rd patron? Our 74th or 75th?  Please check out the link above and consider!

Podcast is available on iTunes (or should be shortly), on our trusty RSS feed, via the player above, or for download via this handy link:

And because Al Kennedy asked us to months ago, we’ve just submitted our feed to Stitcher.  We will see if they kick us to the curb or not.

Okay.  So now I’m off to feel weirdly melancholic.  Do take care of yourselves, okay?